Behind the Revival of Panna’s Tigers

Conservation biologist Raghu Chundawat guided a spectacular revival of the tiger population in Panna National Park. The Rise and Fall of the Emerald Tigers is a detailed account of the effort 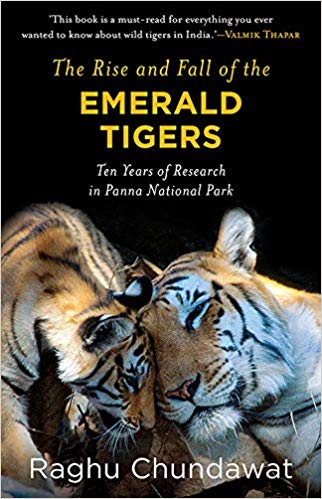 The year 2002 was the beginning of the decline of tigers in Panna. Their population plummeted from a healthy thirty-five to a mere eight or nine by early 2005. These were the most turbulent years for tigers — not only in Panna but in the entire subcontinent. A new market for tiger derivatives (tiger body parts ie bones, skins, teeth and claws, penis and whiskers) had developed and demand for tiger skins in Tibet skyrocketed. The resulting spurt in poaching coincided with a change in the management of Panna. A new field director, Sanjay Mukhariya, took charge along with his deputy, Ambade, in 2002.

By the end of 2003, tigers from the breeding population began to disappear, precipitating a grave crisis. Between 2002 and 2005, as a result of a series of mortalities, we saw frequent changeovers of the males which did not help population recovery at all. Changeover of dominant males is a natural phenomenon in tiger society, where a dominant male is replaced by a new male. In a stable population, male tenure as a dominant individual can last for five-six years. Frequent changeovers (due to poaching) can create stress and increase the risk of infanticide (by new males) that can further reduce the reproductive success of the population. F-120 lost her second litter at the beginning of 2001 due to a suspected infanticide by Hairy Foot. But he also did not survive long after his new set of cubs were born. As mentioned earlier, his carcass was found in the early monsoon of 2003 in completely unnatural circumstances. But even before this, F-120 and her cubs had perished. She was found dead, caught in a poacher’s snare, in December 2002. We had already lost another breeding female, F-111, who had disappeared in the late monsoon of 2002. Between 2003 and late 2004 more tigers were lost, including the breeding females of the Amdar, Gata and Nararan areas along with F-113.

Such mortalities had an extremely serious impact on the population, which never recovered afterwards. In the subsequent years, the lack of cub survival indicated the dire situation of the Panna tigers. There was, for a moment, one ray of hope. One of the Amdar tigress’s female cubs established her territory in her natal area. We had known this young female since March 2002, when she was first photographed with her mother. At that time, she was about 10–12 months old. But then, our research permission was unceremoniously withdrawn in April 2004 and, prohibited from entering the Reserve, our monitoring came to a complete halt. However, we were able to return briefly for a few weeks between February and March 2005, and at this time we found the Amdar daughter raising a litter of two cubs.

By March 2005, there was evidence of only three other females — the now old tigress Baavan, one female cub from her fourth and last surviving litter, and Amdar’s daughter with a litter of two cubs (sex unknown). At the same time, there were three males we knew —Madla, Broken Tooth and Baavan’s male cub. Their movements overlapped completely. In the brief period during February and March 2005 when we were allowed into the park, we found that over twenty of the tigers that we had known, were missing. Baavan’s radio-collar continued to transmit signals up to May 2005. Since her last litter in September 2001, we found no evidence of cubs but our intermittent monitoring of Baavan suggested that she may have given birth twice. We had only been allowed to work for a few weeks before our permissions expired, but we compiled the information we had gathered about the missing tigers into a detailed report titled ‘The Missing Tigers of Panna’ (2005) and submitted it to the Project Tiger authorities. The report recorded the possible loss of over twenty tigers from our intensive study area in Panna in the past year-and-a-half with photographic evidence to confirm their identity.

Instead of looking into the reasons for the disappearances and taking action to protect the few remaining tigers, the Reserve management set out to prove our information wrong and assured everyone that no such problems existed. They conducted a ‘special census’ to discredit our report, counting thirty-four tigers once again. They publicly announced a figure before the census had even taken place! The census figure given slightly exceeded the Director’s declaration and the previous census number. According to them, nothing had changed and our report was merely an act to malign the authorities. The WII was then asked to conduct another assessment of the tiger population using a camera capture-recapture survey.

The WII survey was conducted in early 2006 and reported a range of fifteen to thirty-five tigers; this was the estimate from their camera trap photographs that captured only the same seven individuals we knew existed. This included the Amdar daughter with one of her two cubs, Baavan the old lady, Baavan’s daughter from her fourth litter, Madla (M-125), Broken Tooth and Baavan’s male cub. Among these seven tigers, two — Baavan and the dominant male Madla — were past their prime and Baavan’s cub had yet to reach breeding age. So our only hope was the young Amdar female and Baavan’s female cub from her fourth litter. Broken Tooth and Baavan’s male cub (from her third litter) were sighted all over the Reserve.

It seemed as if everything was conspiring against the tigers of Panna. Even before the WII census (‘camera trapping’) results were compiled, there was another rude shock. The one ray of hope for the future of Panna tigers, the Amdar daughter, along with her two cubs, was found dead in May 2006. Forensic reports confirmed that the deaths were due to poisoning. With this loss, hopes for a recovery dropped to nearly zero. The chances of Baavan’s cub surviving long enough to breed in such a situation were extremely slim.

These were very traumatic times for us but we continued to monitor the situation from outside—after being barred from the Reserve — for the next few months. By now, Baavan was ranging over an area that was three to four times as large as her original range; there was no pattern in the males’ movements either as they were all frequently sighted in the same area. We continued to gather information by visiting the Reserve regularly as tourists (since we were not allowed in as researchers), and from records and interviews with the other regular visitors. We kept a detailed record of each sighting by other visitors. By early 2008, there had been no confirmed reports of a female tiger in the Reserve for almost a year, and the only sign of tiger presence at all was that of Baavan’s male cub—sighted occasionally by the elephant patrol. The authorities kept coming up with unconfirmed accounts of females sighted with cubs in the Reserve and in the surrounding areas as well but presented no evidence of this. Sadly, no one paid attention to our reports and the management’s narrative of continued tiger presence in the park remained prevalent.

Actually, the crash of tiger population of Panna had been faster than its recovery. In just a few months during 2003–04, we had lost a significant number of tigers to poaching. The loss of the breeding population gave little chance for recovery, especially when the management failed to take any steps to prevent further decline. I discuss the reasons for this decline and how it happened in the penultimate chapter — why the tigers of the dry forests of Panna were so particularly vulnerable, and how it could have been reversed.

It seemed that the mortalities in 2003–04 were the main trigger that shattered the entire social structure. Instability reigned high, causing other problems and driving this population into a deep vortex of ‘small population syndrome’ (Soule, 1986). The population was not only vulnerable to poaching but to extinction threats specific to small populations. These threats that operate on small populations, of demographic (biased sex ratios and high mortality rates), stochastic (disease and floods) or genetic (inbreeding) origin, are far more difficult to understand and arrest than human-induced threats. We have yet to develop a complete understanding of how and when they can wipe out a population. Unfortunately, the tiger population of Panna had reached that critical point-of-no-return by the end of 2004. Tigers are a highly resilient species but, at this stage, the odds against their recovery without outside intervention were very high.

After the extinction, tigers were re-introduced to Panna from neighbouring tiger Reserves —three females in 2009 and later four more over the year, including one male. Over the last seven years, the population has recovered to the 2002 numbers. Tigers can reproduce very fast, not only in Panna, but across different landscapes. There are several examples to confirm this. Tigers require just a little bit of protection and a suitable environment to show their amazing resilience (Sunquist et al., 1999). Unfortunately, these rapid recoveries are not documented well scientifically. Some of this knowledge comes from hunting records where scores of tigers were hunted repeatedly in the same area, year after year. Some of it comes from two studies— one conducted by Sankhala (1978) and the other by Schaller (1967). More recently, we had seen how the tiger population bounced back in Ranthambhore after the poaching debacle of 1993–94. I remember spending over two months there at the time and seeing a tiger only twice, whereas earlier visitors sometimes spotted 10 tigers in a single drive. But in just a few years, with better protection, the tiger population bounced back very quickly. More recently, there have been similar recoveries in Tadoba and Pench.

Excerpted with permission from The Rise and Fall of the Emerald Tigers, published by Speaking Tiger, 2018. Pages: 356. Price: Rs 432.