In A Tigress Called Machhli, Supriya Sehgal shares fascinating stories of various animals that inhabit our forests, cities, and backyards — including a curious tale of a village in Karnataka that is taken over by cackling storks 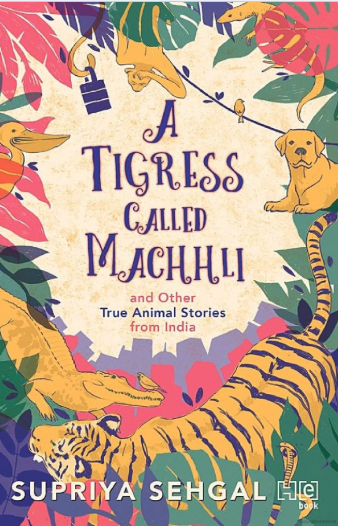 Hurry! If you don’t run for cover fast, you’re going to be blessed by a shower of white poo! That’s what happened to me . . . while the threat of a gooey mess on the crown loomed above, it was also tempting to keep looking up to see the makers of this bright white dump. No, it wasn’t a public toilet hanging mid-air. It was… hundreds, maybe thousands of painted storks and spot-billed pelicans occupying the trees and rooftops of Kokkare Bellur, a small village, 85 kilometres from Bengaluru.

The sound of birds welcomed me long before I could even see them. ‘Cackle, caw, cackle,’ they went. To someone who doesn’t live here, the endless chatter of birds can seem strange and the palms of one’s hands quickly go to the ears to cut down the noise. I did the same. But everyone else in the village seemed to be walking around in soundproof bubbles!

The ear-splitting orchestra never seemed to take a break. The ears got sick of the noise, but the eyes had a striking spectacle to see. Every tall structure ­­— tree, houses and towers — was completely covered with these large white birds. In fact, at first glance, it seemed like there has been heavy snowfall in the village. Some of the villagers saw my bewildered face and started laughing. Whether you talk to the young boys striking sixes on their makeshift wooden bats, the elders sitting on the steps of their homes or the women tending the crops, no one can explain clearly why there is a veil of white birds on their homes and on the trees in Kokkare Bellur. Neither does anyone know when this rather strange phenomenon first began. The answer to the most obvious question: ‘What is going on here?’ is usually this explanation.

According to legend, hundreds of years ago, a large group of pelicans and storks arrived at a village close by and perched on the rooftops and the trees. They came swooping down, one after the other and took over every inch of the roofs and trees, especially the tamarind trees. They were migratory flocks, appearing in winters and leaving by March, when the weather got warmer. During these months, the weather was perfect for laying eggs and bringing up their young ones, swelling the population to almost double. The village was located close to a large lake that was filled with big and small fish. It was the perfect spot for the birds — high-perched homes to lay eggs and take care of the hatchlings,  and a feeding ground at hand. The villagers did not mind and got used to sharing their home with these beautiful large avian friends.

This went on for years. But then a famine hit the village, and everyone moved to a different spot, where there was no lake, and certainly no fish. Everyone thought that their relationship with the birds was over and they wouldn’t return the next season. But then a surprise arrived the next winter in the form of flapping wings. The flock was back! The birds had loyally followed their human friends to their new location! The village came to be known as ‘Kokkare Bellur’ – or ‘Bird Village.’ Everyone was delighted to be adopted by the birds and believed that they were protectors sent by god. As long as the birds were there, no harm would fall upon the village. Till date, these birds build nests and live in the village almost all year round, without an abundant supply of either food or water. The locals continue to be surprised, but love the fact that this old friendship is still strong. But not everyone was happy with the presence of these creatures. Flapping wings, loud throaty sounds and incessant droppings were considered a menace by a small group of young men. Numerous village meetings were held to propose that the birds should be chased out. People were losing sleep, kids found it distracting to study, cows would reply to the cackle with extra ‘moos’, goats looked nervous and the courtyards needed to be cleaned ALL THE TIME. The protestors were determined to shoo the birds away. Someone suggested crackers. Others thought an airgun would be better. The elders were not happy, and tried to stop them. But this group did not relent.

Claps, air-gun shots and crackers – everything was used. But the birds turned a deaf ear – they probably couldn’t even hear the crackers above their own voices – and continued to live and build nests in the trees around. The tussle between bird and man would have ended badly had it not been for the elders stepping in once again and asking for a meeting. They explained to the youngsters how bird poo was rich in minerals and chemicals and could be used as manure in the fields. They also insisted that damaging their long-standing relationship with the birds around would bring bad luck to the entire village.

Finally, the protestors calmed down. After all, nobody wants bad luck! The birds stayed. After a few months, everyone got used to the constant yammering and cawing. In fact, the sight of their white-topped homes and trees eventually made them happy. To this day, the people of Kokkare Bellur feel that no harm can come upon them, as long as the birds are there to watch over them. And visitors like me? They get a chance to marvel at this extraordinary friendship between birds and humans!

Maybe this is some sort of divine blessing, or maybe it was the brainchild of one of the elders who thought this would be a great conservation move. Regardless, today Kokkare Bellur is known as the blessed village of Karnataka.