How a Group of Men Saved Elephants by Talking to Them

In The Vanishing, wildlife writer and conservationist, Prerna Singh Bindra speaks of critical challenges that confront India’s wildlife, interspersed with a few stories of resistance and hope 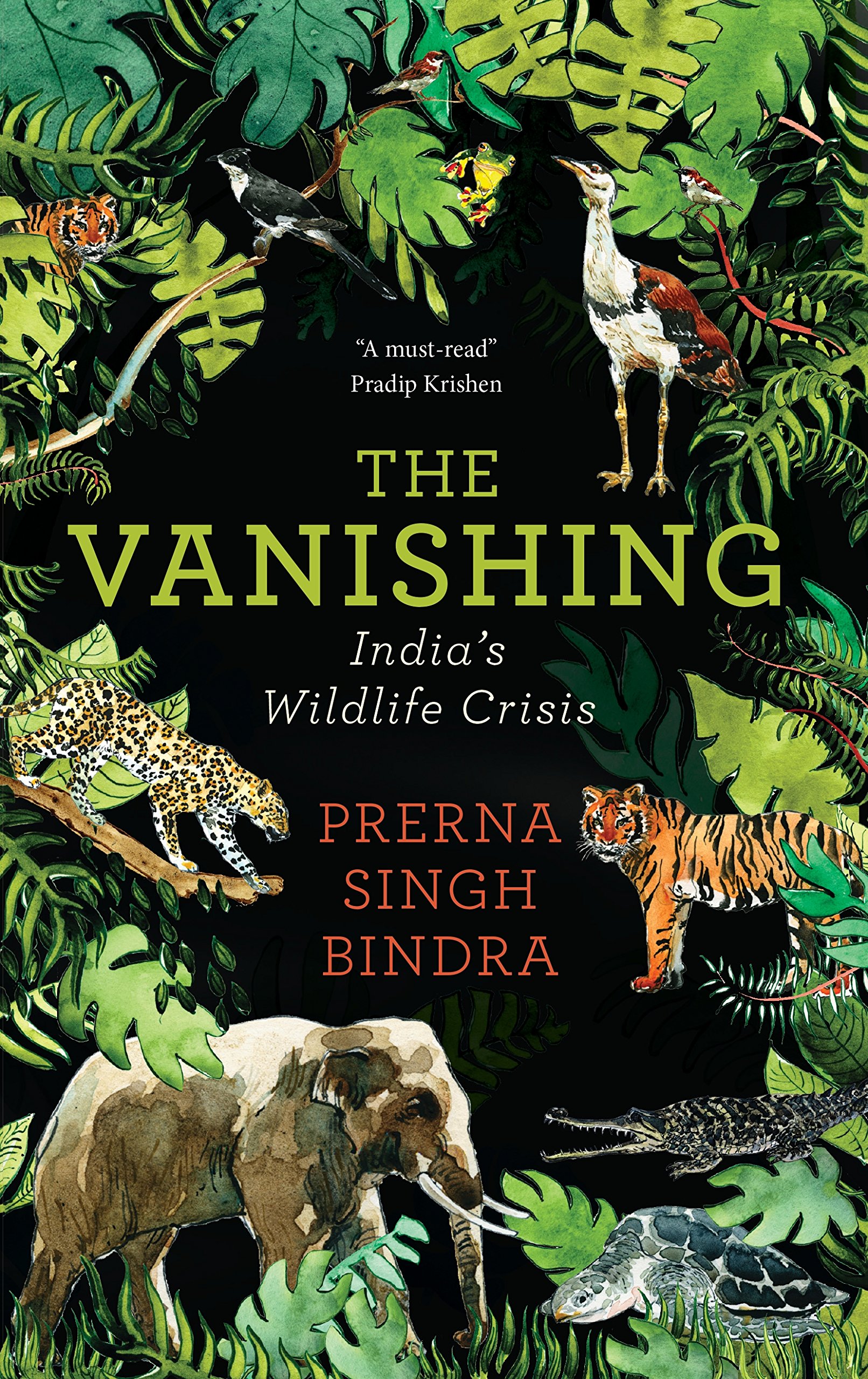 The Elephant Whisperers of Athgarh

‘Raha, Raha, Raha!’ urged Panchanan Nayak, a short, wiry man whose voice rose barely above a hoarse whisper — yet his sense of urgency to ‘stop’ reached the three-ton, eight-foot tall cow elephant. She ground to a halt then extended her trunk to encircle her young son to contain him. She is a wild elephant, even if she goes by the name of ‘Lakshmi’. She is the matriarch of a herd of twenty-five-odd elephants who followed her lead, and paused — impatiently — just short of the busy Bhubaneswar–Athgarh highway and the paddy fields beyond.

It was surreal: twenty-five wild elephants contained in their path by Panchanan or Panchu as he is known and his three colleagues: Sanatan Nayak, Dileep Sahu, Santosh Sahu. Together they form the ‘Athgarh Elephant-conflict Mitigation Squad’ who try to keep people, their crops and the elephants safe by influencing their movements. Not by force, no, of course not. Not by blank-firing guns, bursting firecrackers, burning mashals (live torches) to drive away harried animals — which are the methods usually deployed across India to contain or get rid of ‘conflict elephants’ as they enter towns, bazaars, fields — places that were once forests that these animals lived in, and migrated through seeking water, food or avoiding monsoon flooding.

Calling this group a ‘squad’ is a bit grandiose. Panchu and his gang, a rag-tag group of daily wagers employed by the forest department and armed with nothing more than lathis, and mobile phones to coordinate their movements, call in forest staff reinforcements, or summon the police to control crowds that form when elephants enter human settlements, crowds that all too frequently turn into angry mobs.

The elephants had approached the road in the late afternoon, a time when traffic was heavy, children were racing home from school, and cowherds were herding the cattle back to their paddocks. People were still at work in the fields and milling around doing brisk business in the dhabas and shops that line the highway. On the edge of the road, barely hidden within a fragment of forest, the elephants were restless. On the other side of the road was one of the few sources of water within this dry landscape, and the paddy was ready for harvest—offering an easy, power-packed snack for the pachyderms.

The scraps of patchy forests that the elephants are confined to do not provide enough food to sustain them.

These elephants are refugees, driven away from Chandaka, a sanctuary on the outskirts of Bhubaneswar, the capital of Odisha, in India’s eastern coast. Chandaka was once connected to the Kapilas forests further north. Westward along the left bank of the Mahanadi, the forests extended towards Narsinghpur, and into what is today the Satkosia Tiger Reserve and Mahanadi Elephant Reserve.

Once upon a time the elephants traversed this entire landscape. Ancient instincts and knowledge dictate their movements, decide the paths they take. They know they must move to strengthen their bloodlines, and not to overburden a forest—given that an elephant may consume about two quintals of plants a day. But these animals are not just copious consumers. Elephants are the gardeners of the forest, shaping the ecosystem they thrive in. They disperse seeds as they travel, smartly packaged in fodder—dung— sprouting new plants, contributing, in a major way, to a forest’s regeneration and plant diversity. Unlike other seed dispensers— say, birds or monkeys, who have smaller ranges, elephants travel vast distances, sometimes planting seeds far from the parent tree. In one study, scientists in the Democratic Republic of Congo found that forest elephants disperse about 345 seeds per day from ninety- six different species, typically more than 1 km from parent trees and shrubs—and as far as 54 km. Confining elephants to small islands and pushing them to feed in fields will slowly but surely wither a forest, which is now happening in Chandaka.

Chandaka lies at the northern tip of the Eastern Ghats, a discontinuous range of biodiverse mountains that run along India’s eastern coast. Chandaka had tigers once, with the last resident recorded in 1967. Even as the big cat vanished, the forest harboured other rare species—elephants, leopards, sloth bears, pangolin and the rusty-spotted cat, the smallest wild cat in India. The region was protected as the Chandaka–Dampara Wildlife Sanctuary in 1982, mainly to protect the more than eighty elephants who roamed the 190 sq km reserve until 2004 — and to serve as Bhubaneswar’s green lungs.

Bhubaneswar has grown rapidly, changing the dynamics of both the city and the forest. An ill-planned expansion is transforming

Bhubaneswar from a quaint, post-Independence capital into an urban conglomerate that could one day replace Kolkata as the ‘hub of the east’. Gated colonies, large institutes, tech parks, colleges and malls have sprouted, decimating and engulfing the sanctuary and the surrounding forests.

There have long been problems within the sanctuary itself. Chandaka was neglected and mismanaged, overgrazed by cattle, exploited for firewood, encroached on by village settlements. From a densely wooded, mixed sal forest, it has now been reduced to a dry scrub forest with some bamboo. The encroachers were hostile to the animals and there were cases of elephants being shot. Aditya Chandra Panda, a Bhubaneswar-based conservationist recalls how the first wild elephant he had known—a one-tusked male named Ganesh, was killed. He has known the Chandaka–Athgarh elephants for over a decade. ‘All the big tuskers in Chandaka had names back then. Abhimanyu, Ganesh and Master Bull were legendary. Master Bull was an outsize animal who had tusks that even he struggled to carry, while Abhimanyu was foul tempered,’ he reminisces. Ganesh, on the other hand, was calm, introverted and a very tolerant sort of animal, ‘particularly towards curious young naturalists like me, who spent hours just watching him’, says Aditya adding that Ganesh was shot dead a few years after in 2008, allegedly by a villager whose paddy he was feeding on. It hit Aditya hard, and spurred him to take up their cause, as the city swallowed the sanctuary, and wilderness turned into concrete, pushing the elephants out.

They raided fields, blundered into residential colonies and other human-occupied areas that not long before were forests. Crackers, shotguns, crowds, mobs and mayhem invariably followed wherever they went.

The desperate, bewildered elephants were on the run, hounded by mobs, harassed by hostile villagers. A few fell on the wayside: some from sheer exhaustion, a few were poisoned; others electrocuted. Six, including two calves, were crushed by a speeding train in December 2012 as they travelled southwards toward Chilika. Lakshmi’s herd waded through the river Mahanadi, moved through towns, villages, industrial areas and crossed highways to reach Athgarh.

The elephants were chased away from their home, chased everywhere, hemmed in scraps of forest. Wild, cornered, desperate. Pushed into conflict with man, they have retaliated by killing about ten people since 2010. Yet, they ‘listen’, and respond to the ‘squad’, who are literally, their shadow.

Why? I ask the trackers.

The answer is as simple as it’s complicated: ‘The elephants know we help them,’ they say.

When the elephants are harangued by a mob, the trackers lead them to safety, freeing them of the terror only a trapped wild creature knows. If the elephants are near railway tracks, the squad warns the station master at the Raj Athgarh station who then signals trains to slow down. They have notified authorities at power utilities of sagging power cables: running into electrical lines poses serious danger to elephants. Death may be accidental, but avoidable, if simple measures are taken. Occasionally, it is deliberate poaching or retaliatory killing by villagers who set high voltage live wire traps or erect electrified fences.

In Odisha alone, electrocution has killed over 150 elephants in the last fifteen years, according to an analysis of forest department records and newspaper reports by the Wildlife Society of Orissa. Three months after I visited them (January 2016), two elephants—a mother and her calf—were electrocuted.

Panchu and his group once rescued Lakshmi’s five-year-old calf, Nungura (‘the one who teases’), when he fell into an open well. He is a bit of brat, naughty, curious, whimsical, ‘actually not unlike my own son, Pintu,’ mutters Panchu as his mates holler in glee. The calf whimpered and shrieked as he flailed in the depths, with the herd desperately trying, and failing to lift him out with their trunks. The inevitable crowd gathered. Curious onlookers who tried to get close to watch the tamasha were charged at by an enraged, distressed Lakshmi, some moving particularly close, unmindful, even mocking of the animals. Many held mobile phones aloft, clicking selfies—not an uncommon occurrence these days in volatile situations. Lakshmi charged, stopping just short of the crowd. She bellowed in warning, once, twice, thrice; maybe more, but heedless, the men jostled ahead, peering into the well. Tormented by the crowd, and terrified for her calf, Lakshmi struck, killing one man.

The situation was fast becoming explosive when the squad arrived. They admitted to a brief moment of fear—after all Lakshmi had just killed a human—before it flickered out. ‘The elephants are not killers,’ said Panchu. ‘They will not harm intentionally. We knew it was only because she was provoked, cornered, and like all mothers, fiercely protective.’ So, they talked to the distraught Lakshmi, calming her, reassuring her, ‘that we would get her child back. But she had to let us do our job,’ said Panchu.

The matriarch moved away, a silent sentinel, and with the deployment of earthmovers, the calf was pulled from the well and reunited with the herd. In the alien, inimical world that the elephants have been tossed into, they know that they have these men on their side.

However, this man–animal relationship is taking a toll on the trackers. Their affinity for the elephants has alienated them from the other village folk, at times, even their families, who bear them a grudge for crops damaged by ‘their’ animals, as well as the havoc they create. Sanatan, another member of the squad, says his father is fed up at being with odds with his community, and fears for his son—with his strange job, and at odds with his people. Besides he worries, ‘who will marry my son who chases elephants?’ He offered to pay Sanatan the 200 or so rupees that he gets as his daily wages, if he left the job, and the elephants!

But Sanatan won’t leave his job. Like the rest of the squad, for better or for worse, he feels bonded to the pachyderms.