“Elephant” whispered our safari vehicle driver, braking suddenly.  As I lurched forward, I spotted a grey hulk blending in with the trees. My fellow passengers and I would have missed it altogether had we relied on our untrained eyes. Even its flapping ears hadn’t given it away. When it realised we had spotted it, the five-tonne giant took a step back into the foliage. This representative of the largest species on the Indian subcontinent, with strength to match, was a shrinking violet. Our vehicle rolled forward while we kept our eyes on the behemoth. Only after we were nearly out of sight did the tusker cross the road.

Bull elephants are reclusive, enjoying solo meals, trekking alone, fascinated by their own company. When they run into herds, they socialise and bond briefly before heading off on their own. But they aren’t lone wolves throughout their lives. They are born and grow up in a supportive family, a sisterhood of their mother, aunts, cousins, and sisters. After they turn ten, the mollycoddling ends and they are kicked out to face the big world on their own. From being in constant contact with others, they switch to a lonesome lifestyle. Although they are sexually mature at this age, they won’t experience the full force of musth for about 15 more years. 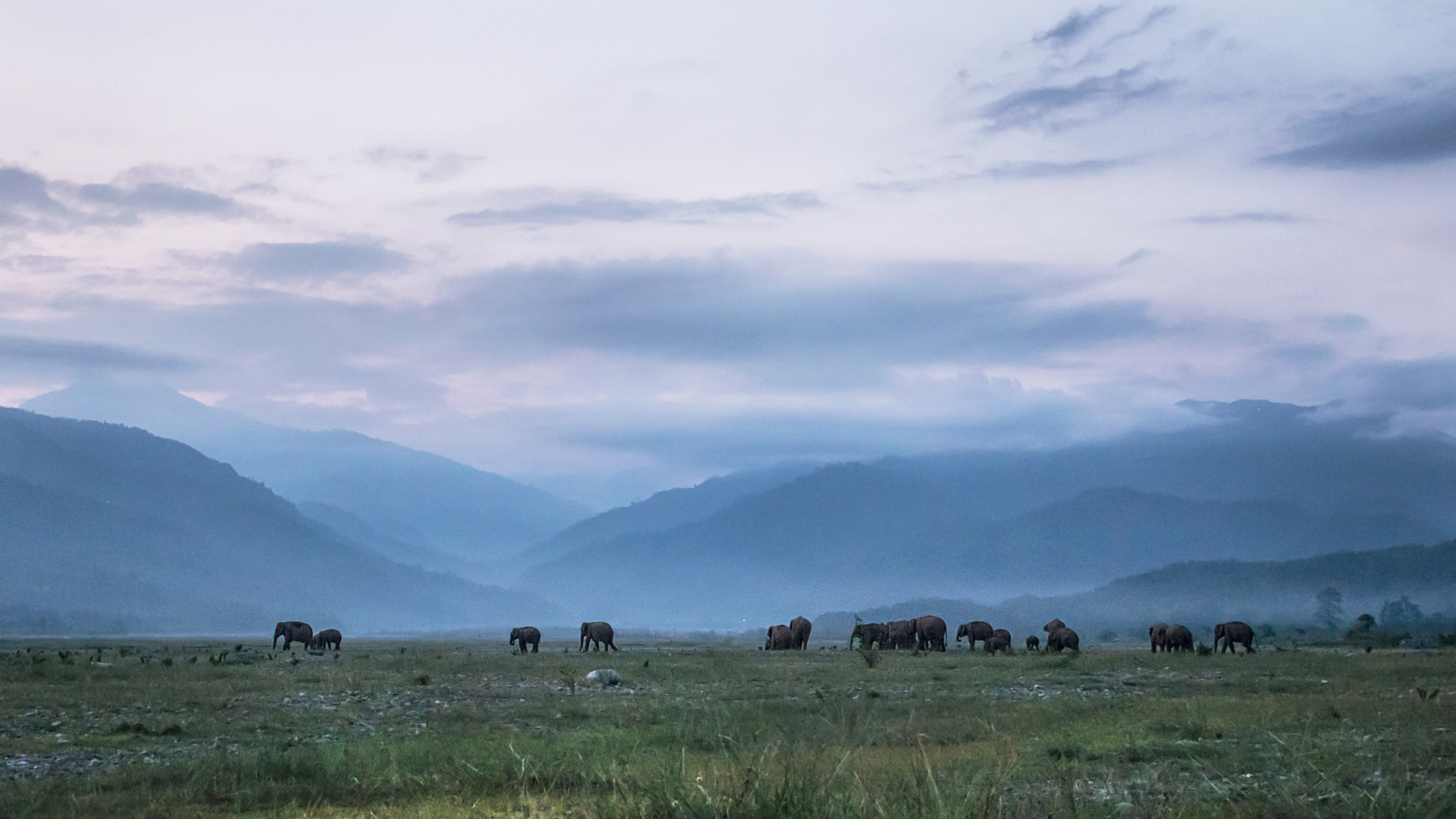 Bulls occasionally socialise with family herds when they meet. This herd was seen on the Mechi riverside, on Indo-Nepal border. Photo: Avijan Saha

When they are 25 years old, these recluses hanker for female companionship. The upsurge in testosterone turns them into sex-obsessed hulks that are ornery toward other males. During courtship, a bull doesn’t hang out only with a prospective mate. Since females live with their families, the males are forced to socialise with these relatives. Once they have sown their oats, however, they return to being loners. In an ideal world, they’d go through life in the forest minding their own business like that shy elephant we’d spotted by the road on our safari.

Some bulls live dangerously once they develop a taste for crops. They lurk on the edges of forests until darkness falls. Despite their size, elephants can be surprisingly silent and light on their feet as they venture into adjoining fields. This easy way of making a living is not without its costs. Most farmers aren’t pushovers and will protect their livelihoods, bursting firecrackers, homemade explosives, and shooting firearms at intruding elephants. The giants suffer stress, injuries, and even death, but the juicy richness of cultivated plants is good for their health. The better their physical well-being, the longer the musth lasts, leading to more matings and offspring. With all the swagger of high rollers, the bulls take great risks for handsome returns.

Exploiting crops is tricky for solitary inexperienced youngsters. More often than not, they become understudies to mature males. In the perilous business of dodging humans, two, or even three, is company. As long as the older bull is not in musth, the adolescents are safe. But if he is in his cranky phase, they better watch out. The apprentices learn by watching where to stand still, when to enter fields, and how to be quiet. After the harvest, mentors and trainees go their separate ways.

A bull in musth seeks out receptive mates and stays with their herds (left). This group was seen crossing the Ramganga River in Jim Corbett National Park, Uttarakhand. Bull elephants (right) like Kanchera, a tusker, in his habitat of Jaldapara west, in West Bengal, are largely solitary giants (right). Photo: Arindam Bhattacharya (left), Avijan Saha (right)

Where forests are reduced to a patchwork of plantations and slivers of woodland, young bull elephants have come up with an alternative strategy. The first I heard of it was in the district of Keonjhar, Orissa, a dangerous neighbourhood with lots of people, intensive agriculture, and pockmarked with mines. Adolescent male elephants could be killed on the roads, electrocuted by illegal fences hooked up to the mains, or shot when filling their bellies in the fields.

To learn the art of survival by trial and error is risky. The adolescent elephants ought to find the nearest mature bull and become his flunkies. But they seem to have vetoed that practice here. Who’d want to hang out with an uncle who may turn into a volatile, grumpy bully? Instead, they seek the company of other young bulls. By banding together and forming formidable peer groups, they have taken to behaving like small, vulnerable animals despite their size. Not only do the novices find security in numbers, but they also learn from each other.

In a hamlet in Keonjhar, I witnessed a recently widowed woman, with tears streaming down her face, squatting with her two small children outside her hut, staring at a tiny plot. It looked like a group of giants had trampled and pummelled her crop that was turning yellow and brown. Desiccated football-sized balls of elephant dung seemed to add insult to injury. A month earlier, her husband had heard a noise outside and fearing it might be a thief, had gone to investigate in the dark, said her neighbour. An elephant that had been stuffing itself nearby had struck hard with its trunk, killing him.

“It wasn’t a single elephant,” the man said. “It was part of a maljuria.”

“Maljuria — a gang of young male elephants. About four of them.”

I would soon hear the term maljuria and the group’s behaviour described in other parts of Orissa and West Bengal as well. Villagers said such groups rove the countryside with little fear of people, going where they will and eating what they please. When such parties gatecrash a field, irate farmers cannot single out an individual. Like other all-male affiliations, the ones in eastern India also end with the crop season.

However, in the districts of Tumkur, Ramanagara, and Krishnagiri in Karnataka, such gangs don’t disband, and have instead coalesced for the long-term. Diced by a maze of slick highways, canals, and imploded by quarries, these areas are fraught with danger. In 15 months, between February 2016 and December 2017, 10 elephants and 10 humans died in confrontations with each other.

To cope with these threats, the giants form groups often with as many as 12 members, says Nishant Srinivasaiah, of the National Institute of Advanced Studies, Bengaluru. One extraordinary fraternity of 25 stayed together for two days. Such a large gathering of males is unprecedented, and the fact they sojourned for a couple of days is a singular event. The difficult circumstances force them to be cordial with other males in their band. Unheard of 20 years ago, durable all-male herds are a remarkable new development in their social lives and a bane of the area’s farmers.

Every member of this new form of maljuria is well-fed, and their community living does wonders for their mental health. They have so much of a good thing going that instead of dispersing after a season, they continue to be part of these bachelor groups for several years. They swap the comfort of their families for an elephantine brotherhood. Srinivasaiah says some of these bulls haven’t seen a female elephant for five years.

Once the youngsters reach maturity, they go into full-blown musth. They lose their conviviality towards their peers and become loners, experts now in the art of making babies and dodging humans.

A city girl gone feral, she is the author of two volumes of My Husband and Other Animals.