In this remote, high-altitude plateau of Ladakh, inhabited by Changpa nomads, a worrying transformation of habitat, climate, and lifestyle is under way

Since I left the bustling streets of Leh, the rain had been a constant companion. In July 2019, in four days of driving through the 4000-sq-km expanse that constitutes the Changthang Wildlife Sanctuary, I had seen every kind of shower. A fine, even drizzle every evening made Tso Kar’s marshlands even clumpier. A sudden hailstorm near Mahe Bridge turned the cemented highway into a red river in minutes. In Han Le, close to the Indian border with Tibet, the sky seemed to shower twice a day.

But rain, it appears, is new to Changthang. Bounded in the southwest by the impossibly steep sandstone cliffs of the Zanskar range, and in the northwest by the massive granite peaks of the Ladakh Range, Changthang is the highest plateau in India. It is also a cold desert and a rain shadow area. Mountains created by tectonic movements over some 50 million years, ranging from dusty beige to deep purple, stand guard over a flat, often sandy terrain. Water here traditionally meant the snowmelt from these mountains, which fed rivers and streams, as well as the marshy wetlands that pockmark the plateau.

“It never used to rain like this before,” someone will tell you every time it begins to pelt. But the last two decades have seen increasing rain and correspondingly less snow in Ladakh. Hotter, longer summers, and faster melting glaciers are among the other symptoms of climate change that ought to be cause for alarm and activism. In 2010, flash floods and landslides killed over 200 people in the capital city of Leh.

That scale of calamity has thankfully not recurred since. Still, it is clear that environmental change is swiftly altering the face of the region. The original architecture of Changthang, for instance, used stone, clay and wood: material perfectly tailored to a cold desert. The traditional packed mud or stone buildings were built with wooden roofs that could withstand heavy snowfall. But they cannot keep out the increasingly frequent rain. Village homes and monasteries alike now face erosion and seepage problems.

Walking through Han Le, or any Changthang village, it is unsurprising that anyone who can afford to is switching to concrete or tin, at least for their roofs. One community is not included in that number: the nomadic Changpa pastoralists. For them, home still remains what it has been for thousands of years: the rebo, a large tent traditionally hand-spun out of yak wool. 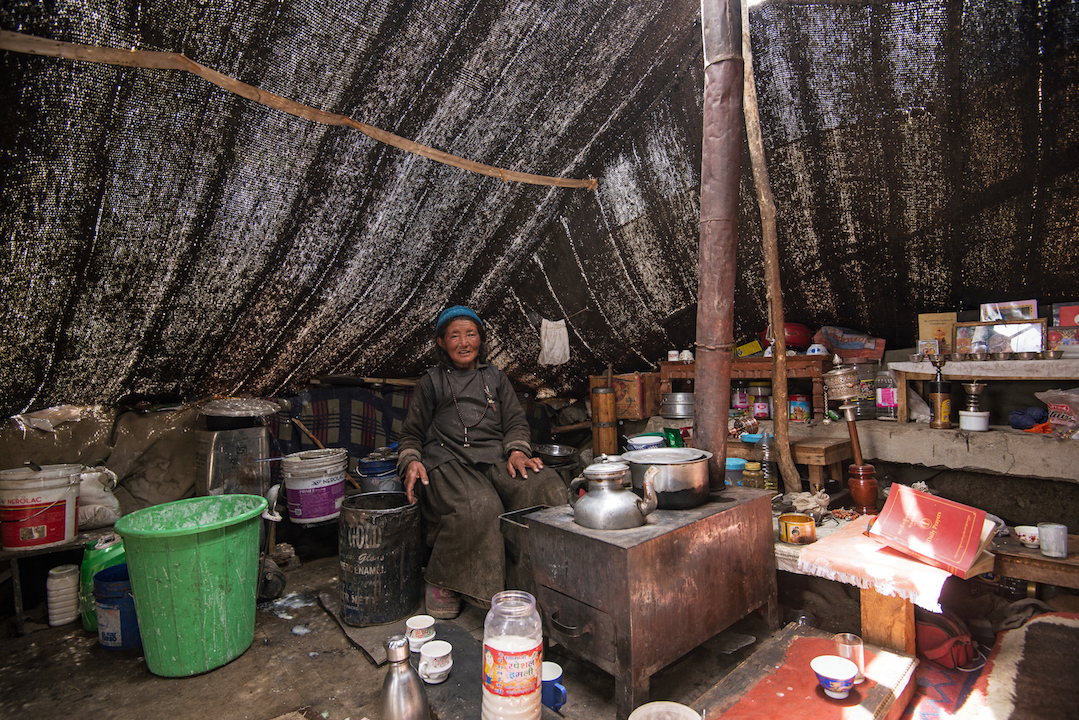 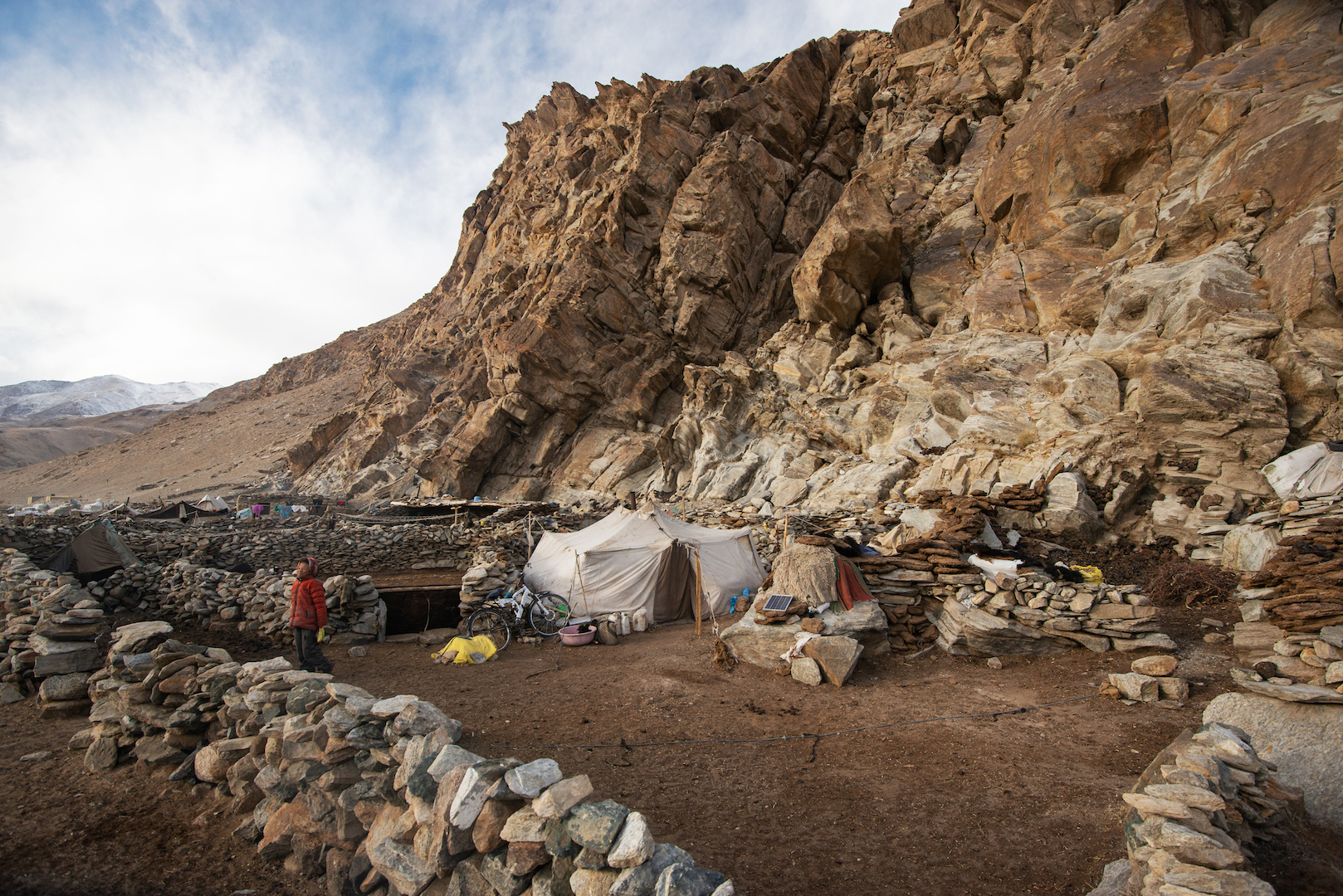 Changpas traditionally lived in rebos, large tents made of yak wool (left). Making these hand-spun, black tents was always a collective community effort that could take several months. Rebos were often passed down from generation to generation. In recent years, white canvas tents (right) have started replacing traditional ones, a sign of changing times. Photos: MV Shreeram Changthang is a vast, cold expanse of almost barren, exposed mountains covered in brownish gravel with patches of hardy grass and shrub. It’s not unusual, any more, for the day to start off sunny and then turn misty and foggy by afternoon. Photo: Saurabh Sawant

The Changpa presence, in many ways, is part of what makes the Changthang ecosystem fascinating — a human community as profoundly adapted to the cold desert as its wild creatures. But nothing is timeless. Over the centuries, some subsections of the Changpa settled down in permanent locations, creating villages which practice a combination of agriculture and pastoralism. Among the nomads, too, change is inevitable. Many of the rebos I passed during the seven-hour drive from Tso Kar to Han Le have supplemented the coarse black yak woollen fabric with patches of canvas or jute. Some have replaced it altogether, making tents of some artificial white material or camouflage fabric.

The use of military material is a sign of another huge presence in the region: the Indian army. Seasonal migration once took the Changpa across the whole Changthang Plateau, but their movements are now restricted to the small portion of it that lies in Ladakh. Most of Changthang — literally, ‘northern plateau’ — lies on the Chinese side. The Sino-Indian War of 1962 was followed by the establishment of several Indian and Chinese army posts, making the border impermeable. The Changpas’ traditional grazing grounds also “shrunk considerably after China captured some crucial winter pastures, including large portions of Skagjung, the key winter reserve pasture for the entire Changthang, in Kuyul area”, Tashi Morup reported in Down to Earth magazine in 2015. The largest human settlements in the Changthang are not Changpa villages or even Tibetan refugee settlements, but army outposts. These are the epicentre of new threats to local wildlife, such as growing gangs of free-ranging dogs, which find easy nourishment in the army’s waste, dumped unthinkingly.

In the wake of the abrogation of Article 370 in August 2019 and Ladakh’s new status as a Union Territory (with no legislature of its own), the army presence looks poised to become more visible and possibly more disruptive. On September 18, 2019 the Economic Times reported a “scuffle between Indian and Chinese troops on the northern bank of Pangong Tso”, followed by an unprecedented “massive integrated exercise in Eastern Ladakh” aimed at testing and improving the army’s war-fighting capabilities, involving “infantry, mechanised forces, T-72 tanks, with force multipliers such as artillery guns and Unmanned Aerial Vehicles… aviation assets [and] parajumping of troops.” The military exercise was named “Changthang”. 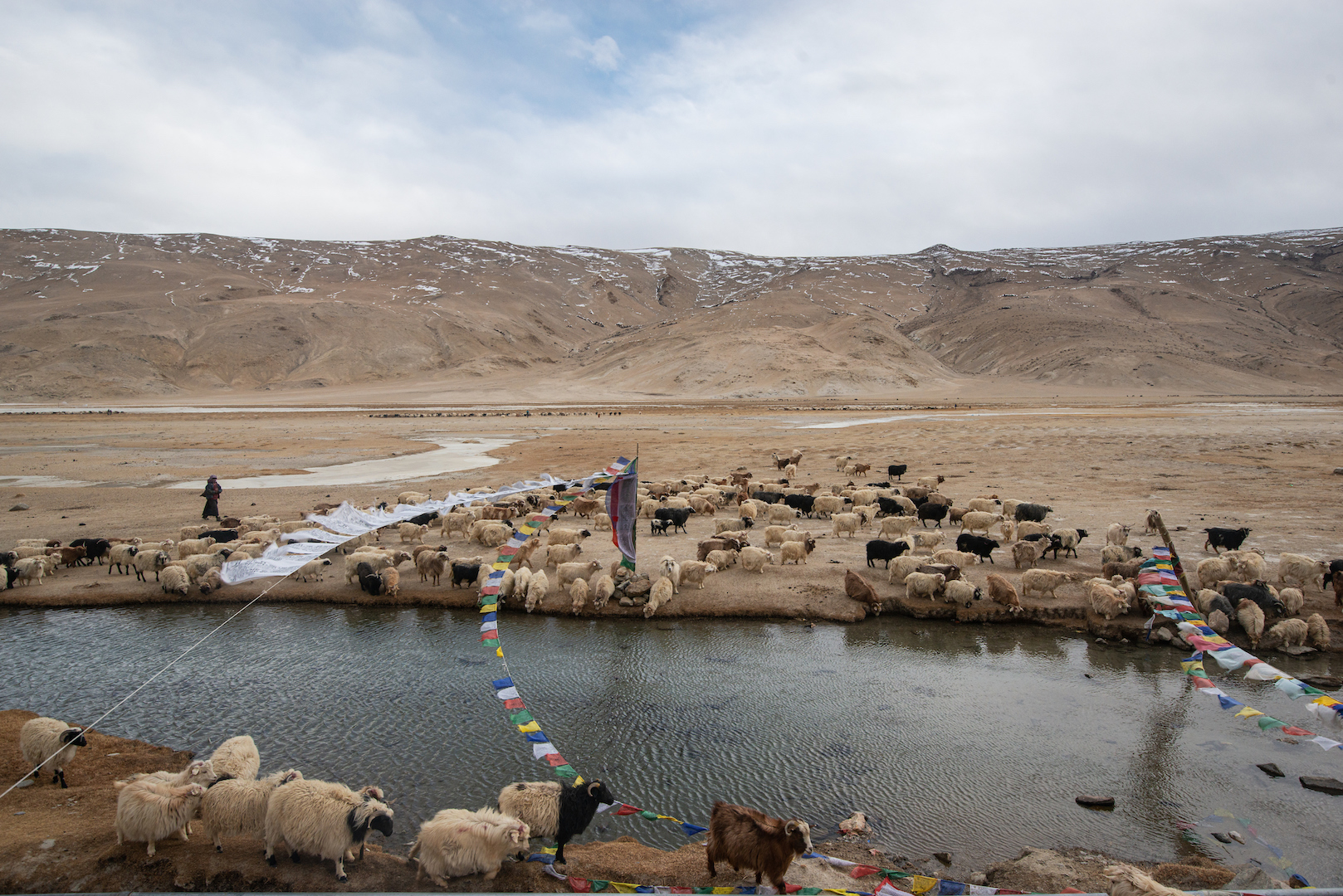 Though Changpa nomads are followers of Tibetan Buddhism they also worship local spirits. Animals form an integral part of their spiritual world, and navigate their link between the practical and the divine. Photo: MV Shreeram

The anthropologist Veena Bhasin, in her 2012 article ‘Life on an Edge among the Changpas of Changthang, Ladakh’, describes nomadic Changpas as usually having a couple of horses, used for riding between settlements or for visits to Buddhist gompas. In 2019, many rebos I saw also had a jeep or a least a motorbike parked outside. The Changpa still raise the same animals they always have: yaks, sheep, and goats. In mid-summer, the yaks had been taken to pasture in the upper reaches, perhaps by the men. What I did see was the occasional Changpa woman coming down a hill with a huge herd of Huniya sheep, raised for milk, meat, and wool, or I saw someone with two sheepdogs to round up a slightly smaller herd of Pashmina goats, source of the world-renowned baby-soft wool.

These domesticated animals share Changthang’s meagre grasslands with several ungulates (hoofed mammals), that are found nowhere else in India. Most common is the kiang or Tibetan wild ass, then comes the bharal or blue sheep, and the ibex. In the river valleys there are also the rare Tibetan urial (2,500 animals), the rarer argali (300-400 animals), and rarest of all, the gowa or Tibetan gazelle (less than 100 animals left). 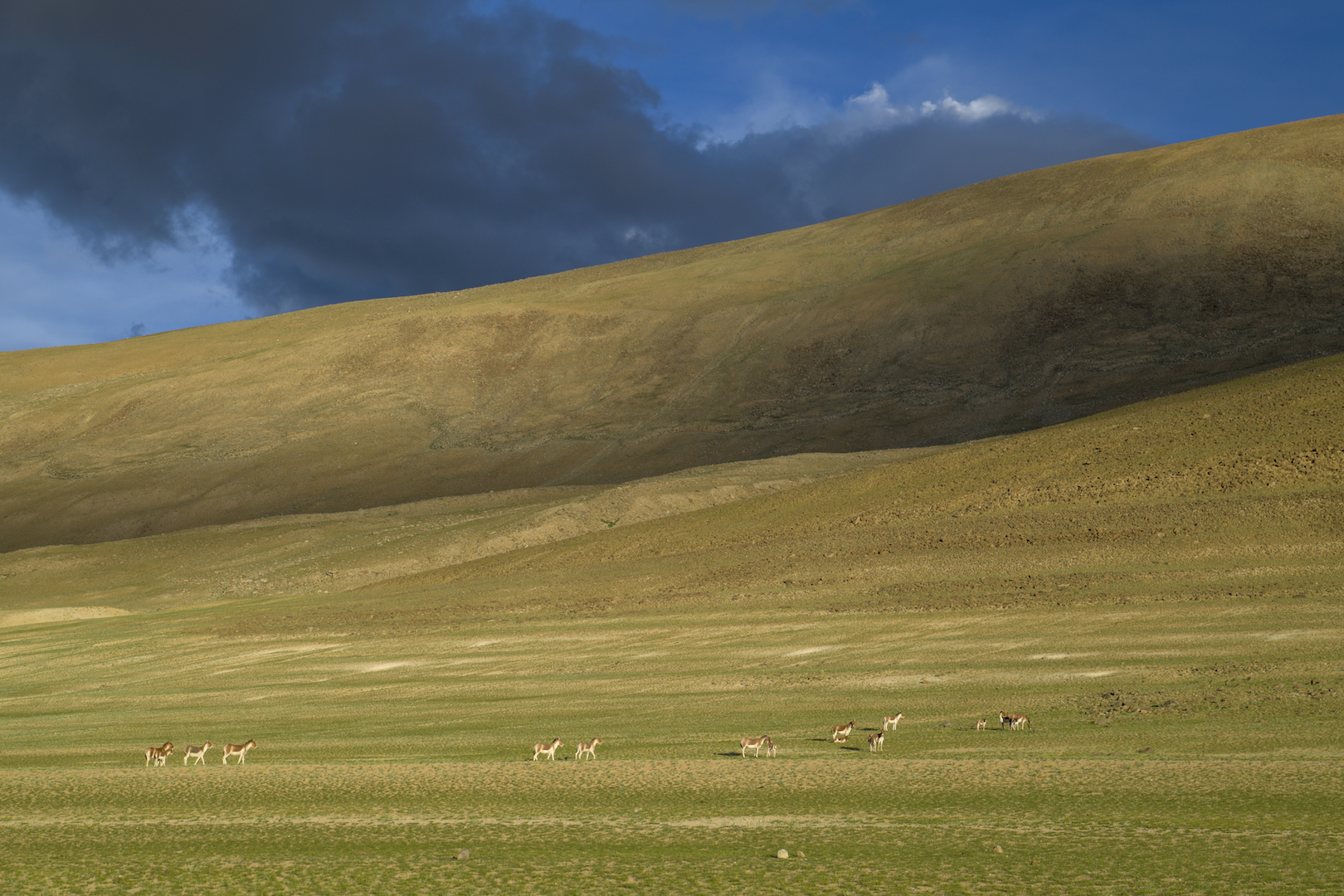 A herd of kiang or Tibetan wild ass roams the vast expanse of Changthang’s plains. The ungulate was once hunted for sport; however, ever since that practice was discontinued their numbers have grown. Photo: Saurabh Sawant

Two other ungulates — the musk deer and the Tibetan antelope (locally ‘tsos’ or ‘chiru’) — have sadly almost disappeared from Ladakh. They have been hunted down for things deemed precious by humans: musk, a waxy fragrant substance secreted by a gland in the male musk deer’s abdomen, and shahtoosh, underwool pulled from a dead antelope to make gossamer-light woollen shawls once seen as fit for royalty — and only banned after 2002.

Then there are the predators: red fox, Tibetan wolf, lynx, and snow leopard. They are not frequently seen, especially in summer. But the human settlements that punctuate Changthang’s otherwise eerie emptiness offer evidence that they aren’t just imaginary creatures that local mothers use to scare their children. Wolves and snow leopards are the goatherd’s worst enemy, confirmed Tshering Norzom, an old Changpa woman who invited us into her rebo, some 30 km outside Han Le. And more than once, on the outskirts of a village, we spotted a four-walled enclosure built out of rough slabs of grey granite with a goat carcass or two being gradually desiccated by the cold dry air — a wolf trap.

The declining numbers of wild ungulates in the wild mean that Changthang’s predators increasingly turn their attention to domesticated sheep or goats. According to a scat-based 2017 analysis by the scientists Madhu Chhetri, Moren Odden, and Per Wegge, 27 per cent of the snow leopard diet and 24 per cent of the Himalayan wolf diet is now livestock. It is no wonder then, that the local people aren’t quite as thrilled to see a snow leopard or a wolf as the urban visitor. “Within Ladakh,” claims the Snow Leopard Conservancy’s India Trust (SLC-IT) website, “retaliatory killing by villagers/farmers… remains the most important threat [to the snow leopard].” The SLC-IT’s efforts to reduce human-animal conflict have included building predator-proof corrals, creating a livestock insurance programme, and aiding locals to make homestays that will fetch them income from wildlife tourism.

Changthang looks, at first sight, like a landscape untouched by human hand. But even four days of traversing its freezing cold expanse is enough to realise that humans have a home here, having learnt to coexist with other inhabitants of this harsh wilderness. But that careful balance between humans and animals, built over centuries, can be easily destroyed. The region’s new UT status, allowing the Centre to make administrative policy through a nominated Lieutenant Governor, is likely to result in unprecedented changes. In late September, for instance, India Today magazine reported that the army is planning to open up the hitherto closed-off Siachen Glacier to allow civilians with “a keen interest in the Army life” to see “the world’s highest battlefield”. One can only hope that Ladakh’s battles to come will be contained.