Where Wildlife gets a Second Chance

Located on a critical elephant corridor near Kaziranga National Park, the Centre for Wildlife Rehabilitation and Conservation has rescued over 3,OOO animals, including 22 endangered species

I reach Kaziranga National Park two days before Bihu, the Assamese New Year. The villages around the park are uncharacteristically quiet — business is slow, buses have been cancelled, and shops shut early in preparation for the biggest festival of the state. But days at the Centre for Wildlife Rehabilitation and Conservation (CWRC), a rescue facility on the peripheries of Assam’s Kaziranga National Park, are busy as usual. As I walk into the Centre, a team returns from a mission to a very warm welcome — they had stepped out to release 30 rescued vultures into the wild. More than a week ago, the Centre received a call from Demow Forest Beat Office informing them that 34 vultures were found unconscious in Sivasagar district, about 180 km from the Centre. Three of them were slender-billed vultures that are listed as ‘Critically Endangered’ on the International Union for Conservation of Nature (IUCN) Red List. Early the next day, Samshul Ali, a wildlife veterinarian, and his team set off for the beat office, but transporting birds that are at least three-feet tall was not an easy task. For the vultures’ comfort, they turned their vehicles into temporary cages, covering all sharp edges with tarpaulin and stacks of hay. “The birds were in a coma, so we drove very slowly over bumps and speed breakers,” says Ali. Despite their efforts, three died en route. After a four-hour journey, the remaining were brought to the Centre, where treatment continued till 2 am in the morning. A few hours of rest, and Ali was up again at 5 am for another round of medication. At the Centre, it is all in a day’s work. 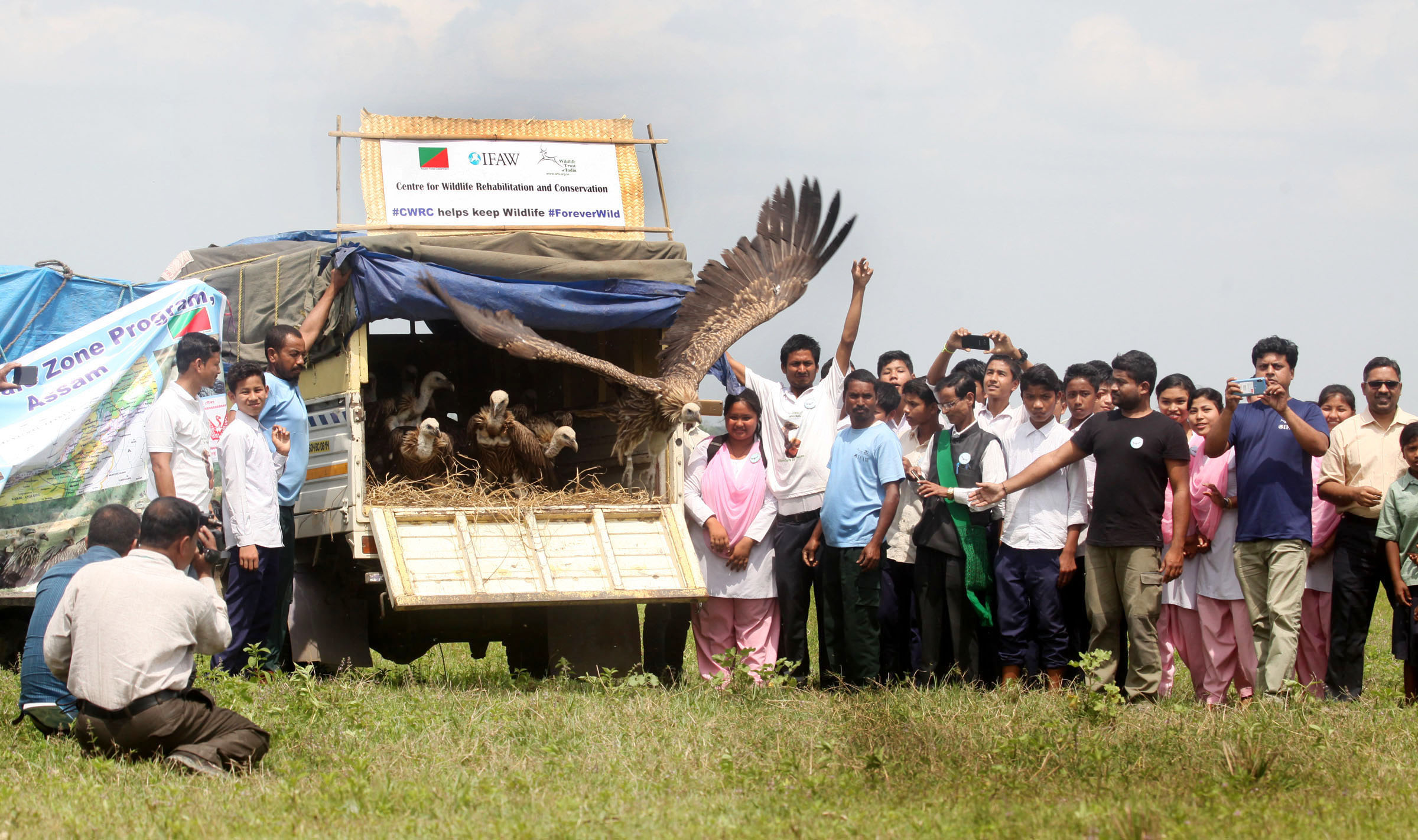 Over 30 vultures were treated for poisoning and released back into the wild at Bargaon Nalanipathar in Sivsagar district of Assam on April 9, 2019. Photo: Subhamoy Bhattacharjee/WTI-IFAW

As I walk around the Centre, two cackling, excitable Oriental pied hornbills, hopping on a red silk cotton tree, greet me. “These two were found caged. We treated and released them,” says Rathin Barman, deputy director and centre in-charge. “But they returned to settle in the campus.” Located besides a critical elephant corridor near the Panbari Reserve Forest in Assam, CWRC claims to be the only facility in India where orphaned and injured wild animals of a variety of species are hand-raised and treated. “We are not a residential facility,” clarifies Barman. “We are committed to returning animals to the wild, unless there is a valid reason to keep them back.” Since its inception in 2002, the Centre has handled 3,310 cases of wildlife belonging to 249 species of mammals, birds, and reptiles in Assam. Twenty-two of these are listed on the IUCN Red List of Threatened Species. The Centre has seen all sorts of animals at varying stages of need — including hog badgers, fishing cats, flying squirrels, clouded leopards, Chinese pangolins, tigers, leopards, elephants, rhinos, pygmy hogs, eagles, and a black softshell turtle that has been listed ‘Extinct in the Wild’. More than half of these species were successfully set free in the wild after treatment.

Four rhino calves rescued during 2016-17 flood, were translocated to Manas National Park by CWRC in the month of January 2019. As part of rehabilitation process, the rhino calves are encouraged to stay in water during the day to keep them away from biting flies and other insects. They mostly forage at night. Photo: Dr Bhaskar Choudhury/WTI-IFAW

The Centre was set up in 2002 by the Wildlife Trust of India and the Assam Forest Department to address Kaziranga National Park’s increasing number of wildlife casualties during the annual floods. Kaziranga National Park, a Unesco World Heritage Site, lies in the river’s Brahmaputra’s floodplains. Every monsoon when torrential rains and hundreds of tributaries empty into the river, it overflows and inundates two-thirds of the park. Though the process is necessary for the rejuvenation of its swampy landscape, the event temporarily displaces all its residents. Most travel south in search of highlands, but outside the secure, legally protected boundaries of the park, the fiercest animals are vulnerable. Many find themselves stranded in tea estates and farms on the peripheries, others are forced to cross NH37 highway that separates the park from the Karbi Anglong hills to the south. Many run the risk of turning into roadkill. The floods are the busiest time of the year for the Centre — four to five days of the flood sees over 100 cases, forcing the Centre to work round-the-clock. “None of us have time to eat, or sleep. We have only two veterinarians, and we have to depend on forest guards and local volunteers,” says Barman. While most animals are released into the wild, the young ones, especially rhinos, deer and elephants, who are stranded and cannot survive alone in the forest are hand raised at the facility. Some stay at the facility for several years, but some, like the hornbills, recognise the Centre as a safe space and return after being released.

The annual flooding of Kaziranga is the busiest time of year for the Centre. The deluge sees the largest casualties among deer. Photo: Subhamoy Bhattacharjee/IFAW-WTI 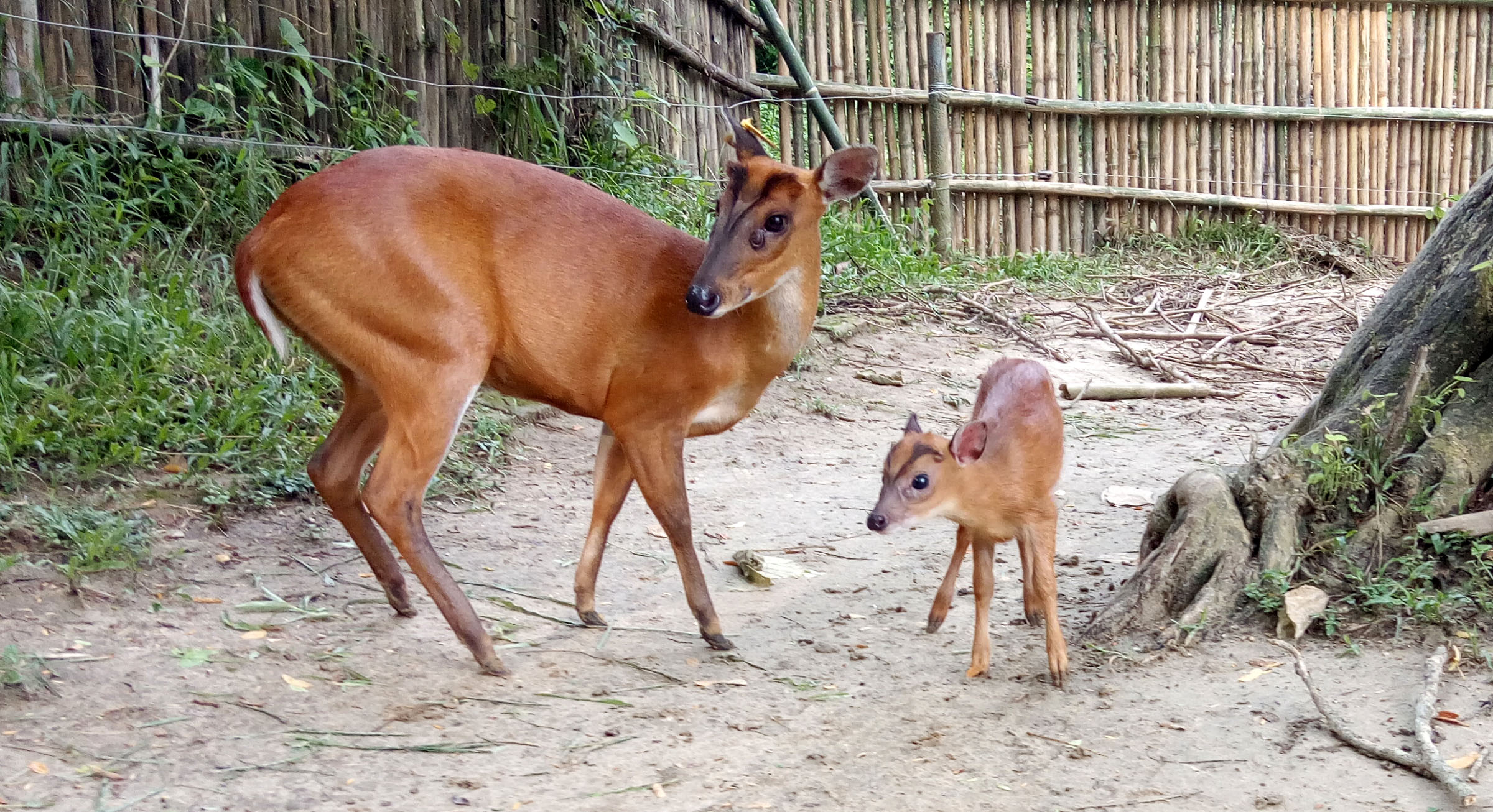 A barking deer, rescued at the Centre, returns every year to safely deliver her new fawns at the campus. Photo: Panjit Basumatary/IFAW-WTI

Five years ago, the Centre received an injured barking deer’s baby during the flood. For several months, the deer was kept under close intensive care and bottle-fed, before it was healthy enough to be released into the forest. A year later, the deer returned, this time pregnant with her first born. “We think the deer identified the campus as a secure space to give birth. We had ear-tagged her before the release, so we quickly recognised her,” says Barman. Once the fawn was born, she stayed till it was old enough to run free. A year later, she returned for her second born. The deer has given birth to four fawns on the campus, and the staff eagerly waits for her every year.

Working at a rescue Centre is an intimate, and emotional experience. Unlike a wildlife biologist who may never touch the animals they study, working at the facility means learning on the job — how to hold an animal who is afraid, how to capture it ethically. “You watch them sleep, you eventually learn to communicate with them, and you learn all their idiosyncrasies,” says Ali. “For instance, I now know that rhino calves always have runny noses. Or not every animal’s release can be the same.” A tiger or a leopard once released, will furiously dart into the forest, without a goodbye. An elephant calf, however, will need to be egged on — taken on several walks around the jungle so it can re-familiarise itself with its surroundings. This process can take months before it confidently chooses to walk away.

Veterinarian Samshul Ali, on a rescue mission during the floods. Photo: Subhamoy Bhattacharjee/IFAW-WTI

But it is rescuing vultures that remains close to Ali’s heart. Years ago, Ali was on his way to school when a vulture shat on his fresh, newly-bought school trousers and discoloured them. After that incident, Ali would notice the large birds as they perched on the top of bombax trees. Then slowly they started falling off and crawling on the floor before dying. The vulture population in India has seen one of the most dramatic declines of a wild species in human history. One of the major causes is the widespread use of drugs such as diclofenac, once commonly used for treating livestock, that entered the vulture’s digestive system when they fed on carcasses. “Watching them die as a child is one of the reasons I became a veterinarian,” he says. “This morning, every flight of every one of those 30 vultures drove me to tears.”

While we are chatting, Ali is called to look at an injured tokay gecko, a slithering grey reptile with cherry-red dots. The gecko has injured itself during a fight and needs immediate attention. Ali, who has only returned a few hours ago, carefully holds the bleeding gecko, and walks towards the surgical table. Rescue, at short notice, is the Centre’s specialty.