Dogs on the Rooftop: Faithful Friends or Fierce Predators?

It was a cold November day, and the fresh snow along with the wind chill slowed down our pace as we walked on a village trail in Himachal’s Spiti region. Our team of ten was in a village called Chichong in Upper Spiti. We were stationed at the government inspection bungalow and were gearing up for the next four days of counting dogs in the Losar panchayat of Upper Spiti. Chichong is one of the villages in this panchayat on the banks of the Spiti River. It was here that I was addressing an emerging issue in conservation as a part of my PhD research: the varied dimensions of threat by free-ranging dogs in a fragile landscape.

As I walked along the bank, a group of six dogs feeding on a donkey carcass caught my attention. The dogs were oblivious to my presence and I took the opportunity to photograph them while still maintaining a safe distance. However, one of them felt that their privacy was being intruded, and ran up the bank charging fiercely. My only option was to stand my ground, and as it came closer (about 10 m), what I saw was not a ‘faithful friend’ but an animal completely transformed into a skilful predator. After a brief moment of eye contact, the dog went back to the carcass, while I continued to stand there watching them feasting for some more time, assimilating the incident. The village locals reported a donkey had been being killed by dogs the previous night.

Over the next two years, as I travelled across this landscape, there were innumerable instances of dogs hunting in packs, killing both livestock and wildlife. Local people reported several instances of blue sheep being killed by dogs, particularly during winter, when the depth of snow slows down the blue sheep on the run. In the two years of my fieldwork, several anecdotes floated in. The pradhan of Kaza village mentioned a video footage that he had taken of a pack of dogs chasing a snow leopard. I personally observed a pack chasing a herd of ibex, and another pack which had killed a red fox. That the landscape had a pressing conservation problem was clear. Man’s best friend had turned foe and there was an immediate need to manage this issue to conserve this fragile mountain system. 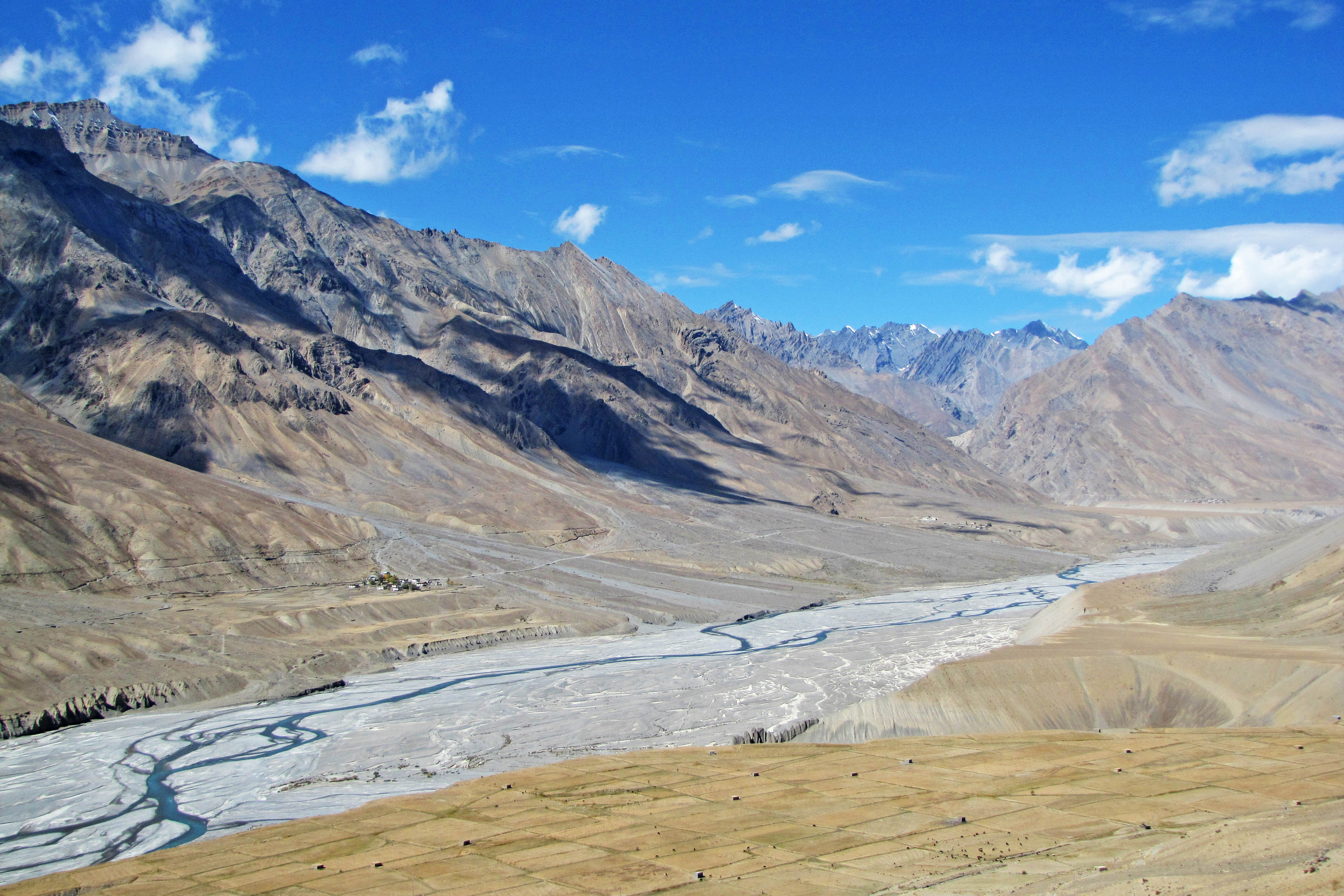 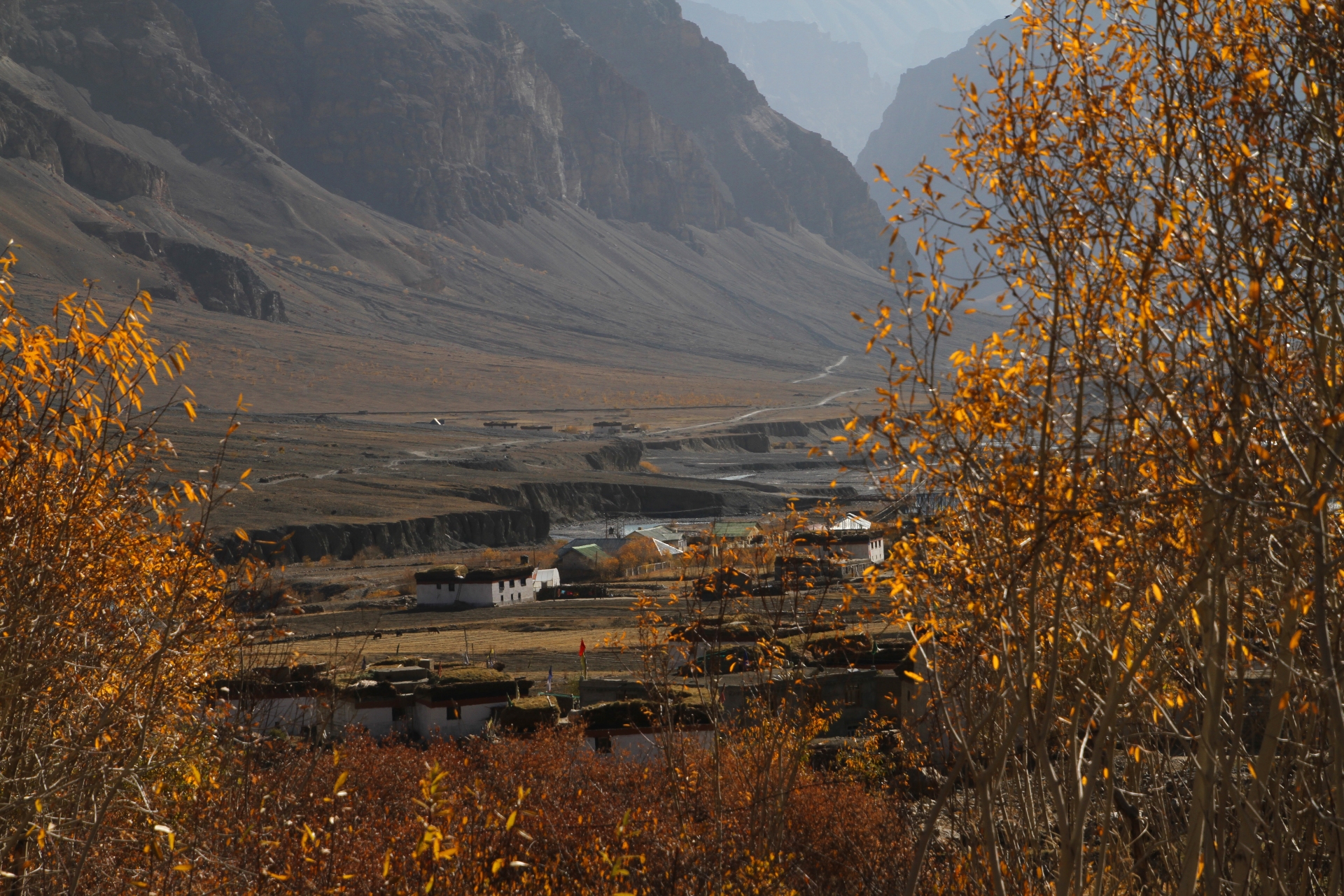 A bird’s-eye view of the Upper Spiti landscape from Kee Monastery, home to several unique cold desert flora and fauna. Photo (left): Chandrima Home Losar is a typical Trans-Himalayan village nestled in Upper Spiti. Its residents are largely Buddhist agro-pastoralists, who raise livestock and cultivate green pea and barley in the summer. Photo (right): Gerd Eichmann - CC BY-SA 4.0 A pack of dogs hound a kiang in Ladakh. Many domestic dogs have turned dangerous predators in this cold desert region, and in a pack they can hunt down animals several times their size. Cover Photo: Saurabh Sawant

What became more evident over time was that these instances are not restricted to my study area, but are a common phenomenon across the Trans-Himalayas as well as the subcontinent. In fact, domestic dogs have been reported to attack at least 80 species of wildlife in India. Most of these attacks are steered by large packs of dogs. Being in a pack gives them an added edge, to hunt animals that are sometimes three or four times their size. Over the years, there has been an increase in the number of reports of wildlife being attacked by free-ranging dogs, and their impact in these cold deserts has become even more apparent. About two decades ago, there would be occasional instances of dogs killing a sheep or a goat, and local communities reported high losses to livestock by wild carnivores such as snow leopards and wolves. However, in recent years the tables seemed to have turned. In-depth discussions and interviews with local communities helped shed some light on how domestic dogs have played (or are still playing) an important role in altering the socio-ecological linkages within the landscape.

Some places like Ladakh have been grappling with this issue for quite a while now. Here, along with livestock and wildlife deaths, free-ranging dogs have been involved in human deaths as well, making it a severe conservation and a welfare concern. As an animal which has always been an integral part of people’s lives, visualising it as a vicious predator is difficult. However, considering their evolutionary history (dogs were domesticated from wolves) they are essentially predators in an ecosystem. 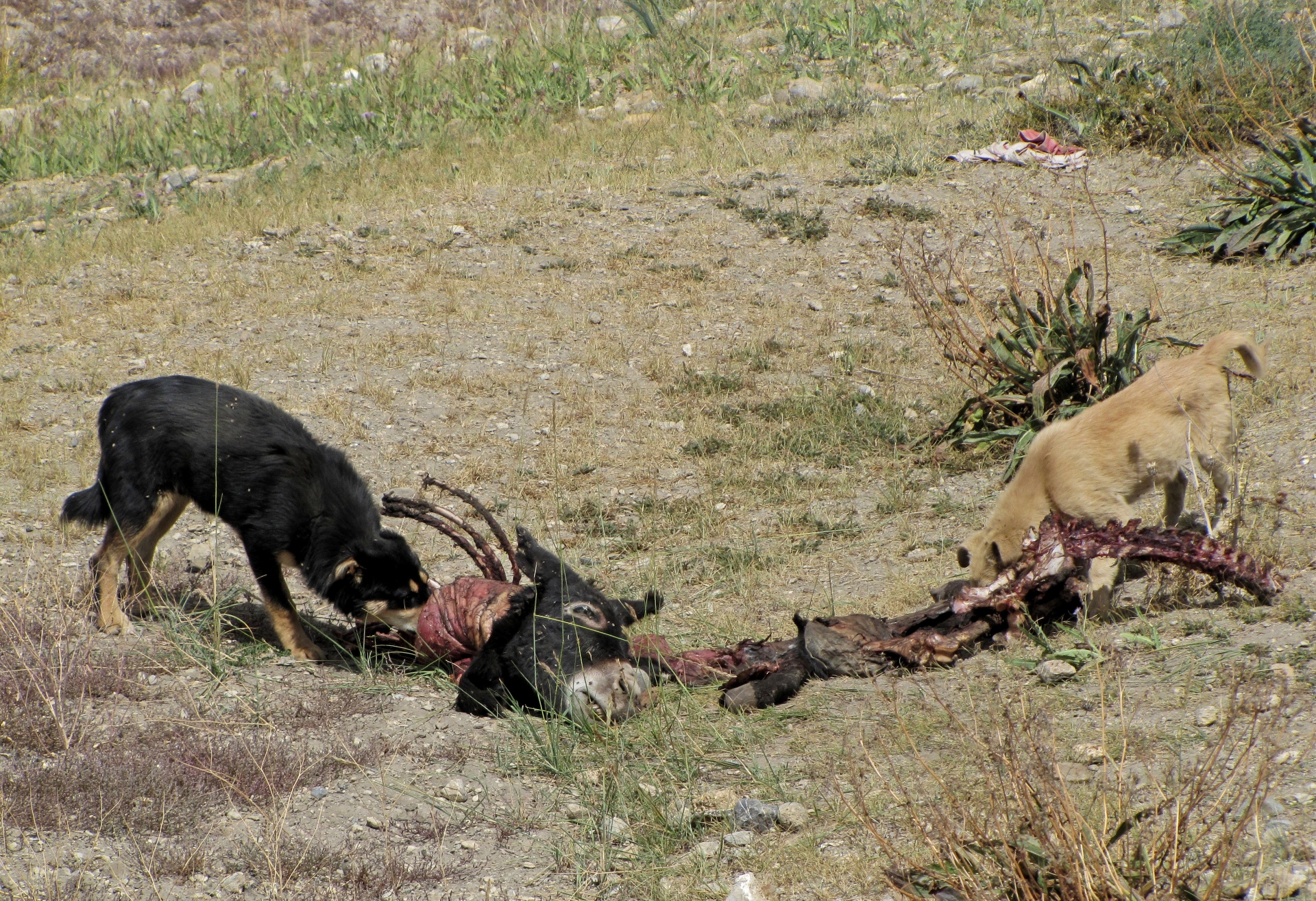 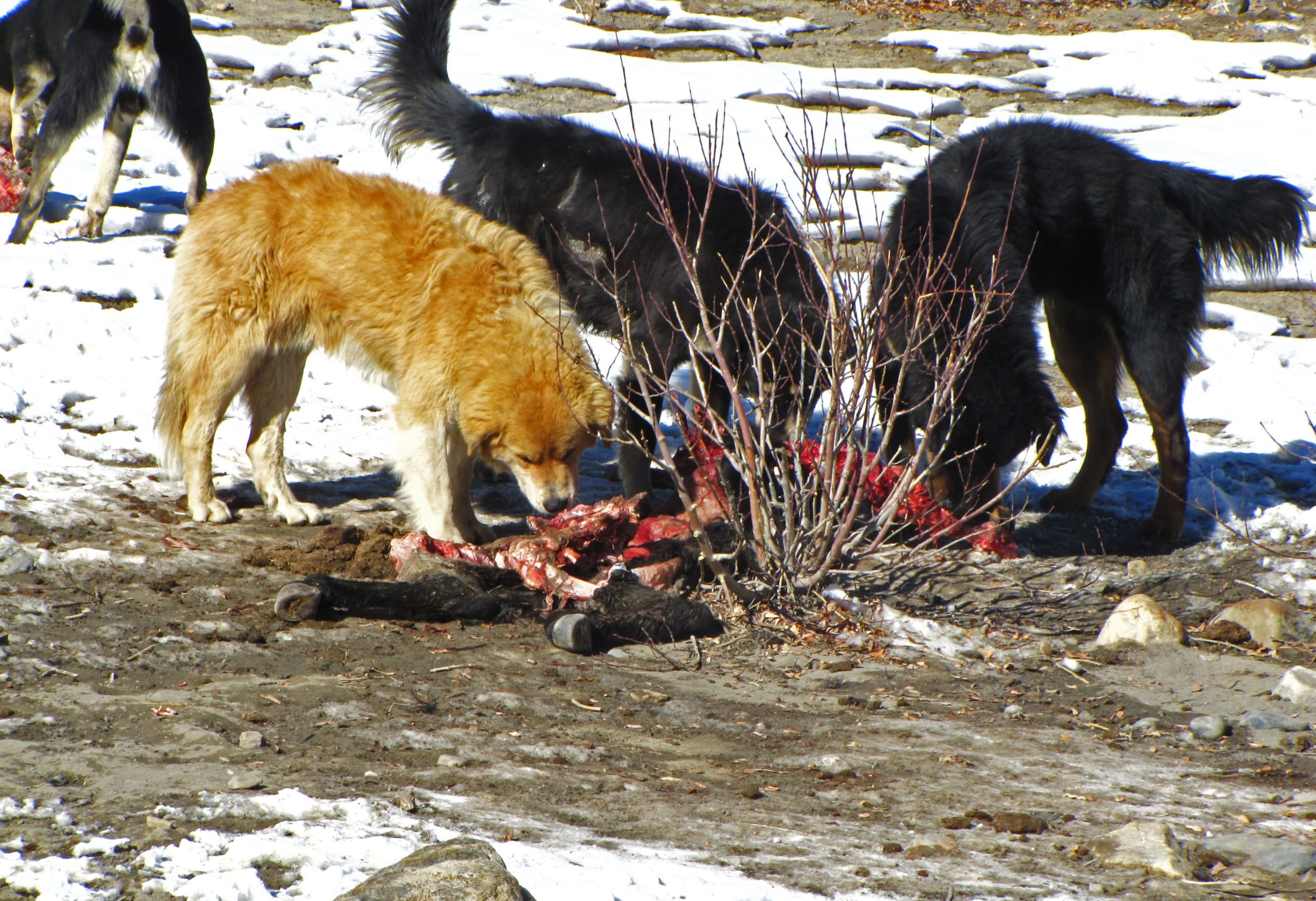 A pack of free-ranging dogs had killed a donkey outside Kibber village in Upper Spiti. They ate their fill and once they were satiated they left the remains for the other dogs of the village. Photo (left): Kesang Chunit A pack of dogs feeding on donkey carcass along a river bank in Chichong village. Photo (right): Chandrima Home

Equally interesting has been the contradictory perception of dogs vs. wolves. The dichotomies in the wolf-dog, human-wolf, and human-dog relationships have shaped several stories and folklore. In a discussion about the problems of free-ranging dogs, over a cup of namkeen chai, an old retired teacher in Sumling village once related an old folklore that went like this: “One day the wolf met the dog and they became friends. The dog asked the wolf, ‘Can you teach me your gait and in exchange I will teach you how to smell’. The wolf taught the dog his gait, but the dog tricked the wolf and did not impart its ability to smell. And since then, wolves and dogs have never been friends.”

On one hand wolves are widely abhorred, and despite protection, they have been virtually decimated in most countries. On the other hand domestic dogs have been seen as the epitome of faithfulness and trust, and have subsequently grown to be the most common terrestrial carnivore across the globe (~ 1 billion).

With an increasing number of attacks on wildlife by free-ranging dogs, an important question to ask is why has the problem reached a point where managing it seems like an insurmountable problem in the Trans-Himalayas, be it Spiti, Ladakh, or Sikkim?

Perhaps this problem is a prime example of how anthropogenic subsidies impact food chains with possible consequences to the environment. As and when these landscapes opened to tourists, changing the socio-economic profile of local communities, the problem of waste and the inability to manage it has resulted in the proliferation of dogs. 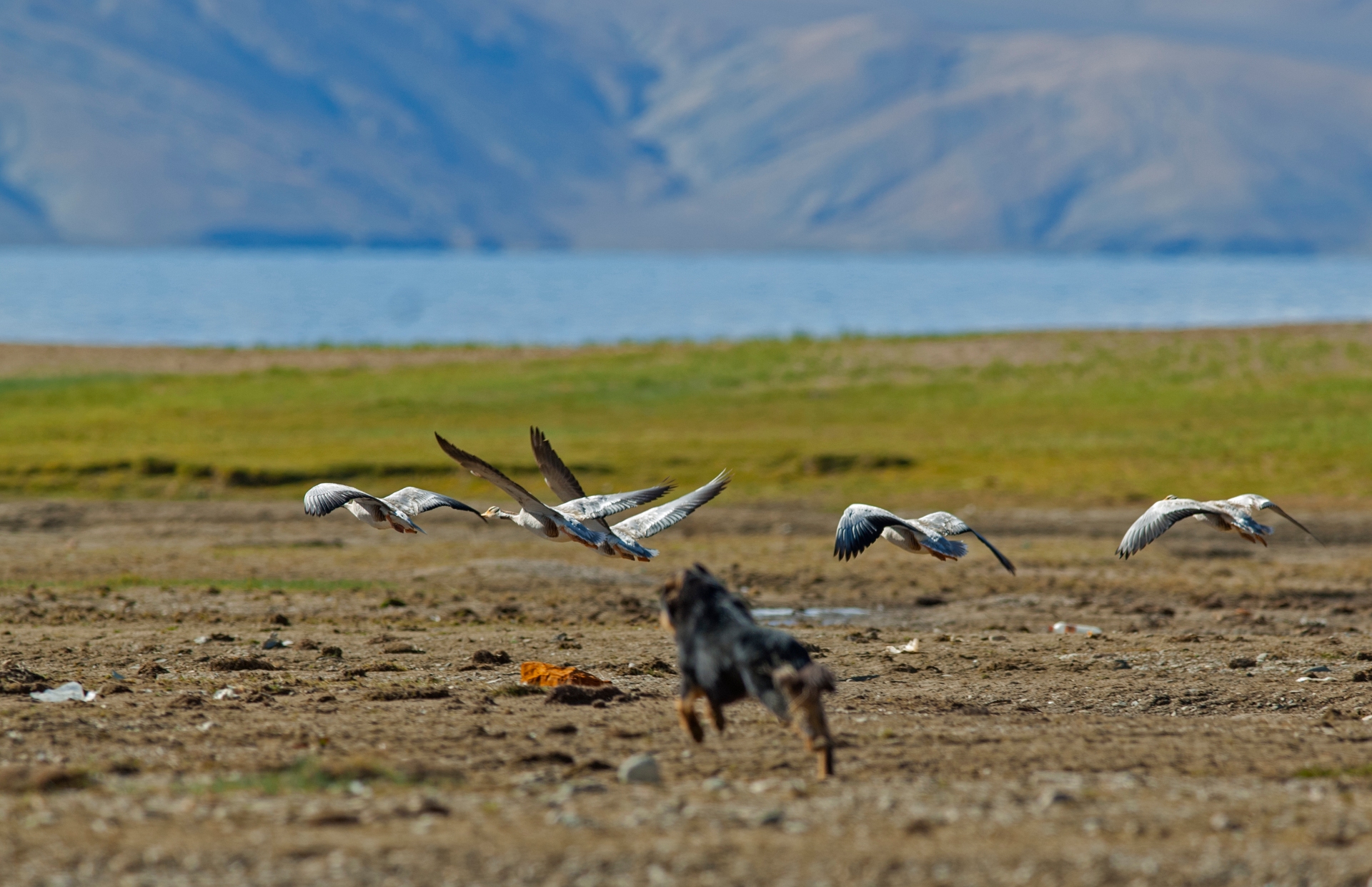 Dogs attacking wildlife has now become a common problem across the Trans-Himalayas. Here, a dog chases a flock of bar-headed geese in Changthang. Photo: Dhritiman Mukherjee

Cultural attitudes also play a crucial role in how dogs are viewed in these landscapes. The issue is multi-layered (with psychological and ecological angles) and unpacking these layers involves efforts across space and time. A myopic vision of animal welfare also adds to its complexity. Although capture-neuter-release methods have been the sole mandate for dog population control, it still does not address the issue of predation by dogs. This essentially means that a multi-pronged approach in terms of garbage management, banning direct feeding of dogs, and stricter dog ownership laws must be enforced along with population control.

Dog ownership laws in India have always been lackadaisical and they need to be made more stringent. Stricter laws for dog owners, restriction in terms of entry into wildlife areas, and removal of ownerless or semi-feral dogs are some measures that are required.
It is important to acknowledge the negative impacts of domestic animals, and the extent to which they can affect wildlife conservation efforts. It becomes imperative to manage dog populations in a systematic manner in these fragile landscapes. In a country like India where there are strong polarised views, finding a middle ground that reconciles the rights of both domestic and wild species is equally important. Animal welfare should not just encompass dogs, but other species as well. 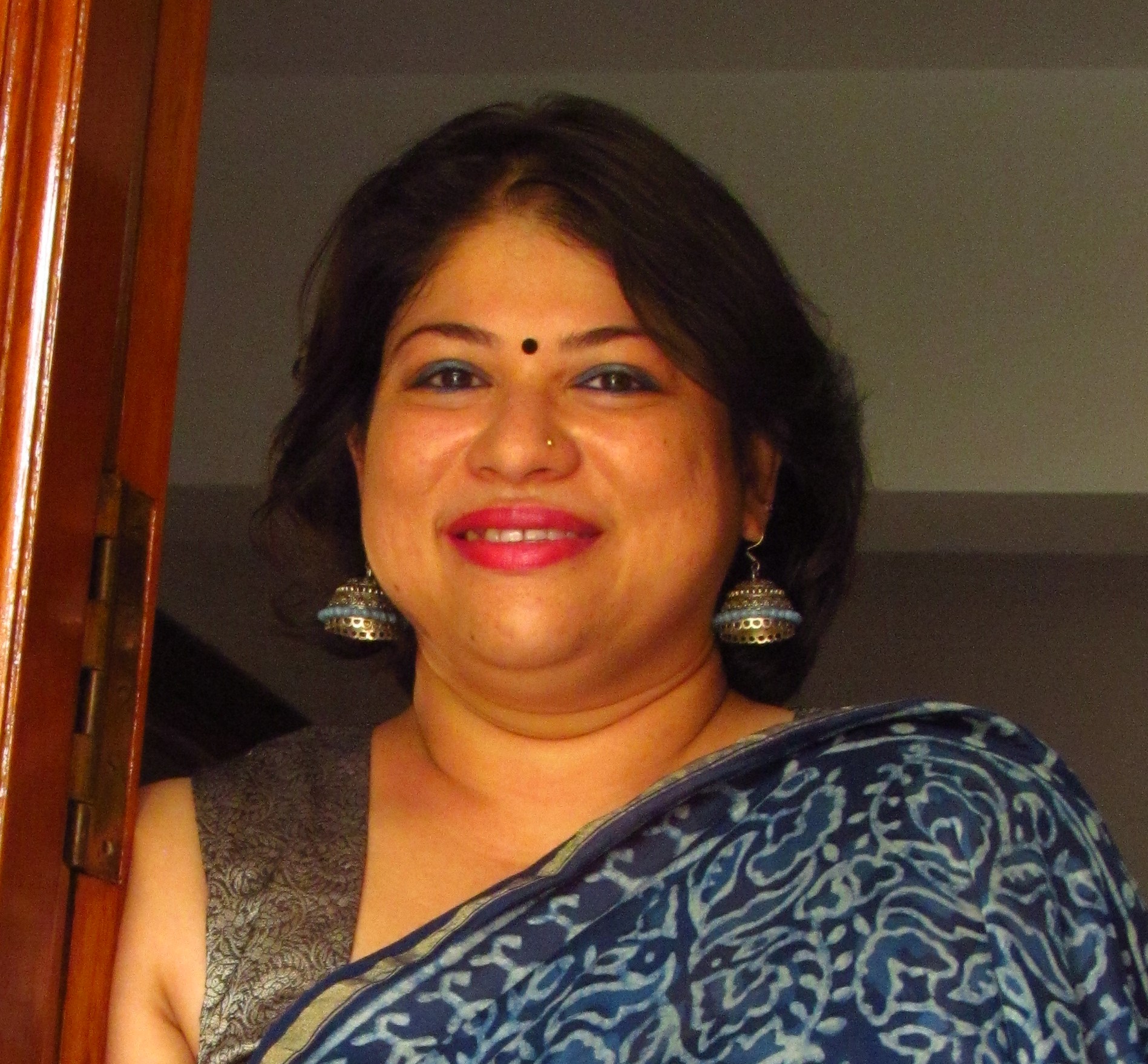 recently completed her PhD from Ashoka Trust for Research in Ecology and the Environment. She believes that vastness of the mountains and the seas put a perspective in people's lives.