In a primary school classroom near Coringa Wildlife Sanctuary, we watch Laxmi and her classmates in rapt attention. They’re watching a video of a fishing cat hunting in a creek that flows behind their village, quite literally in their backyard. They are curious about the cat, and amused by its unsuccessful attempts to catch fish. Everybody in Laxmi’s class has heard about the fishing cats — bavurapilli in Telugu — that live in the mangrove forests near the village, but only two have seen the feline in the flesh.

Laxmi belongs to a fishing village that abuts Coringa Wildlife Sanctuary (CWS), a protected area spanning over 250 sq km of mangrove forests in the Godavari delta in Andhra Pradesh. The Godavari River, the longest in peninsular India, has its own amazing journey. It originates in the Western Ghats in Maharashtra, flows eastward, travelling through the plateaus of Central India, and cutting through the hills of the Eastern Ghats in Andhra Pradesh, before meeting the Bay of Bengal in a confluence, near CWS, on the eastern coast.

The river’s course runs 1,465 km, but is severely constricted due to large, unsightly reservoirs that halt its flow. The Godavari has the highest number of dams and irrigation projects on it, and is among the most fragmented and regulated rivers in India. But just as the river enters the Eastern Ghats and meets with the numerous tributaries gushing down its precipitous hills, it regains might and forms the expansive Godavari delta.

There is a common expression in Andhra Pradesh, that states “One should be born in the laps of the Godavari river and its delta”. It is a simple statement that summarizes the importance of the river, and why it is aptly called Dakshin Ganga. The Godavari accrues ecosystem services to over 60 million people, chiefly by providing fresh water for consumption and agriculture. In addition to this, the river also empties tremendous amounts of silt into the Bay of Bengal, which is essential for the maintenance of the delta and the mangrove forests of CWS. 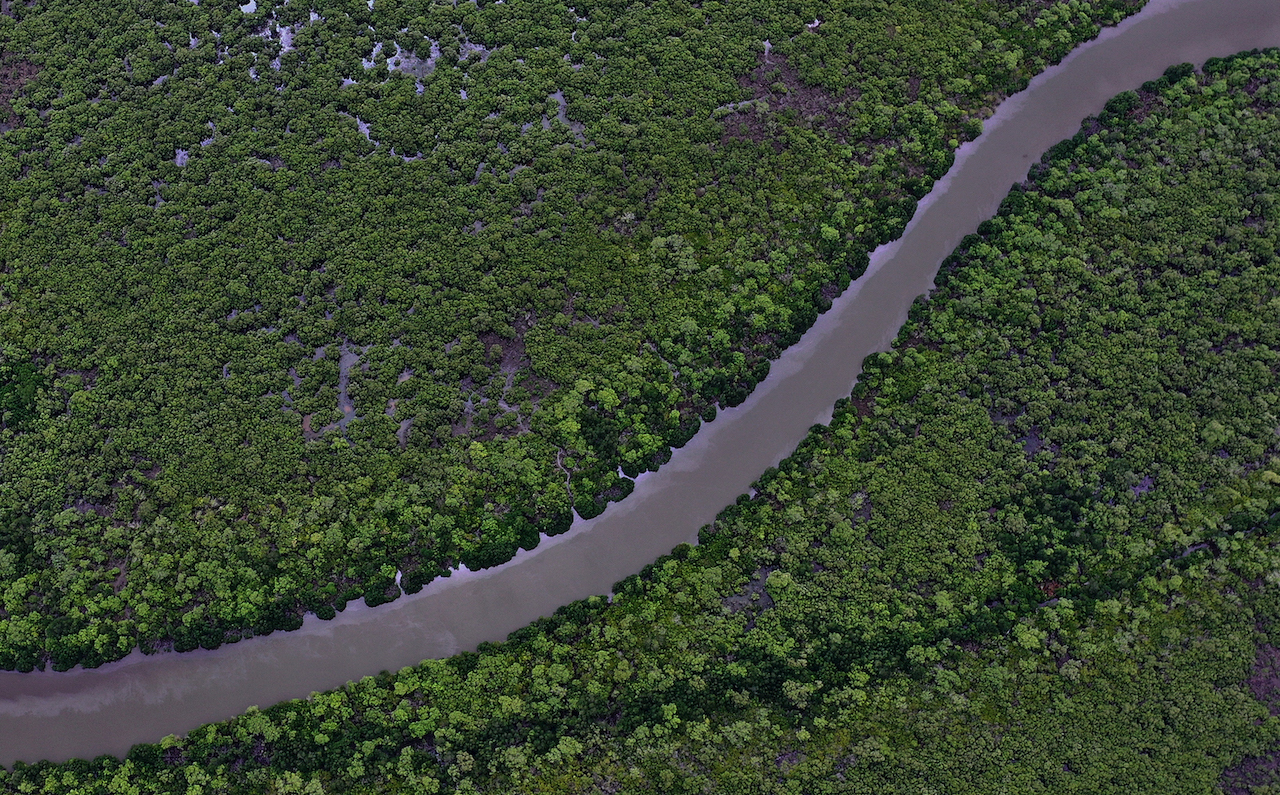 Mangrove forests are resilient habitats, but the absence of a buffer land and reduced freshwater flow weakens the adaptive capacity of this ecosystem. Tell-tale signs of sea level rise are already visible in the mangrove forests of the Godavari delta. Photo: Srikanth Mannepuri The mangroves of Coringa Wildlife Sanctuary, in Andhra Pradesh, provide a safe and resource-rich haven for the fishing cat (Prionailurus viverrinus). The elusive feline is listed as vulnerable on the IUCN Red List of Threatened Species. Photo: Anjani Kumar

This critical connection between the Godavari river and its delta will soon be disrupted after the Polavaram Dam — a large multipurpose project in Andhra Pradesh — becomes operational. The downstream impacts of this dam include coastal erosion, decrease in silt and nutrients from the river, and an increase in salinity in the creeks of mangroves. This might be devastating for the millions of people as well as the biodiversity associated with the delta.

As part of a four-year project supported by the United Nations Development Programme (UNDP) and Ministry of Environment, Forest and Climate Change, our team of six researchers and scientists from Wildlife Institute of India set out to document the unique biodiversity of the Godavari delta and the Coringa mangroves. Our study began in 2013, with the goal of understanding ecological changes brought on by climate change and other anthropogenic factors. Assessing the distribution and conservation status of fishing cats was one of the important objectives of this project.

The fishing cat is one of two feline species in the world that are wetland dependent. They generally inhabit mangroves, swamps, and other wetlands in parts of South and Southeast Asia where they are found. Due to rampant degradation and loss of wetland habitats across its distribution range, the fishing cat is now listed as ‘Vulnerable’ on the IUCN Red List of Threatened Species.

To add to this, information about fishing cat ecology and behaviour in the wild is scarce, which makes conservation efforts even more arduous. Our surveys suggest that the feline’s occurrence in the coastal areas of the Godavari delta were highest in the mangroves, and although the species is considered nocturnal, many of our observations were made in broad daylight.

Memories of our first encounter remain vivid. On a warm morning in February 2013, our team of two researchers and two field assistants were fish sampling on a rented motorboat, in one of three subtidal creeks inside CWS. Sampling refers to field-based sampling done in all the major creeks, to understand the species of fish inside the CWS (so as to better understand their predator). Paromita was studying the patterns of fish distribution across the Godavari delta, and Giridhar was focussed on the fishing cat’s ecology.

It was low tide and we had just completed one round of sampling. The sampling gear — a locally made fishing net — was set across the second sampling site, and we were headed for a spot along the mangroves with some shade. It was 10.30 am, but the sun was already blazing over our heads.

Our field assistant-cum-boat driver Prasad Anna was rowing the boat along the creek at an unhurried pace, while Paromita was taking length-weight measurements of individual fish, to estimate the approximate size of a fishing cat’s catch. Suddenly, Prasad Anna abruptly stopped rowing and called our attention to a moving silhouette on the right bank of the creek.

And there it was.

Though it lives in the mangroves and swamps of Coringa Wildlife Sanctuary the very elusive fishing cat is rarely seen even by researchers who spend years in the area; this one was luckily caught on a camera trap. Photo: Giridhar Malla/Wildlife Institute of India

We watched awestruck, as a male fishing cat walked elegantly on the wet mangrove floor, dotted with the pencil-like aerial roots of Avicennia sp., poking out of the soil. We maintained a safe distance from the felid, and made sure not to switch on the boat’s engine, but a number of fishing boats regularly whizzed past us. It was amusing, but neither the fishing cat nor the fishermen seemed perturbed by each other’s presence.

At one point during this 20-minute encounter, the fishing cat spotted a dog-faced water snake near the bank, pounced on it, and eventually ate it. We were beaming with the excitement and thrill of making such direct behavioural observations, and that too, of a unique species that had rarely been observed in the wild.

As luck would have it, the encounter met with a remarkable climax.

Deeply engrossed in video-recording this encounter, Paromita had forgotten her actual task: Estimating the fish catch, when she suddenly felt a hard smack on her left shoulder. Bewildered, she turned around to see a brahminy kite, landing deftly on the boat (and smacking her in the process). It was attempting to steal from the fish samples that laid unattended beside her. To the bird’s credit, it was a successful attempt!
During the course of our four-year project, we had a number of memorable experiences, that comforted us. It was heartening to see a thriving, viable population of this threatened cat in the mangroves. But one step outside the secured confines of the Coringa, and the mangrove is fraught with multiple threats.

Andhra Pradesh is the leader in shrimp production in India despite the inherent risks of the business. Shrimp farms often suffer great losses due to viral disease, but the farmers that are successful make far more money than the average fishermen. This lure of quick benefits has catalysed a spurt in shrimp-based aquaculture ponds in the Godavari delta in the past decade. Large parts of the unprotected mangroves in the delta are being reclaimed and converted to shrimp ponds. At other sites along CWS, hardly any space is left between the mangroves and the shrimp ponds, leaving no buffer for the mangroves.

The silt-laden freshwater from Godavari River are critical for maintenance of the delta and millions of people dependent on it. Photo: Giridhar Malla

We also conducted social surveys of the villagers living close to the mangroves of CWS, to assess their attitudes towards mangrove conservation and climate change. Results showed that locals attach a high value to the mangroves, particularly for the livelihood from fish it offers, and natural protection provided during cyclones and storm surges. Unfortunately, local awareness on the potential impacts of climate change was abysmal. This is especially frightening, considering our field surveys have recorded several direct and indirect signs of a rise in sea levels in the area. At several sites along the coast in Godavari delta, signs of erosion and mangrove die-backs are apparent; the mangroves in CWS are moving landwards.

Since the past decade, the Andhra Pradesh Forest Department has been successfully carrying out mangrove plantation drives that have resulted in recovery of some mangrove cover in the state. Making the fishing cat the flagship species of CWS is another step taken by the Forest Department, in garnering people’s support for conserving this threatened felid.

Giridhar has also initiated a small project named “Children for Fishing Cat”, which aims to raise local awareness on the species, by engaging with schoolchildren like Laxmi, who belong to local fishing communities. These awareness programs involve drawing and colouring activities, screening of videos on fishing cats, and interactive sessions with the children.

Students from a primary school near Ramannapalem village, Andhra Pradesh, involved in a session conducted by the Children for Fishing Cat initiative. Photo: Paromita Ray

Back in the classroom, Laxmi and her classmates watch our video, letting out little gasps and “oohs and aahs” every now and then. Their excitement is heartening, but it is hard not to lament the uncertain future of the mangrove forests and Godavari delta. Especially considering rising sea levels and river regulation. The future looks like a struggle, and at the forefront of the struggle, are children like Laxmi and threatened species like fishing cats, both of whose futures are intricately linked to the fate of the mangrove forests.

Paromita is currently working as a Research Associate with WCS-India. She is an aquatic ecologist with over 5 years’ experience on studying fish ecology in inland and coastal ecosystems, and on conservation of mangroves and associated threatened mammals. Her major interest lies in community-based conservation of aquatic species and small-scale fisheries. She is also pursuing PhD on community ecology of fishes in a mangrove habitat from the Wildlife Institute of India.

Giridhar is currently pursuing a PhD on ecology and conservation of fishing cats from Wildlife Institute of India. His major interests are behavioural ecology, occupancy based modelling and acoustical ecology. He is an active member of Fishing Cat Working Group and founder of Godavari Fishing Cat Project, which ensures the long term conservation of fishing cats in Godavari delta and its surrounding habitats.

K. Sivakumar is currently a Scientist-F from Department of Endangered Species Management, at Wildlife Institute of India. He has 23 years of research experience on threatened fauna of India, especially marine biodiversity and birds. He has been working for the integrated management of aquatic biodiversity and its habitats in India.