Flight of the Magnificent Hornbills

For an hour or so, I stood on the bank of the Bordikorai-Pakke river, watching and counting wreathed hornbills landing in twos and threes, on a couple of black siris or koroi  trees. Some circled the tree before landing on a branch, others flew across the river to perch on a tall red silk cotton or semal tree. They flapped and jostled for space trying to get comfortable. The sun had gone down, but the sky was still glowing. I wondered if the great hornbills would show up as well. As I was about to leave, they arrived suddenly, in singles, twos, and threes. I struggled to keep track of numbers as they glided over my head, but I counted at least 62!

During roost monitoring counts, I would usually try to count the numbers of males, females, and juveniles separately. This is easy in case of the wreathed hornbill which arrives when there is still light and the male and female are quite distinct. But among great hornbills, where the male and female differences are only in terms of eye colour and minor differences in the casque, it is impossible to tell them apart when they fly in to their roosts fast in the fading light.

I have witnessed many flights of large numbers of roosting hornbills over the years, but that evening stands out. I will always remember the joy and delight of it and the flight of the great hornbills over my head. Maybe because it was unexpected. And that they flew in en masse, quite low overhead. Or because of some of their amusing antics in the air, swooping down and up, twisting and turning like acrobats. And then they right themselves and glide for a distance, flapping their wings a few times, gliding, flapping and so on. The flight of the wreathed hornbill is different — they fly very high, like raptors, but with steady deliberate wing beats that can be heard far below. It looks like hard work, while the flight of the great hornbill looks effortless because of the easy glide. 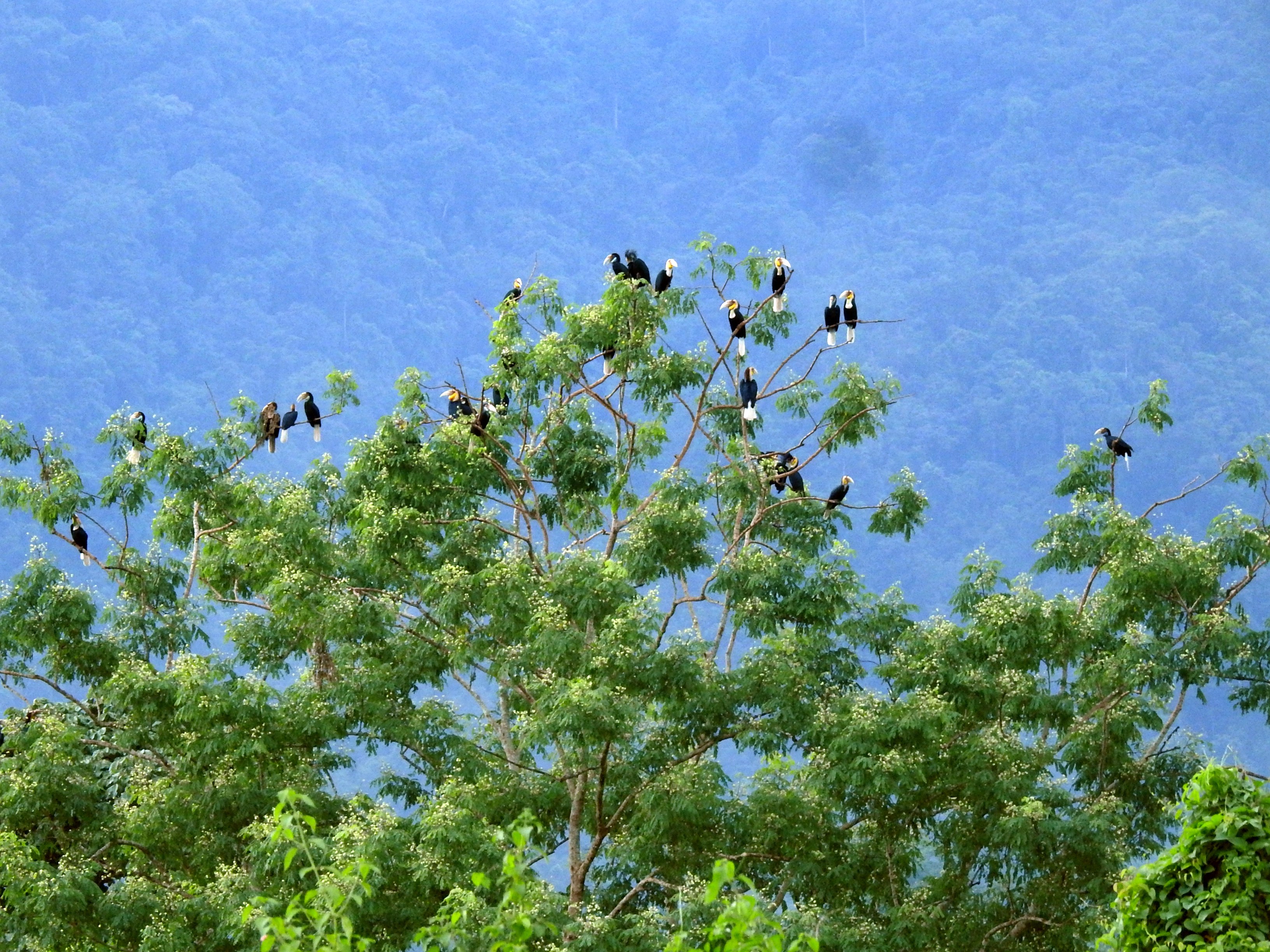 Wreathed hornbills are communal roosters, settling in large numbers to roost together for the night. Photo: Aparajita Datta

It was in August 1997 during the first year of my four-year PhD study on hornbills. In those years, the site was used by both the species at the same time. The phenomenon of roosting in large numbers is called communal roosting and is seen in some species of Asian hornbills.

At another roost site inside the Pakke Tiger Reserve, I recall counting 44 great hornbills and 100 wreathed hornbills roosting on top of a sheer cliff face under a storm-laden grey sky. That too is an unforgettable memory. There were several other roosting sites as well, further upstream along the Pakke River, on the Arunachal side of the reserve.

However, not all research days were so wonderful. In the late 1990s hornbill hunting was common practice. I remember one winter morning, as Japang, my guide, and I quietly approached a fruiting fig tree for a tree watch. We had heard great hornbills calling from afar. But to our dismay there were none when we reached the tree. It was eerily silent, which was unusual given the feeding parties of hornbills that normally visit fruiting figs. An acrid smell of gunpowder hung in the air. On the forest floor were bloodstains, feathers, and bits of spent cartridges.

During those years it was not unusual to see hornbill heads adorning the walls of tribal households and even government emporia in Arunachal Pradesh. From 1997 to 2003, I witnessed the loss of almost 300 square kilometres of forest in Assam, close to the Nameri and Pakke Tiger Reserve. Several hornbill nest trees were cut down. I remember observing a great hornbill male, perched on a lone tree in that landscape of loss. I shared his pain and bewilderment, as he wondered where his home had vanished.

After devastating floods in 2004 and increased human presence and disturbances (trees cut down, loud picnic parties, fishing, and sand mining) along that Bordikorai-Pakke River stretch, we stopped seeing great hornbills, except for the occasional solitary bird in the breeding season.

The Nyishi tribe has a long tradition of adorning their headgear with the beaks of hornbills. Recent conservation efforts have convinced many to stop hunting hornbills, and some have become involved in hornbill conservation. Photo: Aparajita Datta

Apart from the loss of its habitat, the great hornbill has long been hunted. Although the wreathed hornbill is also hunted, the great hornbill is especially targeted for its upper beak and casque which Nyishi men used to adorn their traditional headgear. This cane cap, called bopia, was often also decorated with tail feathers of racket-tailed drongos, raptors and civet tails.

Over the years, the Nyishi living in the Seijosa area of Arunachal Pradesh stopped hunting hornbills and now protect them. It is hard to pinpoint what exactly caused the change of heart, but people slowly developed a concern and love for hornbills. The various conservation measures and activities led by different individuals and organisations must have had an impact, particularly the efforts of the Pakke Tiger Reserve management under the leadership of Tana Tapi, Deputy Conservator of Pakke Tiger Reserve.

In 2011, through the Nature Conservation Foundation (NCF), I was involved in initiating the Hornbill Nest Adoption Programme (HNAP) in partnership with a council of village elders and the Arunachal Forest Department. The programme enlisted locals to protect nesting trees. Until 2018, we monitored and protected about 40 hornbill nests and helped 119 hornbill chicks fledge successfully. No nest trees have been cut in areas where the programme runs. The annual, three-day Pakke Paga Hornbill Festival held in January, that helps spread awareness on wildlife and conservation, and is a platform to showcase local culture, has also resulted in an increased awareness about hornbills.

However, since 2016, community conservation measures have been dampened as illegal logging of trees has increased in the reserve forest area. We now face new challenges. Some of the roosting sites further upstream in Arunachal Pradesh may also have been affected by the presence of new stone crusher units and the movement of people and trucks.

The hornbill roosting site I had monitored during my research in the 1990s, on the Assam border of the reserve, is not frequented by hornbills any more, possibly due to loss of trees and increased human disturbance. But I also believe that hornbills have ‘sensed’ the change in people. The mixed communal roosts are now rarely seen along the Pakke River, though the wreathed hornbill still roosts in large numbers at another location.

From around 2015, the hornbills have shifted to roosting throughout the year in some villages that lie in Arunachal Pradesh. One such roosting site is in the middle of Darlong village. Our NCF field basecamp has been in Darlong since 2012. A few years after we moved in, we noticed hornbills roosting opposite our basecamp. Their numbers started gradually increasing. The wreathed hornbills were seen there throughout the year, with up to 109 birds seen in some months. Eha Tayem, the landlord of our previous basecamp in Darlong, would joke that he should charge more rent for the privilege of their company. He would say, “Dekho, humne aap log ka hornbill pal ke rakha hai” (I have raised your hornbills). I would laugh and reply that they were his hornbills too.

Then, we moved to another house a little further up the hill slope — from here too we could count hornbills. While the main flock still roosts in the earlier site, on some days, a large number turns up in the trees behind our new camp. Soon after dawn, I can hear the hornbills whooshing past while I lie in bed or brush my teeth. I know it’s far-fetched, but I like to believe that these hornbills move where we are because they know it is safe.

Now it is not just researchers like us, but most Nyishi who take pride in the fact that hornbills roost in their village. Some even keep tabs on them and report any disturbance. Dina Brah, a Class 12 student, diligently records the numbers in her notebooks and passes them on to us, sending us scanned pages over WhatsApp. Budhiram Tai, the village headman (gaon burra) and part of the Hornbill Nest Adoption Programme, has also been keeping track of hornbills around his house. In the breeding season, he watches over the hornbill nests under his protection like an anxious parent. He cannot read or write, and so he comes home and makes his son or daughter write out meticulous notes.

Budhiram Tai is the headman of Darlong village, an active member of the Hornbill Nest Adoption Program since 2011, and an avid and concerned hornbill nest protector. Photo: Aparajita Datta

Another person in Darlong who keeps vigil and takes pride in conservation of hornbills is Logu Tayem, a local leader I have known since 1995. In those days, before the Supreme Court’s ban on logging in Arunachal Pradesh in 1996, he used to have a timber mill. Now, the wreathed hornbills roost safely above his house. Tayem has also been collecting hundreds of seeds that the hornbills drop below the roosting trees. He wants to grow the fruiting trees on his land. One day I looked at his seed collection and told him some of the names. He said he had been noting how the bird’s diet changes every month depending on what fruits are available. Despite the new challenges hornbills face, it is most heartwarming to see this change. The knowledge and curiosity has always been there among local communities, but what seems to have changed is the love and concern for the hornbill’s wellbeing. 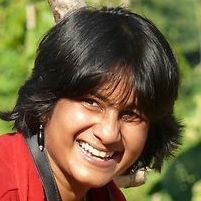 is an award-winning conservationist. She leads the Eastern Himalaya programme at NCF, that has been doing research and community-based conservation on hornbills for over 20 years. Photo: Swati Sidhu