Continuous forests, with connected canopies, are essential for the tree-dwelling species to travel for food, shelter and survival 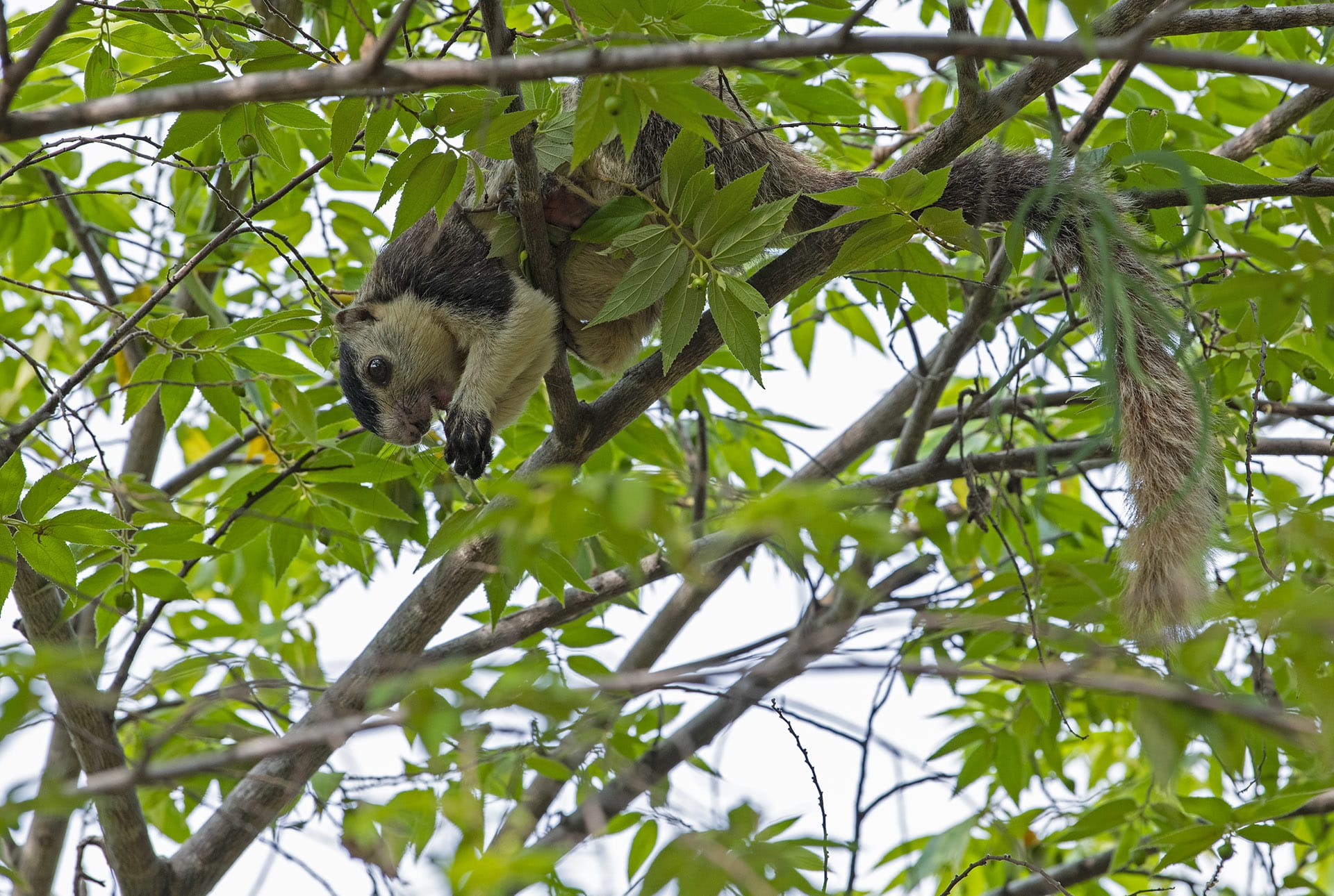 It was in 1992 that the presence of grizzled giant squirrels was first reported from Mutathi, in Cauvery Wildlife Sanctuary in southern Karnataka. It is the only place in Karnataka, where they have been found. The Cauvery river, which lends its name to more than 1,000 sq km of protected forest area, meanders through the landscape that is largely composed of dry deciduous and scrub vegetation. The only areas that remain lush green year-round are the narrow strips along either side of the river, where lofty tall riparian trees grow such as Terminalia arjuna, or muthee, as it is locally known. These trees are endowed to sustain harsh riparian conditions — partial submergence due to raised water levels during the monsoons and dry riverbeds during peak summers. In the broad branches and wide spreading canopies of the muthee trees, live the grizzled giant squirrels, an arboreal (tree-dwelling) species that rarely descend to the ground.

The Cauvery Wildlife Sanctuary is the only protected area in Karnataka where grizzled giant squirrels are found. The tall trees of the narrow, riparian forest, which remains green throughout the year offer these squirrels refuge. Photo: Ipsita Herlekar Cover: Found in parts of south India and Sri Lanka, the grizzled giant squirrel is the smallest of three species of giant squirrels found in the Indian subcontinent. About the size of a domestic cat, the squirrel is almost entirely tree-dwelling and will rarely descend upon the forest floor. Cover Photo: Dhritiman Mukherjee

My field surveys in 2010 revealed their distribution within Cauvery Wildlife Sanctuary was restricted to a 30 km stretch on the left bank of the Cauvery river, between the confluence points of tributary rivers Shimsha and Arkavathy. Apart from this expanse, these giant squirrels are also found in Srivalliputtur and Palani hills in Tamil Nadu and along the Chinnar river in Kerala. They have also been sighted in some areas of Dharmapuri, near Salem in Tamil Nadu. However, studies on the distribution and status of the squirrels in most areas are few and far between.

Grizzled giant squirrels are solitary creatures and they have territories that encompass many trees that they depend on for food. While these squirrels are not easily seen, signs of their presence are hard to miss. Grizzled giant squirrels build large nests called dreys, using leaves and twigs. They build multiple dreys at strategic locations as they come in handy when escaping aerial predators such as eagles. These squirrels also use an interesting tactic to escape predators; when pursued by a predator, they run very quickly for a short distance before coming to a sudden halt. This confuses the predator, giving the squirrels a chance to escape.

Challenges to their continued existence

Loss of canopy connectivity and degradation of habitat are major factors that threaten the survival of the grizzled giant squirrels. The riparian stretch at Cauvery Wildlife Sanctuary is not only very narrow; 30m at its widest, but also has many breaks in it due to naturally occurring rocky outcrops. The giant squirrels are therefore restricted in their movements to smaller patches within the riparian area.

Canopy connectivity is highly essential for arboreal species such as these squirrels to survive. They are dependent on it to access food, escape predators and to move from one point to another.

In the Cauvery Wildlife Sanctuary, these squirrels mainly feed on the fruits, leaves and bark of trees such as the arjun, tamarind, mango and jamun. Aphid eggs and larvae found within the galls (right) on jamun leaves are a rich source of protein for the squirrels during the summer months when food is scarce. Photos: Ipsita Herlekar

On a regular basis, hosts of people from neighboring towns and villages visit the ancient temples on the banks of the Cauvery river at Mutathi and Bheemeshwari, often camping beneath the very muthee trees the squirrels live on. To avoid being seen, the shy squirrels hide away in high branches or in their dreys for long periods of time. This cuts down on the time they would otherwise have spent on feeding or socialising with their own kind. Such disturbances over an extended period can alter the natural behavior of the species.

The local villagers too lop away branches of the riparian trees to feed their cattle during summers, when the surrounding forests are as dry as matchsticks and not much is left to graze. This not only disrupts the canopy connectivity but also opens up the riparian habitat to invasive scrubs. These invasive scrubs neither help the squirrel in their movement nor are they a source of food, but they envelope the area and prevent young saplings of the riparian tree species from growing, thereby deteriorating the squirrels’ habitat.

Locals lop the branches of trees such as the arjun (Terminalia arjuna), locally known as the muthee, as feed for cattle during summers. As canopy connectivity is lost due to such practices, the squirrels are increasingly forced to live in isolated patches of forest. Photo: Ipsita Herlekar

In addition to the increasing threats to their survival, there is a proposal by the Karnataka government to build  the Mekedatu  Balancing Reservoir, a gravity dam on the Cauvery river with a capacity to store 65 tmc of water to provide water to the ever expanding Bengaluru city and its surrounding areas. This proposed dam was estimated to submerge over 12,300 acres of Cauvery Wildlife Sanctuary and adjoining reserve forest area, including a large stretch of prime grizzled giant squirrel habitat. Providentially, the strong protests and interventions by wildlife conservationists and environmental activists, the government of Karnataka has, for the time being agreed to consider shifting the location of the dam outside of the protected forest area.

The grizzled giant squirrels at Cauvery Wildlife Sanctuary have so far been able to dodge many hazards that threaten their survival and their habitat, but the question to be pondered is “for how long”? If necessary and crucial measures are not taken to halt the degradation of the riparian habitat, the grizzled giant squirrels might disappear unnoticed, from the only place they are found in Karnataka.

is a wildlife researcher turned science communicator. She writes on all things science-from ecology to astrophysics and everything in between.

Fleet-footed Tahrs: Lords of the Pinnacles