Guardians of the Sundari: Reviving the Mangroves in the Sundarbans

Thirty-eight-year-old Pushpo Mandal is considered a “tiger widow.” She is from Rajatjubilee village, on the fringes of the Sundarbans — the world’s largest mangrove forest, and habitat of royal Bengal tigers. Her world came crashing down in August 2019, when she lost her husband to a big cat in these mangrove forests. He had gone fishing and crab catching in its wild streams with fellow villagers, never to return. Despite suffering this most grievous loss in the forests of the Indian Sundarbans, Pushpo is concerned that its key mangrove species, the Sundari tree, that once flourished extensively and perhaps gave these forests its unique name, is fast disappearing (Sundarban means beautiful forests).

Though the species is hard to nurture in the scenario of climate change, these women have already raised nearly 5,000 saplings and continue to grow more.

The loss of Sundari trees (Heritiera fomes) from the Sundarbans worries other villagers too. About 18- 20 “tiger widows” from the villages of Annpur, Patharpara, and Rajatjubilee on Gosaba island in the Sundarbans of West Bengal, have come together to revive this vanishing species. They have created exclusive plantations of this mangrove species in vacant land outside their villages. Though the species is hard to nurture in the scenario of climate change, these women have already raised nearly 5,000 saplings and continue to grow more. 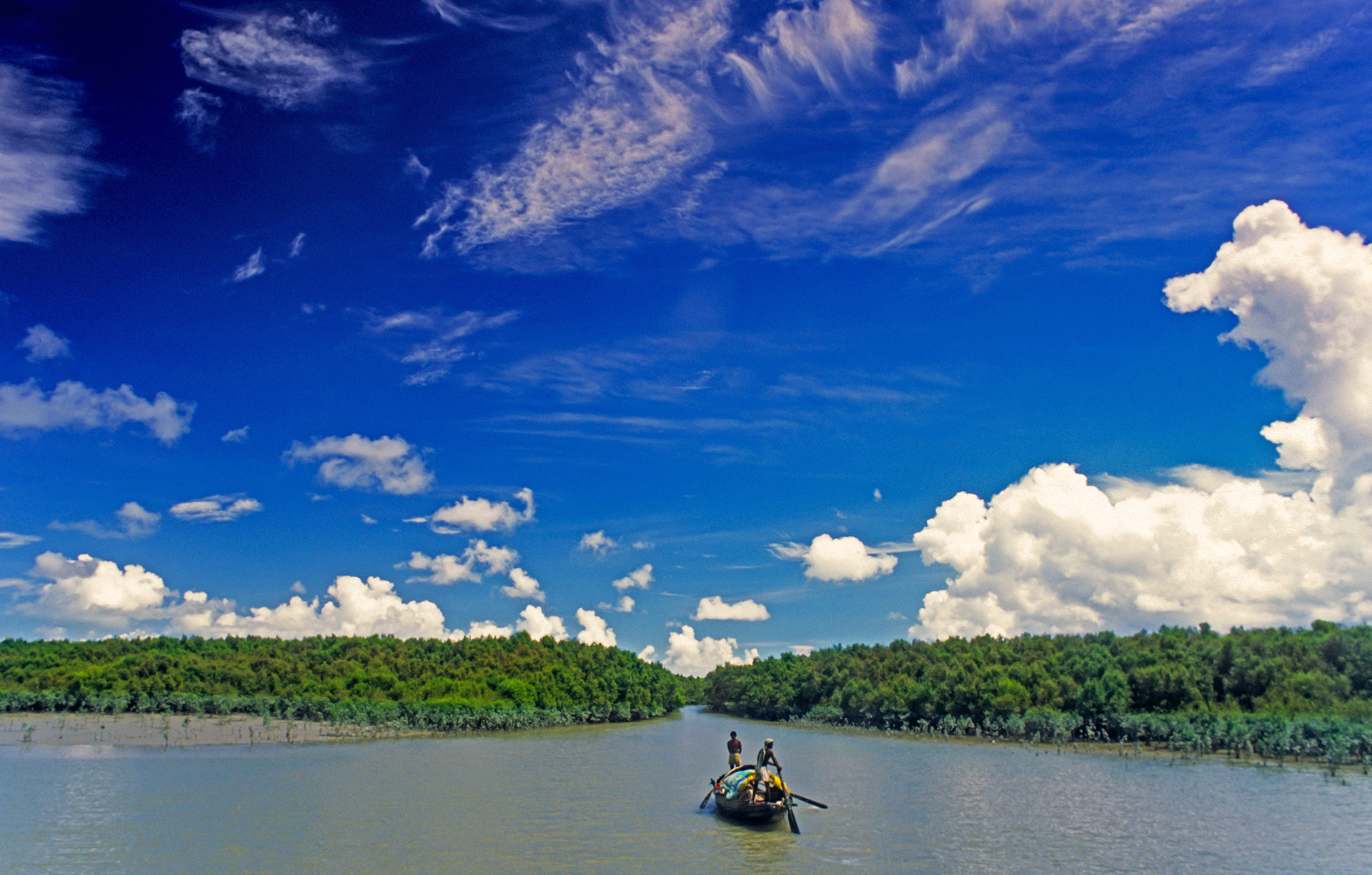 The Sundari is one of the most extensive species of mangrove tree species in the Sundarbans. Its hard wood is often used by fishermen to make their boats. Photo: Dhritiman Mukherjee The world’s largest mangrove forest, the Sundarbans, is said to be named after the Sundari tree found in this delta. It bears small, bell-shaped flowers, which vary in colour from orange to pink. Cover photo: Dhritiman Mukherjee

“There are numerous species of mangroves in the forest and they have been the lifelines of our local communities, who have been living around these forests for generations. However, Sundari trees have always been exceptional,” says Pushpo. They bear beautiful flowers that attract bees which produce prized honey. Leaves, bark, root, and other parts of this plant have rich medicinal and analgesic properties. Traditional medicines made from them are used in the treatment of gastroenteritis and other stomach ailments, arthritis, inflammation, fever, as well as diabetes. Further, its branches are valuable as timber; the wood is used to make boats and deployed in the construction of homes, she says.

“There are numerous species of mangroves in the forest and they have been the lifelines of our local communities, who have been living around these forests for generations."

There are several factors that have led to the degradation and loss of tree cover, not just of Sundari but of all trees, in the Sundarbans.  Much of the stress on these mangrove forests has come from human development activities — clearing of land for agriculture, timber and fuel wood collection, and pollution from other economic activities including aquaculture.

When the sea rises

Unfortunately, this signature tree species of the Sundarbans is also losing out to climate change, which is causing increased salinity in the Sundarbans delta. According to oceanographer and marine science expert Dr Abhijit Mitra, sea levels are rising across the world as a result of global warming, and this rise is found to be at the rate of 3.14 mm annually along the West Bengal coast. Former head of the Department of Marine Science, University of Calcutta, Dr Mitra further explains that five major rivers draining into Bay of Bengal through the central Sundarbans have lost their upstream connection with the Ganga due to heavy siltation. The steady decline in the supply of freshwater and the rise of sea levels has increased salinity in the soil and water.

Fortunately, however, the two major rivers Hooghly and Muriganga flowing through the western Sundarbans are still connected to Himalayan glaciers, through the Ganga, and also receive the water discharge from the Farakka barrage. “Hence in the two given situations, while salinity in the central Sundarbans area has risen to 15 ppt (parts per thousand), with an annual rate of increasing salinity ranging between 0.9 ppt to 4 ppt (for the last 30 years), it is relatively lower in the western Sundarbans with the figure varying between 8-10 ppt,” he says.

Sundari trees are adapted to thrive in areas with a specific salinity. The tree (left) can grow up to a height of 25 m, has elliptic leaves, and flowers which bloom in March-April (right). Photos: Dhritiman Mukherjee

Sundari trees, unlike other mangrove species, require low saline conditions (3-8 ppt) for optimum growth and survival. Dr Mitra adds that the species is already facing threat of extinction in West Bengal, and it is listed as “endangered” on the IUCN’s Red List. Increasing salinity is resulting in this mangrove species acquiring the “top-dying” disease. “Disease is predominant in high saline areas and is aggravated during the dry months (April and May), when the supply of freshwater is even lower and is accompanied by high rates of evaporation,” he says.

Dr Mitra is an expert on mangrove ecology, and has the book Mangrove Forests in India: Exploring Ecosystem Services (Springer) as well as various research papers to his credit. He goes on to elaborate that an increase in saline conditions retards seed germination and reduces their growth and development. The species thus becomes stunted, rare, and gradually disappears. “The alteration in growth due to difference in salinity is clearly perceptible in central and western Sundarbans, with the latter still harbouring the diminishing species,” he adds.

Climate change has caused an increase in sea levels in the Sundarbans, this, coupled with a decrease in freshwater levels is causing a decline in the numbers of Sundari trees. Photo: Dhritiman Mukherjee

However, such challenges do not seem to deter these eco warriors against planting Sundari trees around their villages. Networked under a community organisation called Sundarbans Rural Development Society (SRDS), their tree revival efforts kicked off in 2018. Their work is being supported by a Kolkata-based society, Direct Initiative For Social & Health Action (DISHA), which is a non-profit working on issues of environmental protection, health, and education of local communities in the state.

It is sheer delight to see about 2.5-3 km of erstwhile vacant stretches of land along the inner edges of village embankments lined with Sundari saplings. These embankments are earthen ridges about 1-2 m tall, erected along the periphery of the villages to prevent the incursion of saline seawater into the settlements. Being located at the mouth of the Bay of Bengal, the villages get washed by alternate cycles of high and low tides every six hours. During high tide, the streams get flooded with brackish seawater, but are checked by these embankments, which would have otherwise make the soil in the villages saline and unfit for agriculture, or could even enter homes and damage people’s assets.

The soil along the outer edge of the embankment, facing the streams (being regularly hit by tidal surges) is obviously more saline than the part facing the villages. “We made the initial mistake of planting the Sundari saplings along this outer edge of the embankment, without realising the possible impact of salinity on their survival” says Gita Mridha, a member of the group. She explains that the first lot of seedlings was lost, both at the plantation sites and nursery beds, which were also being developed close to the stream bed.

After the initial failure, the women renewed their efforts. “We have been careful to choose the correct location, along the embankments, on the opposite side of the tidal streams that crisscross the landscape,” says Gita. Even the nursery was shifted to the interior of the village, away from the tidal stream. The women began by scouting for these rare, hard to find seeds of the Sundari from river banks left behind by the ebbing tidal waters. The seeds were planted in small gunny bags filled with soil, and reared in the nursery till they were 75-90 cm tall. It takes about 90-100 days for them to develop into saplings of the right height. “We are careful to water them from rain-fed ponds in villages that have ‘sweet’ not salty water,” says Pushpo, who takes special care of the saplings in the nursery. Today, the nursery has nearly 850-900 saplings at various stages of growth.

Women from Annpur, Patharpara, and Rajatjubilee on Gosaba island are leading efforts to revive the Sundari tree by planting saplings on vacant land outside their villages. They fence off the saplings with bamboo strips and net fencing to protect them from grazing cows and goats. Photos: Moushumi Basu

Once they are tall enough, the saplings get planted along the embankment on the opposite side of the stream. “Here the soil is not as salty as compared to the outer edge, and the survival rate of the saplings is found to be nearly 90-95 per cent,” says Alapi Mandal, another member of the group. She further adds that the saplings need to be planted at least four feet away from each other to leave adequate space for the elaborate root systems of the species, which in turn reinforces the earthen embankment from the shock of rising tides.

The sprouting Sundari seedlings at the plantation sites are vulnerable to grazing animals, like goats and cows, and have to be barricaded with bamboo strips which are wrapped in net fencing for added protection. The seedlings are watered regularly from local ponds closest to the sites and painstakingly nurtured.

“We even patrol along the sites, with sticks in hand, to maintain vigil,” says Alapi. The saplings need to be given individual care, especially since the soil is clayey and becomes hard. The earth at the base of the saplings thus needs to be dug up every fortnight, for percolation of water to its roots,” she says. All this effort, care and vigilance has paid dividend and the saplings are growing taller, and bringing smiles to the faces of the women.

As Sasanka Sekhar Dev, Secretary, DISHA points out: “The best part is how these women continue to love the Sundarbans forests, despite having lost their near and dear ones, time and again, to tigers. They harbour no animosity against the Sundarbans, and are contributing to restoring its vanishing species in their own small ways.”