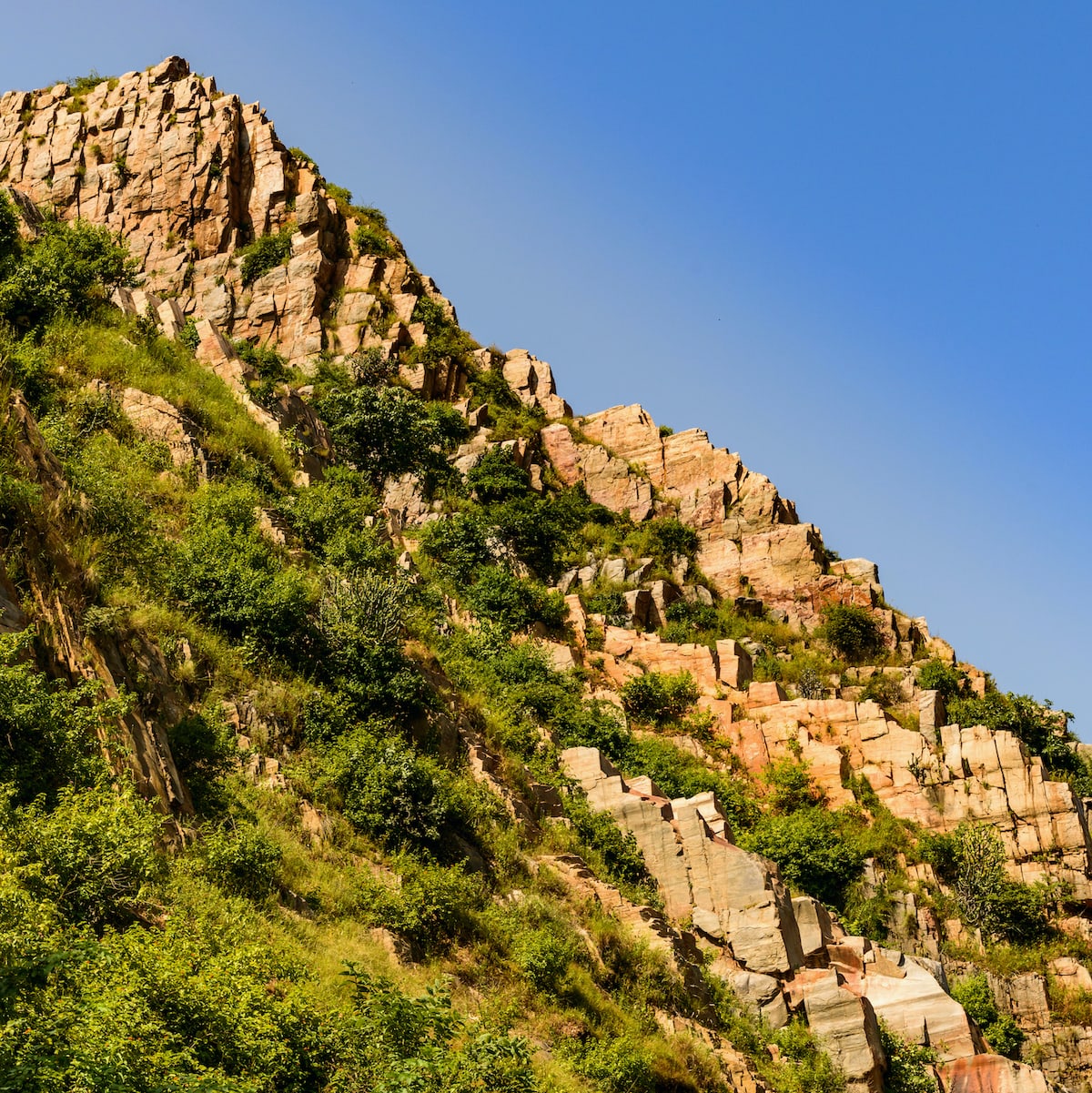 In August 2020, the Supreme Court of India ordered the Haryana authorities to stop road construction in the ecologically sensitive zone of Aravalli hills. Its order came after a media report exposed the illegal flattening of Aravalli hills to build a road to farmhouses in Bandhwari near Gurgaon-Faridabad road in Haryana.
Previously, there have been court orders against illegal mining which has been rampant in this region. Many have pointed out that disturbing the ecological balance in an already emaciated landscape around Aravalli will further vitiate the air quality and deplete the water table in the surrounding areas of Haryana, threatening the lives of millions living there. Mongabay-India too had earlier reported the violation of several environmental norms in this sensitive forested zone.

Aravalli is almost 700 kilometres-long mountain range that starts from India’s western state of Gujarat, travels through Rajasthan and Haryana before terminating at Raisina hill, at the heart of national capital Delhi. Most of the Aravalli hills – around 550 kilometres of its length – is in Rajasthan, yet some part of it also falls in some of Haryana’s districts such as Gurugram, Mewat, Faridabad, Palwal, Rewari, Bhiwani and Mahendragarh. The range has several peaks, hillocks and ridges, with different elevations, having a highest of 1,732 metres above mean sea level at Guru Shikhar peak, Mount Abu. It is one of the oldest mountain ranges in the world and full of minerals, flora and fauna. Many water streams originate from Aravalli and it stands as a barrier against the Thar desert to protect parts of Rajasthan, Haryana and Delhi from dust, pollution and sand storms.

However, mining, deforestation and encroachment have wreaked havoc with it. Though the Rajasthan government has allowed mining in Aravalli under “legal safeguards”, it is completely banned in Haryana by court orders. Yet, cases of mining and other environmental violations are reported at regular intervals.

“No mining is allowed in the Gurugram, Faridabad and Mewat district of Haryana. It was banned in 2002 by a Supreme Court order. Still, we have sporadic cases here and there. The real problem and threat for Aravalli in Haryana is unrestrained construction and encroachment which has increased manifold in the last few decades,” a senior forest officer in Haryana forest department told Mongabay-India.

Activists say that encroachers have a “very strong lobby” and they wield “close nexus with bureaucrats and politicians” of state.

“If you talk about Aravalli in Haryana, encroachment is the most compelling issue which is taking place in various parts of the state. The fragmentation, encroachment and tree felling in the forests is our main concern. One day we hear about tree felling somewhere, while another day about some flattening of hills elsewhere or dumping of waste in the hills. If you want to see it you can verify this by looking at the (satellite) images on Google. How will you save Aravalli if destruction continues like this?” questioned Vivek Kamboj, an activist who is the petitioner in many cases filed in court for protection of Aravallis.

The estimated population for Delhi with its adjoining cities of Gurugram, Faridabad, Noida and Ghaziabad, which forms part of the National Capital Region, is about 30.2 million. In the last three decades, the population of the region has gone up rapidly and in just the last 10 years the number has shot up by an estimated 40 percent. This rapid growth in Haryana’s Gurugram led to huge pressure on resources, especially land. The boom in real estate posed a threat to large tracts of the Aravallis in the region. For a state like Haryana, which is India’s most forest deficient state with officially just 3.5 percent of its total area recorded as forest cover, this rapid development has put heavy pressure on ecology.

Aravallis at the border of Delhi plays the role of green lung for millions of people of Delhi-NCR region. Photo: Hridayesh Joshi
Cover photo: A picture of the hills of Aravallis. Cover photo: Amit kg/Shutterstock

Although Aravalli hills in Haryana are guarded against mining by several court orders and executive rules, big real estate and other private companies have engineered ways to circumvent the law to flatten the hills, encroach and appropriate the land illegally.

Legal experts and activists allege that bureaucrats and politicians constantly try to make way for real estate and construction companies in this zone. Mongabay-India had reported last year how citizens opposed a law amendment that could have potentially opened a large tract of the fragile hills for construction.

“If you ask me whether laws for the protection of Aravallis are enough, I will say yes, it is. The real issue is there is no enough will to protect the Aravallis or implement the law. In 1996, the Supreme Court asked (Haryana) to make an inventory of the deemed forest area and again in 2012 but what the State did was to list only those areas which are already recorded as forest. The 1996 judgment expanded the scope of Forest Conservation Act (FCA) 1980 to include forest land which was not recorded as forest but confirmed to the dictionary meaning of forest. This direction is good enough in itself to protect the entire Aravallis. Though mining has stopped this area is facing regular threat from construction activities because of inaction from the officials,” lawyer Rahul Choudhary, who is the founding member of the Legal Initiative for Forest and Environment (LIFE), a legal firm working on issues related to environmental law, told Mongabay-India.

“Nobody says that development should not happen but development has to go hand in hand with conservation. If you can’t preserve 3-4 percent of the (forest) area then you are basically going to have an ecological disaster,” M.D. Sinha, a senior Indian Forest Officer, who worked as a conservator of forest in Gurugram told Mongabay-India, but right now is posted as the additional chief executive officer of the Gurugram Metropolitan Development Authority and additional director of the Haryana Institute of Public Administration.

The rampant illegal mining in the Aravalli range in Haryana is also threatening the future of the whole region. It is estimated that Haryana has more than 20,000 hectares of Aravalli. Out of this Gurugram alone has 11,256 hectares of Aravalli. This vast landmass provides a massive green lung to Delhi and surrounding areas.

Aravallis in Haryana is threatened by encroachment or mining. Photo: Avinash Kumar Chanchal

“In this densely populated region of Delhi-NCR, we know this is the only barrier between us and (Thar) desert. If we destroy this one line of defense that we have which prevents the desertification and in-road of the desert dust which is going to contribute hugely to the local pollution problem … Therefore, we need the green tree cover as a protective barrier to keep the oxygen balance here,” Anumita Roychowdhury, an air pollution expert and executive director with Centre for Science and Environment (CSE), told Mongabay India.

“Since we have such urban growth with concretisation, we needed to reduce the heat tidal effect. Heat tidal effect also aggravates pollution. Besides the dust particles are also the carrier of toxic pollution that comes from combustion sources. So, I think this is non-negotiable. Aravallis have to be protected at all costs,” Roychowdhury told Mongabay India.

Delhi, Gurugram, Faridabad, Noida and Ghaziabad are already counted amongst the 20 most polluted cities of the world. Aravalli, what could have provided an effective sink to soak this pollution, is endangered itself.
“When we look at the google earth images of Aravalli in the western flanks, there are big deposits of sand or sand-dunes. So, basically all the hot winds which come from the west and carry sand with them, they get deposited at the western flank. So, for both these perspectives, Aravalli is very important,” explained environmental activist Chetan Agrawal, who is among those demanding the Aravalli to be declared a protected zone.

Air quality isn’t the only issue. Experts note that the protection of Aravalli from illegal mining is also critical to maintaining the hydrological balance of the region. They state that if it continues then it may bring an irreversible transition into the lives of millions living in the region.

“In the pursuit of rapid urbanization, we have cemented and covered all the ground of our megacities so there is no way for rainwater to penetrate the soil and recharge the water table. Therefore, in Delhi and its surrounding areas like Faridabad and Gurugram, we are left only with whatever Aravalli patch we have and since Aravalli range is fractured so the rainwater seeps through these cracks and recharges the groundwater through aquifers. Experts will tell you that it (Aravalli) has a good (water recharge) potential of around two million litres per hectare. This makes Aravalli so important,” environmentalist Vijay Dhasmana told Mongabay-India.

The falling water table in Delhi and nearby areas has raised many alarms over the past few years. While Delhi is losing the groundwater level by 0.5-2 meters every year, Gurugram’s situation is deteriorating much faster.

Amidst challenges some hope

Amidst the encroachment of land and destruction of greenery in a forest sparse land, conservation efforts, whether by an individual or community matters, a lot.

For instance, the development of the Aravalli biodiversity park in Gurugram is one such ray of hope towards the conservation efforts in the area. Here citizen movements supported by the Municipal Corporation of Gurugram (MCG) restored a vast patch spread in 380 acres. The park was started in 2011 and at present has around 300 plant species. Besides it is home to more than 200 bird species along with scores of reptiles, insects and other fauna.

The Aravalli biodiversity park in Gurugram is an example of a successful conservation effort. Photo: Vijay Dhasmana.

Dhasmana, who curated and rewilded the park with many other experts and committed citizens, said, “In 2011, we first made a list of about 200 forest species native to the rocky northern Aravallis. Some of them had disappeared from view but there was enough evidence to know that they were once present in our region. Now we had to get hold of the seeds of all these species, and take complete charge of rewilding the park landscape.”

According to Dhasmana, in 2012, a massive collection drive for seeds and vegetative cuttings by visiting wild and semi-wild areas near and far started and it showed the result. “I think what we have achieved at the Aravalli Biodiversity Park, Gurugram, is that a mining site in Aravallis can be ecologically restored. This restoration work has become a benchmark and inspiration for several biodiversity parks that the state government is planning in Gurugram and Faridabad. The park is a nursery of ideas and hopes that we can bring back the glory of degraded Aravalli forests in Haryana,” Dhasmana told Mongabay India.

This story was first published in Mongabay India.