Investigations show that meat of protected turtle species is sold in several markets in India. Such ‘wet markets’ present an acute health hazard and need to be looked into urgently in the face of the COVID-19 pandemic 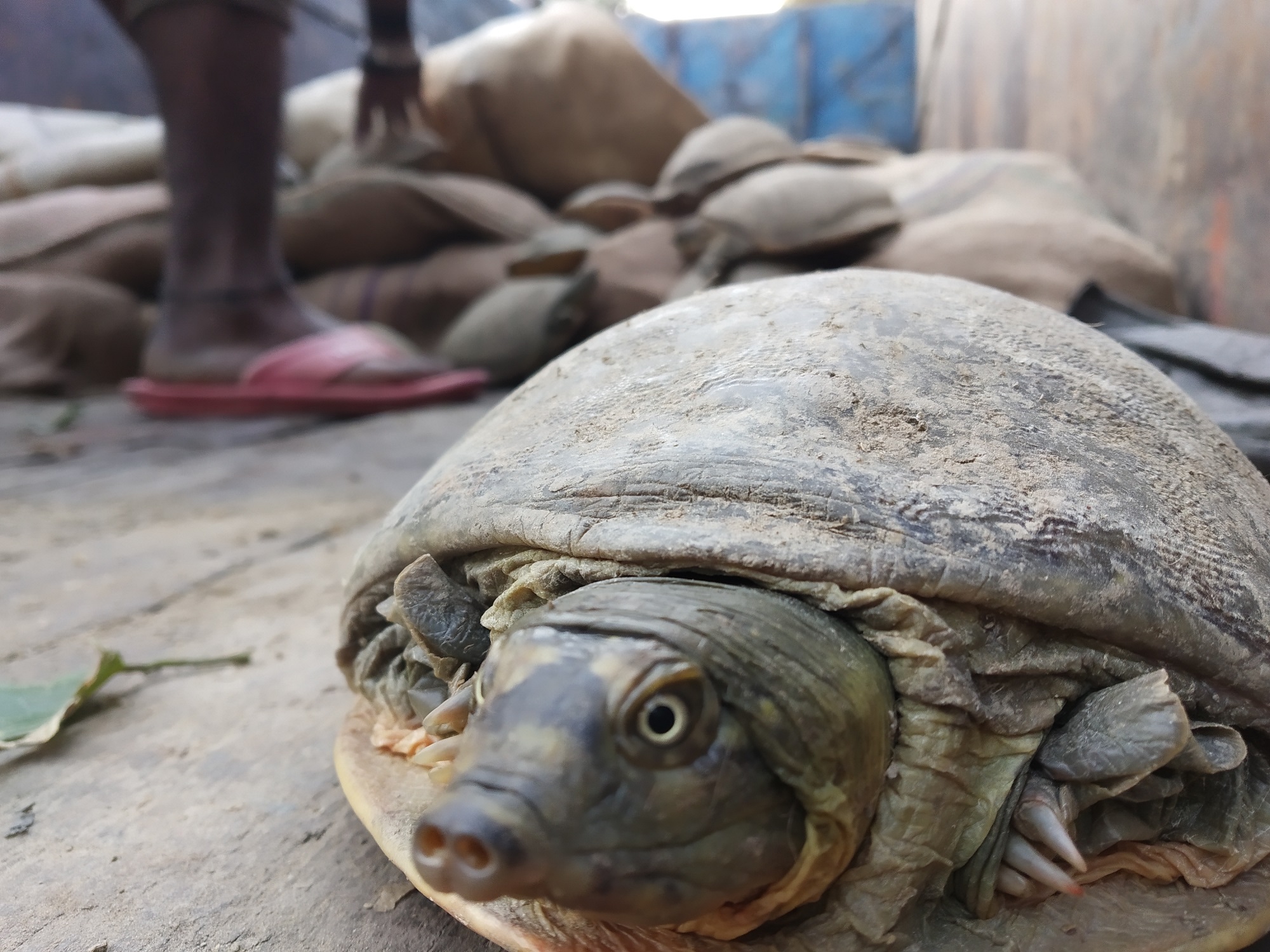 Leaving his stall at the Golbazar Maharajganj Fish Market in Agartala, the vendor headed out toward another shop, a hovel really, tucked between the market’s boundary wall and a stack of Styrofoam boxes. He opened one, hauling out a mutilated carcass of a peacock marked softshelled turtle (Nilssonia hurum) and chopped it into pieces for a waiting customer. Money exchanged hands. It is not kosher to quote rates of wildlife as it encourages trade and though the prices are somewhat higher than, say goat meat, by putting a price on the priceless — a rare protected Schedule I species with the level of protection accorded to a tiger — he had sold the turtle cheap. Also visible were hollowed-out shells of the soft-shelled turtle, the Indian flapshell (Lissemys punctata), another Schedule I freshwater species. Information gleaned from the traders indicated that about 4,000 turtles are sold annually in Golbazar, and they assure that any quantity required can be made available.

The quantities could be higher in Battala, another fish market in the capital of the northeast Indian state of Tripura. Here, turtle meat is sold openly and business is brisk with a stream of customers. Carcasses, mainly of the peacock marked soft-shelled turtles are chopped and sold, while a few flap about haplessly in a bit of murky water in buckets and boxes — some 100 feet away from a forest department signboard extolling saving turtles and warning about the illegal sale of its meat.

An investigation into the illegal turtle trade in Agartala, in February 2020, carried out with the help of local informers and investigators, revealed that protected turtle species are being sold openly and blatantly.

The trade has persisted for years: as per reports in 2009, 2015 and in 2017, the Bangladesh-based Creative Conservation Alliance conducted a market survey and found turtle meat in Agartala, which is close to the Bangladesh border.  Bloggers have written about its open sale in fish bazars and turtle meat curry being offered in small eateries in the city over the past decade. The turtles are smuggled in from Bangladesh into Agartala; equally, turtles are smuggled out to Bangladesh, a major hub for turtle meat trade, from India.

Turtles are sourced from the Indo-Gangetic plains, mainly from Uttar Pradesh, Bihar, Uttarakhand, West Bengal; and Odisha, Andhra Pradesh in the Mahanadi basin. The scale of poaching is huge:  in just one seizure over 6,400 soft shell turtles, destined for the food markets of Kolkata, were intercepted in Uttar Pradesh in January 2017. This haul was part of 14000 turtles seized in Uttar Pradesh and West Bengal in the first two weeks of 2017. A 2019 study by TRAFFIC-India found that at least 110,000 (1.1 lakh) turtles and tortoises entered the illegal trade in the 10-year period between 2009-2019.

This is the proverbial tip of the iceberg; “with seizures representing only a fraction of the actual trade,” says Saket Badola, head, TRAFFIC India. Such huge off-take is driving the species to extinction. Shailendra Singh, director of the Turtle Survival Alliance-India Programme says that stretches of the Ganga in Bihar and downstream of the Farakka Barrage in Bengal have virtually been emptied of soft-shell turtles. The northern river terrapin Batagur baska, historically found abundantly across Orissa and West Bengal in India through Bangladesh and Myanmar, is now possibly extinct in the wild. Surveys conducted by Singh along with other colleagues, for over 12 years, have yielded one juvenile in the Indian part of Sundarbans, and two toward the Bangladesh side. Along with alteration and destruction of riverine habitats, the key cause for this functional extinction is poaching for the pot.

Yet, the vanishing of turtles inspires little concern or action, even within the conservation community, or concerned government agencies. Raids on suspect markets are sporadic, and the follow-up, lackadaisical. For example, over the past decade, there have been no more than five raids in Agartala and no arrests so far. The trade temporarily goes undercover, or at best cools off for a while before it is back to business as usual. Turtles are not high-profile species and hence the illicit trade flourishes off the radar at scales leading to population collapses. Agartala is a classic example, where this brisk, blatant illegal trade continues. Enforcement agencies and experts confide that the sale of turtle meat in such wet markets is rampant across the country. India is a consumer of wild meat, not just a source of illegal wildlife trade, as is traditionally believed. “In several parts of India wild meat is consumed, and sold, driven mainly by the traditional practices of unscientific beliefs,” remarks Badola.

Meat of a softshelled turtle being sold at Golbazar market in Agartala. An investigation into the illegal turtle trade in the city in February 2020 revealed that protected turtle species are being sold openly and blatantly. Indian flapshell turtle seized. Cover Photo: Arunima Singh/Turtle Survival Alliance

West Bengal, in particular, is a major hub, where turtle meat is a delicacy, and in high demand more so during the festive season. It’s available–on and off the counter—in fish markets across Kolkata, Howrah and Purulia. Informed sources, who wish to remain anonymous, confide that about 150 kgs of turtle meat is sold daily in haats and fish markets across the east and west Midnapore districts.  Other such markets, where turtle meat is reported to be available are Patna, Munger and Muzzafarpur in Bihar; Bokaro, Jamshedpur, Ranchi and Dhanbad in Jharkhand; Gorakhpur, Mugalsarai-and Varanasi—also home to the country’s only turtle sanctuary—in Uttar Pradesh.

This is not an exhaustive list, merely indicative, of the wet markets illicitly selling turtles and occasionally other wild meat and derivatives, from porcupine quills to lizard oil to manta rays, all protected species by law.

The scale of the seizures has lent a false sense of complacency, of there being an inexhaustible ‘supply’ of turtles; the lessons of the passenger pigeon, which crashed from billions to none in a matter of 50 years, are forgotten. Closer in time, and place, is the dramatic decline by 97 to 99.9 percent of vulture population between 1992 to 2007.

Worrying as the specter of extinction is; an urgent, and imminent concern is the health hazard that the rampant sale of wild meat presents in view of COVID-19, with over 375,498 confirmed cases reported and 16,362 deaths from 196 countries (as of March 25, according to the World Health Organisation). While conclusive proof is yet awaited on the coronavirus’ links to a Chinese seafood market and a source animal, what we do know is that wet markets such as Wuhan, and for that matter Agartala’s Golbazar or the thousands such that exist in Asia and Africa allow for easy transmission of viruses and other pathogens from animals to humans. Such wet, grimy markets are havens for what science writer David Quammen calls the ‘spillover’ of infectious diseases from animals to humans.

This spillover, Quammen argues, happens, “because humans, as hunters and consumers of meat have placed animals in close proximity to each other and to people, giving way to disease-sharing opportunities”.  It increases the risk of diseases mutating and growing more virulent as they spread. Keeping mixed species in close proximity allows for their excreta, blood, saliva and other bodily fluids to mix, facilitating easy animal to human transmission.

The coronavirus family is the same group of viruses responsible for the SARS epidemic of 2002-03, killing nearly 10 percent, 774 people, of those infected, though its spread was contained. Other major epidemics in the recent past include the Middle East Respiratory Syndrome (MERS) and Ebola virus disease. All have emerged through close contact of humans with wild animals, majorly through hunting, consumption or trade.

Yet, there seems to be no let-up in the illegal wildlife trade, the third-largest type of illegal trade, after drugs and arms, globally, and locally.

We cannot afford to ignore the Golbazars and the Battala bazars of the world, insignificant as they may seem. Each such unsanitary and unregulated market is a risk to public health, biosafety, economic, and global security.

This is not being alarmist. Reality is, when — and if — the COVID-19 goes away, there are other pathogens circulating in wild animal populations, and we continue to create conditions to allow for their mutation and easy transmission, through the illegal wildlife trade and destruction of habitats. Three-quarters of new or emerging diseases that infect humans originate in animals, as per the U.S. Centers for Disease Control and Prevention (CDC).

We cannot afford to dismiss the illegal trade of wildlife as just a matter of loss of a few animals, best left to ‘tree-huggers’ or environmentalists. We cannot afford to think of the trade only in terms of conservation; as is evident it is a public health, economic indeed an existential issue.

There has to be an immediate, urgent crackdown on such markets and on the illegal trade of wildlife. And this has to be a collective effort of forest, health, food and bio-safety authorities aided by other enforcement agencies.

It is difficult to imagine any positives of the COVID-19 pandemic, but if it serves to provide the impetus to address, and eliminate, wet markets and the flourishing illegal wildlife trade; it may well prevent the next pandemic.

This story was first published in Mongabay India