Is the Lesser Florican Jumping to Extinction?

The smallest member of the bustard family faces a peculiar conundrum: breed or be safe?

Many birds live a contradictory life, particularly the males. For example, most small species try to avoid predators by living an unobtrusive life, and fleeing as soon as they encounter any danger. Their security is tied to their ability to blend in, and remain inconspicuous. However, these same males also have to mate with females — as many as possible — in order to spread their genes. To do this, they have to be attractive, a status that is achieved by becoming bright, and conspicuous, and sometimes, singing loudly: In short, the males have to show-off. This self-advertisement puts them at the risk of predators. This is the dilemma faced by the lesser florican, one of the smallest bustard species in the world: to hide from predators or to show-off to attract a mate.

During the breeding season, male lesser floricans establish territories in the grasslands. The birds arrive with the monsoon on the grasslands of northwest India, western Madhya Pradesh, eastern Rajasthan, Saurashtra and Kutch, and north Maharashtra.
Frequent physical fights and chasing are common. Territory formation takes 10-15 days, depending on the rainfall and vegetation growth. Once the battles are settled and adult males have established territories — 500 m to 800 m from each other, smaller in dense population such as Velavadar National Park, Gujarat — the business of attracting females starts. 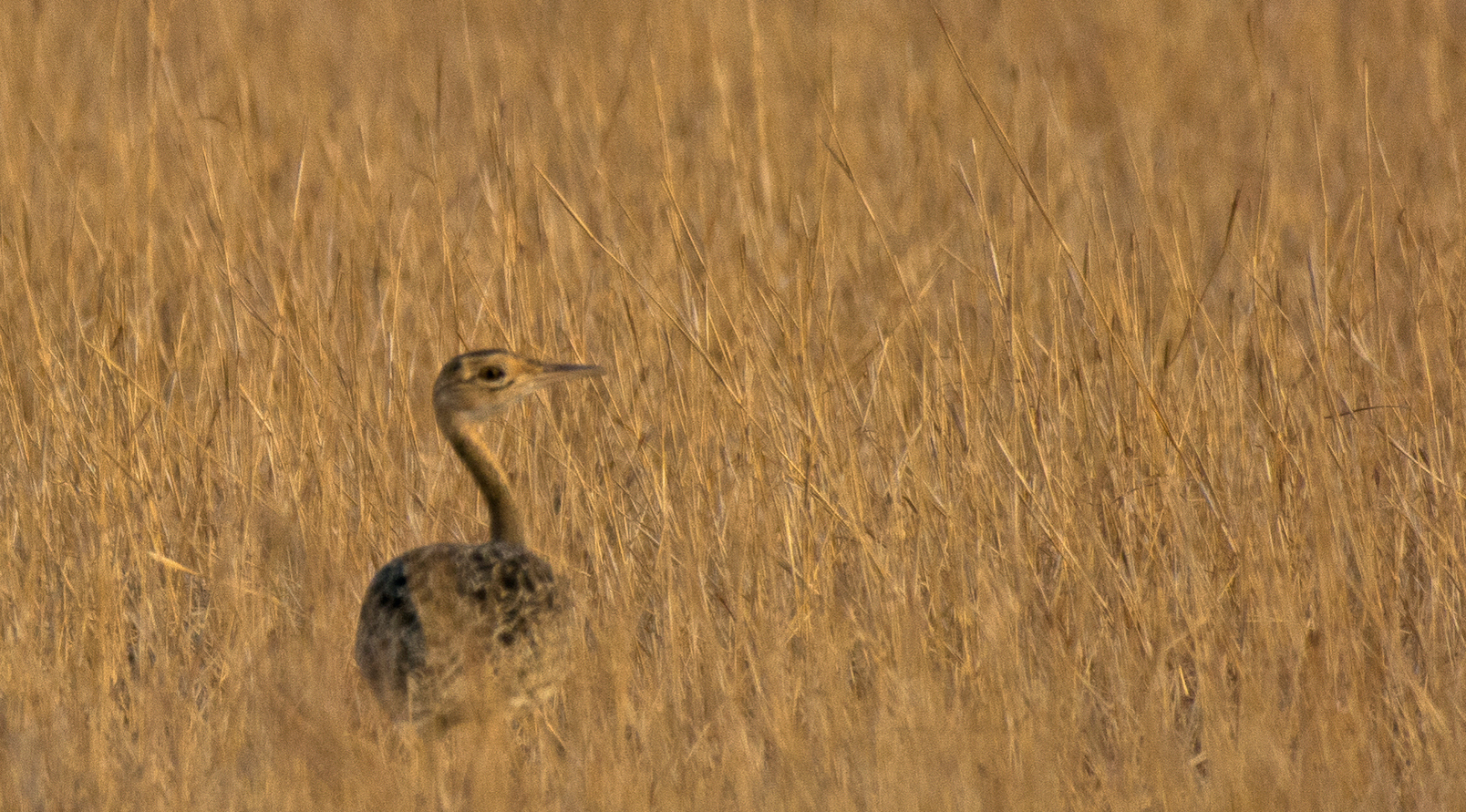 Male lesser floricans have black and white plumage, while females and young birds are brown in colour making them harder to spot, especially when the grasslands are brown. Photo: Aviral Jadhav

This is achieved by a series of leaps and quirky sounds. The male florican jumps above the vegetation to a height of about 2-3 m, producing a sound similar to the croaking of a frog. Some people suspect it comes from the bird’s beak, but during research conducted in the Sailana Kharmour Sanctuary, Madhya Pradesh, in the mid-1980s, me and my former student, Dr Ravi Sankaran realised that the sound probably comes from modified primaries (a type of feather). This needs to be scientifically investigated.

We also found that that during an overcast day, with frequent drizzles of rain, a male florican may jump between 350 to 400 times a day. The intensity of the display jumps depends on the season, weather, and the presence/absence of females. During mornings of peak breeding season, display jumps were as frequent as three per minute. As the day becomes progressively hotter, the display decreases or stops. This also happens when the breeding season comes to an end. In addition, we found that display ceased when an aerial predator, such as a hawk or large eagle, made an appearance, and males were quick to hide at this time. 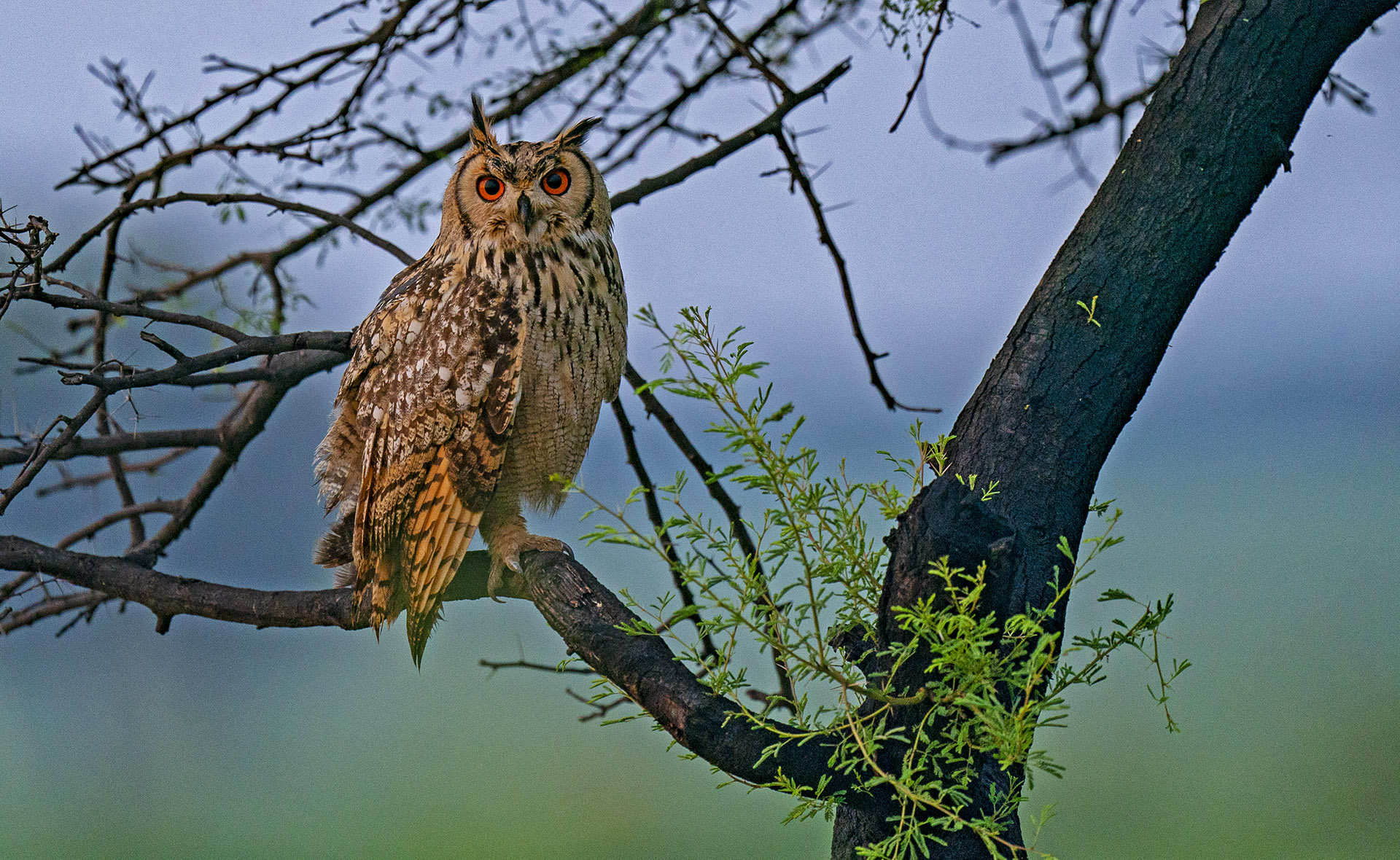 Rock eagle-owl is an aerial predator of the lesser florican. Photo: Dhritiman Mukherjee

The female florican, which is slightly bigger than the male, moves from territory to territory looking for the right male(s) to mate and start a family. It is unclear what traits the females are seeking: Is it the frequency of jumps, or the sound produced, or the quality of the territory? More research with marked birds is required to find this.
The territories of the lesser florican are known as ‘disperse lek’. A lek is a site where many males gather, to put on a display to attract females. In some species, such as Ruff Philomachus pugnax, a type of shorebird, males display close to each other, as little as 1-5 m apart. Many bustard and florican species however, have ‘disperse lek’ where males are about 300 to 500 m from each other.

Once a female has chosen a mate, she walks towards the male, or flies straight into its display ground, causing him to go wild with excitement. First, the male jumps up and down frequently, then he runs towards the female with his head and neck held out horizontally, and finally, he jerks his neck many times.

Mating is rather quick, and only takes a second or two. When the act is done, the female shuffles her feathers and runs or walks away briskly, while the male returns to its jumping site and resumes his display jumps again. No energy lost!

After mating, the female selects an undisturbed place, generally away from males’ territories, and lays 3-4 eggs on the ground in tall vegetation. Finding a sweet spot like this is quite difficult, thanks to the massive destruction and conversion of grasslands, so many floricans nest in crop fields, or on elevated boundaries around agricultural plots. As these boundaries are used by villagers, free-ranging stray dogs, and cattle, many nests are trampled. 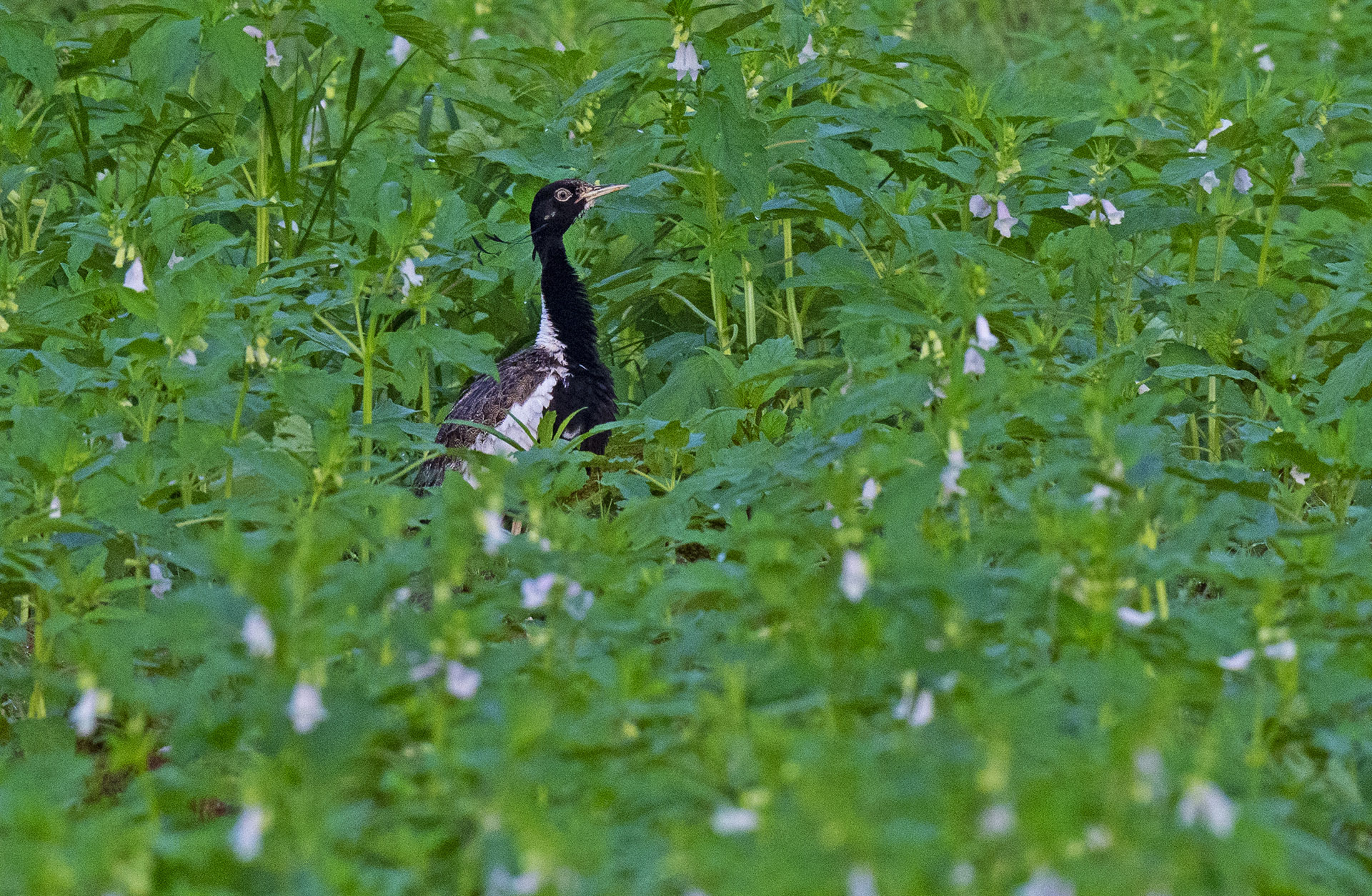 In places such as Sonkhaliya, in the Ajmer district of Rajasthan, the lesser florican is seen in crop fields, due to the absence of natural grasslands areas. It faces frequent disturbance from humans, free-ranging dogs, and pesticides in these habitats. Photo: Dhritiman Mukherjee