The conservation story of the rhino has been a happy one. However, collective action by rhino-range countries is critical to the future growth and survival of the one-horned giant

The fact that India hosts 82 per cent of the world’s greater one-horned rhino population is not a matter of chance. It is a conservation success story that began over a hundred years ago. At the turn of the twentieth century, this species of rhino (Rhinoceros unicornis) numbered less than 100, the decline due to excessive hunting and habitat loss. As a result of extensive conservation efforts undertaken in India and Nepal over many decades, the population of one-horned rhinos has gradually bounced back to above 3,500 globally.

Though rhino conservation in different ecosystems and environments has its individual challenges and solutions, certain common threats, such as poaching, loom large. According to P Sivakumar, field director Kaziranga, there are numerous other challenges in the continued struggle for rhino conservation. Among them are habitat management in the face of growing human encroachment and developmental activities, assessment of the carrying capacity of various parks, and relocation of animals from overcrowded protected areas to new sites.

The greater one-horned rhino prefers to live in marshy, alluvial floodplains where it can graze on lush grasses and aquatic plants that grow on swamps. Kaziranga National Park that lies on the banks of the Brahmaputra river is its ideal habitat. Photo: Dhritiman Mukherjee

Assam’s dedicated rhino protection force, and two battalions of the Assam forest protection force comprising mostly of local youth has helped strengthen the protection the rhino receives. Additionally, a Supreme Court order in April 2019 has clamped down on mining in and around Kaziranga. This is good news for the rhino. “This will relieve nearly 20-25 kilometres of key corridor areas, connecting Kaziranga and the Karbi Anglong hills. Freeing such areas from biotic pressures will enable animals migrate to the Karbi hills more easily, especially during the monsoons,” Mr Sivakumar adds.

The 2019 census counted 231-237 rhinos in Jaldapara and 47-52 individuals in Gorumara national parks in northern West Bengal. The state too is addressing its challenges of habitat, rhino population management and the straying of species outside protected areas. This has been done by setting up an additional rhino habitat at Patlakhaoa forest, in the vicinity of Jaldapara National Park. According to Ravikant Sinha, state chief wildlife warden, work is on in the nine-square-km forest patch to accommodate the growing rhino population in the state. “We are particularly working on the degraded grasslands, digging up wallowing ponds/water holes, putting up anti-poaching camps, watchtowers etc. In the first phase, we hope to translocate at least six individuals gradually over the course of a year. The area was known to have a historical presence of the Rhinoceros unicornis, and is thus ecologically suited for its sustenance,” he says.

Wildlife conservationist Animesh Bose stresses that more rhino bearing areas are required in Bengal. He argues that the rhino’s depleting habitat and increasing population is not just putting stress on the species, but also on other herbivores like bison, elephant, sambar, chital etc. all of which thrive on grasslands. While developing the Patlakhaoa forest is a positive step, he suggests other potential sites as Majiali forests (under Jalpaiguri forest division), about five kilometres from Gorumara National park need to be earmarked. Bose is Programme coordinator of the Siliguri-based Himalayan Nature and Adventure Foundation, (a non-profit working with wildlife in the region). He points out that rhinos from Gorumara have already been seen grazing in the Majialio area, hence this five-square-kilometre stretch is a viable rhino habitat. 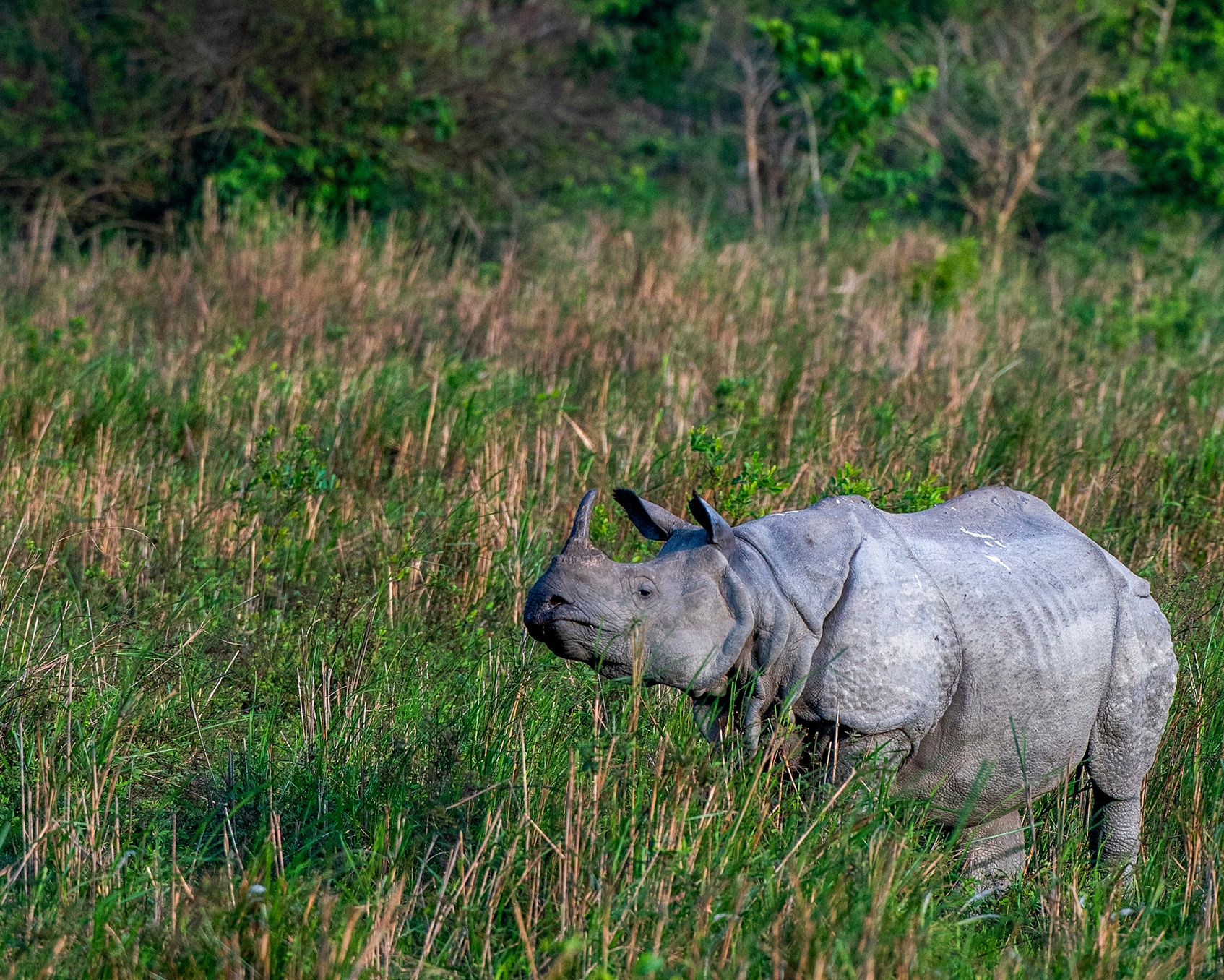 Spotting a greater one-horned rhinoceros in Kaziranga National Park is not a challenge. The park has the largest number of rhinos in the world. Despite several challenges, it is known as the pachyderm’s most secure habitat. Photo: Udayan Borthakur

A small reintroduced population of 38 rhinos also live in two rhino rehabilitation centres in the Dudhwa Tiger Reserve in Uttar Pradesh. The rhino relocation exercise at Dudhwa began in 1984 with seven seed populations introduced from the wildlife sanctuaries of Pobitora in Assam and Chitwan in Nepal. Rhinos reintroduced into Dudhwa National Park pose their own conservation issues, which differ widely from those in Assam or Bengal. “Our first challenge is to make our rhinos free ranging from their enclosures,” says Ramesh Pandey, field director Dudhwa. Unlike Kaziranga, where the animals can pass over to the hilly Karbi Anglong nearby, Dudhwa’s rhinos, if released from the enclosures, are likely to stray into the neighbouring villages in the monsoon, causing human-animal conflict. Hence, it is necessary to have an associated management capacity of population put in place first, which can perhaps be followed by with soft release of few rhinos in the first phase.

Pandey also underlines the threat of in-breeding and lack of heterogeneity in small populations and emphasises that a few rhinos from Assam and West Bengal need to be brought into Dudhwa to ensure genetic diversity.

Amit Sharma, senior coordinator of the rhino conservation, species & landscape division, WWF India points out that there is a research gap in the understanding of the behavioural traits of the rhinos in India. “We also need to analyse the possible long-term impacts of climate change on the wet grassland habitats preferred by these rhinos for their proper management,” he says. 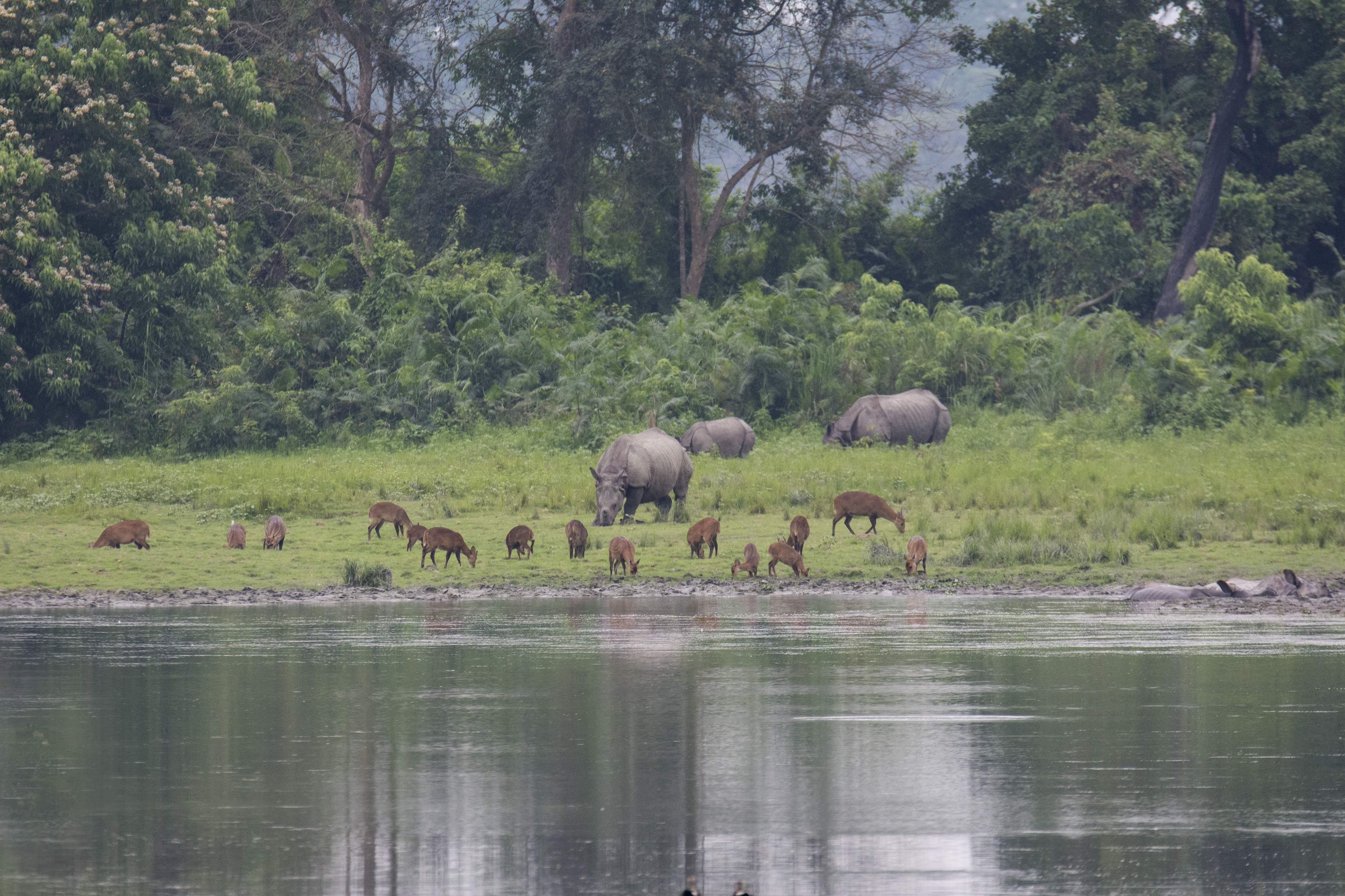 Numerous action plans like the National Rhino Conservation Strategy and the National Rhino Action Plan are in place to synchronise rhino conservation efforts and the streamline the various challenges faced by the rhino range states. These were first proposed at Rhino Vision 2020, which was a partnership of numerous national bodies and international organisations established in 2005. The principal goal of this plan was to expand the number of Indian rhinos in Assam to 3,000 individuals spread over 7 protected areas, by the year 2020. “The basic purpose of the exercise is to bring about unison in rhino conservation between the rhino bearing states in the country,” says Soumitra Dasgupta, Inspector General of forests, looking after wildlife. The long-term goals of the programme, up to 2030, include increasing the rhino population by five per cent, especially in areas that were once rhino bearing. “Such areas that are presently degraded will be developed into new habitat areas, and will be repopulated with the species from overcrowded parks,” he says. Accordingly, the counting of rhinos will be done jointly by the states, after every four years. At the core of this plan is the translocation of some rhinos to other protected areas, so that they can be spread across multiple parks with enough land to encourage population growth.

The National Rhino Conservation Strategy is an important initiative because it aims to go beyond geographical and political boundaries. It was launched in February 2019 in order to bring about close collaboration India and Nepal to protect the species, across political borders. The idea is to take action under a single protocol to strengthen protection, research and monitoring, and protection. The joint protection mechanisms are critical as cross border migrations make them vulnerable to poaching. Keeping with this idea of international collaboration to protect the rhino, five Asian rhino range countries — Bhutan, India, Indonesia, Malaysia, and Nepal met in New Delhi in February 2019 and signed The New Delhi Declaration on Asian Rhinos 2019. This is a declaration on joint protocols for protection, intelligence sharing, exploring possibilities of expanding rhino ranges between all the countries for optimal population management, to keep functional migration corridors open between two countries and keep them protected even as rhinos and other wildlife migrate freely. “After all rhinos know no political boundaries or borders and such collective efforts are significant steps to bring in more awareness on rhinos and strengthen their conservation efforts in both India and Asia,” says Sharma of WWF India.