The Sundarbans tiger is unlike its counterpart on the mainland — it drinks saline water, is an expert long-distance swimmer, and hunts with as much finesse in tidal currents as it does on land 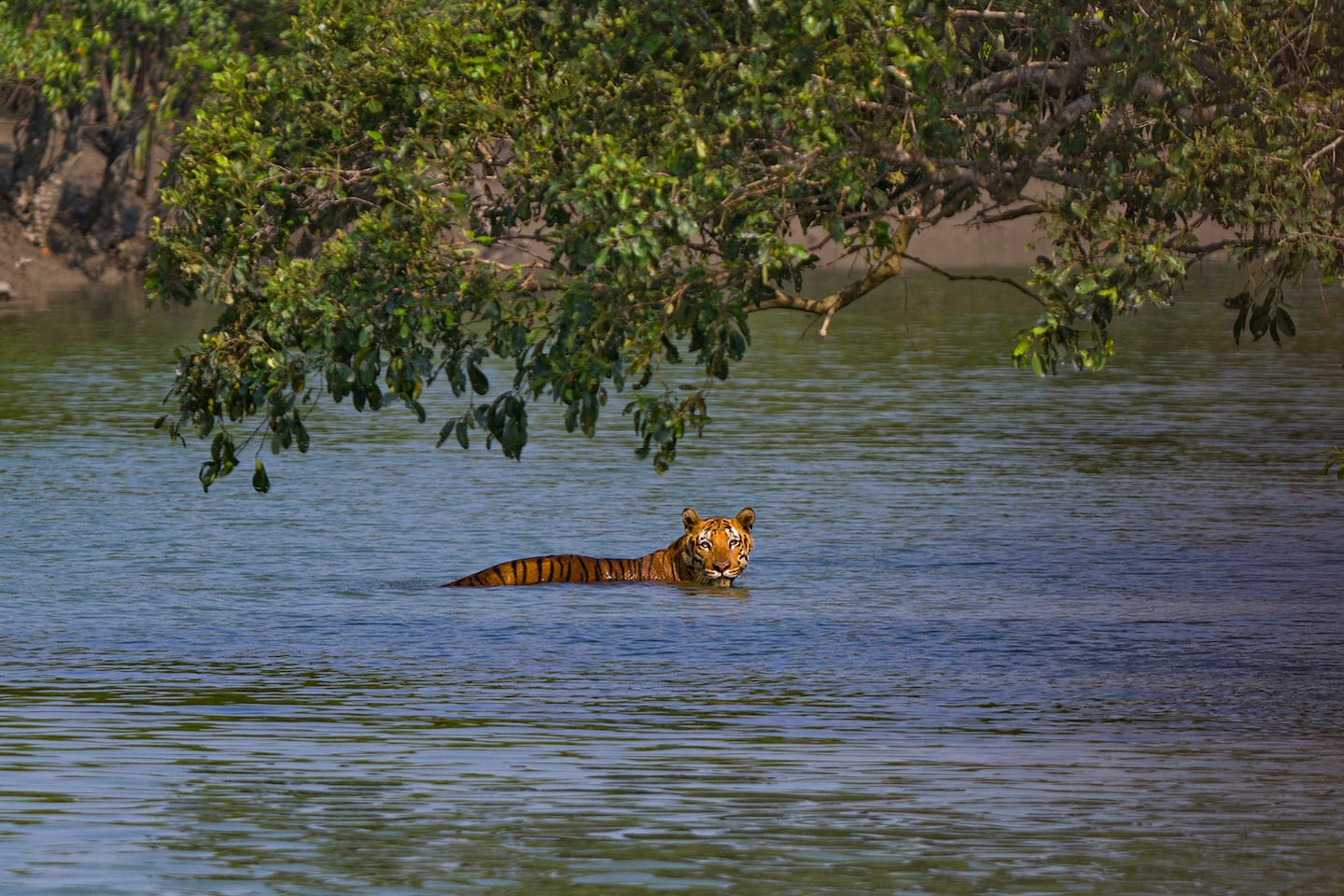 The Sundarbans is a vast and mysterious mangrove forest that extends for about 10,000 sq km along the coast of West Bengal in India, and Bangladesh. The difficult impenetrable swampy forest, interspersed with rivers, rivulets and creeks, is ruled by tides twice a day making research difficult. The Bengal tiger that had adapted to this environment is not just an apex predator, but also an enigma. In December 2007, we embarked on the first-ever collaring project in the Sajnekhali Wildlife Sanctuary, a protected area in the Sundarbans.

On December 4, 2007, a healthy tigress named Priyadarshini was lured into a cage that held a live goat as bait in the Panchamukhani forest. Over the next two days, she was tranquillised, radio-collared and released. We decided to call the project “Operation Priyadarshini” after the wild tigress. Once she was set free, we followed her on a speed boat for as long as we could — watching her until the evening. Over the next two weeks, we struggled to keep track of her movements. The signal intermittently disappeared when she travelled deep into the mangrove forests. On some days all we knew was that she had settled in a certain spot. For instance, from December 7 to 19, she was mostly resting for over 15-16 hours per day. The rule of thumb is that if a tiger remains at a particular location within a periphery of 100 m for more than 12 hours during the daytime, or more than 8 hours at night, it must have hunted a big prey. She was probably feasting away.

The mangrove forest is a challenge even for the Bengal tiger — with floods, marshy banks, shifting tides, and pneumatophores or mangrove roots that stick out of the ground like spikes. Cover photo: The Sundarbans is a mosaic of mangroves, forested islands, and rivers. Its apex predator, the Bengal tiger, is an excellent swimmer that hunts and thrives in its complex landscape.

By December 20, we knew the tigress was at Pirkhali forest opposite the river Gosaba, about 30 km from where she was released. On December, 24, at 9 pm on a full moon night, the visibility was stupendous. The tide was low. The GPS signal indicated she was moving very quickly. At about 11 pm, the forest reverberated with repeated alarm calls of “ack-ack” of the chital deer. We knew she was on a hunt, again. Suddenly we heard the sound of splashing water, the predator was chasing its prey. The tide by now had started rising and muddy waters were gushing into narrow creeks. Since the regularly flooded forest floor is muddy and covered with pointed stilt-roots (pneumatophores), that jut out at a height of 20-30 cm above soil, it is very difficult for tigers to hunt superfast prey. On an average, they are successful only once every five attempts. The tigress had missed her target.

At 11.20 pm, after some rest, she resumed chasing the prey with more vigour. Ultimately, we heard a loud shriek and cracking sound of the neck that confirmed that there must have been a capture. The tigress might have dragged her kill through the rising water to feed on it next. It was midnight, and Christmas eve was being celebrated with a gorgeous menu. We heard her soft, satisfied growls as she relished the venison. The continuous monitoring ended here.

Predator of the swamps
Morphologically, the Sundarbans tiger is the smallest among all Bengal tigers found elsewhere on the Indian mainland. Its size has probably evolved to suit the difficult mangrove habitat of the islands. A Bengal tiger on the mainland weighs about 180 kg, but males in the Sundarbans (locally called “hala” or “madna”) vary from 97 to 115 kg. A smaller size means less requirement of food, and easier movement through muddy terrain, rivers, and creeks. It is also far stockier and thick, and almost brownish-red in colour. Its glossy coat is often damaged due to salinity. Genetic studies continue to investigate whether the Sundarbans tiger is a different subspecies, but nothing concrete has been established yet.

The tiger is one of the main reason tourists flock to the mysterious landscape of the Sundarbans. Tourists travel on motorboats along long channels, and the tiger is only spotted when it decides to reveal itself along the banks of islands.

Bengal tigers on the mainland feed on a limited variety of food. But the Bengal tiger in Sundarbans feeds on a large variety of active prey species. The Sundarbans tiger’s diet consists mostly of chital, followed by wild boar, but it also feeds on smaller animals like rhesus monkeys, water monitors, crabs, fish, birds, turtles, otters, fishing cats (rare), rats, and frogs. Its food may occasionally include human beings who travel inside the forests to fish or forage, as well as domestic animals.

The Sundarbans tiger is also known to eat pythons (P. molurus). On July 17, 2009, months after the onslaught of the cyclone Aila that ravaged the Sundarbans islands, a carcass of a 12-14-year-old tigress was found at Netidhopani-1, a range in the protected area. The autopsy revealed that it had eaten two poisonous snakes because of the scarcity of food — a king cobra, monocled cobra, and half-digested crab were found in its stomach. In the summer, the tiger has also been observed breaking low-hanging honeycombs and chewing on it.

A long-distance swimmer
Unlike tigers on the mainland, the Sundarbans tigers comfortably migrate across borders, swimming from one island to another. In this process, their scent marks, usually indicating territory, are swept away by tidal waves. This means that the Sundarbans tigers have far more fluid territories, or none.

The Bengal tiger’s hindlimbs are longer than its forelimbs. It propels itself on its long hindlimbs to leap over the tiny creeks that separate islands in the Sundarbans.

The tiger is known to swim with the help of its tail, which is comparatively more muscular and consistently thicker at the base than that of the mainland tiger. The tiger uses it like a limb to swim — sweeping it from side-to-side like a crocodile. It has also developed a technique to keep the entire body submerged in water except for its nostrils. On one occasion, from a distance, I noticed only a black object floating in the water, but when I looked through the field glasses, I identified a tiger’s large head.

It is very cautious while moving from one island to another. Most importantly, the tiger is a superb long-distance swimmer. It is recorded to have crossed 5-km-wide channels and has the capacity to swim 15-20 km through tidal rivers. A tiger was observed swimming continuously for about three hours, crossing two mighty rivers, Mayadwip and Matla, bordering the Bay of Bengal on an April afternoon. Another tiger was observed swimming for about 600 m against the current in seven minutes, eighteen seconds. In narrow creeks near the forest, a tiger can easily outswim a country boat and leap aboard. 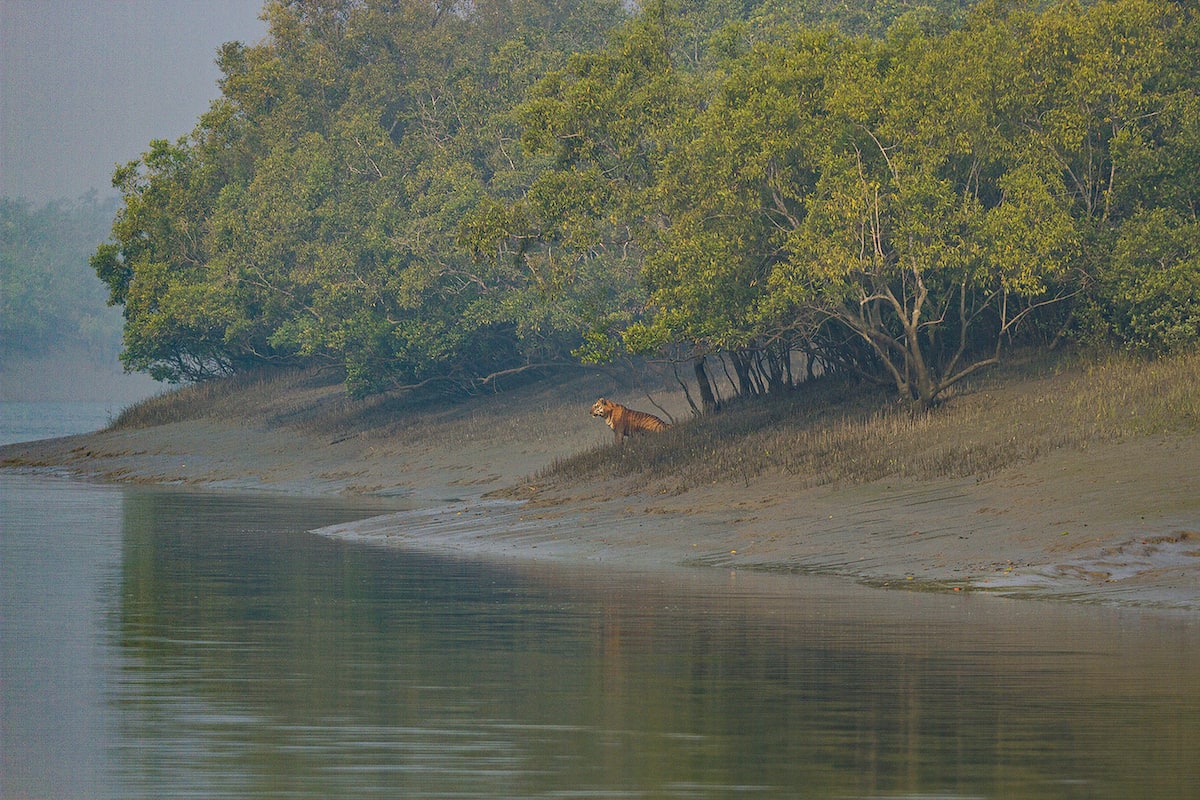 The Sundarbans has regularly protected the coasts of West Bengal from storms and cyclones, but with climate change and rising sea levels, islands are shrinking and the uniquely adapted tiger is at risk.

Tigers beyond borders
The Sundarbans tiger often migrates between India and Bangladesh. On 21 May 2010, a male tiger was trapped in the Arbeshi forest on the Indian side of the Sundarbans, tranquillised, radio-collared, and released in the Khatuajhuri forest bordering Bangladesh on 22 May. This Khatuajhuri male was blind in the right eye, perhaps a sign of territorial fights. The radio-collar signals revealed that on the first two days, it was on the hunt and travelled only 6-7 km. But on the third day, the tiger travelled more than twice that distance, crossing the River Harinbhanga and moving into a new territory in Bangladesh.

The Sundarbans tiger has been able to survive generation after generation, struggling against all odds. Its habitat has faced the onslaught of climate change. With sea levels rising, the forest has been shrinking. If their last habitat keeps sinking in the coming decades, there is little possibility of their survival in the long run. As a result of changing climate, rising sea-levels, soil erosion, increased salinity and temperature, erratic rainfall, and the loss of habitat and prey animals, tigers have been moving closer to the human inhabited islands of the Sundarbans. During the 1980s, most tiger sightings were at Haldi camp, in the southern area of the Sundarbans National Park, while during the 1990s, most sightings were recorded in the park’s transitional zone at Netidhopani. Now, sightings are mostly near Sajnekhali and Sudhanyakhali, close to the fringe areas, leading to intense human-tiger conflict. 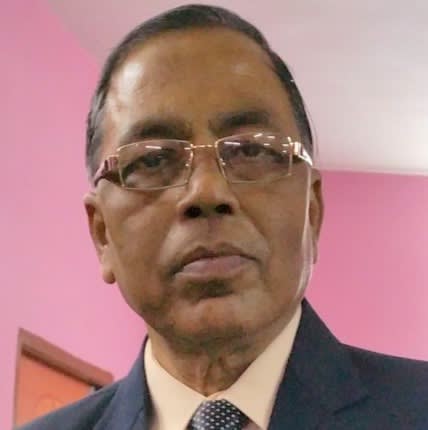 is a wildlife ecologist, author, journal reviewer, ex-official at the forest department, Government of West Bengal.