Wildlife Warriors: The Guardians of Kaziranga Brave On

Under conditions of extreme hardship, the protectors of Kaziranga battle numerous challenges to ensure the safety and security of the animals and the park

A herd of wild elephants near a small waterbody in Kaziranga National Park. It is estimated that about 1,940 elephants live in the Kaziranga-Karbi Anglong area. Photo: Nejib Ahmed

Preserving wildlife has never been easy. For those who work to protect Kaziranga National Park (KNP) in Assam, the challenges are many and daily. Poachers prowl through tall thickets. Rhinos are targeted for their horns, and tigers for their body parts, which are in great demand for use in traditional Chinese medicine. Tigers lurk behind high grasses, in wooded hills, and in the marshland, and can attack when they feel threatened. During the monsoon, the raging river Brahmaputra wreaks havoc when it floods the land. Herds of wild buffaloes and elephants can suddenly charge a village bordering the park.

According to 48-year-old Mohammad Manik Ali, however, no challenge is a deterrent to doing his job. “I have grown up watching the enigmatic landscape. I am proud to be working as a forest guard in this famed habitat of greater one-horned rhinos, since the past three decades,” he says.

A UNESCO World Heritage site, Kaziranga has emerged as the global stronghold for greater one-horned rhinos (Rhinoceros unicornis). With a population of 2,413 rhinos and 104 tigers spread over 850 square kilometres, this complex ecological system is vulnerable to poachers. The Brahmaputra flows across its northern boundary, NH37 and the Karbi-Anglong hills lie to its south, providing easy access and potential hideouts for poachers. Coming to the park’s rescue are ‘wildlife warriors’ like Manik, and at least 1,300 other forest guards, who maintain a 24/7 vigil over the reserve. Patrolling 10-12 kilometres on foot every day — across a mosaic of vast and difficult terrains comprising grasslands, woodlands, wetlands, sandbars, and hills — they try to keep poachers away, and protect our national heritage, biodiversity, and forests. They are the unsung heroes of Kaziranga.

For Manik, a typical day may begin at 5 am, or end at that hour if he is on night patrol with his team. At the time of our conversation, he was posted at the Mihirmukh beat (one of the entry points of KNP) in the park’s Kohora or Central range. Manik is used to doing a variety of different tasks. “I may be asked to do anything, patrolling, accompanying tourists, providing security to visitors, or fixing up camera traps for tiger monitoring,” he says.

During his long tenure as a forest guard, Manik has had many interesting experiences. Relating a memorable rendezvous with a big cat, he says, “I escaped by barely a foot from a pouncing tiger about two years ago.” He was in a vehicle with a tiger monitoring team, and chanced upon the predator sitting alongside one of the tourist routes. There were tourist vehicles behind them, and Manik’s team stopped for a while, allowing them to pass. “In the meantime I kept looking at the magnificent animal. Before I realised what was happening, the tiger simply leapt at our vehicle missing me narrowly,” Manik recalls.

Despite this close call, Manik has not given up working for tigers. According to Tridip Sharma, tiger biologist with WWF India’s Brahmaputra landscape programme, he has been actively working with the tiger monitoring team for the last five years. WWF works closely with the forest department in Assam on various conservation issues. As his mentor, Sharma relates with pride that Manik and his team have put up more than 250 camera traps in KNP so far.

Tiger monitoring exercises thrill 28-year-old home guard Selauddin Thakuriya too. He claims he can identify the gender of tiger by simply looking at its pugmarks. Posted at the headquarters of KNP’s Eastern Assam Wildlife Division at the Bokakhat beat, he admits that diffusing man-elephant conflict in nearby villages can be very challenging. “When herds of wild elephants randomly enter villages from the forests at night and start destroying crops, the villagers get irate and panicky. We rush there with our team and try to scare the animals away with blank firing, flashing strong lights from big torches, shouting, etc. But they are not easily intimidated and the ordeal to drive them away can last several hours,” he says. Selauddin feels a sense of satisfaction when the villagers come forward to thank them.

Building a rapport with and confidence of local communities is crucial for the forest department, says Selauddin. He believes the park cannot be protected without local support. Ten years of experience in KNP has taught him that local villagers can be the most effective sources for gathering intelligence against poachers.

Mintu Bora is one of over a hundred forest home guards who are at the forefront of protecting the wildlife of Kaziranga from poachers. Photo: Assam Forest Department (KNP)

Who can escape hawk-eyed home guard Mintu Bora, posted at Bokakhat beat? He knows the KNP like the back of his hand and is nicknamed the park’s ‘Google map’. No maze of pathways or trails of KNP is alien to him. “I am deployed in particularly susceptible sites of the park for night-long vigils either from a tongi (makeshift shed) or I patrol with my team. No poacher will dare enter the park if we are alert on our feet,” he asserts.

For forest guards like Achinta Bora from the Burapahar range, even patrolling can be challenging. “Being located in hilly terrain, our range is very vulnerable to poaching. Rainy season and winters bring insects like leeches and ticks in these wooded hills. The ticks (locally called sikora), dig into your skin to suck blood and need to get pulled out. Pain and irritation from their bites lasts for days,” he says. Forest protectors like Achinta, brave such adverse conditions, conducting night-long patrols on foot to keep the rhinos and wildlife safe from poachers.

Gautam Chakrabarti from the second battalion of the Assam Forest Protection Force, under the Biswanath Wildlife Division says he and his team have nabbed countless poachers during raids, ambushes, or via tip offs. His team includes Bedanta Dutta, Lakhyajit Saikia, and Uday Krishna Das. “Since our posting in the Biswanath Range in 2012, we have conducted several risky operations against rhino poachers, including veteran ones, together with our ranger,” he says.

On one occasion, the team shot down a poacher from Manipur in counter firing. From time to time they have recovered rifles, cash, tranquilizer darts, boats etc. He and his team have been given an award for their work. In the line of duty they have also braved the bullets of poachers, and Gautam once escaped a bid on his life.

Such hazards do not deter them, according to Ritupaban Bora, a Range Officer in Kohora. Their kinship with the forests and wildlife enables them to battle such odds, while staying away from their home and families for months. “Even during festivals, when most of you are enjoying, and with your families, our frontline staff are on their feet, patrolling the forests to thwart poaching attempts which increase on such occasions,” he says. 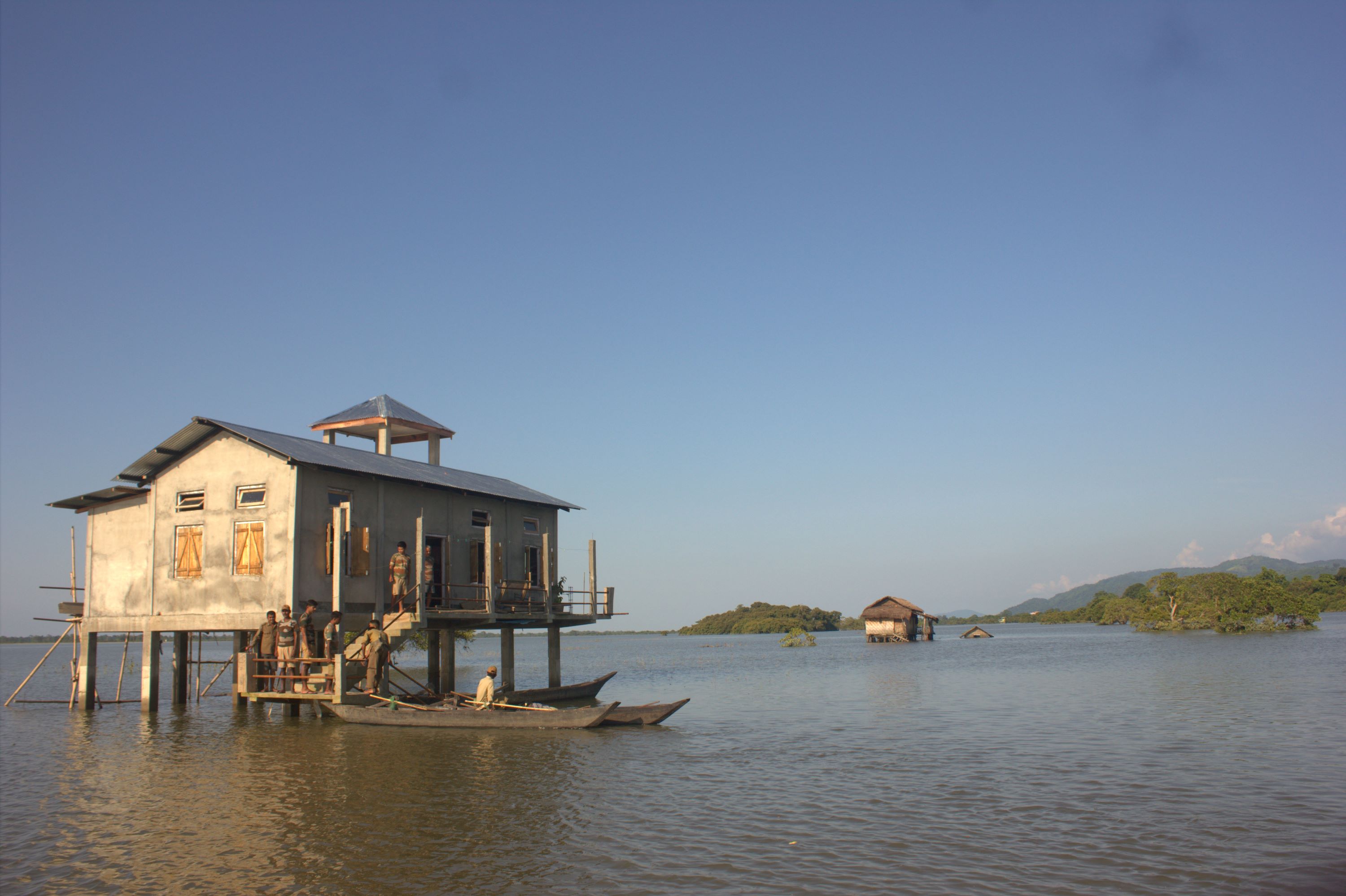 Forest guards from an anti-poaching camp get into a boat to cross the River Brahmaputra, in spate during the monsoon. Photo: Debabrata Phukon

The challenges in Kaziranga are not limited to poachers and wildlife encounters. According to fifty-year-old forest guard Jiten Lahon, during the monsoon the flooding of the turbulent River Brahmaputra is just as daunting. At the time of our meeting he was based in the Central range of KNP’s Biswanath Wildlife Division. “My beat is located next to the northern banks of the river. During floods, it rises up to a height of about 25-30 feet with rough, turbulent waters, and boat patrolling in such situation is very difficult,” he says.

The patrolling team cannot discern what lies underneath the water, especially in inundated woodlands. There may be fallen trees or other large obstacles, which can collide against the boat and damage it. Sometimes boats capsize, unable to hold up against the strong currents of the river, but thanks to Jiten’s two decades of experience in the park, they have been saved from disaster.

Forest guard Jiten Lahon has spent over twenty years patrolling the park, and is one of the most experienced wildlife protectors in Kaziranga. Photo: Assam Forest Department (KNP)

However, the most challenging days for Jiten and his team was when the flood waters were once 4-6 feet high next to their camp. “It got difficult to even bring in rations for our team mates,” he rues. Stems of water hyacinth spread across the water, completely clogging the waterways, preventing boats from crossing. Even drinking water got scarce with the tube well submerged under flood waters. He recalled incidents when with his team of three members had to survive on a bowl of pulses for two days.

Rescuing wild animals stranded in flood waters or those that have strayed into villages is what 24-year old Forester-1, Santosh Shah finds most challenging. Posted in KNP’s flood-prone Biswanath Wildlife Division, he says, “Animals get displaced from the park as major portions get flooded by the Brahmaputra. Smaller animals like the hog deer or elephant calves may get stranded in flood waters and struggle to survive against high currents. Others like rhinos may enter nearby villages.” In such situations, the rescue team has to act quickly. They sometimes need to dive into the water to save an animal. At other times they have to rush into a village and control the mob so that the animal does not attack. Then they either release the animals safely in the highlands (the park’s higher elevations are where animals huddle together during floods) or take it to the rescue centre if treatment is required.

“All such efforts and tireless services of our foot soldiers make Kaziranga what it is today,” says Rohini Ballav Saikia, Divisional Forest Officer, in the Eastern Assam Wildlife Division. The frontline staff are the backbone of the forest department and integral to its conservation success. No technological interventions can ever replace their efforts, conducted under extreme hardship. Sacrificing their personal lives, they are always up on their feet to brave the unique challenges of the landscape, he adds with pride.

Kaziranga National Park has a multi-hierarchal protection forces to ensure the smooth administration of the park and the safety of its residents. This includes forest guards, home guards, constables from two battalions of Assam forest protection force (that was constituted in 2011-12) besides foresters, rangers, divisional forest officers headed by a field director. The state forest department also has a Special Rhino Protection Force, deputed in Kaziranga, Manas, and Orang national parks to strengthen the protection of the rare species.