The Women Who Walk with Rhinos

Most national parks block access to protected forests, affecting the lives of those who depend on it for resources and livelihood. But in Manas and Orang, authorities allow local women to collect fallen twigs and branches in buffer zones, securing their livelihoods, and building empathy for the wild

In Kaziranga, where access has been cut off, women express resentment that their fortunes have so far not risen in tandem with the rhinos’.

Kasema Khatun’s tiny, thatched-roof house lies just a few feet from the swaying elephant grass thickets of Orang National Park, a 78-square-kilometre (30-square-mile) protected area in the northeastern Indian state of Assam. Like the other residents of Rangagora Village, it is not uncommon for Khatun to occasionally break the day with the sight of a greater one-horned rhino (Rhinoceros unicornis) grazing in these tall thickets of elephant grass, separated from her house by nothing more than a barbed-wire fence.

“Sometimes an adult rhino is accompanied by a calf,” Khatun said. “It’s beautiful to see them stroll past together.”

Orang National Park is home to more than one hundred greater one-horned rhinoceros and has a reputation for maintaining amicable relations with the surrounding communities — although in recent times Orang has seen a rise in conflict between humans and wild animals as farms and settlements inch closer to the forest.

But Khatun, brought up with her grandfather’s stories of Bonbibi, a guardian spirit of the forest, doesn’t fear the forest or its beasts. According to family lore, her ancestral roots lie somewhere in colonial Bengal’s mangroves. “My grandfather told me our forefathers lived by forests. They knew of no harm from the forest. I’ve also grown up by this forest and it’s part of my life.”

Khatun and other women from the fringe villages of Rangagora and Bezimari enter the park to collect fallen tree branches and leaves. While roaming in the forest for fuelwood they sometimes stumble upon rhinos and other animals. “One morning, a friend and I were collecting fuelwood in the Kathoni (woodlands) just a few metres west of the Silbori forest camp in the park. Suddenly, a full-grown rhino appeared in front of us. For a while it looked like charging at us but finally it walked past without any harm,” Khatun recalled.

In February 2016, Orang National Park was officially declared a tiger reserve, vesting more powers in the hands of the park authorities to keep the forest inviolate. And a recent order-cum-letter by the Indian government’s National Tiger Conservation Authority (NTCA) completely blocks forest-dependent communities’ access to the forest resources in the “critical tiger habitats” like Orang.

The park authorities in Orang, however, believe in a more pragmatic approach towards conservation, emphasizing cooperation and building mutual trust and understanding with the fringe communities. They haven’t obstructed the locals’ customary practice of collecting minor forest produces (MFP) from the park. Instead, they’ve tightened the vigil.
Village women like Kasema Khatun are allowed into the park but their activities have been restricted to the park’s marginal woodlands. According to park authorities, these women are not a threat to the park, with near zilch record of their involvement in any wildlife crime. On the other hand, several men from areas neighboring the park have been arrested for involvement in rhino poaching networks and other wildlife crimes.

“We do not prevent the village women from collecting fallen tree branches near the fencing. It does no harm to the forest ecosystem. We just keep watch on them so that they don’t traverse towards the core of the park,” said Lankeshwar Deka, a forest guard who has been working in Orang for ten years. “But we keep close vigil when men move in looking for fuelwood. Because they carry the risk of going beyond mere MFP collection — leading to potential wildlife offenses of any sort.”

Three women near Singiyoni, a village that borders on Pani Dihing Wildlife Sanctuary in the Sivasagar district of Assam, return home carrying bundles of firewood collected from the forest. Photo: Sudakshana Gogoi.

Manas National Park, a 500-square-kilometere protected area in western Assam housing about 32 rhinos, is also critical in shaping the lives of the women in its fringe villages. The park was entangled in ethnic strife from the late 1980s until 2001, resulting at one point in the extermination of the entire rhino stock. Today, despite numerous hurdles such as poaching and political divides, rebuilding of the park is ongoing.

Rijuti Kherkatari and her family in Shantipur, a village bordering on Manas, depend entirely on the forest for their livelihoods. Along with the other village women, she spends at least two hours a day inside the forest. “We collect firewood, vegetables and wild berries, as well as tubers for the pigs we’ve reared,” said Kherkatari.

Roaming in the forest also means coming face-to-face with the life in the wild. Encountering elephants, water buffalo, deer and wild boars is routine, said Kherkatari, in her early thirties. “I’ve been to the forest since I was fourteen. We often come close to animals, but I’ve known no harm from them.”

In 2008, rhinos were reintroduced to Manas as part of a high-profile translocation project: the Indian Rhino Vision 2020.

“I’ve seen rhino in the forest only three years ago. One day I was in my usual stroll inside the forest looking for fuelwood. In the marsh a few yards away I saw a rhino wallowing,” a beaming Kherkatari said. “It was a unique experience to see alive the animal, descriptions of which filled the pages of our school textbooks.”

During the years of civil unrest the park became a sanctum for armed rebels. And in those troubled years, men from Kherkatari’s neighborhood stopped venturing into the forest out of fear of retribution from the rebels. Only the womenfolk entered the park in groups to ensure the livelihoods of their families. It doubled the women’s workloads.

“My husband used to accompany me into the forest. We’d carry home loads of fuelwood and fodder. Then came the bad days of the 1990s. Killings and other dangerous incidents started taking place in the forest. I stopped my husband from going to the forest. The police and forest guards suspected men roaming inside the forest as rebel associates, and rebels suspected them of spying on behalf of the police,” said Kherkatari’s mother Anjali, a woman in her mid-sixties. “So, we, the women, took things into our hands, and whenever we went to forest we went in groups.”

The greenery of the forest was depleted, trees were felled and animals were hunted indiscriminately, Anjali added, recalling those bleak days. “We didn’t see rhinos or other animals anymore in the forest. What we saw were fleeting silhouettes of armed men.”

That things are now changing for the better, and that rhinos have been reintroduced into the park makes her happy, she said.

Shut out in Kaziranga

By contrast, the women living in the fringes of Assam’s Kaziranga National Park — the high-profile home to 2401 greater one-horned rhinoceros as of 2015 — have far more complex stories to tell.

“When my husband and I settled here in the 1960s, we could rush to the forest whenever we needed something — be it food, fodder or firewood,” said Kamini Doley, a septuagenarian from Dhoba-ati Belguri village, which abuts Kaziranga. “But now we live at the whims of the forest officials. We can no longer freely access the forest. My livelihood was based on the forest. What you call conservation has hindered my livelihood.”

A rise in the number of herbivores, including rhinos, might delight city-based conservationists, but not Doley. Living at the edge of the park, depredation by wandering wildlife is for her a serious issue to deal with. After all, the small amount of paddy the Doley family produces on their tiny patch of farmland barely keeps the four-member family alive.

Kaziranga is undoubtedly a conservation success story, particularly when it comes to the rhino. With its population of greater one horns hiking amid the park’s tight protection, the rhinos in the park are crammed in with just about 0.20 square kilometres for each of them. For women like Doley who live in the villages fringing the park, the sight of rhinos grazing in the greenery has become a commonplace visual experience.

Where access is permitted, forests are a major source of food for the surrounding communities. Near Singiyoni in the Sivasagar district, a woman walks home after collecting fiddlehead ferns, a popular vegetable that grows abundantly in the forests of Assam. Photo: Sudakshana Gogoi.

This success on the conservation front, however, hasn’t translated into a better life for the majority of the people in the surrounding communities. Villagers say customary access to the forest resources has been restricted while there have been few meaningful efforts to create alternative livelihoods for them.

“Rhinos generate huge incomes for the forest department, for the tourism industry: the lodge owners, hotels and restaurants in and around Kaziranga. But our lives have changed little for the better,” said Lily Karmakar of Sildubi, a village bordering on Kaziranga.

Karmakar rears pigs and raises livestock. But, she said, it’s getting tougher to find grazing grounds and fodder as park authorities enforce stringent measures to check livestock and human from entering into the forests.

Grazing rights have been a contentious issue in Kaziranga since the inception of the protected area in the colonial era. In 1900, Berthold Ribbentrop, a German forester who worked in Kaziranga, wrote in his book Forestry in British India, “the extension of our forest reserves [in Kaziranga] absorbed too large a portion of the customary grazing grounds of the country.” As a result, face-offs between grazers and forest officials were reported immediately after the creation of the Kaziranga Reserve Forest in 1905.

For marginal female livestock raisers like Karmakar in the fringes of the park, things are getting tougher.

Some women from nearby villages have found odd jobs as waitresses, housekeepers or helpers in Kaziranga’s tourism industry, or work as “casual workers” in the park. But in aggregate the number is low and the pay is marginal. And the Local Protection Squads (LPS) that have been raised in the fringe villages of Kaziranga Tiger Reserve as part of alternative livelihood schemes under the Eco-Development Program include few female members. 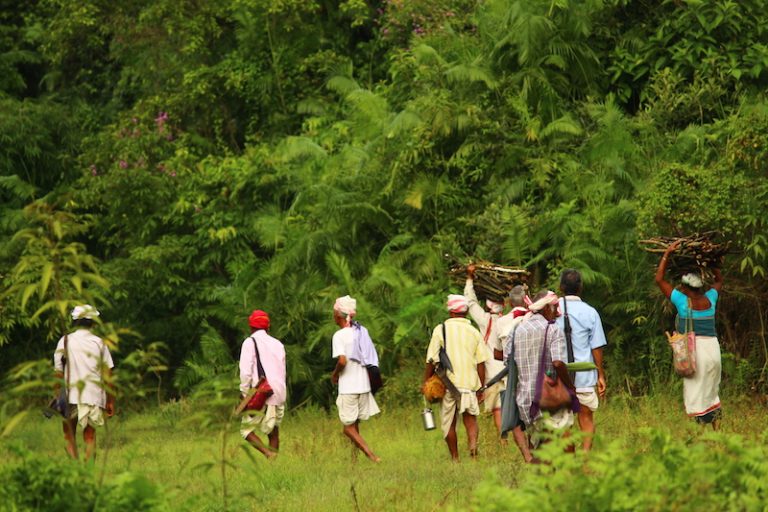 “We obviously need conservation,” said Pranab Doley, an activist with Jeepal Krishak Shramik Sangha, an unregistered non-profit in Kaziranga. “But if conservation policies stem from exclusionary attitudes towards the fringe communities, and class and gender dynamics of conservation are not taken into account, then chances are that they’ll backfire.”

In Kaziranga, economic and gender disparities are clearly visible. The benefits of a thriving tourism industry centered around rhinos have been reaped largely by entrepreneurs from outside of the area and a few local male elites. Meanwhile, the majority of the fringe villagers still languish in poverty. Women, in particular, are left with few livelihood options.

This, Doley and many others believe, has caused some villagers in the fringes of Kaziranga National Park to get involved in wildlife crimes such as assisting rhino poachers. At least on one occasion, two women from a village neighboring the park were arrested for being part of a rhino poaching network.

Kamini Doley and Lily Karmakar, nevertheless, are hopeful that one day their lives, too, will turn for the better along with those of the rhinos in Kaziranga.

The article was first published in Mongabay.