As I point my bike away from Bengaluru, the scenery changes from drab grey buildings, flyovers, and traffic, to green agricultural plains. Though I am still eight hours away, my mind is already in the damp rainforests and open meadows of Agumbe in the Western Ghats.

Beyond the historic town of Belur, the wide highways turn narrow, winding along and hugging the contours of the hills. They pass through the coffee country of Chikmagalur, and then through the rainforests of Malenadu, via areca plantations and paddy fields. I reach Agumbe by mid-afternoon having covered approximately 350 kilometres from Bengaluru in eight hours, under overcast mid-July skies, but no rain, which is very surprising for this season and region.

Agumbe seems familiar, yet strangely unfamiliar. New construction, wide roads, hotels and houses chip away at my memory of a sleepy little town from almost a decade ago. The meadows have been encroached by settlements and guava plantations — the handiwork of the forest department. Situated at a height of 650 m in Shimoga (Shivamogga) district on the crest of the central Western Ghats, Agumbe gets an average of 7,500 mm of rain annually. It is considered the second wettest place in the country after Mawsynram in Meghalaya. It is a town of picturesque houses with sloping red-tiled roofs, plantations of areca, paddy fields, open meadows interspersed with rainforest. Around Agumbe are the forests of Agumbe Reserved Forest, Kudremukh National Park, and on the western side, Someshwara Wildlife Sanctuary.

The forests around Agumbe are teeming with wildlife which come alive in the monsoon, specially with snakes and frogs. Mountain streams and waterfalls gush with fresh, gurgling rainwater. Every time there’s a break in the showers, mist rises off the damp earth.

Heavy rain-bearing clouds from the Arabian Sea open up over Agumbe, contributing to making it one of the wettest places in the country. Photo: Saurabh Sawant Located in the central Western Ghats of Karnataka, Agumbe’s hillsides are a mix of rainforests, open meadows, and grasslands. Cover Photo: Pradeep Hegde

Agumbe is also known to be the habitat for the longest venomous snake in the world. Rescue calls to remove king cobras when they enter a human settlement are common. To stay close to the action, I had booked a room at the Agumbe Rainforest Research Station (ARRS), a good two kilometres away from the main town, and surrounded by rainforests on all sides. Over the years, ARRS has earned the goodwill of local communities through snake rescue as well as research and outreach activities. 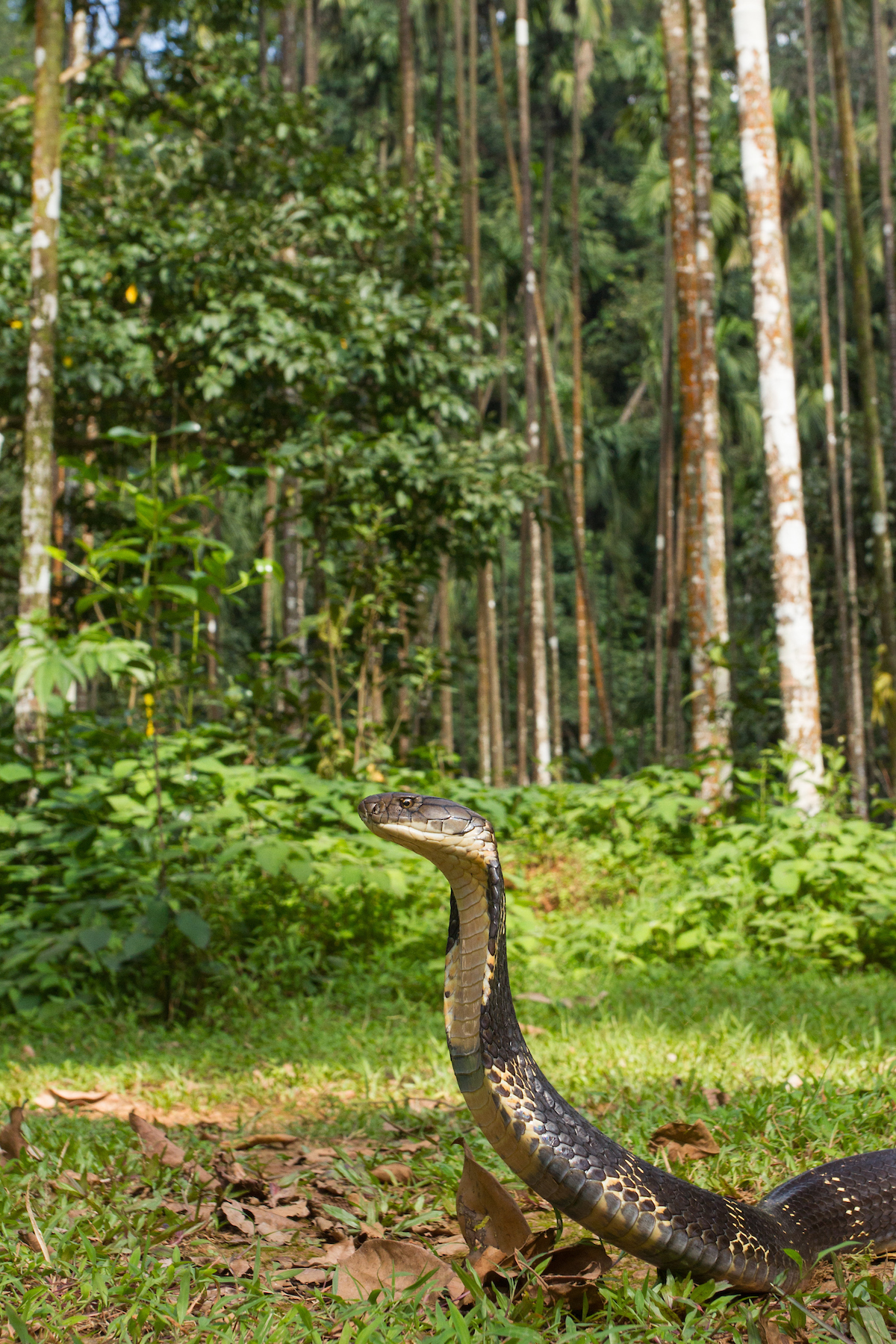 Agumbe is famous for its king cobras. When angry they can raise themselves up to six feet. Their forked tongue is capable of delivering a large volume of a potent neurotoxin that can kill a large animal within minutes. Photo: Shreeram MV

According to research done at ARRS, the forests of Agumbe nurture a wide variety of animals, including 32 species of mammals, 45 different reptiles, 31 types of amphibians, 202 bird species, and over a hundred varieties of butterflies.

Lush green tropical forests, mostly damp throughout the year with a fine network of streams, rivers and waterfalls make this a veritable paradise for herpetofauna, which basically refers to reptiles and amphibians. A closed canopy forest that is multi-tiered supports a multitude of life starting from the damp forest floor to the upper canopy. Indian giant squirrels rattle off their alarm calls during the day time while the Indian giant flying squirrels and slender lorises replace them at night. Malabar grey hornbills and racket-tailed drongos compete during the day for space that Sri Lankan frogmouths and brown fish owls occupy with their eerie calls after dark.
While the region abounds in mammalian fauna, it is not easy to spot them, though a barking deer running for cover or a sambar in the headlights is a common occurrence. Camera traps set by researchers in ARRS have revealed the presence of the melanistic leopard, small-clawed otters, wild dogs, mouse deer and other elusive fauna as well.

The landscape around Agumbe has a fine dendritic network of streams that come alive in the monsoon. Photo: Pradeep Hegde

Doddamane: Malgudi Days, the popular TV series from the 1980s, based on the works of author RK Narayan, was filmed at Doddamane in Agumbe. The 130-year-old heritage building is a homestay that welcomes visitors with sumptuous local fare. Kasturi akka is the matriarch that runs the house. Eating lunch in her kitchen while she fries some bajjis is easily one of the highlights of a trip here.

Someshwara Wildlife Sanctuary: Down the ghats from Agumbe is Someshwara and the Seethanadi Nature Camp located within it. It is one of the last remaining patches of rich lowland evergreen forest. For visitors there are trails to explore and short hikes along the Seethanadi River. During the monsoon, white water rafting is a popular activity.

Kudremukh National Park: In Chikmagalur district Kudremukh is a large park that is contiguous with Agumbe. This montane shola grassland ecosystem and tropical evergreen forests is also the source of three major rivers — the Bhadra, Tunga and Nethravati.

Kavaledurga Fort: About 25 km from Agumbe, this was the last stronghold of the Keladi kingdom — feudatories in the Vijayanagara empire. The fort is perched on a hill and commands expansive views of the dense green Malenadu landscape. As beautiful as the place is, it is unfortunately filled with discarded water bottles and plastic litter.

Waterfalls: While the region abounds in waterfalls like the Barkana, Jogi Gundi, Jomlu theertha, and Koodlu, tourists are currently not permitted to visit them in the monsoon owing to a series of mishaps. Visit post-monsoon or with a requisite permit from the forest department.

Agumbe Rainforest Research Station: The famous herpetologist Romulus Whitaker set up one of India’s finest research stations here in 2005. Here interested researchers work on king cobras and other reptiles, rainforest ecology, and workshops are run to educate visitors and volunteers. The place is run by a dedicated staff led by Ajay Giri, who also heads the king cobra rescue team. The centre also conducts India’s only long-running radio telemetry study of the king cobra that has thrown light on the habits and ecology of this cryptic reptile. Interested visitors can visit the station and interact with research and outreach staff. For those seriously interested in ecology, ARRS accepts volunteers and interns in their current projects (agumberainforest.org/arrs/pages/contact-us/).

Kalinga Centre for Rainforest Ecology: This centre runs regular educational workshops to train snake rescuers and other reptile enthusiasts, and offers ecology students an insight into the remarkable biodiversity of the area. Visitors can go on guided walks with a naturalist and interact with KCRE staff who are extremely knowledgeable about the local surroundings and biodiversity.

Waterfalls and cascades abound in Agumbe and can be seen in all their glory during the monsoon. Photo: Saurabh Sawant

Monsoon explorations: At the peak of the monsoon there is water everywhere, the calls of cicadas and frogs seem to compete with the sound of the rain. All of the waterfalls around Agumbe are now off limits to visitors during the wettest season. Visitors can, however, go to the forest department and obtain permission to enter the wilderness or visit the waterfalls.

SEASONS
The monsoon is the best time to experience this rainforest. Agumbe is pleasant in the winter and until March, after which water is scarce and it gets very hot. In the summer it is easier to walk the forest trails but expect the frogs and snakes to have hunkered down to wait for the rain. Birdwatchers will find winter a good time for a visit.

TIPS
Leeches: Any visitor to these parts must be prepared to encounter leeches while walking in the rainforest. Adequate precaution in the form of leech socks must be taken. These can be obtained locally.
Raingear: Umbrellas and a good raincoat are essential as there is almost constant rain and high humidity at the peak of the monsoon months.

GETTING THERE
By Train: Nearest railway station: Shimoga (90 km). Nearest airport: Mangalore (150 km).
By Bus: Karnataka State Road Transport Corporation (KSRTC) runs overnight buses from Bengaluru. Agumbe can also be reached by taking a bus to Shimoga. There are plenty of local buses from Shimoga and Thirthahalli to Agumbe.

Seethanadi Nature Camp: Located in Someshwara Wildlife Sanctuary, the camp organises walks and activities around the forest. Accommodation is in a dormitory or tented cottages close to the river. In Kudremukh the same group runs the Bhagawathi Nature Camp (Jungle Lodges & Resorts Ltd.; +91 080 40554055; info@junglelodges.com; www.junglelodges.com).

Agumbe Rainforest Research Station: About 1.5 km from Agumbe town, the research station has accommodations include a dormitory with bunk beds. The upside is that you’re likely find an enthusiastic bunch of conservationists, biologists, and researchers for roommates (info@madrascorcodilebank.org).