When I stepped out of my hotel in Leh, after a day and a half of high-altitude acclimatisation, I thought I was fine. But as soon as the path went slightly uphill, I could feel my lungs straining. My body was behaving in a way I didn’t recognise — or was it just the air? That was also the moment when I saw my first Ladakhi bird: a lovely black-and-white creature in a perfect green field. It was a magpie, but larger and with a longer tail than any magpies I’d seen. This one was the Eurasian magpie, locally called cha-thao, or katang-putit.

The next morning, on the road to Tso Kar, I saw what looked like crows — bigger, blacker, and if possible, even more raucous than their non-mountainous counterparts. As we drove higher and deeper into the Changthang Plateau, the silence of the steep granite cliffs on either side of the road was broken by other crow-like birds that flew around the distant mountaintops, conversing with each other in harsh ‘chee-ows’. The onomatopoeically named chough, it turned out, is a cousin of the crow, but with glossier plumage, strikingly set off by a red bill and red feet in the case of the red-billed chough, or — in the case of a yellow-billed chough I saw a few days later, a stouter yellow bill and red feet. 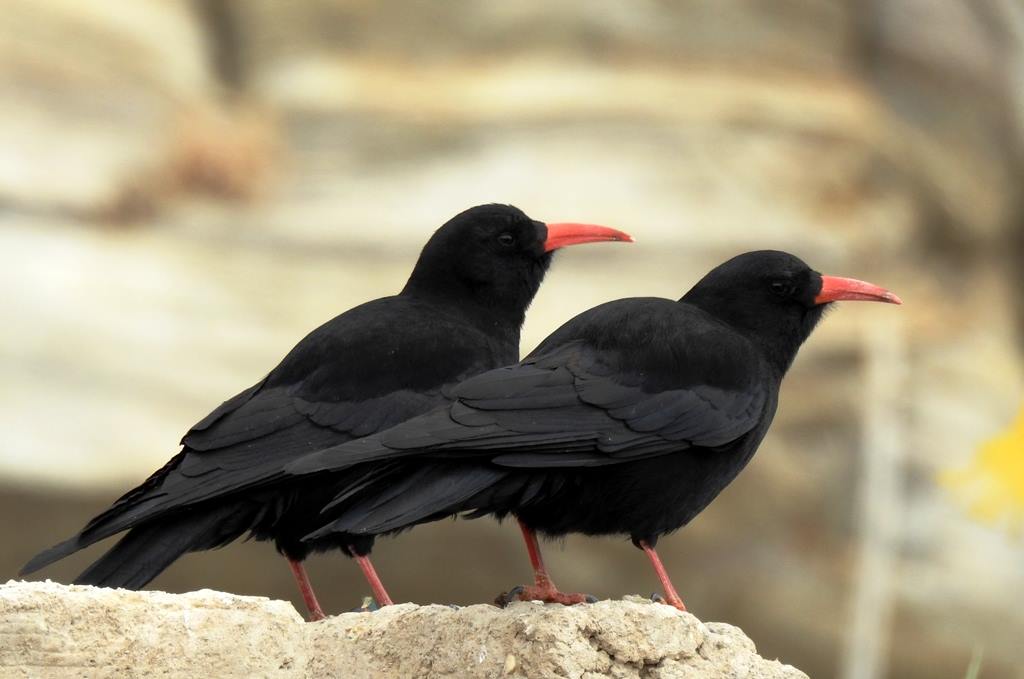 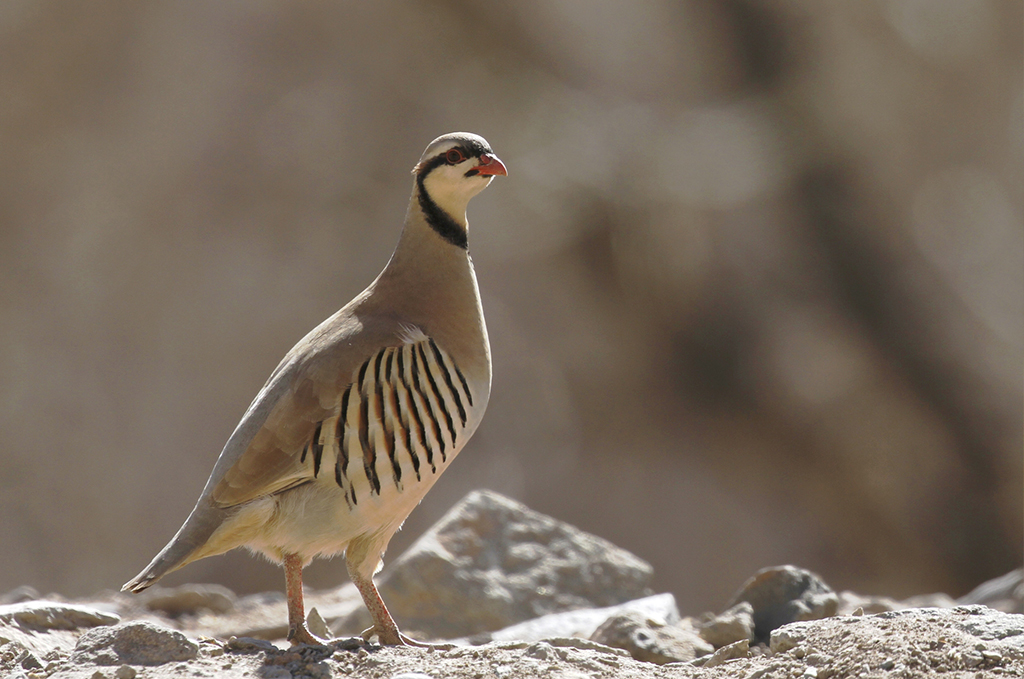 (Left) Red-billed choughs live, and are often spotted in pairs or groups in high mountainous regions with cliffs, or attached expansive grassy fields. Photo: Lobzang Visuddha (Right) The chukar partridge is found near barren hillsides with little vegetation. It is named after its call, that sounds like it's calling out its own name “chuck, chuck-aa” on loop. Photo: Jukka Palm/Shutterstock The mallard is a winter visitor to the Indian subcontinent. They sometimes breed in the high-altitude lakes of the trans-Himalayas. Photo: Dhritiman Mukherjee

Then, just after Lato, I saw a chukar partridge. I’ve seen ­partridges before, but this plump creature was far from the dull brown one of the dusty North Indian plains, now known as the grey francolin. The chukar was far more striking: it had a red beak, a black ring that ran from eye to neck, and striped pattern on its wings and body.

Between my over-stretched lungs and those first four birds, I had learnt my first Ladakhi lesson: in Ladakh,  the familiar is a little less so.

Despite this promising beginning, I did not expect to see 29 bird species in my five days. The number of my avian encounters was, however, no surprise to the bird enthusiasts of this cold desert. “Thirty or so, yeah, that’s fine,” nodded David Sonam, owner of Leh’s Snow View Hotel and a self-taught naturalist. “More than 300 species of birds have been recorded in Ladakh,” said a smiling Lobzang Visuddha, founder of the Wildlife Conservation and Birds Club of Ladakh (WCBCL), popularly known as the Birds Club of Ladakh.

Until nine years ago, though already a successful travel agent, Visuddha was ‘completely ignorant’ about the spectacular biodiversity of his native region, like ‘95 per cent of local people’. Then a tourist from Bengaluru baffled him by rejecting his finest arrangements in favour of a wildlife-conscious itinerary. “He said, I did not come here to enjoy accommodations. I have come for this bird in Nageen Lake, this bird in Dal Lake, this bird in Kargil, and that bird in Nubra,” Visuddha told me over a ginger lemon tea at the Rendezvous German Bakery near Leh’s main square. His curiosity triggered, Visuddha started going birding, taking a few like-minded friends along. “These personal tours went on for six years. No tourists,” he said. “Birding takes you to places you would have never gone. You get addicted. You start counting, (competing with other birders on) how many you have seen. Then, for better photographs.”

Today, Visuddha and the WCBCL are the hub of many conservation-based initiatives in Ladakh, from a twice-a-year bird census, to campaigning to prevent last year’s Greater Himalayan Car Rally from going off road in some sensitive areas where wildlife and birdlife would have been disturbed. “Our main purpose is to throw every piece of information into the public domain. Until you open it up to the public, how will a conservation story begin? To conserve, you need to love. To love, you need to know,” said Vissuddha, who is keen to expand the ambit of those who know. “Birding in Ladakh has been happening for a long time, but on a very small scale.” In 2018, the club organised an intensive 15-day birding course, enrolling a hundred local young people as potential naturalist guides.

One of those who attended the course, Sonam Angmo, was my guide to Tso Kar and Hanle. With a Masters in Agricultural Sciences from Dharwar in 2017, Angmo is currently experimenting with farming mushrooms in her native village of Likir. The trip with me was her first as a guide, and although she had never been to Tso Kar or Hanle before, it was clear that most birds were familiar to her from the parts of Ladakh she knew. 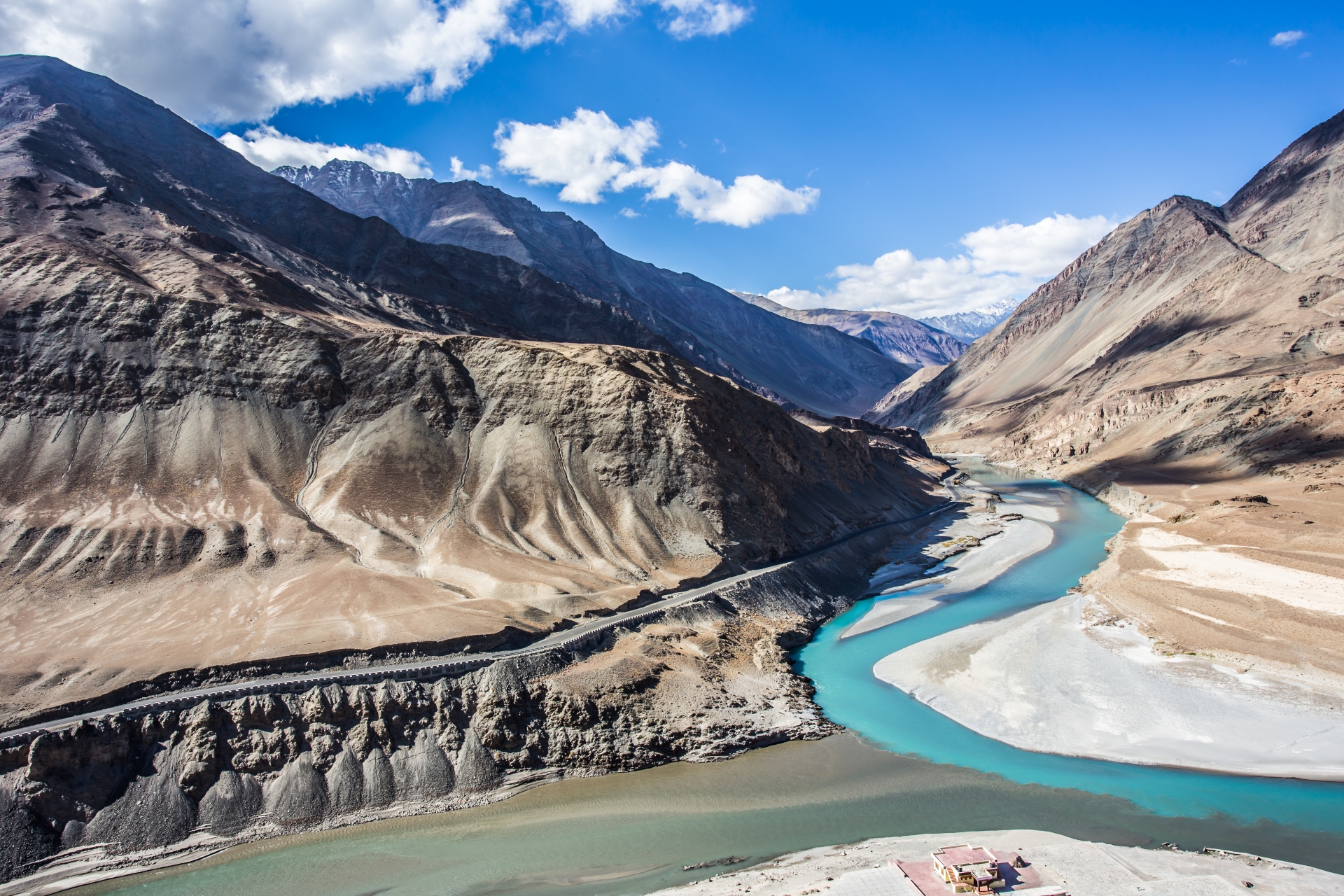 The Trans-Himalayan region of Ladakh is bounded by the Himalayas to the south and west, and the Karakoram Range in the north. The majestic Indus River cuts through it from north to south, flowing much of the way through a gorge between the Zanskar and the Ladakh ranges. With brief summers, long freezing winters, and rarely more than 100 mm of rainfall a year, Ladakh is a high-altitude desert. I travelled through the eastern and northeastern parts, bordering Tibet, which are dominated by the cold, windswept plains of the Changthang Plateau; vast grasslands with very little grass to be seen, even in the warmth of June. But dotting these often stony expanses are occasional marshy wetlands and lakes watered by glacial melt, which are a magnet for migratory birds.

The Swiss ornithologist Otto Pfister, who has been studying Ladakh’s avian life since the 1970s, divides the region’s birds into four categories. Resident species are adapted to breeding at very high altitudes, but might descend into the Ladakhi plains in winter. Migrant species, that either fly directly over the Himalayas, or in a few cases, through the Indus Valley, are of three kinds. Summer migrants who arrive in Ladakh to breed during April and May, mostly departing by end-August. Winter migrants, who mainly breed in the northern Palearctic, and arrive between October and early December to spend the winter in Ladakh. And finally, passage migrants, that pass through Ladakh either in spring (March-May) or autumn (August-November). “Sudden changes in weather conditions can produce spectacular falls of migrants,” writes Pfister in the June 2004 edition of the journal Birding Asia, “especially at key stopover sites such as Hanle, Chumur, Tso Kar and the Shey-Tikse region.”

Tso Moriri in the Changthang plateau serves as the breeding ground for a wide variety of migratory birds. It is one of the wetlands in the region that is threatened by unregulated tourism. Photo: Dhritiman Mukherjee

Even without any unexpected weather changes, Tso Kar and Hanle are a birder’s bounty. As we drive very slightly off the main road, into the greyish sandy soil that adjoins the boggy marshes of Tso Kar and Stsartsapuk Tso (‘tso’ means ‘lake’), large groups of ruddy shelducks (also known as Brahminy ducks) come into view. You can watch them for hours. Some swim placidly for 20 minutes at a stretch, while others sit tight on the water’s edge, and a group dip in and out of the water. Their distinctive orange backs are visible even from afar, as they somersault forwards in search of what I imagine will be their lunch.

The bar-headed goose is not in evidence, but a pair of black-necked cranes are hunting for worms in their leisurely, mincing manner. On our drive back to our little highway hotel, I look at a seeming anthill when a Hume’s groundpecker suddenly emerges from a tiny hole in it and suns itself for a long while before disappearing back in again. 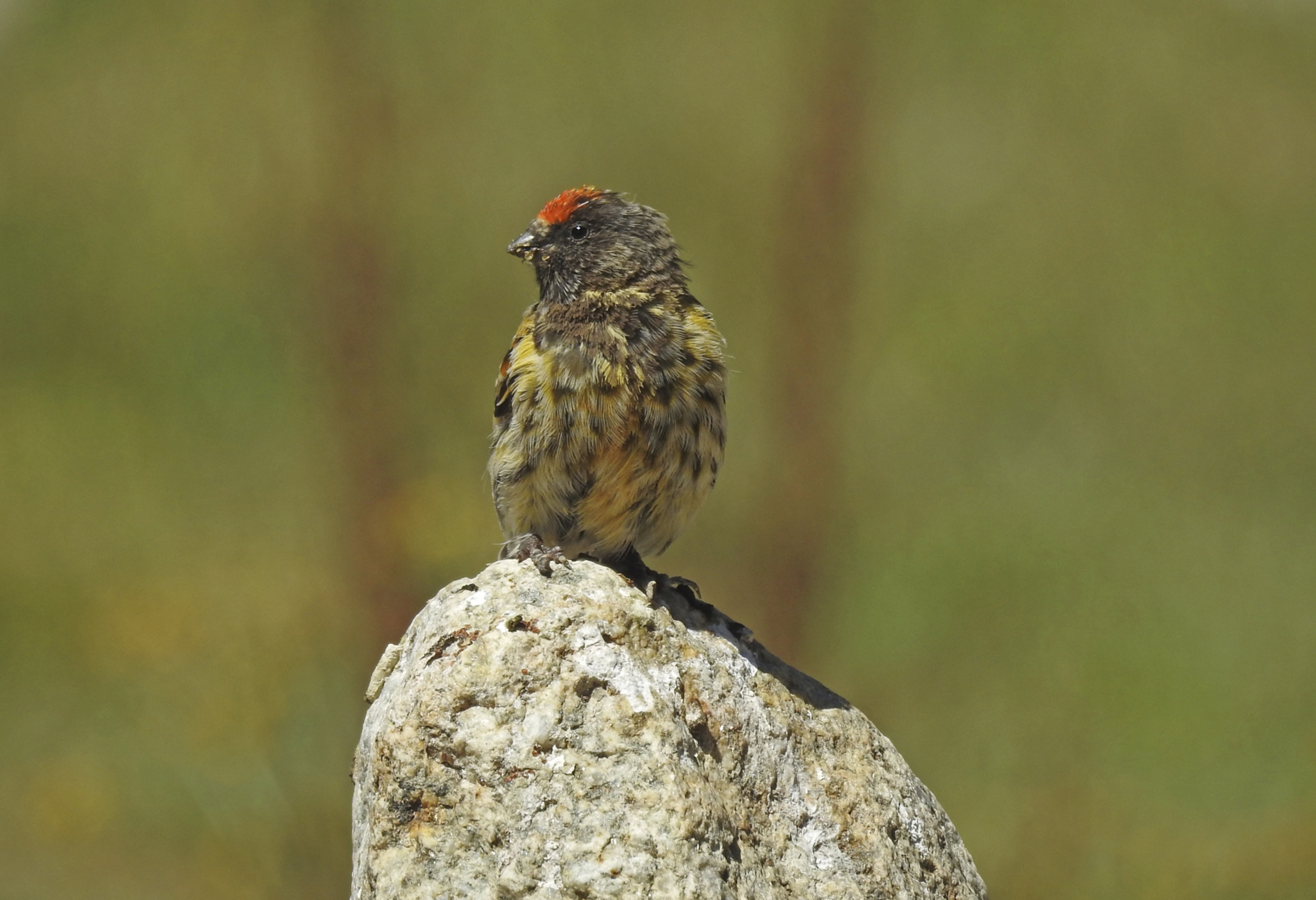 The fire-fronted serin gets its name from the striking bright orange patch on the forehead, and is mostly breeds and lives in high mountainous regions. Photo: Lobzang Visuddha

And well it might have, for that night in Tso Kar is a cold, cold one. Our hotel’s nine other rooms are empty, but Tso Kar turns out to have three other birders in residence. One of them is Ravi from Calicut, who has spent a year-long sabbatical walking across India’s biodiversity hotspots. It is his second visit to Ladakh, and he is clearly an expert.

Next morning, Sonam has already pointed me to several smaller species — the Tibetan lark, the horned lark, the common sandpiper — before our Calicut birdman spies a Saker falcon. Up on a rocky sepia crag, so brilliantly camouflaged that it could barely be seen with the naked eye, we look through the scope to see the bird’s black-tipped brown feathers quivering in the cold. For minutes, it clings to the cliff against a violent wind. Then, finally, it flies.

We, too, need to leave Tso Kar for Hanle. In the Puga Valley, near the hot springs, we encounter a whole series of desert wheatears and a little owl, which took up a photogenic position on an electric pole and screech incessantly for us. Before Mahe Bridge, a lovely forest of ombu flowers edge a little stream — and the birds have noticed. In a four-kilometre stretch, we see a host of black redstarts — the males with their deep crimson bellies vying for attention from the plain brown females — followed by a common tern, a pair of golden orioles, a brown accentor, and my favourite, the fire-fronted serin, a tiny yellow-and-black bird with a forehead that seems dabbed with vermilion.

The black-necked crane is the only crane species that lives in high altitudes. The high-altitude wetlands around lakes such as Tso Kar are its perfect breeding habitat. Photo: Saurabh Sawant

In Hanle, other than tens of swooping finches and swallows and one hovering kestrel, we see two pairs of black-necked cranes and most spectacularly the next morning, a nest with three juvenile upland buzzards, whom we watch fluffing their feathers and preening for nearly an hour, as they wait impatiently for their mother to bring them back a nice juicy rodent breakfast.

What do you call the buzzard in Ladakhi, I ask our local guide, Paljor. He doesn’t know. Later, Sonam tells me the colloquial Ladakhi word for birds is ‘cha-chiu’, though Visuddha prefers the more formal ‘dab chak’. There are some other local terms, too: ‘ichu’ for small birds, ‘chipa’ for medium-sized birds, ‘lak’ for predators, and ‘nang-pa’ for water birds, a category that would include the ruddy shelduck as well as the visiting and endangered black-necked crane. Beyond these broad categories, though, “75 per cent of Ladakhi birds don’t have Ladakhi names!” says an appalled Visuddha. “That shows how far we have to go. Right now, nothing is happening except some good photographs.” 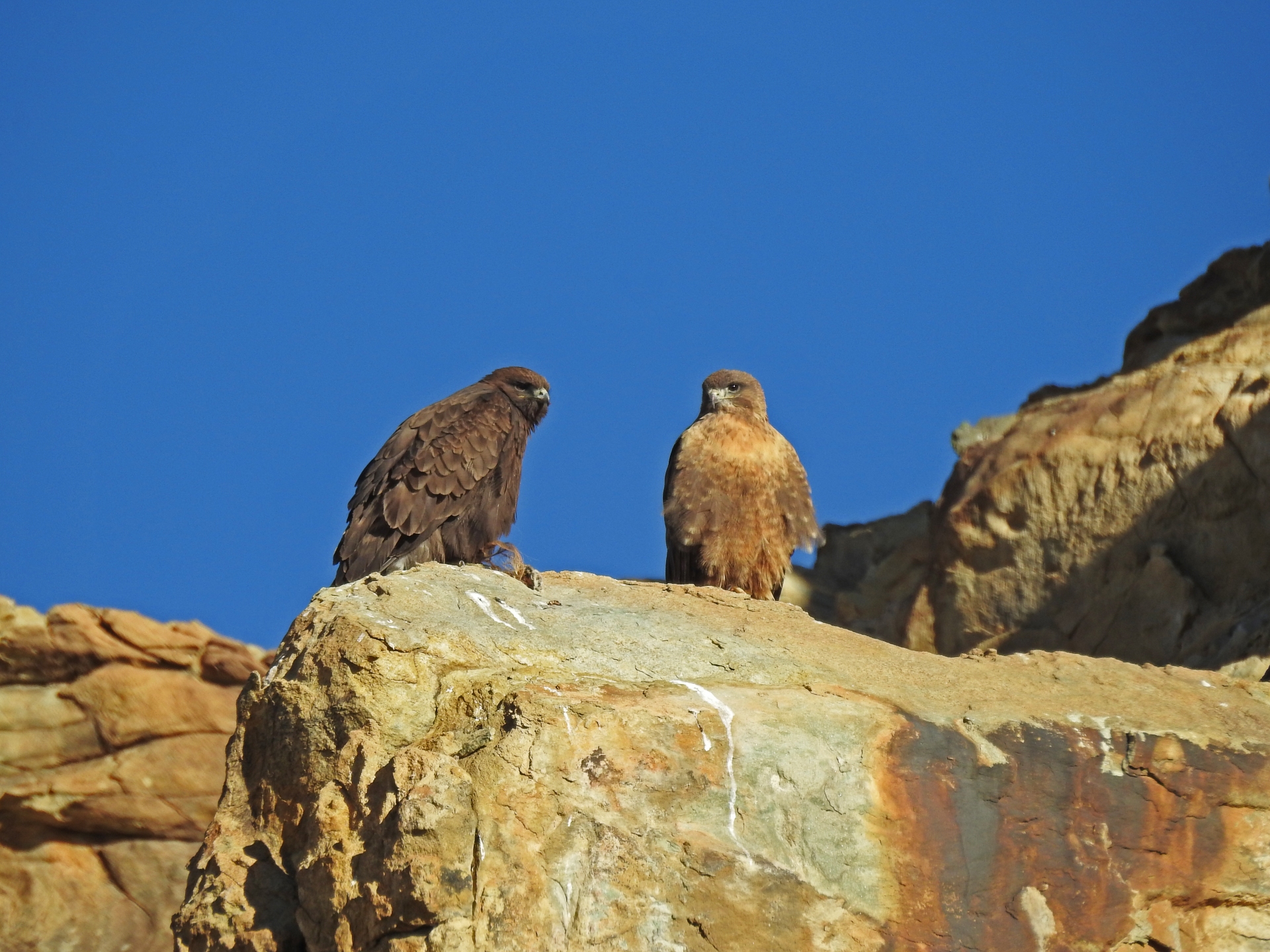 Found in the Upper Indus Basin, Hanle, Chushul and Chumur, the upland buzzard feeds on small mammals such as rodents, lizards, and insects. It spots its prey from a high perch, or while hovering in air. Photo: Lobzang Visuddha

is a Delhi-based culture critic and columnist with an abiding love of the wild. She tweets at @chhotahazri