Exploring these intriguing freshwater swamps reveals many reasons why we need to preserve them. They host not just a primitive family of plants, but also a fascinating array of creatures

Tall trees with enormous buttresses, a large expanse of exposed roots, and a closed canopy lay before me in the Myristica swamp at Kathalekan in north Karnataka. Adding to the serenity was the melodious sound of a forest stream, accompanied by the chorus of brown-headed barbets. The atmosphere was electric with the rapid fluttering of dragonflies and damselflies, and the slow, magical flight of numerous tree nymph butterflies. For me, being in such a pristine place was mesmerising. My dear friend Suhas Hegde, who has been instrumental in documenting and conserving these swamps, broke my deep meditation saying, “Varad, this swamp is going to vanish soon…it is a disturbed swamp next to a state highway!” While it is true that we are losing all our natural habitats rapidly, losing this mystical place somehow felt even more disheartening.

We spent about an hour in the swamp that summer afternoon in April 2019, and to my pleasant surprise the swamp was teeming with activity; we saw many interesting insects, spiders, amphibians, and lizards. Although this was a short visit, the Myristica swamp made an enduring impression on me, and a corner of my brain became preoccupied with many questions.

(Top) These pneumatophores or breathing roots aid plants in the exchange of gases in constant waterlogged conditions. (Above) Freshwater streams govern life in these tropical Myristica swamps.

One key question was: What really is a Myristica swamp? Quite simply, these swamps are pristine habitats with unique features and great biodiversity. They are located along perennial forest streams in flat-bottomed or gently sloping valleys inside evergreen or semi-evergreen forests. Myristica swamps are known to exist in the Western Ghats of Kerala, Karnataka, and Goa, with one swamp recorded in Maharashtra. A distinctive floral composition and associated features demarcate these swamps from nearby forests. The swamp trees are tall, their trunks displaying a typical myristicaceous or pagoda branching: clusters of regularly spaced whorls of horizontal branches radiate from the main trunk, with each whorl separated from the next by a large gap without any branches.

Another striking feature of these swamps is the presence of an intricate network of unusual root systems; they also make the swamps difficult places to traverse. The ground is covered with inverted U-shaped breathing or knee roots (pneumatophores), an adaptation to survive in waterlogged conditions. These large trees are supported in this soft, unstable soil by aerial roots which emerge from the main trunk and loop back into the soil. This feature is seen mostly in trees belonging to a primitive family of plants, Myristicaceae. The dominant plants in these swamps are Gymnacranthera canarica and Myristica fatua, both threatened species, and the spiny plants of genera Pandanus and Calamus and a few others, dominate the undergrowth. 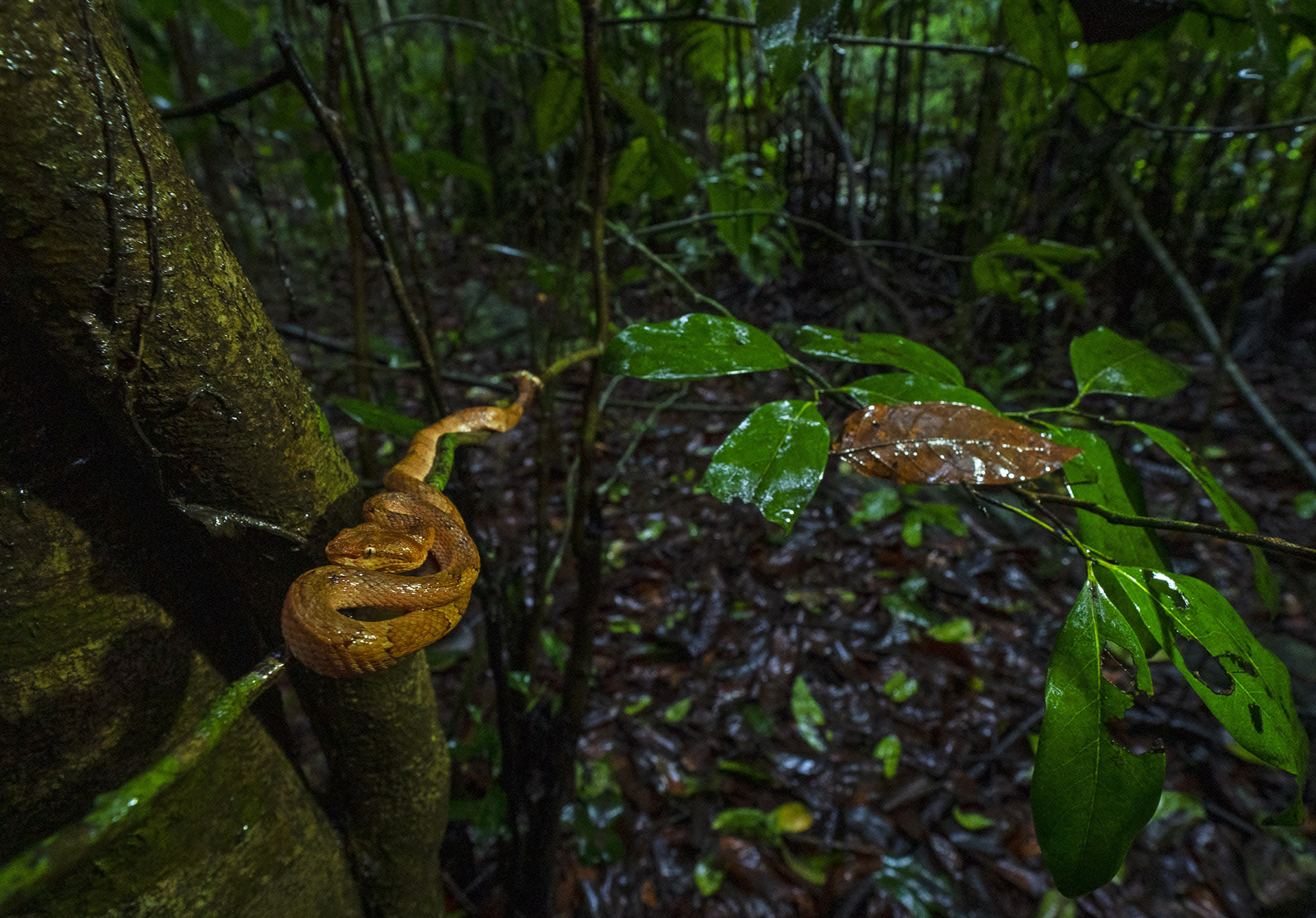 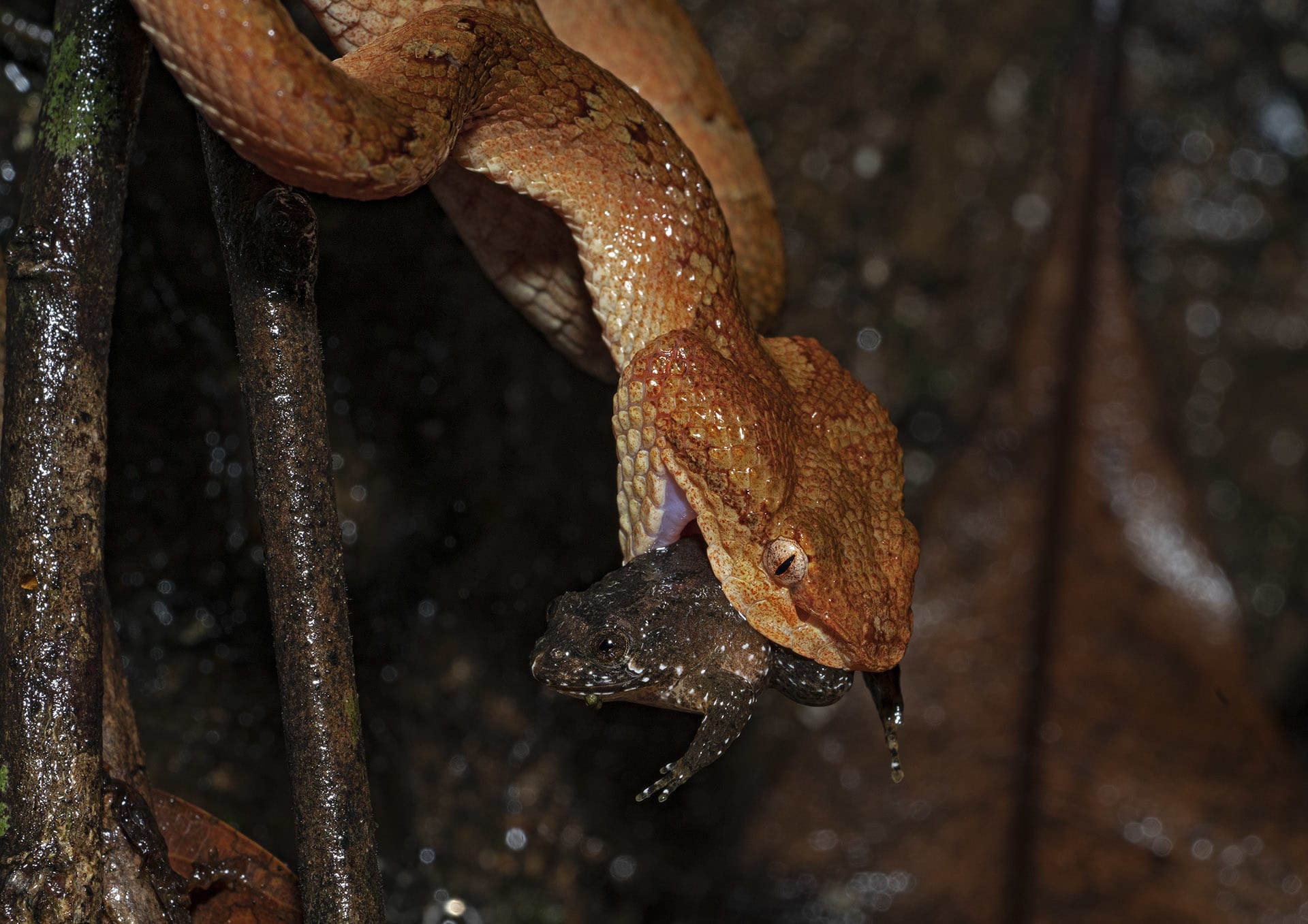 (Top) Malabar pit viper (Trimeresurus malabaricus) is a nocturnal species of snake that usually rests during the day. It occurs in a variety of colours: the orange ones being considerably rare. (Above) Not much is known about the diet of a Malabar pit viper, but we spotted it feeding on a night frog in the Kathalekan swamp in north Karnataka. 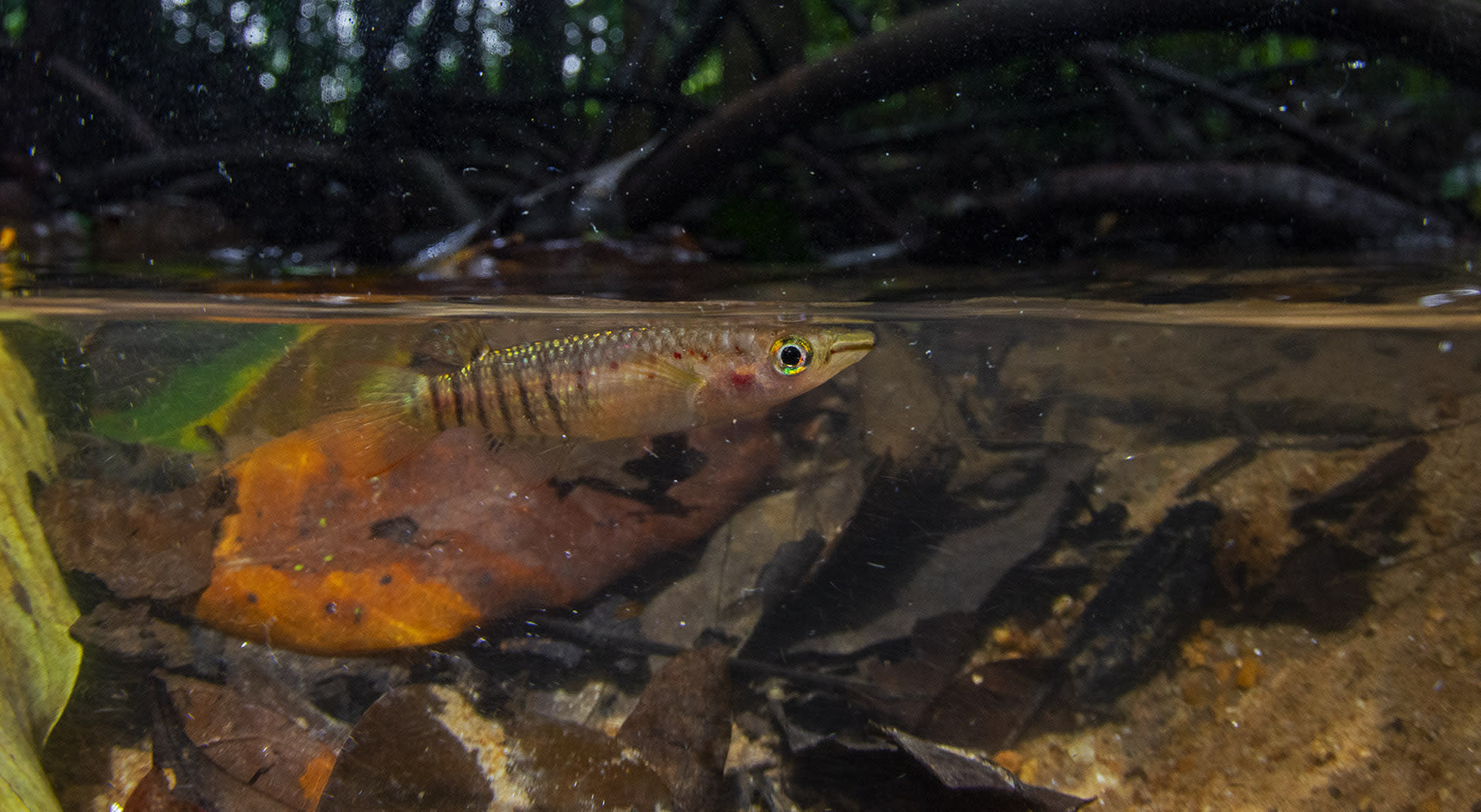 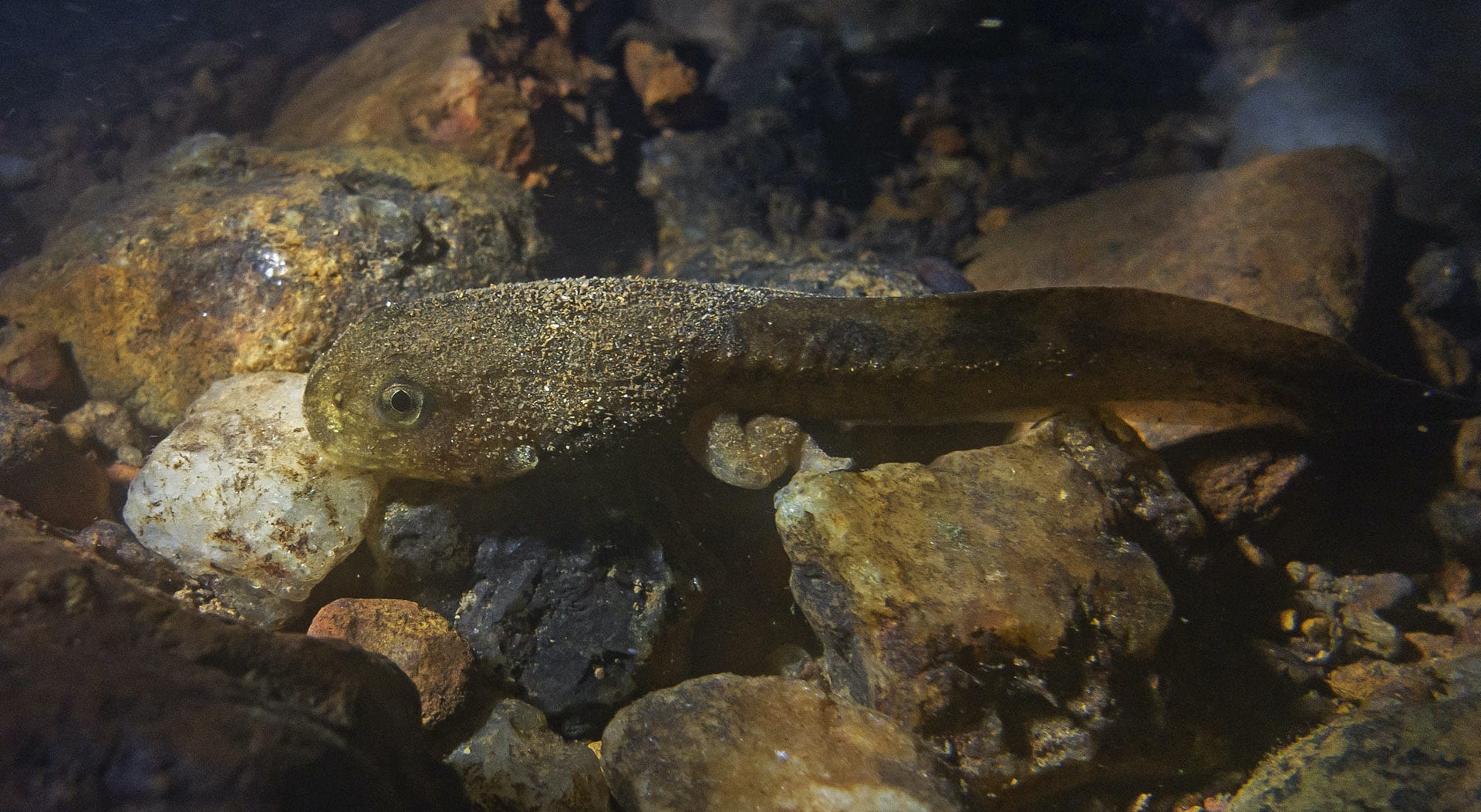 (Left) Streams in Myristica swamps host a rich and endemic diversity of fishes such as this striped killifish (Aplocheilus lineatus). (Right) The Myristica swamp is a prolific breeding ground for many species who depend on water, as the presence of these night frog tadpoles (Nyctibatrachus sp.) demonstrates.

I went back to Kathalekan in July 2019, with photographer Dhritiman Mukherjee, to explore the swamp’s diversity of amphibians and reptiles. We were accompanied by Suhas Hegde, Omkar Pai, and Swapnil Pawar, all keen-eyed naturalists. While entering the swamp in the afternoon we saw road kill — a juvenile monitor lizard — on the motorway adjacent to the swamp.

Monsoon had brought much change to the swamp from my summer visit. We were welcomed by an army of leeches and a few frogs hopped around as we disturbed the leaf litter on the forest floor while walking. A short walk and intensive search resulted in our first interesting find — sitting on the branch of a tree was an orange-coloured Malabar pit viper (Trimeresurus malabaricus). This species, with many colour morphs, is endemic to the Western Ghats. We were careful to take photographs without disturbing the snake.

Later, we ventured into the adjacent forest. The gradual increase in frog calls was a sign of approaching night, which was our cue to return to the swamp and see a different world of activity. Species like Indian leaping frog (Indirana sp.) dominated the forest floor. At least three species of bush frogs were calling from the bushes and other interesting calls were heard from the stream. Swapnil wanted to check the Malabar pit viper again, but it was not where we had seen it earlier, but there was a surprise waiting for us. The pit viper was close to the ground, feeding on a night frog (Nyctibatrachus sp.). This was indeed a rare sight! Had we disturbed this snake earlier in the day while photographing it, we’d have missed this rare natural history episode.

(Top) This night frog (Nyctibatrachus sp.) was hiding in the water during the day. Its semipermeable skin aids breathing underwater. (Above) The perennial availability of water in a Mryristica swamp makes this a haven for many freshwater crabs.

We had hoped to see an interesting species of amphibian, the Kumbara night frog (Nyctibatrachus kumbara) as it was described in 2014, by Dr KV Gururaja and his team. The frogs of this genus are endemic to the Western Ghats, and mostly associated with forest streams. We did not see their unique breeding behaviour, but we heard and spotted many males. In fact there were at least three different species of night frogs in the swamp, their calls and overall appearances distinct. Interestingly, all of them were breeding in the same swamp.

In the daytime, when we saw a few male night frogs and neared them, they would dive into the stream and stay underwater for a long time. The slow-flowing streams also support a rich diversity of aquatic beetles, crabs, shrimps, and fishes. The insects and arachnids on the floor and trees of the swamp were equally rich in diversity. To add to our amazement, there was a caecilian (Ichthyophis sp.) slowly crawling on the forest floor. Caecilians are burrowing amphibians and are the least-known of vertebrates. Every bit of this swamp, underground, the surface, water, and trees, was brimming with activity.

My third visit to this swamp in November 2019 was equally fruitful. Although we were there for just a short while we were able to see many torrent or dancing frogs (Micrixalus sp.) breeding in the stream. We also observed many individuals of an endemic frog of the genus Indosylvirana. Unfortunately, we also counted at least five different caecilian road kill specimens, as well as many frogs, and a few unidentified snakes on a road adjacent to the swamp. 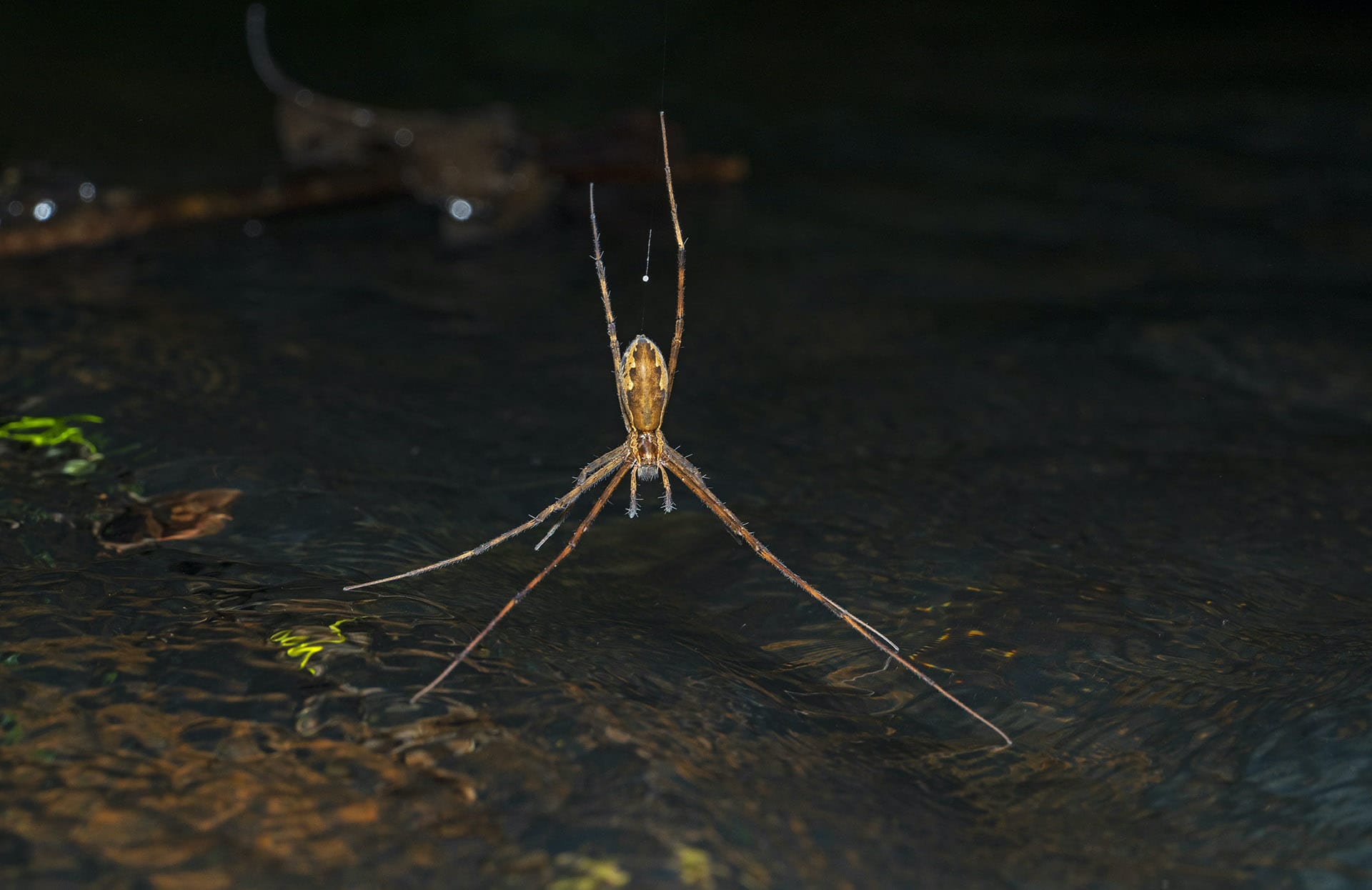 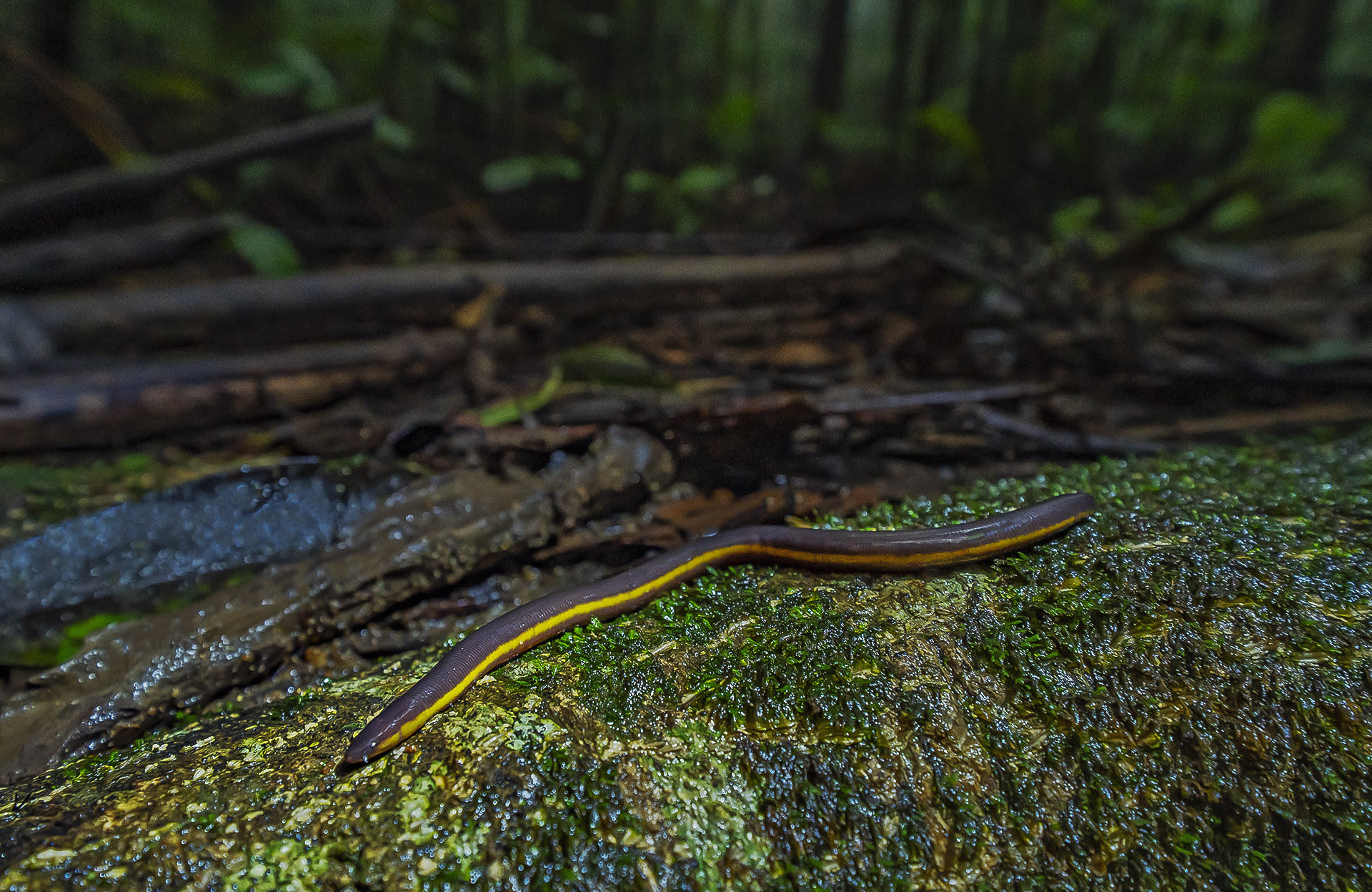 (Top) Many species, including damselflies, are strongly associated with marshy habitats. This one, Caconeura sp., is commonly seen along running streams. (Above right) Caecilians are burrowing amphibians that are rarely seen, but we were lucky to see this live one. Unfortunately we also saw five road kill specimens of Ichthyophis sp. (Above left) The fishing spider waits for prey near the bank of a stream.

On our drive back, Suhas explained the grim reality of this landscape. Most of these swamps are under tremendous pressure from human activity. The unique feature of these habitats is that they are perennial sources of water, which is the main reason for this exploitation. Many swamps are being converted into areca nut plantations, and their water diverted to for agricultural use; in the long run this is detrimental to the biodiversity of these swamps. Fortunately, a few swamps which are inside forests and part of the “Protected Area” networks or conservation reserves are still standing.

Swamps help maintain the water table in the landscape, and ensure a constant supply of water throughout the year. They support ancient, rich, and endemic floral and faunal diversity and thus are living laboratories that provide information about the distant past. Many animals use swamps as feeding and roosting grounds.

Unfortunately these unique habitats are disappearing at an alarming rate. We are not only losing these ancient, alluring habitats, but unknowingly erasing the biological history that shaped the past, and governs the present and future of humanity. 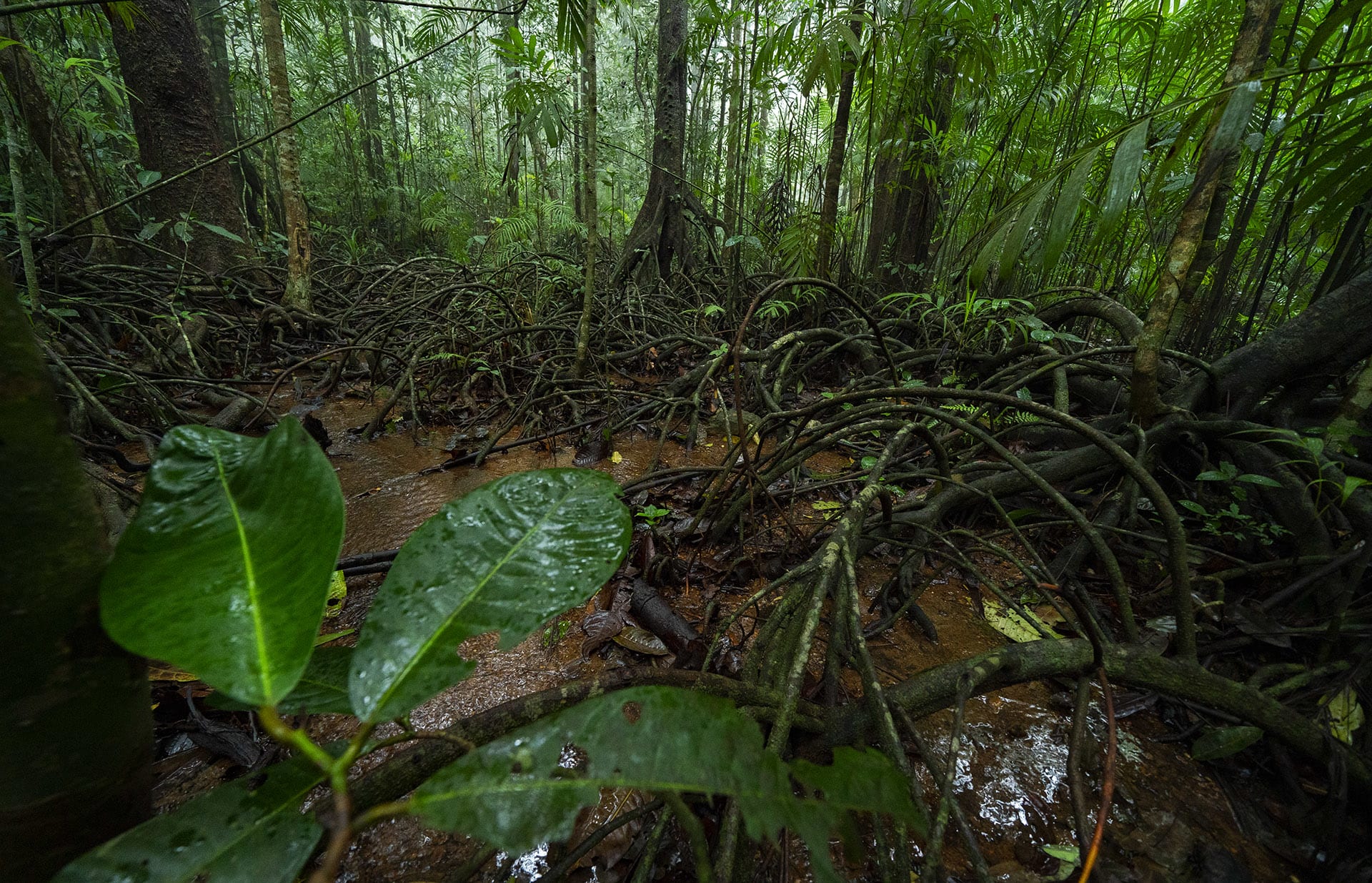 An intricate network of aerial stilt roots emerges from the main trunk and loops back into the soil to provide support to these huge trees in the soft, waterlogged ground.

The unique Myristica swamp habitat was first written about in 1960 by Krishna Moorthy K who studied it in Travancore, Kerala. In 1968, Harry G Champion and SK Seth classified the habitat as tropical freshwater swamp forests. Based on their uniqueness and continuing threats, Allan Rodgers and HS Panwar (1992) considered these swamps as critically endangered habitats. MD Subash Chandran and colleagues reported more Myristica swamps from the Uttara Kannada district in Karnataka in 1999. LN Santhakumaran and his team reported a few swamps from Goa in 1995. Recently, Gayathri Sreedharan and Malhar Indulkar reported one swamp in Maharashtra, which is the northernmost locality for Myristica swamps. The flora of these swamps is considerably well studied and there are reports of a few endemic and threatened plants. Information of the swamps’ faunal diversity is limited to a few preliminary studies of a few swamps in Kerala. Under the aegis of our outreach programme, Nidus, we have started a first of its kind, citizen science project on documentation of biodiversity in the Myristica swamps in Goa, a project funded by the Environmental Education Centre, Voluntary Health Association of Goa. 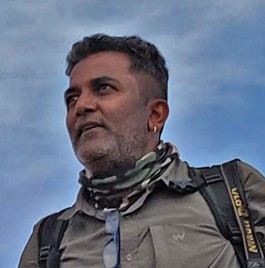