There is a certain inexplicable serene magic that draws me to grasslands. Their openness, their vulnerability, their vastness, and the sheer biodiversity you see makes them special. One of my favourite grasslands is Tal Chhapar in the Churu district of Rajasthan. It may be just a small 9 sq. km patch, excluding the additional part that is largely covered with trees, but it has all the elements that the vast grasslands from the former days used to have. The one unfortunate thing is that it lacks the cheetah, which became extinct in 1952. The last cheetah in the country was seen crossing the road in the dead of the night near Mysore in Karnataka. But the reason I was reminded of the cheetah is because the Tal Chhapar national park would have been such a wonderful home to the elusive cat as it has everything the cheetah would like to feast on in abundance — blackbuck, chinkara, nilgais and rufous-necked hares.

My first visit to Tal Chhapar was in 1985, when it was overrun by cows and stray dogs. It was a wildlife sanctuary, but badly managed. The Tal Chhapar grassland had seen better days when it was a shooting reserve of the Maharaja of Bikaner. No one except the Maharaja and his guests were allowed to shoot blackbuck, demoiselle cranes and bar-headed geese. The last crane was shot in 1962.

Old records show that Tal Chhapar was a very well-managed grassland — even green fodder and water were provided during summer months to wild animals. After the merger with Independent India in 1947, the downfall of Tal Chhapar began. The expanding Chhapar town and illegal mining started eating into the grasslands. Poaching become rampant. In 1966, the Rajasthan government declared it a sanctuary and posted some guards which cut back on poaching. But urbanisation continued to ‘nibble away’ the grassland till only 7 sq. km was left for the blackbuck. The turning point, in my opinion, came when Surat Singh Poonia was appointed as the range forest officer. He proved what a good forest officer can do for his/her area. By the end of 1990s, I started hearing good things about Tal Chhapar. New bird species were spotted, the harrier numbers increased, blackbuck became more numerous, the dog menace was controlled, and overgrazing by livestock was stopped.

The growth of social media and the craze of photography have now made Tal Chhapar a popular destination for wildlife enthusiasts and photographers. We now get amazing images of wildlife from Tal Chhapar, including the customary sunset with a blackbuck in the foreground. 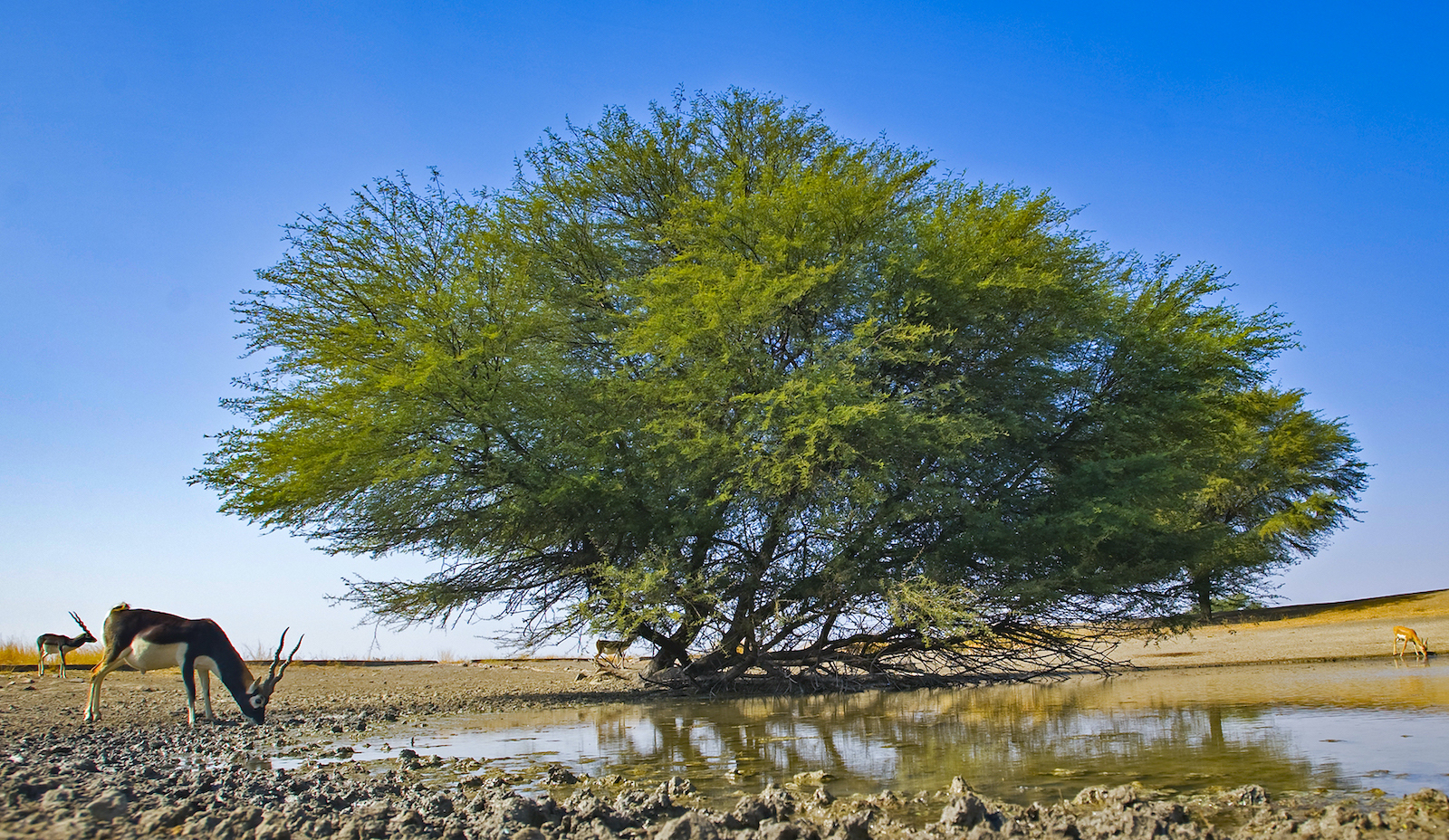 (Top) The landscape has several depressions that fill up with water during the monsoon and turn into watering holes for the animals. A blackbuck drinks water from a tiny pond at Tal Chhapar. (Bottom)The blackbuck is the most common sight in Tal Chhapar Wildlife Sanctuary. A secure habitat has led to its proliferation with 2500 blackbuck seen in the area. Photos: Dhritiman Mukherjee

As the name ‘tal’ suggests, it is an open, flat land with a depression, which used to get inundated during good rainfall years. However, after the blockage of water channels in the Gopalpura Hills and illegal establishment of salt works, the water regime has changed and Tal Chhapar does not get as much water as it used to. The dominant species of trees in Tal Chhapar are Khejri (Prosopis cineraria), Ber (Ziziphus nummularia), and Khair (Capparis decidua). It also has a  variety of grasses and sedges, the most important sedge being Moutha Cyperus rotundus. The brackish soil of the sanctuary also supports salt-loving small bushes and grasses. 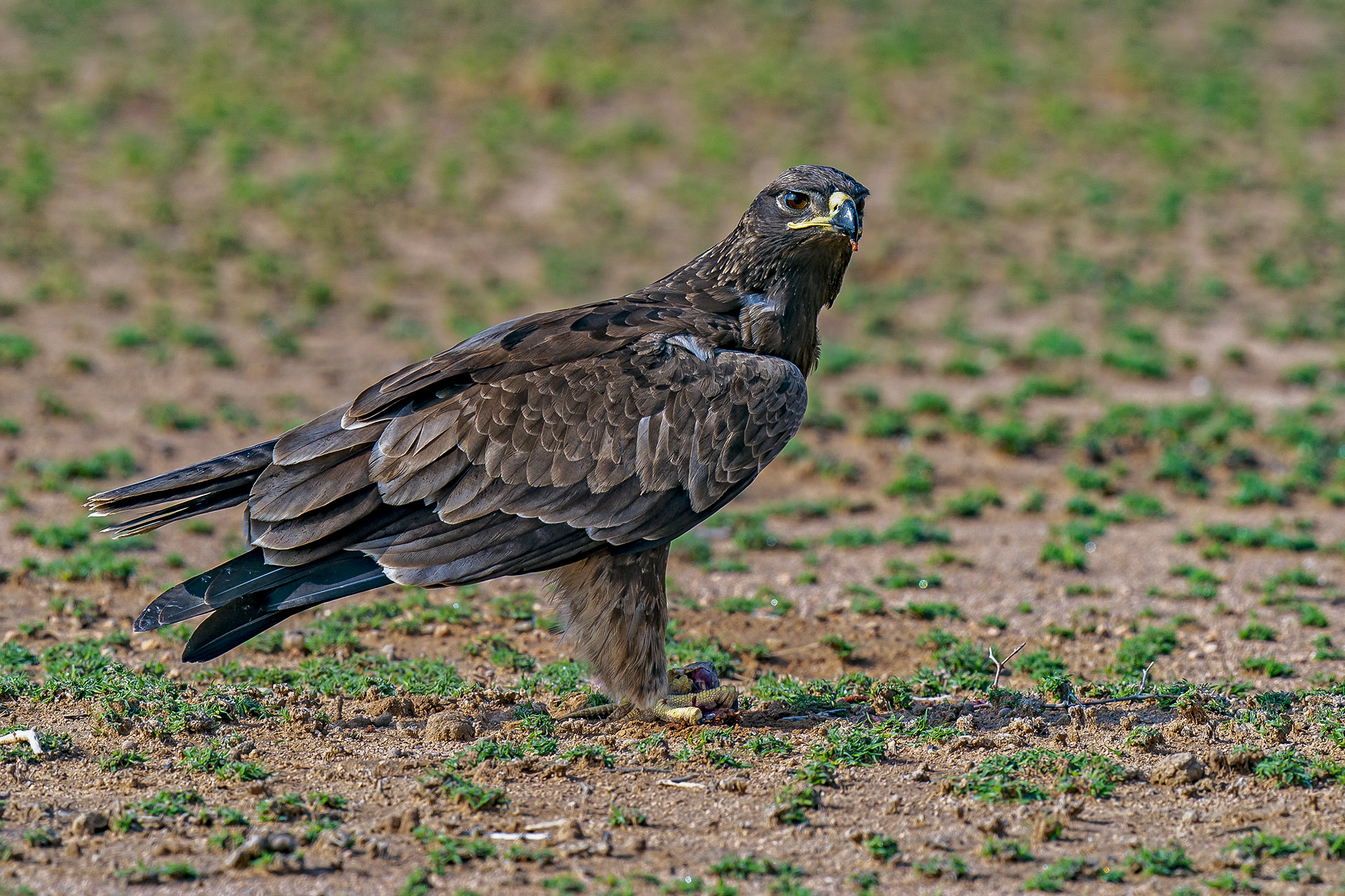 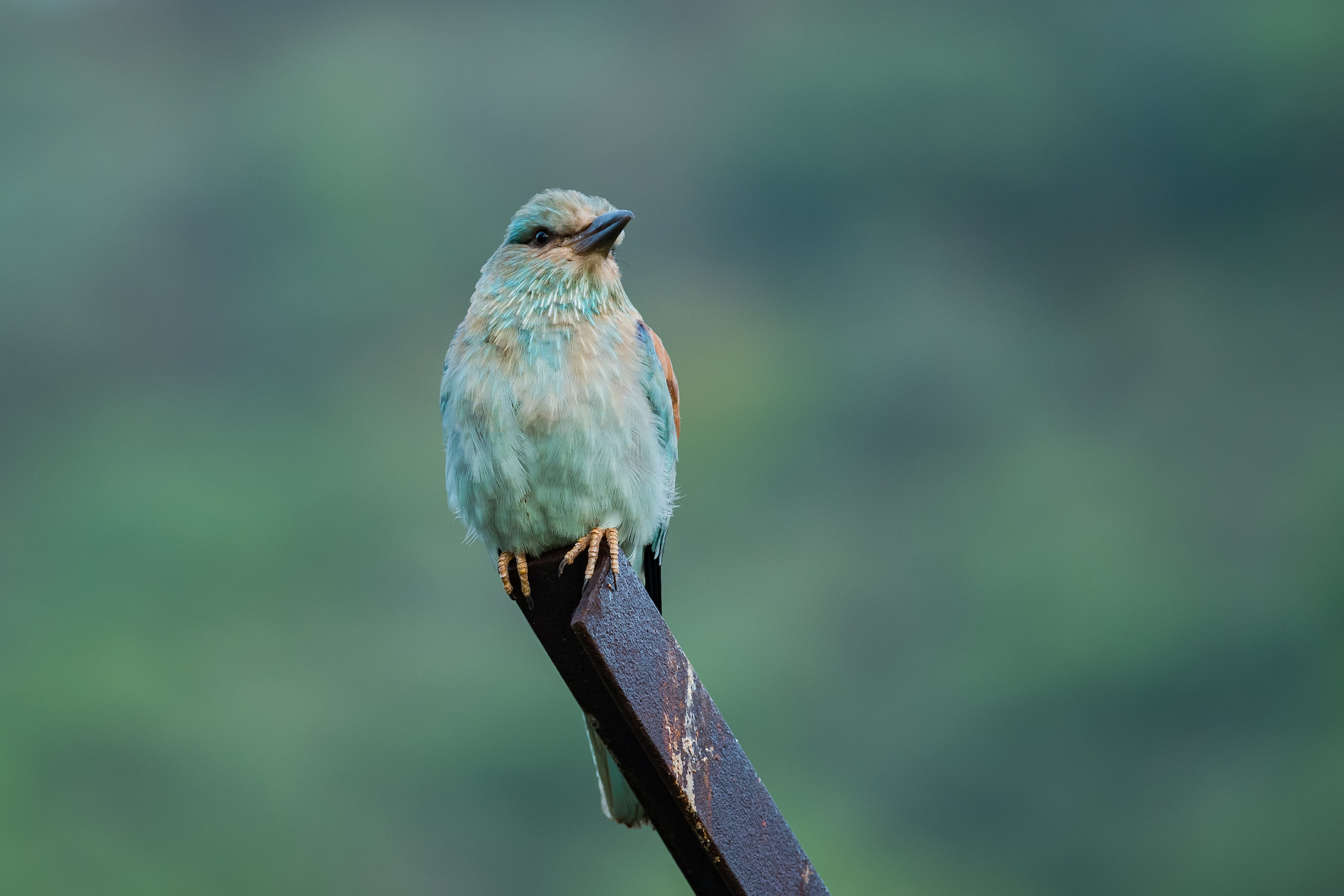 (Left) The tawny eagle is a fierce predator but also an opportunistic scavenger known to steal prey from other raptors. Here, it feeds on a spiny-tailed lizard. Photo: Dhritiman Mukherjee. (Right) The Eurasian roller is a migratory bird that makes long distance migrations, travelling from east and south Africa to their breeding grounds in Europe, Asia and north Africa. Photo: Sourabh Bharti/Shutterstock

During August-September, when the rains have made Tal Chhapar a green heaven, a large number of migratory Eurasian rollers (Coracias garrulus) pass through the area, gorging on grasshoppers that thrive on the green grass. After spending about two  months, the Eurasian roller goes to southern Africa to spend the winter.

Another important species is the bar-headed goose (Anser indicus). It is not unusual to see more than 100 birds grazing in the grasslands of Tal Chhapar. Earlier records show that they used to come in much larger numbers when there was more water in the Park. Till the early 1990s, the white-rumped Vulture Gyps bengalensis used to breed in and around Tal Chhapar. During my surveys in 1993–1994, many nests were located on khejri (Prosopis cinereal) trees, sometimes as low as 4 m. The long-billed vulture (Gyps indicus) was also seen. Both these species are sadly gone.

(Left) The desert cat is a nocturnal hunter and spends most of its day hiding in grasses and burrows. Unfortunately, because of its long, soft fur it is targeted by the international pet trade markets. (Right) The Indian fox prefers flat, scrub landscapes where it can hunt with great ease and dig dens to live in. Photo: Dhritiman Mukherjee

Among mammals, the most famous is of course the blackbuck. Nearly 2,500 of these are present. The other major mammals are the golden jackal (Canis aureus), Indian fox (Vulpes bengalensis), red fox (Vulpes vulpes pusilla), jungle cat (Felis chaus), and desert hare (Lepus nigricollis dayanus). During my earlier visits in 1980s and 1990s, I did not see the chinkara (Gazella bennettii) in Tal Chhapar, though it was present in the surrounding sand dunes. But during my recent visit in September 2019 with photographer Dhritiman Mukherjee, I was pleasantly surprised to see many chinkara in the main tourist area.

All the animals looked quite undisturbed by tourist vehicles, clearly indicating good protection by the forest department. The dog menace is also under control, resulting in sighting of many does with fawns. Earlier, packs of dogs would spread out in the grassland and kill hiding fawns.

The striking black francolin is easily recognised by bright brown neck, white spots around its belly and golden spots on its back. The male is a shy bird, but when it calls it has a loud, shrill metallic ‘keeek-keeek’ vocalisation. Photo: Dhritiman Mukherjee

Presently, Tal Chhapar is one of the best managed sanctuaries in Rajasthan. A grassland area of 900 hectares is fenced and completely free of grazing or other disturbances. Another area of 400 hectares across the road, called ‘goshala’ locally, may also be fenced shortly as the proposal to close the road for traffic is in its final stages. Presently, in this part, cattle grazing is allowed but other indigenous trees have proliferated after removal of Prosopis juliflora, which has resulted in sightings of the spotted tree creeper (Salpornis spilonotus), buzzards, and eagles. The salt-pans and rain water ditches support a number of water birds.

What attracts me most to Tal Chhapar are the large flocks of larks. By winter the grass has shed seeds and become golden in colour. There are not many areas left in India where one can see thousands of migratory larks, flying like an undulating wave over the golden grass that provides them with unlimited seeds. Unlike the beauty of a black francolin calling from a mound or a lagger eating a spiny-tailed lizard, ‘waving flocks’ of larks cannot be captured in a camera properly but it is a sight to behold. In my mind, a blackbuck in the foreground and a large flock of larks in the background would symbolise the perfect Tal Chhapar image.

A flock of larks flies over sprinting blackbuck in Tal Chhapar at sunset. The sanctuary is a paradise for birdwatchers, that flock to the area to photograph migratory birds and raptors. Photo: Dhritiman Mukherjee