How a poacher turned conservationist, and became one of the leading voices fighting for the survival of the maligned Sundarbans tiger

“My friend and I were sleeping right here on wooden cots, under an open sky, when a tiger calmly walked right by us,” says Anil Mistry, 53, pointing to a manicured garden. It’s a chilly December evening, and Mistry and I are sitting on wobbly plastic chairs outside his non-profit organisation in Bali, one of the 104 islands that make up West Bengal’s Sundarbans, the largest mangrove forest in the world. “Why was the tiger here?” I ask, surprised. “What do you mean, why?!” laughs Mistry. “This is the tiger’s home, we are his uninvited guests.” I look around. On our left is an eco-resort, on our right a narrow, concrete jetty lined with tourist boats. Any traces of a forest that may have existed are long gone. But on the other side of the jetty, across the vast channel, I can see the dense and mysterious Sundarbans National Park where several hundred species of flora and fauna flourish.

“This is the tiger’s home, we are his uninvited guests.”

The much feared and maligned royal Bengal tiger is its king. Over the last century, Bali, like every other inhabited island of the Sundarbans (there are 48), has seen severe man-animal conflict. In the period 2018-2019, the tiger claimed the lives of at least 10-15 fishermen and honey collectors who ventured into the Sundarbans forest to earn a meagre livelihood. Until 2015, before the forest department built a nylon fence protecting the island from the forest, the tiger routinely sauntered into their farms and homes to prey on cattle. Calling Bali the tiger’s rightful home, and its human residents intruders, is a radical, risky statement in the Sundarbans. But Mistry comfortably swims against the tide. After all, following the norm has rarely sparked change, and Mistry learnt that early in life. 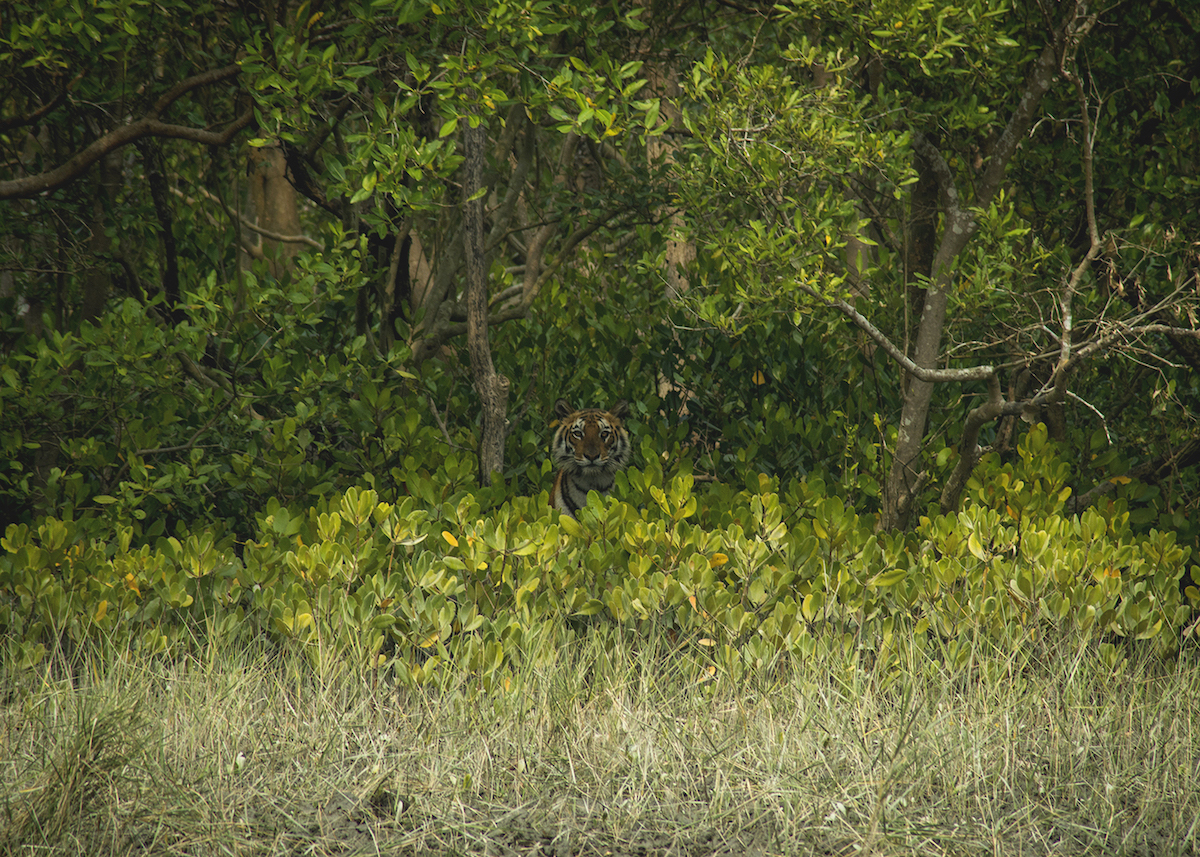 He was born to a family that was among the first refugees from Bangladesh that settled in the Sundarbans 60 years ago. “My father chopped trees down and built these settlements,” he says. With close to no opportunities to earn a livelihood, the family survived on poaching animals that once freely roamed the landscape. He grew up learning to hunt. Almost three decades ago, on a hunting trip he shot a doe, and as she breathed her last, her young, newborn fawn emerged from the bushes. “The fawn, lost, distressed and in pain, started screaming,” says Mistry. While his friends were able to quickly move on from the incident, Mistry, overcome with emotion, marched to the field director’s office and confessed. “I told the officer I come from a family of poachers, but I no longer want to do this. You can arrest me.” Surprisingly, the field officer sent him back encouraging him to keep an eye on the forests around him. Something shifted in Mistry that day. A few days later, when deer meat was served for dinner at home, he vocalised his distress to his father. “I was a hot-headed 20-year-old,” he laughs. “My family was so angry! They could not understand it.”

In the meantime, the field director, amused by Mistry’s multiple trips to his office, engaged him as a volunteer to help forest rangers patrol the area. “No officer born elsewhere can know every creek, every corner of the Sundarbans like we do,” he says. In patrolling and protecting the forest Mistry found his calling.

Anil Mistry has lived on several different islands in the Sundarbans through his life,and knows itsforest and inhabitants, human and non-human, intimately. Photos: Dhritiman Mukherjee

Over the next decade, Mistry became a bridge between conservationists, the forest department, and local communities in the Sundarbans. In villages, he spoke of protecting the forest, introducing terms like ‘conservation’ and ‘biodiversity’ into everyday conversations. At the forest department, he fought for the release of woodcutters and poachers, instead pushing authorities to involve them in patrolling the forest. “In my first year of patrolling I must have caught at least 200 hunters and woodcutters,” claims Mistry. “That is how widespread it was!” Soon, several villagers, with their intimate knowledge of the forest, joined the forest officers on their missions — guiding them through unfamiliar canals and narrow creeks, educating them about the tides, and giving them tips on how to survive in a secretive forest.

“On a single day, we would hear of at least two cases of tigers having walked into villages.”

But protecting the animals in their natural habitat was not Mistry’s biggest challenge. Until about 2014, the inhabited Sundarbans islands had no protection from forested islands. Only recently, the forest department built a nylon net that discourages tigers from travelling to the inhabited islands to look for livestock or cattle. “On a single day, we would hear of at least two cases of tigers having walked into villages,” confirms Mistry. “We would be rescuing a tiger in Arjelia, and we would hear that a tiger has entered Sonaghat. Ten a years ago, there was just one tranquilising officer in Canning, over three hours away by boat. Those were difficult times.”

Though the Sundarbans lies less than three hours away by road from Kolkata, one of India’s largest metros, poor connectivity between land and water, constant storms, and lack of basic amenities makes life on its islands a struggle. Photo: Shutterstock/Emdadul Hoque Topu

If a tiger strayed into a village, many believed, that it deserved to die. In the past, mobs would pelt a tiger with stones, poison it, shoot it with a country gun, rarely killing it, but injuring it severely. On a fateful night in 2007, not one, but three tigers — a mother, and her grown cubs — walked into Bali. They killed a goat tied inside a shed, and while the cubs stayed on to feast, the mother left. Those around the house stayed huddled in their rooms, terrified, but by the crack of dawn the news had spread like wildfire. While Mistry and forest guards surrounded the shed with a flimsy nylon net and waited for the tranquilising officer to arrive, thousands of people turned up, screaming, heckling, running. “On the one hand the forest officers were trying to manage the tigers, but the people were proving to be harder to control!” says Mistry. During the commotion, one tiger escaped into a nearby paddy field. “The crop was high, and I could not spot it,” he says. But suddenly, the tiger attacked him. “In self-defence, the tiger meant no harm,” Mistry emphasises. The crowd panicked, and amidst the chaos the forest guard aimed at the tiger and took a shot. Within seconds, the tiger was dead. “We murdered a harmless, handsome tiger cub,” says Mistry. He talks of how he felt unsettled for days. “We often forget that the tiger has lived here for hundreds of years, we have come to destroy it.” On a couple of occasions, when Mistry tried to protect a tiger that had strayed into a village, he was brutally beaten.

Anil Mistry’s work no longer focuses only on the tiger and animal rescues, but plays a crucial part in building local economies, education, and awareness around conservation. Photo courtesy: Anil Mistry

But on the day the tiger attacked him, people witnessed how somebody who had been fighting them and defending the tiger, was attacked and almost killed. “Do you see why this job is hard?” he asks me. “The villagers see the tiger as their enemy, and if I try and protect it, they see me as their enemy.” But despite the risks, over the last 30 years,  Mistry has been a crucial part of rescuing at least 70 tigers. He shows off the multiple scars from tiger attacks on his body as badges of honour. Thanks to his efforts, today, when people see a tiger, they call him first. In return, once the tiger is safely caught, he urges some of them to accompany him to the forest where the tiger is released. “It is the best feeling to watch a tiger go back to the wild,” he says. “My hope is that they will feel what I feel.”

Today, his non-profit ‘Bali Wildlife Nature and Conservation Society’ works towards introducing the idea of conservation in Bali, for the wellbeing of the forest and as a lucrative tourism and economic opportunity for the locals. He conducts nature camps in schools, involves local communities in other livelihoods, and discourages them from venturing into the forest to collect honey or catch fish. His efforts are now funded and bolstered by leading international conservation organisations such as the World Wide Fund (WWF) and Belinda Wright’s Wildlife Protection Society of India. In November, when cyclone Bulbul ravaged the island, his office and home turned into a temporary hospital and shelter.

Today, Anil Mistry’s work has made him spokesperson for the Sundarbans on national and international platforms. Photo courtesy: Anil Mistry

During my week-long stay in the Sundarbans, I hear Mistry’s name often. Conservation experts direct me to him as a credible source. My forest guide tells me Mistry is his mentor. One evening my boatman’s wife casually mentions that Mistry is her mother’s distant cousin. “He is like my brother,” she says proudly. I spot him several times every day, walking through the paddy fields of Bali, often busy on his phone, but always surrounded by an entourage. On one of these meetings he casually introduces me to his friend, “He was also a poacher, like me,” he says. His friend, beaming, shakes my hand furiously and confirms, “Now I protect the forest.” Despite the looming fear of the tiger and the persistent poverty of the area, Mistry has managed to do the seemingly impossible — erase the stigma of being an ex poacher, build love and empathy for the feared and maligned tiger, and carve a path for many others to follow. He has not only made the transition from poacher to protector of the forest seem effortless, but also promised that there’s both hope and dignity on the other side.