The greater adjutant has been called many things — ugly, filthy, a bone-swallowing bad omen — until Purnima Devi Barman, and her army of 2OO women, decided to adopt the endangered bird

On a rainy day, I am sitting in wildlife biologist Purnima Devi Barman’s home in Guwahati, Assam, chatting about an endangered five-foot-tall, scruffy bird called the greater adjutant. With a large wedge-shaped beak, bald head, a wrinkly pouch dangling from its neck and dull grey feathers, this unsightly bird has been receiving bad press for far too long. “It lives in a garbage dump, feeds on beef and carcasses, and carries the remains to the trees it nests on,” says Barman. “Because of its habits, the bird is considered a bad omen.”

In Assam, the scavenger is called the ‘hargila’, meaning ‘bone swallower’. Its English name ‘adjutant’ comes from its awkward, stiff gait. The bird’s call is far from melodious, and it produces significant amounts of poop, staining entire trees. But Barman talks of it with maternal pride. “It is so beautiful. Who could find it ugly?!” The walls and tables of her living room are packed with photographs of the bird, and trophies she has won for its conservation, including the prestigious Whitley Award in 2017. During the interview, she pulls out a mekhala chadar, a traditional Assamese sari, with delicately embroidered motifs of the hargila. There are papier mâché masks of the bird lying in her bedroom. It suddenly starts thundering outside, and Barman seems a little uneasy. It has poured the previous night and the bamboo towers she has built as alternative nesting platforms in a village two hours from Guwahati, may be at risk. “I could not sleep all night. Only when I heard that the scaffolding is still standing, I was at ease,” she says. “These birds are my children.”

The story of the greater adjutant has seen several plot twists. In the early 20th century, the bird was found across south and Southeast Asia — in Pakistan, India, Nepal, Bangladesh, Vietnam, and the Cambodia. In View from Calcutta, Sukanta Chaudhuri writes how about 100 years ago, Calcutta was swarmed with the birds that survived on the refuse of the city. The bird was so frequently seen and appreciated for its scavenging abilities — it cleaned carcasses leaving no bones behind — that it made it to the coat of arms of the colonial city of Calcutta under the British Empire. You will still see a coat of arms featuring two greater adjutants facing each other, with serpents in their mouth, on old heritage buildings. But the bird has fallen from fame since then. It is no longer found in Kolkata. Trees have been mercilessly chopped to discourage the bird from breeding. Nests have been smoked to drive them away. However, their population though restricted to two nesting sites in Bihar and Assam in India, is thriving thanks to grassroots initiatives that are securing its habitat. In 2007, it was listed as ‘Endangered’ under the IUCN Red List with a declining global population of around 1,200, of which about 800 are found in Assam. A large group is concentrated in Dadara and Pacharia villages in Kamrup district situated in the valley of the Brahmaputra River, about two hours from Guwahati. Though unloved, like most scavengers, the greater adjutant, are cleaners of the environment, and central to its wellbeing. 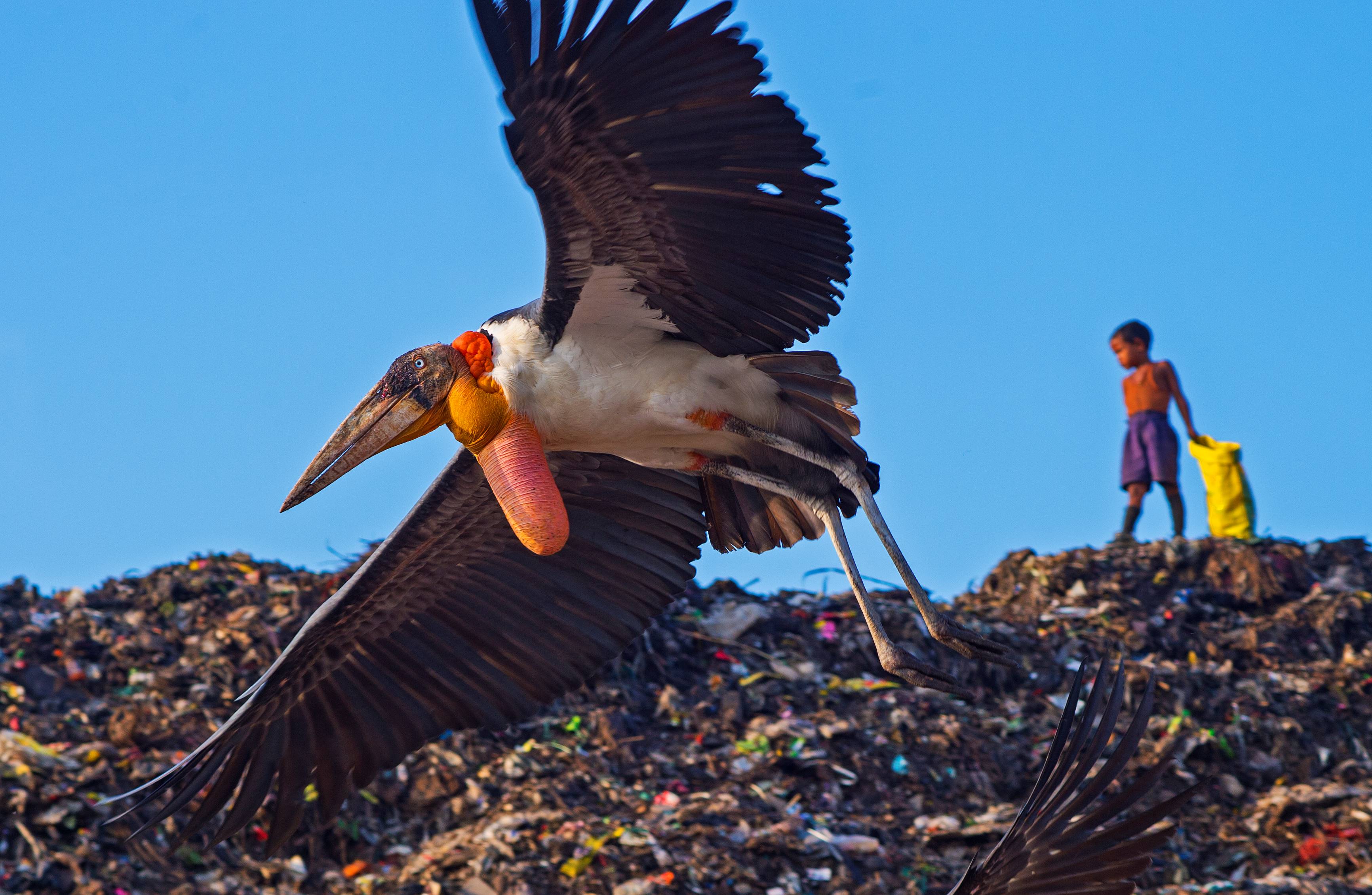 The greater adjutant is an omnivorous scavenger, frequently found around shallow lakes and wetlands where it feasts on frogs, snakes, and other reptiles; and near garbage dumps where it eats human and animal waste. Photo: Dhritiman Mukherjee Cover image: Purnima Devi Barman and her army of women regularly organise rallies and community programmes in villages, where they educate others about the need to conserve the greater adjutant. A papier mâché hargila that they make is their favourite headgear. Photo courtesy: Purnima Devi Barman

Barman first saw the greater adjutant as a child on a farm, at a time when the bird roamed freely without fear. Her father worked with the army and her parents often stayed away from home. To keep her entertained, her grandmother told her stories and sang to her about birds. “She would drag me to the field to show me birds. She’d say, if I sing to the egret it will gift me a white bindi. If my heart is clean, the colour of henna will be bold,” says Barman. These stories stayed with her. When she grew up, it felt as if the stories led her to zoology. “My grandmother’s stories have guided me all my life.”

In 2007, when Barman returned to the field for her PhD research she saw fewer hargilas than she had as a child. Then one day, she saw a man cut a down a nesting site. “I stood there and fought with him, and he fought back. No matter how much I screamed, I couldn’t save the tree,” she says. “I was naive. It is when I realised that I have to involve people. I have to talk to them.” Though Barman wanted to pursue her PhD, she realised the futility of only writing research papers and books that weren’t backed by engagement in the field and the communities that lived around it. But protecting the bird meant dealing with mammoth challenges. Funding for charismatic species like the tiger and the rhino is abundant, but for a scruffy bird like the greater adjutant is rare.

Barman’s work is also not restricted to protected habitats, supported by laws or the government. The greater adjutant’s habitat is spread over densely populated villages where they feed on garbage dumps and wetlands. Hargilas live in people’s backyards. Barman’s estimates show that the Kamrup district supports over 140 nests each year, possibly the largest nesting colony on the planet. Villagers are known to smoke trees during the bird’s breeding season or chop them down to avoid nesting. “A tree was once located on a property owned by five brothers!” she exclaims. “Imagine convincing all of them to not cut a single tree that is causing them great trouble.” Barman had to constantly keep knocking on doors, convincing suspicious villagers to join her cause. 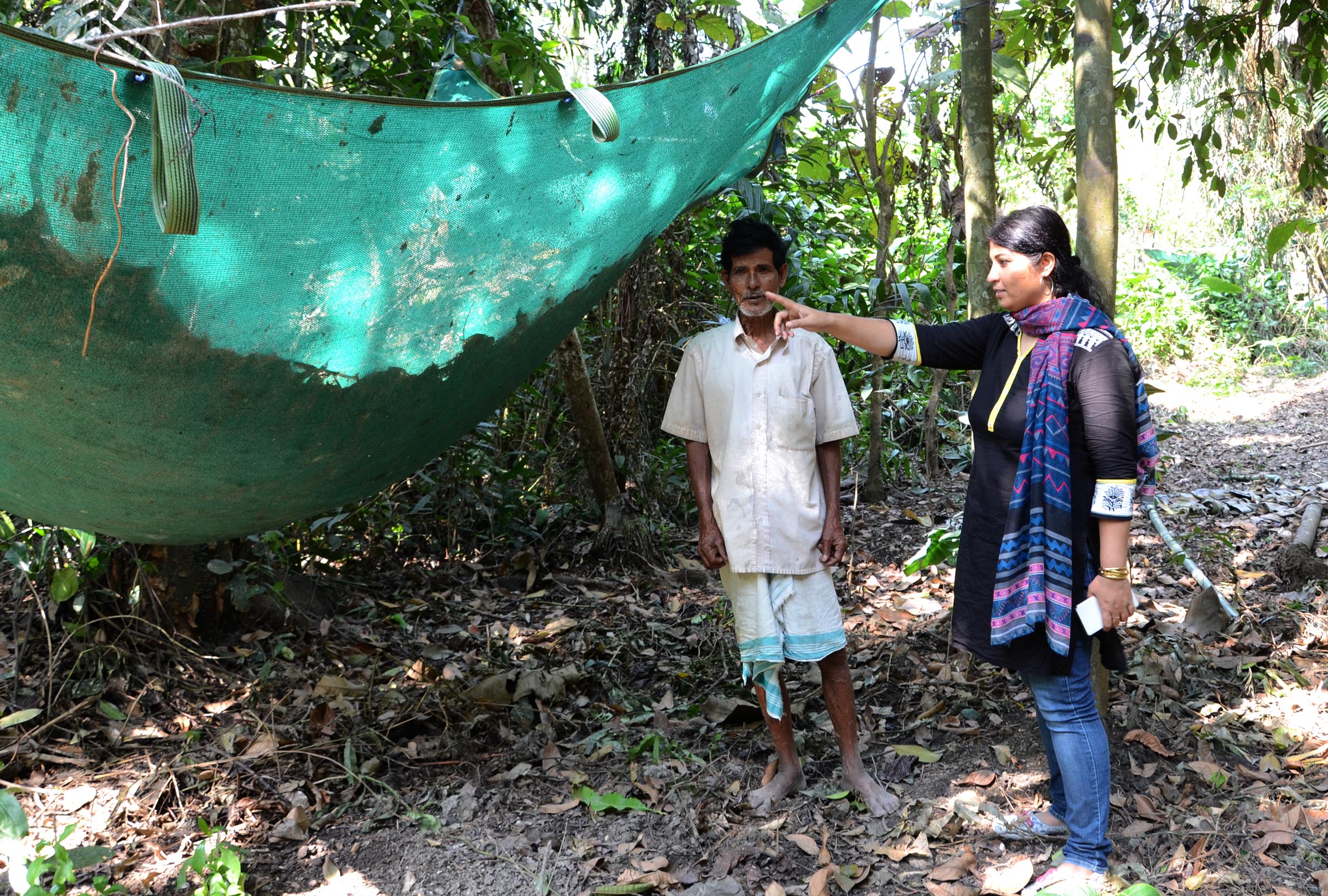 Purnima Devi Barman supervises a net under a nesting tree, put in place to protect the newborn chicks from falling to their death. Photo: Abdul Gani

In 2009, Barman, through Aaranyak, a Guwahati-based non-profit that works towards nature conservation in Northeast India, initiated a community-based conservation programme to protect the species. But how do you rally people to save a stinking bird who brings carcasses to their backyards? “Men would dismiss me. The women would laugh, but they would invite me into their home, and they would listen,” says Barman. Early in her work, Barman organised cooking competitions in backyards, and used the opportunity to talk to women about how essential the hargila is for our habitat. “Women are sensitive and sincere. We often underestimate what they can do.” Thanks to her grandmother’s stories, Purnima recognised early in life what an important role culture, songs, and everyday rituals play in shaping our worldview.

Barman started organising baby showers for newborn hargilas to discourage people of the village from cutting trees. She mobilised theatre groups that wrote plays for the bird and made them a part of local celebrations. “I told them the hargila could have gone to any village in Assam, but it chose yours. It is your child and you must protect it,” she says. “You treat it right and the hargila will bring you pride and fame someday.” And it has.

After a decade of community work, Barman has trained over 200 women in Kamrup district to campaign and conserve the greater adjutant. Several of these women conduct independent rescue operations, handing over injured birds or rescued chicks to the Assam Zoo authorities. Women from the army also regularly interact with forest officials and local policemen who now support their conservation efforts. Fondly, across the state, this band of women has earned the title of the Hargila Army, and Barman is known as Hargila Baido, the bone swallower’s sister. Today, tourists turn up to see the hargila and meet the army that protects it. Many of the women are also employed with handlooms where they make hargila motifs on embroidered scarves, and traditional saris. During their free time, they keep an eye on the nests, tying nets under nesting trees to save the young ones from falling.

These days, Barman climbing 80-foot-high bamboo scaffolding in a sari to check treetops for hargila nests is a common sight. The movement, on the other hand, has taken on a life of its own. The hargila is included as a family member in wedding ceremonies; in Dadara, two greater adjutant statues were built at a higher secondary school and the hargila is now a part of morning school prayers. The fate of the bird is slowly, but steadily, turning around. Ever since 2010, after the Hargila Army took charge, Barman claims that not a single nesting tree has been cut. When she started her work in 2007, Barman counted only 30 nests. Today, there are over 150 nests, all under tight vigil, protected by nets to catch falling young ones. “When I started working here, people said, ‘How will village women make a difference?’ But look at them now,” she says.