The line crackles with static and the voice on the other end warps by the time it reaches my ear. I hear him chuckle now. “Where did this all begin? That’s a long story,” cautions Manoj Gogoi. “But if you have the time, I’ll tell it to you. It began behind the wheel of a car…”

Assam’s Kaziranga National Park spreads in a vast blanket across the floodplains of the moody Brahmaputra River. This mosaic of woodlands, grasslands, and wetlands houses an exceptional array of charismatic mega-fauna, which attract hundreds of tourists from across the world every year. The local economy depends on the park, and in 2005, 30-year-old Manoj was making a living from tourism too. Everyday he would pile visitors into his friend’s Gypsy and drive them through Kaziranga, hoping for a big cat sighting to sate their tiger-spotting need.

It was sometime that year that Manoj’s Gypsy trundled to a halt behind a vehicle in which a gentleman was thumbing through a bird book. That man was Ashok Verma, a raptor specialist from the Bombay Natural History Society (BNHS). Feeling Manoj’s curious gaze upon him, Ashok struck up a conversation. By the end of that safari, Manoj had a new friend and an invitation to spend a week exploring the biodiversity-rich Karbi Anglong landscape. In the days that followed his eyes fully opened to the natural wonders of his homeland for the first time. When Ashok left Assam, he gifted Manoj a pair of binoculars and asked him to visit the BNHS office in Mumbai.

The next year passed in a whirlwind of life events — Manoj fell in love, got married and set up home. But still, the lure of the big city didn’t fade. In 2006, a friend booked him a ticket and his wife wept as Manoj boarded a train for Mumbai with little more than three thousand rupees in his pocket. For a month he explored the city, shadowing members of the BNHS team, learning about natural history and understanding the need for wildlife conservation. Gradually the terror that had gripped him upon witnessing the chaos of Mumbai faded to familiarity, but the calls of love and longing from home could not be ignored and so he returned. Back in Assam, Manoj found a job as a guide with Iora, a nature retreat, and began to hone his naturalist skills, making use of the books shared with him by his Mumbai mentor, Girish Jathar. 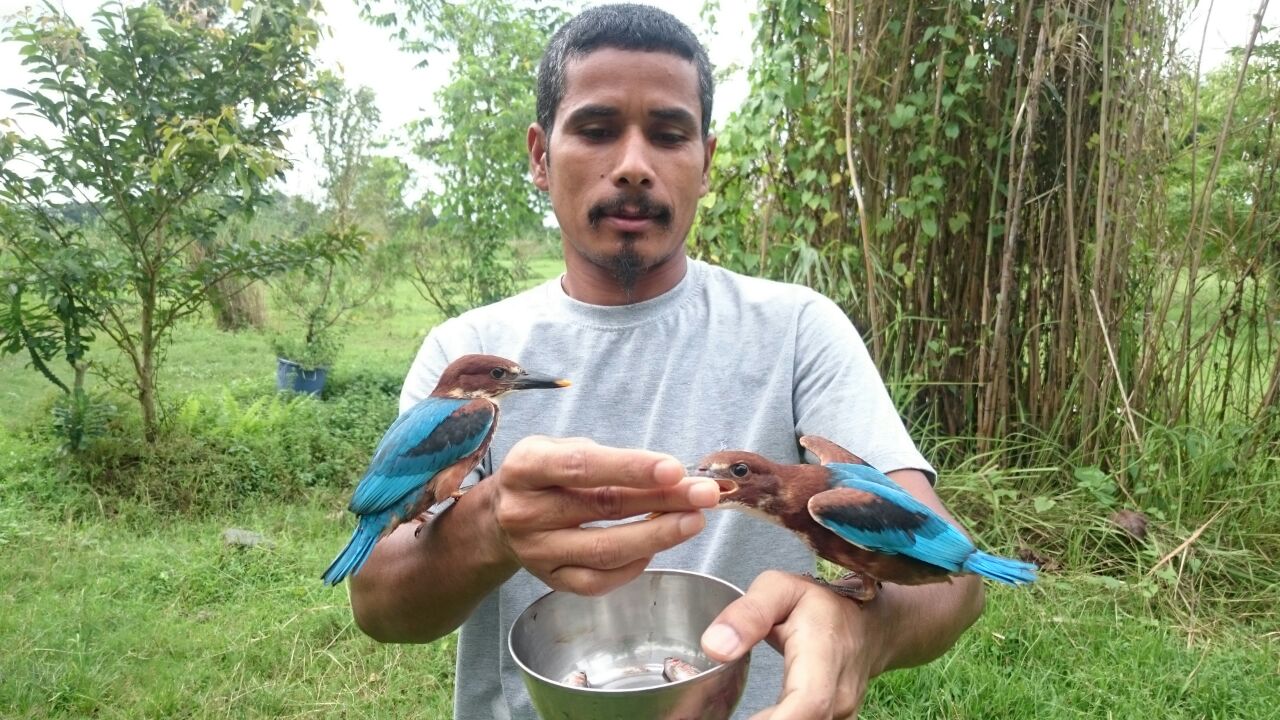 Manoj feeds a pair of orphaned, sibling kingfishers that he has raised since they were hatchlings. The birds have since been released into the wild. Photo Courtesy: The Corbett Foundation

It was during a morning stroll in October 2007 that Manoj saw a crowd gathering on the path, exclaiming excitedly at something on the floor. The previous night, a python had swallowed a prized chicken and it was now sluggishly digesting its meal. The crowd, including the incensed owner of the chicken, was debating the python’s fate. But it was Manoj that took a decision. He calmed the mob, and with shaking hands whisked the snake away from certain death. It was the first of hundreds of rescues to follow.

The python on the path gave Manoj new purpose, and its safe release flooded him with relief. With tips from his guiding job, he began to rescue and nurture wild animals at home, slowly building cages and learning the different requirements for each species. When his first daughter Bhoomi was born, he shifted his operations to his friend Sunil Kumar Sen’s land in the neighbouring village of Dumjaan. On this barren patch he planted fruiting trees, dug small water bodies, and built enclosures, creating a little haven for his recovering wild wards. With unwavering faith in the power of observation, and an unerring instinct, he learnt much from the orphaned and injured animals. Along the way he was also learning about innovating enrichment and diversifying diets. The former refers to honing the skills of wild animals so that they may be released into the wild. The latter is centred on understanding the different dietary requirements of species, and that what works for one bird may not work for another. Coupled with all this Manoj also learned to deal with and mourn the inevitable loss of some of his wards.

“But you can’t work only for animals, you have to work for people too,” says Manoj. In 2008 he established Naturalists for Rescue of Snakes and Birds, a voluntary organisation to which he immediately recruited 11 boys and girls from the community. Today, over 100 youth from the villages around Dumjaan, near Kaziranga, work with Manoj, serving as an informant network and first responders for wildlife rescues. Many of these young adults also attend Manoj’s regular naturalist training camps and have found livlihoods as nature guides with the innumerable resorts that dot the outskirts of Kaziranga. Children flock to Manoj just like animals do, and each week he leads nature trails for the young ones in his community, sparking in them a love and respect for the living world.

Community awareness and sensitisation is crucial to wildlife conservation efforts. Manoj regularly leads children from the community on nature trails and introduces them to the wonders of nature. Photo Courtesy: Manoj Gogoi

With growing responsibilities came growing expenses, and in 2013, Manoj was grateful to receive a fillip from The Corbett Foundation (TCF). Its director Kedar Gore had heard of Manoj’s ‘animal whispering’ and put him on his payroll, while TCF veterinarian Dr. Naveen Pandey commenced Manoj’s training in wildlife first aid and recovery. This association also strengthened Manoj’s relationship with the forest department, and it’s no secret that they call on him for difficult wildlife rescues, and count on his support during the devastating annual floods of Kaziranga.

I first heard of Manoj from Kedar in 2016, and soon after, selected him to receive support from the Mud on Boots Project, a Sanctuary Nature Foundation programme that supports grassroots conservationists across India. In the two years that I have known Manoj, pictures of all manner of rescued wildlife have flooded my inbox. There have been kingfishers and kraits, jungle cats and bats, rhinos and leopards. And in each of these images is Manoj, over 40 years old, boyishly clad in shorts, his eyes fixed on the animal in his care.

I ask him what it feels like to be a mother to so many, to spend sleepless nights and exhausting days caring for a being that will be released into the wild. “I feel a pang in my heart each time, of course,” he admits, “But their freedom makes me happy”. He tells me then of the orphaned brown fish owl that returned to visit him three months after being released, and of the white-throated kingfisher siblings that lived free, but would return to perch on his hands when called. He tells me also of the jungle cat kittens for whom he has built a remote enclosure so that they do not get habituated to humans, and who are now learning to hunt. And he speaks with deep remorse of those that couldn’t be saved. 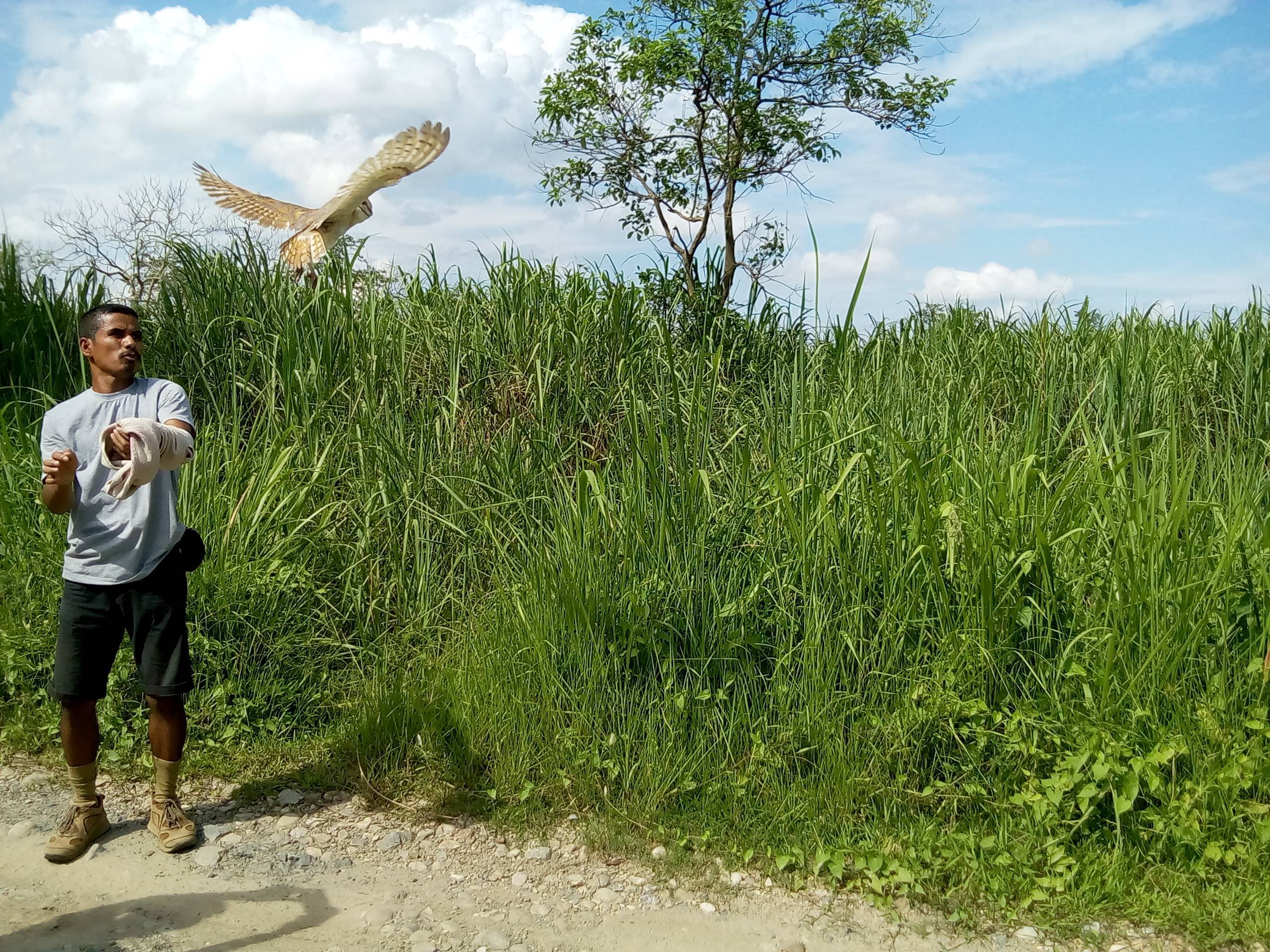 A barn owl that was hit by a vehicle returns to the wild after making a complete recovery under Manoj’s care. Photo Courtesy: Manoj Gogoi

Manoj is a local hero now. Everyone in the area has his number saved on their phones, and knows to call him for any wildlife emergency. There are articles and interviews about him in the local media, and last year two college students Dhritiman Kakati and Raktim Hazarika made a beautiful short film The Man Who Speaks Nature on him. It would be easy to become arrogant after receiving such accolades, but I suspect that Manoj’s relationship with animals keeps him grounded. “I respect each animal. I handle them according to their comfort not mine,” he says. “But at the end of the day, one Manoj Gogoi can’t do wildlife conservation alone. The Earth needs all of us to listen more closely,” he adds. 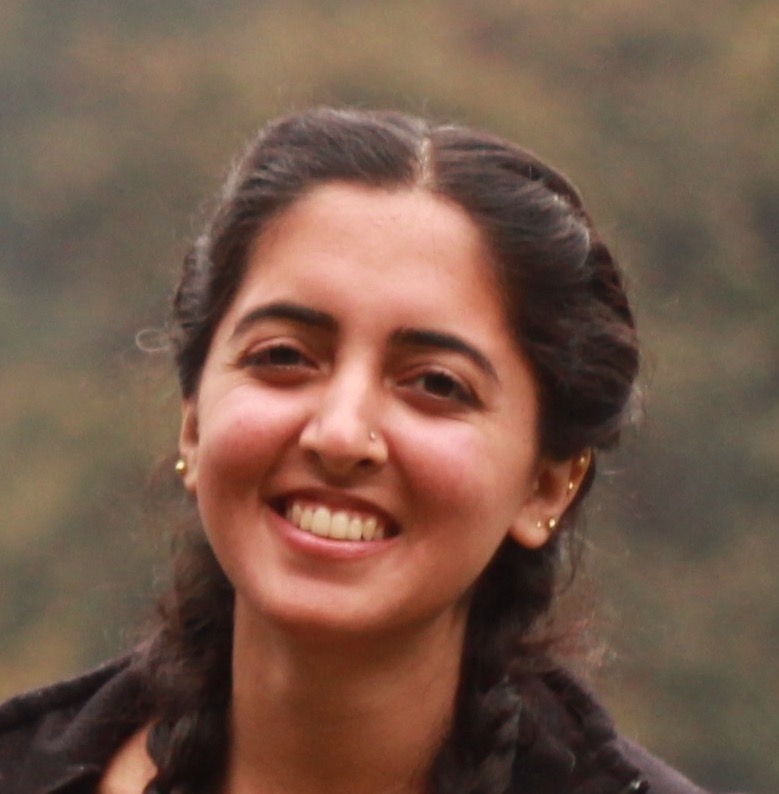 is a writer and wildlife conservationist with the Sanctuary Nature Foundation.