Newly-elected Member of Parliament from Odisha, Pramila Bisoyi, is known for her grassroots conservation efforts, particularly protection of the peacocks around Pakidi hills 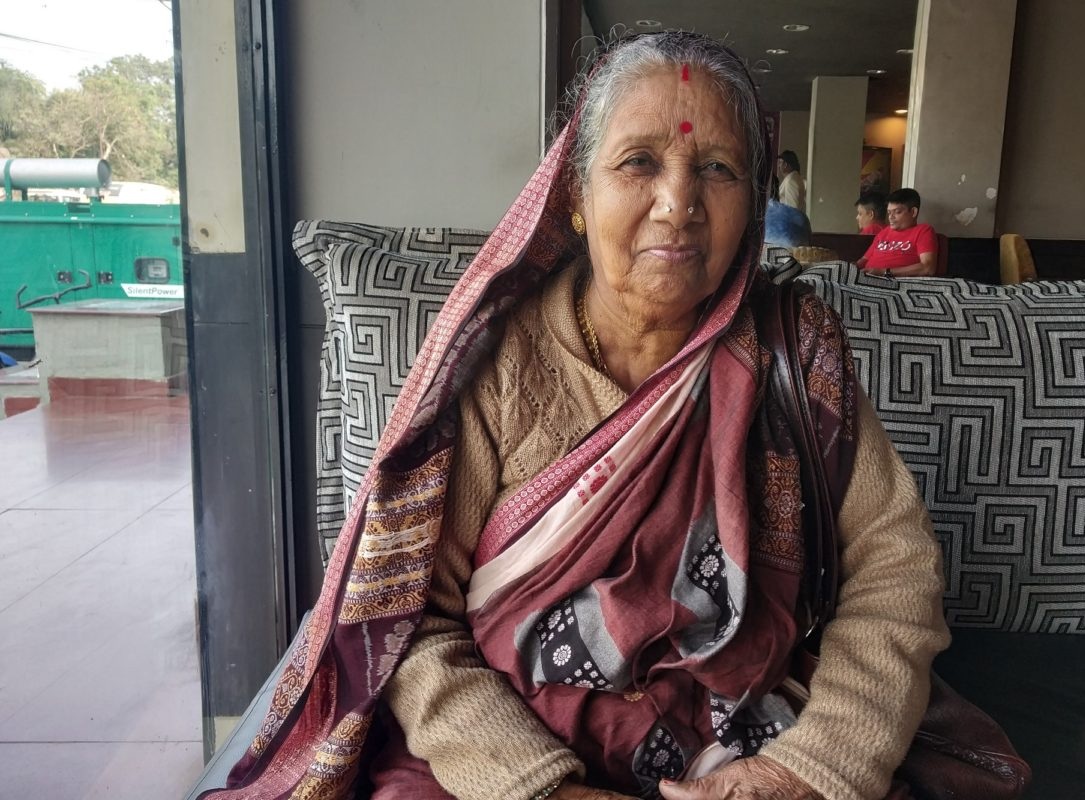 When newly-elected Member of Parliament from the east Indian state of Odisha, Pramila Bisoyi spoke in the House in her mother-tongue Odia, it was the subject of many jibes.

The 71-year-old political greenhorn was draped in the traditional Odia attire of a Sambalpuri check sari, donned twin nose-pins, a prominent red ‘bindi’ on her forehead and sported a thin line of vermilion in her hair parting. At a time when politics is more about muscles and money, Bisoyi’s proclivity to her roots stands out in stark contrast.

Odisha Chief Minister Naveen Patnaik fielded the grassroots conservationist as a political candidate in a tribute to the hundreds of thousands of women involved in the state’s ‘Mission Shakti’ movement that empowers women through creation of Women Self Help Groups (WSHGs). Though many branded Bisoyi’s nomination a vote bank politics, some analysts found it to be a masterstroke.

The diminutive septuagenarian, who lacks formal education, hails from the village of Chermaria in Aska block of Ganjam district, on the foothills of the Pakidi hill range, which is around 200 kms from Odisha’s capital Bhubaneswar. She was elected to the 17th Lok Sabha in May 2019, representing Aska constituency.

Fondly addressed as Pari Maa (angel-mother in Odia), Bisoyi is a community organiser and environmentalist working for the protection and conservation of forests and wildlife and a range of developmental issues. Green activists see her win as a silver lining in the dark times when the impact of climate change is at its worse.

Bisoyi is especially known for stepping up efforts to protect the Indian peacock (Pavo cristatus), the national bird of India, in Aska’s Pakidi hills that come under Pakidi Demarcated Protected Forest, spreading over 1970 hectares of area in Ghumsar south forest division.

As Mongabay-India caught up with Bisoyi, when she landed at the Bhubaneswar airport from Delhi following Parliament’s winter session in December, she expressed anxiety over the status of forests and the peacocks, during her absence from Aska.

Through her month-long stay in the national capital Delhi, she would call up her associates in her village to enquire about the forest and the peacocks. Bisoyi had instructed Surath Pradhan, a close associate who is now her personal assistant, to ensure that there is no instance of tree-felling or poaching in and around Pakidi hill.

Bisoyi’s efforts over time have brought the hill that was stripped of its green cover two decades ago back to life, with green and purple-hued dense forest that shelters over 3000 peacocks, said Aska forest range officer Prasanna Kumar Sahu. “We are now calling it a peacock sanctuary,” he added.

The regeneration of a forest

Bisoyi has been a witness to nature’s rich bounty and the subsequent disappearance of forests, the rivers and the peacocks after she arrived in Aska as a young bride over five decades ago. “When I came to my in-laws’ place here at the age of 14 in the 1970s, Pakidi hill was covered with dense forests. The rivers, Badanadi and Rushikulya and streams used to flow throughout the year. Gradually, the forest was stripped of its greenery, thanks to rampant tree felling and stone quarrying. The streams and rivers began to dry out and temperatures soared,” Bisoyi recollected.

In 2000, a group of women led by her held a meeting and resolved to regenerate the forest. With the support of forest officials, they took up a plantation drive. Women from 15-20 peripheral forest-dependent villages were also involved in the drive. Together they would fill up huge fissures created by stone quarrying with truckloads of sand and soil, check cattle grazing, carry water in pitchers from our village to water the saplings and along with it all, fight people who were opposing their initiatives, explained Bisoyi.

The Pakadi hills forest conserved by Bisoyi and her SHG members where peacocks are abundant. Photo: Pragati Prava

The greening efforts in Pakidi paid off.

“As the plants grew to a certain height, we started hearing the screeches of peacocks that shattered the silence around us. The screeches had stopped decades ago. The sound and sight of the beautiful birds strengthened our determination to protect them,” said Bisoyi, whose forte lies in her poetic oratory that not only appeals to her co-villagers but draws the attention of people who don’t understand her language.

In Aska, The Peacock Protection Committee (PPCA) was formally started in 2002 with the support of the forest department. “We approached the people of peripheral villages of Pakidi hill seeking their cooperation. When we reached Chermaria, we were delighted to see women-led by Pramila Maa were already taking steps to protect the birds,” said Samir Ranjan Pradhan, president of the PPCA.

Talking about the measures taken for protecting peacocks, Bisoyi said, “As peahens lay eggs in bamboo bushes, we planted bamboo and now the forest is dotted with hundreds of bushes.”

To ensure availability of water for peacocks, three diversion watersheds, locally called bandhas, were created by obstructing forest streams on the hill. People also created more than 10 ponds on the hill, said Pradhan. “Since these water reservoirs dry up in summer, we constructed several cement containers inside the forest and in summer we carry water to fill them up,” added Bisoyi.

The birds however, cause damage to crops. But the villagers never harm them, as they consider the birds as a messenger of Hindu god Krishna and a symbol of prosperity and peace. “If we see an injured peacock, we ensure their proper treatment,” said Tarini, a tribal community member who leads forest protection initiative in Bharat, a neighbouring village of Chermaria.

Mushrooming of stone crusher units in some parts of the hill has posed survival threats for peacocks. The villagers have written to the central government, People for Animals chief Maneka Gandhi and the district collector, but to no avail, said Pradhan, adding, “Pramila Maa will certainly take strong measures to protect the hills.”

Under Bisoyi’s leadership, women in the forest-dependent villages have taken up rotational patrolling to shield the forests. They also advocate sustainable use of forest resources.

“A group of 5-10 women guards the forest every day. Tree felling and poaching have stopped since 2006. We also take measures to save the forest from fire,” said 70-year-old Sari Gouda, a forest-protection group member of Chermaria.

“Whenever any villager or a group member requires timber, we select trees judiciously and try to use dead and dry ones. We always replace it with a sapling,” Bisoyi explained.

Bisoyi received the Prakriti Mitra (Friend of Nature) award in 2007 from the state government for greening efforts at Pakidi.

Preparing the next generation

While her generation has been hard at work in saving and restoring forests, Bisoyi has reposed faith in the next generation to not only take up the mantle but improve on it. She has a knack for storytelling and infuses her narrations with the importance of saving forests and wildlife to imbue ecological consciousness in children.

“I used to cook mid-day meals in the village upper primary school and Anganwadi centre (government-run rural child care centre) before I contested elections. When I get a little time from cooking, I plant trees on institution campuses,” she said.

The children would huddle around her and Bisoyi used this as an opportunity to prepare the next line of soldiers to protect the environment.

“I would tell stories to them and in every story, I would add the importance of forests and trees. In the popular story of ‘thirsty crow’, I would tell them as the clever crow puts pebbles in the half-filled pitcher to get the water level to rise, you all should be wise enough to protect and regenerate forests to recharge water sources. The children would then promise to work for protecting forests,” she said. “I always encourage girls to take the lead as women work from the heart,” she added.

‘Regeneration model should be replicated’

Bisoyi, who studied till the third standard and had to drop out of school after she got her periods, is well aware of climate change and global warming. “All of us need to plant trees and protect the existing ones to get clean air and water and check the rise of temperature,” she says.

“Deforestation has been rampant across the country. I want to visit places with denuded forests to tell them our story and ask them to follow our regeneration model,” she added. She also intends to learn from successful forest conservation movements across the country.

Odisha has over 600,000 women’s SHGs created under the Mission Shakti Scheme and Bisoyi is credited for helming around 100. She was the secretary of the women’s SHG collective in Aska block. All the SHGs inspired by her spread the message of forest protection, women empowerment, girl child education, sanitation, cleanliness, menstrual hygiene and safe motherhood.

“When the women SHG movement took place in Odisha, a few of this kind of women have changed the socio-economic landscape of the state. SHGs have liberated many from private money lenders’ clutches and helped them grow economically, said climate and water expert Ranjan Panda, who closely observes the social issues in rural and urban pockets of the state.

“I visited all the 27 panchayats in Aska block and mobilised women to form SHGs. They had never come out in public. They were ignorant of even counting money. Gradually, they came out, learnt numbers and alphabets and contributed to family’s financial issues,” Bisoyi said.

“It is important to encourage the women who work at the grassroots level if we really want women empowerment,” she had said in her first speech as the Member of Parliament in June 2019 while urging the Centre to raise the salary of Anganwadi and ASHA workers. In the Winter Session, she sought to know the measures taken by the Centre in this regard.

The article was first published in Mongabay India