Ancient Wisdom: Lessons from the Amazon Forest in Ecuador

We tend to think of population in terms of human beings. Mumbai, for instance, is home to about 22 million people that live in skyscrapers, houses, shanties, and on the streets of the bustling metropolis. It is spread over 603 square kilometres and is one of the most densely populated cities in the world.

One square kilometre of the Amazon forest supports as many living creatures, that live in its soaring canopies, marshes, ferns, and rhizosphere. The sheer volume of life here is staggering. There are prehistoric predators like the caiman that cruise its riverine waters, flocks of parakeets and macaws fill the skies at dawn and dusk, and troops of primates swing from vines that are hundreds of feet from the ground.

This is a forest of mythic proportions. It stretches across nine countries in South America—from Brazil in the east of the continent to parts of Venezuela in the northwest—and packs in the greatest diversity of flora and fauna on the planet. But the Amazon rainforest is home to indigenous communities too, that have been fighting spiritedly to save their Earth Mother, or Pachamama as they call her.

Among these tribes are the Sapara people of Ecuador who live in the Napo Valley of the Upper Amazon where the photos in this essay were taken. Like many indigenous communities across the world, the Sapara have a deep relationship with their habitat and harmony with nature is crucial to their way of life. They consider all life equal, from the tiny tadpole to the mighty anaconda, and have been fighting against oil drilling in their piece of the Amazon for many years now. It is largely thanks to their efforts and that parts of the Ecuadorian Amazon remain intact.

Their message is simple. Instead of viewing the forest as a resource for energy, we might look to the Amazon as a source of wisdom. It is after all, a self-sustaining system than has thrived for millions of years. By observing its web of life, understanding the relationships between its inhabitants, and reconsidering our own systems, we can learn a great deal about how to live healthy, sustainable lives, wherever in the world we are.

The Napo valley of Ecuador is fed by the Napo River, one of the many tributaries of the Amazon. It snakes through the rainforest, giving life to the jungles and its inhabitants, and is an important mode of transportation through the region.

The waters of the Napo are home to a number of species, including the caiman (top) and the yellow spotted river turtle (bottom). Caimans are fierce hunters, and intelligent parents. Females lay eggs in carefully collected piles of vegetation and soil. As the organic material breaks down, it generates heat—like in a compost pile—which keeps the eggs warm.

In a place like the Amazon, predators lurk around every corner and home security is crucial to survival. Some animals tackle the issue with camouflaged nests, while others create mutually beneficial relationships to ensure safety. The tarantula spider for instance, shares its burrow with the tiny humming frog. The frog eats ants that enter the burrow to eat the spider’s eggs; in return, the tarantula keeps the frog safe from predators.

Up in the canopy, the world is more green than brown. Food is plentiful in these old forests, and there are plenty of berries, fruit and nuts, for the birds to eat. Dusk skies in the Napo valley are often coloured by flocks of mealy Amazon birds (top), a gentle and playful species from the parrot family. Occasionally, one might also hear the call of the white-tailed trogon, which enjoys snacking on both fruit, and small, juicy caterpillars.

Sometimes however, it’s not fruit or bugs that birds crave. Scarlet macaws (top) and parakeets (below) sometimes gather in large groups at mud springs to lick clay. Scientists believe the birds do this to consume salt, which is rarely found in the Amazon basin. 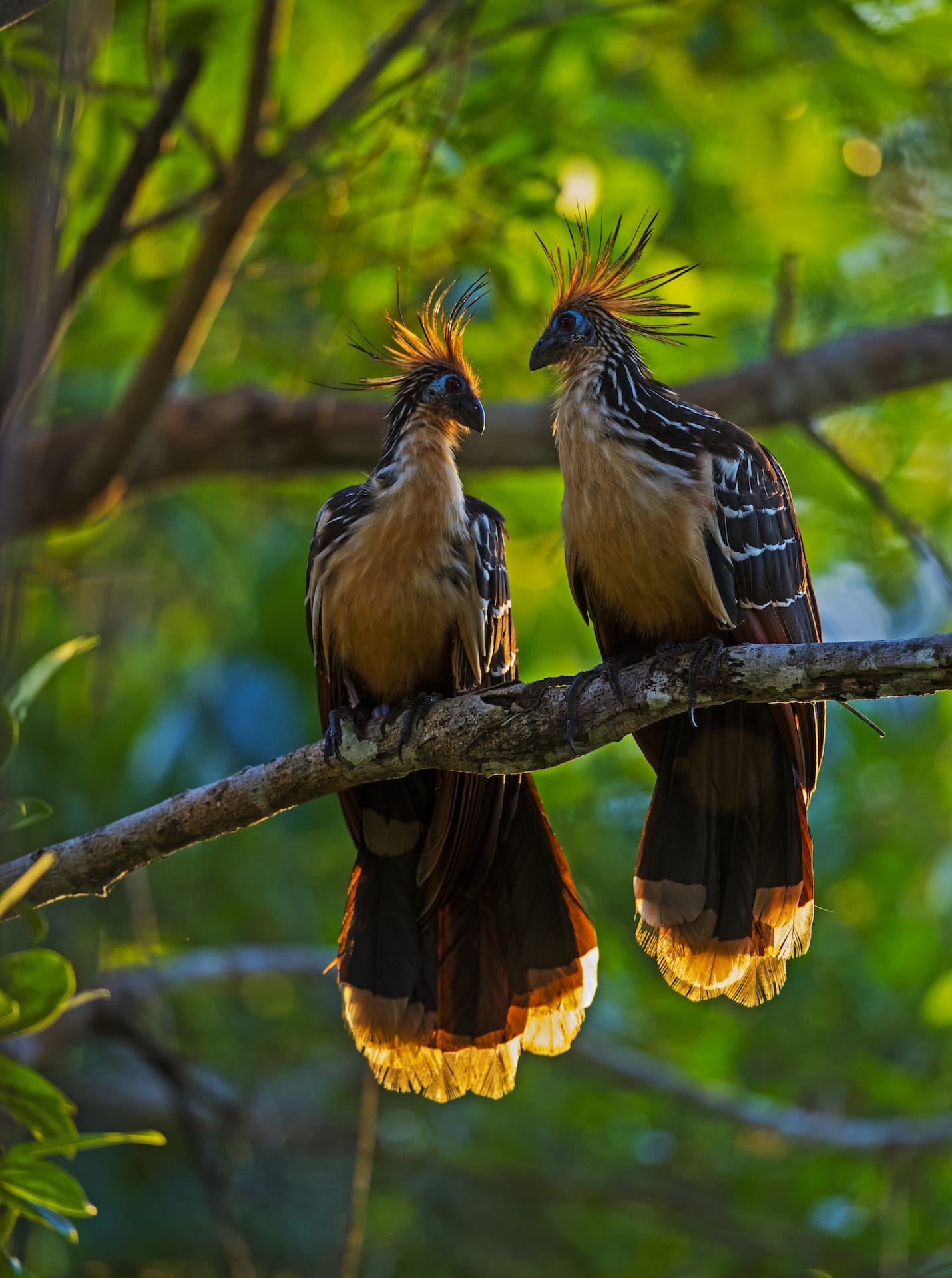 Hoatzins are considered the pruners of the forest canopy. They survive on a diet of leaves, much like bovine animals, and sped their days eating greens, digesting food, and spreading their nutrient-rich poop across the floor. Curiously, hoatzin chicks are born with claws at the end of their wings, which they use to climb up to their nests if they fall.

The forest is home to a number of primates, but their numbers are dropping dramatically. Among these is the pygmy marmoset (top), which is poached for the exotic pet industry. It is one of the smallest monkeys in the world: An adult can fit in the palm on your hand and weighs as much as a cricket ball. The capuchin monkey (bottom) is another species that has suffered due to habitat loss.

The Amazon never sleeps. When the sun sets, a different cast of characters come alive filling the forest with their calls and movements. Among them are potoos, a family of nocturnal birds that are known for their large eyes, and wailing cry. Sub-species include the great poto (top), common potoo (middle), and long-tailed potoo (botton). Potoos spend their day sleeping and staying very still, so they look like the branches of trees. 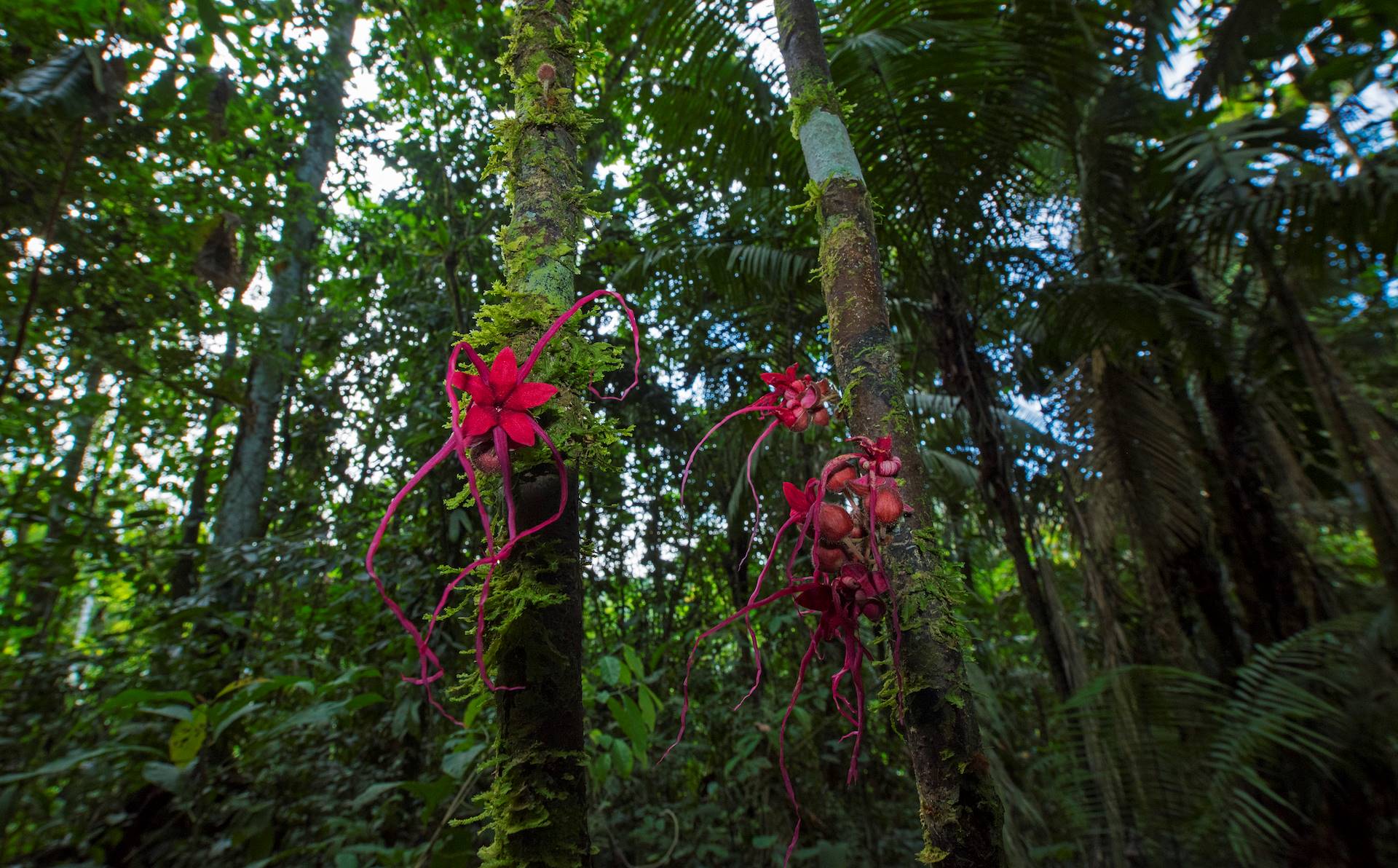 The flora of the Amazon is just as diverse, and competition for light and nutrition is fierce. Some trees grow tall to catch the sun’s rays, others like creepers climb up existing trunks, and a few species are parasitic, consuming the sap of healthy plants for their energy needs. It might seem brutal at times, but every species keeps its habitat in check, maintaining a careful balance that has lasted for thousands of years.