Arctic Summer: Where the Sun Never Sets and the Ice Doesn’t Thaw

The life and landscapes of the remote archipelago of Svalbard.

On a sunny Thursday in June 2016, Italian pianist and composer Ludovico Enaudi alighted a boat in the archipelago of Svalbard for the concert of a lifetime. The sun was out, winds were relatively tame, and his support crew were keen to make the most of the moderate weather. Breathing warmth into his naked palms, Enaudi jumped onto an inflatable boat and approached his stage: a slim, white pontoon with a black bench and a baby grand piano gleaming in the weak Arctic light. Hunks of ice floated by as he played, and a massive glacier formed the backdrop to his haunting performance. Enaudi’s piece was titled “Elegy for the Arctic”, and was meant to raise awareness of the fragile state of this ecosystem.

Frailty, however, is not what most people associate with Svalbard. Located between Norway and the North Pole, the cluster of islands is a habitat of ice and rock, beautiful and brutal in equal measure. This is a high-altitude desert, where the average summer temperature is about 3 degrees C, and the winter temperature hovers around -13 degrees C (on a good day).

Such an extreme environment may seem inhospitable, and yet, it is rich in diversity. Seabirds flock to Svalbard in thousands, filling the smaller islands with their cacophony. Families of seals and whales thrive in the waters off the coast, and on land, reindeer and arctic fox forage for food in the mountains and valleys. There is a human settlement too: a town called Longyearbin that proudly proclaims it is the northernmost township on the planet. It has about 2,000-odd residents who are all legally required to carry a firearm when venturing outside the town limits, to keep safe from the polar bears that call the island home.

It is these wild habitants of the Arctic Tundra that drew photographer Dhritiman Mukherjee here in June 2017, one year after Enaudi’s surreal piano concert. Over the course of ten days, Dhritiman explored the islands’ fjords, glaciers, and seas by boat and on foot. Some days brought clear skies and good animal sightings, and others, he says, brought waves over six metres high that “made our boat feel like a matchbox in the ocean.” 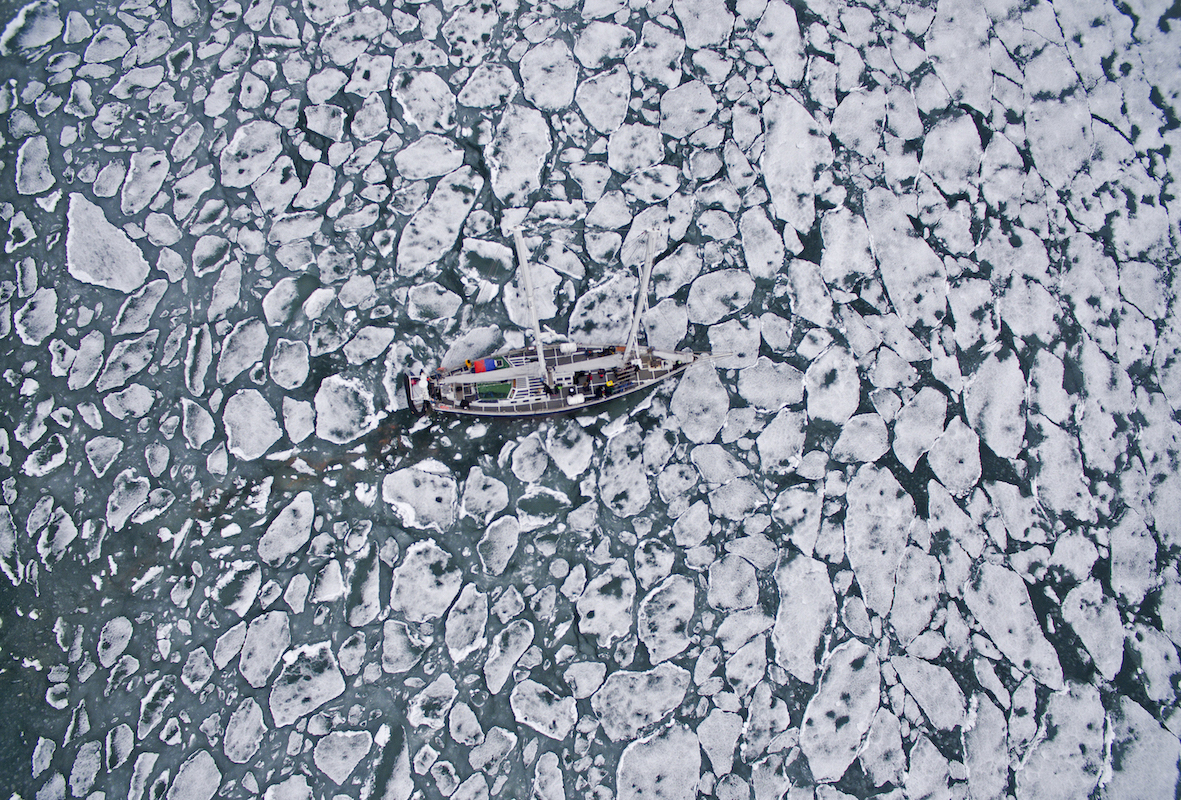 Summer in Svalbard extends from end-June to end-August. The sun remains perpetually above the horizon during this time, which means that there is no night. Photo: Dhritiman Mukherjee

Among the first large mammals he photographed was the Atlantic walrus, protected thanks to Svalbard’s strictly enforced rules against hunting. They might seem unwieldy to us, but walruses are supremely adapted to life in the Arctic. They use their tusks—which are actually large canines—to make holes in the ice, their sensitive whiskers are employed to find shellfish in the murky water, and they have layers of blubber that help survive the extreme cold of their habitat. Atlantic walruses are also extremely loud, and the bellowing of herds can be heard a great distance away. Photo: Dhritiman Mukherjee 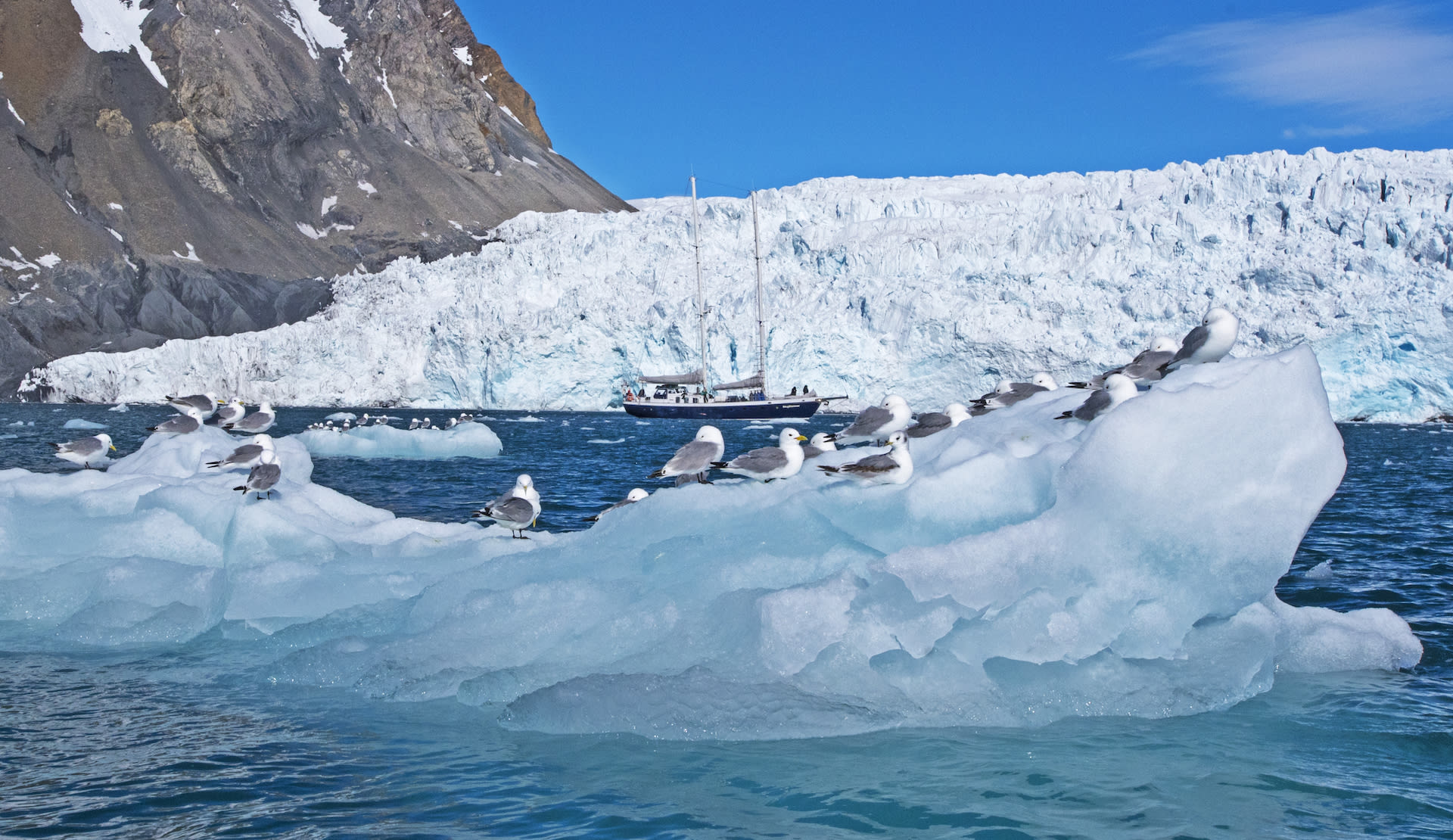 Small in size but just as noisy are the black-legged kittiwakes, named for their high-pitched “kittee-wa-aaake, kitte-wa-aaake” call. They are members of the gull family and live in gatherings that range from ten to ten thousand, some covering entire islands. Photo: Dhritiman Mukherjee

A number of seabirds in Svalbard, like the common guillemot, are migratory in nature. They arrive for the summer months and build nests in rocky cliffs and islands, where they breed and look after their young. Most species leave around September, when the polar night sets in. Photo: Dhritiman Mukherjee

The black guillemont is a close cousin. These little birds are also incredibly shy, and duck into the water at the slightest sign of danger (or photographers). They breed in smaller colonies, close to the coast. Photo: Dhritiman Mukherjee 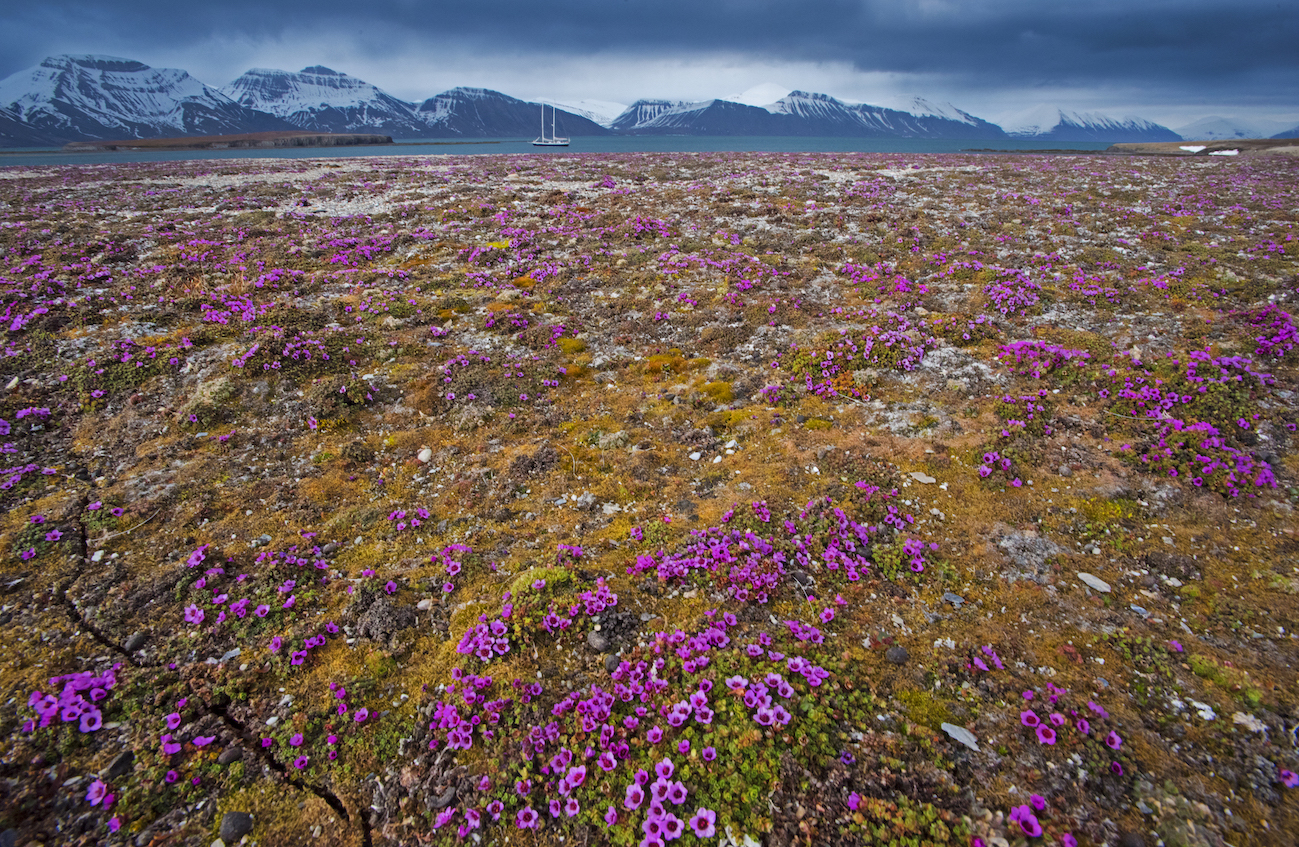 There are no trees in Svalbard. The plant species found here are herbaceous and grassy in nature, small in size, and grow largely in the summer months. Only ten percent of Svalbard thaws enough for vegetation to grow. The rest of the archipelago is covered in permafrost. Photo: Dhritiman Mukherjee

Living off the Tundra’s meagre vegetation is the Svalbard reindeer, endemic to the region. They are smaller than other reindeer species, and spend the summer months eating any and all available flora, halting only to take small naps. By doing this, the reindeer are able to build a layer of fat that helps them survive the winter months, when food is harden to come by. Photo: Dhritiman Mukherjee 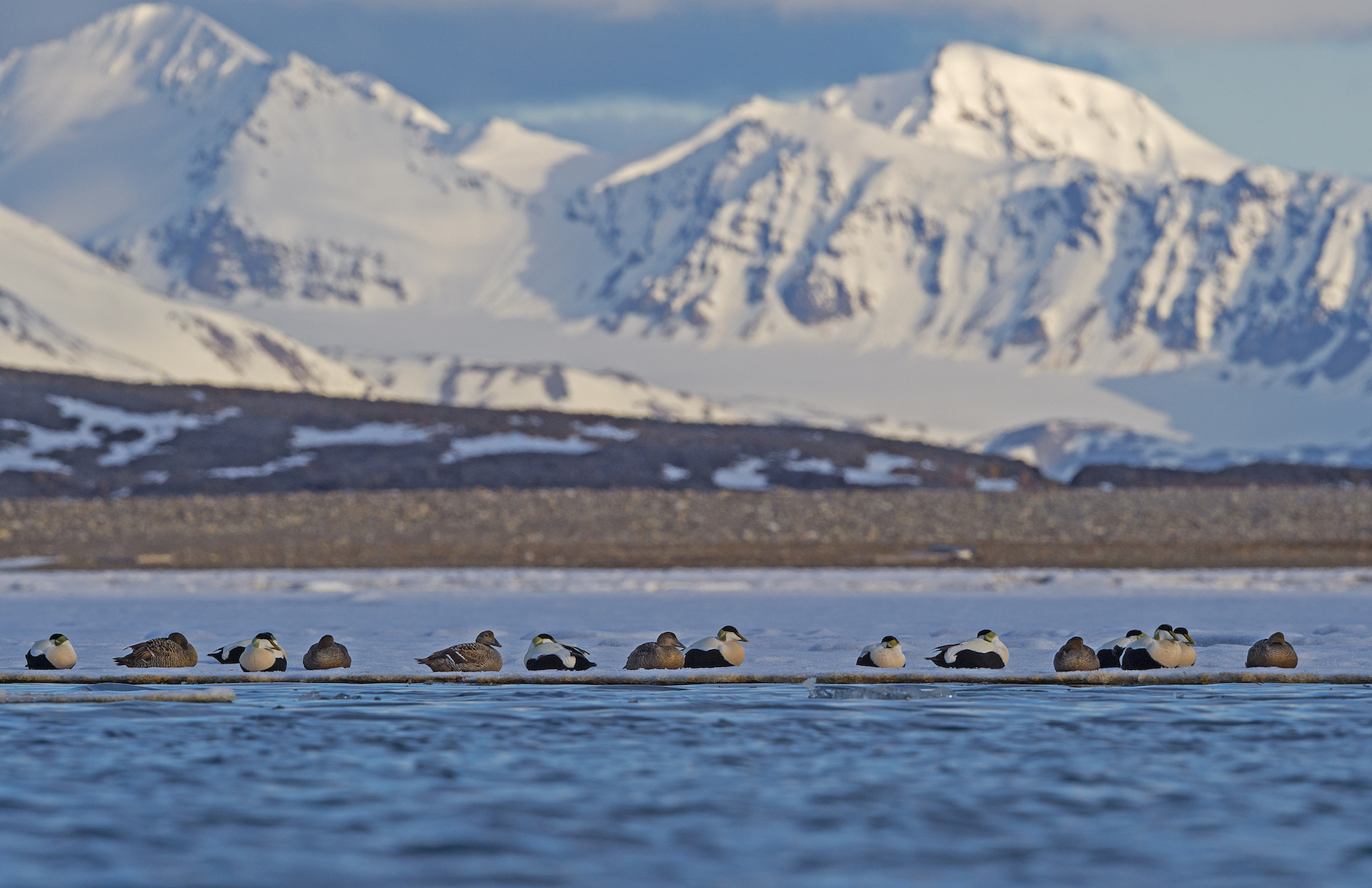 Marine ducks like the common eider live off crustaceans and mussels that thrive in the brisk waters of the Arctic. They breed in colonies, seeking safety in numbers from predators such as arctic foxes, even polar bears which have a fondness for their eggs. They are fairly common in this landscape. Photo: Dhritiman Mukherjee

The king eider is much harder to spot, and one of the most coveted bird sightings in Svalbard. They spend most of their life at sea, except during breeding season when they nest near freshwater lakes and ponds. They are skilled swimmers and can dive to depths of 50 metres while feeding. Photo: Dhritiman Mukherjee 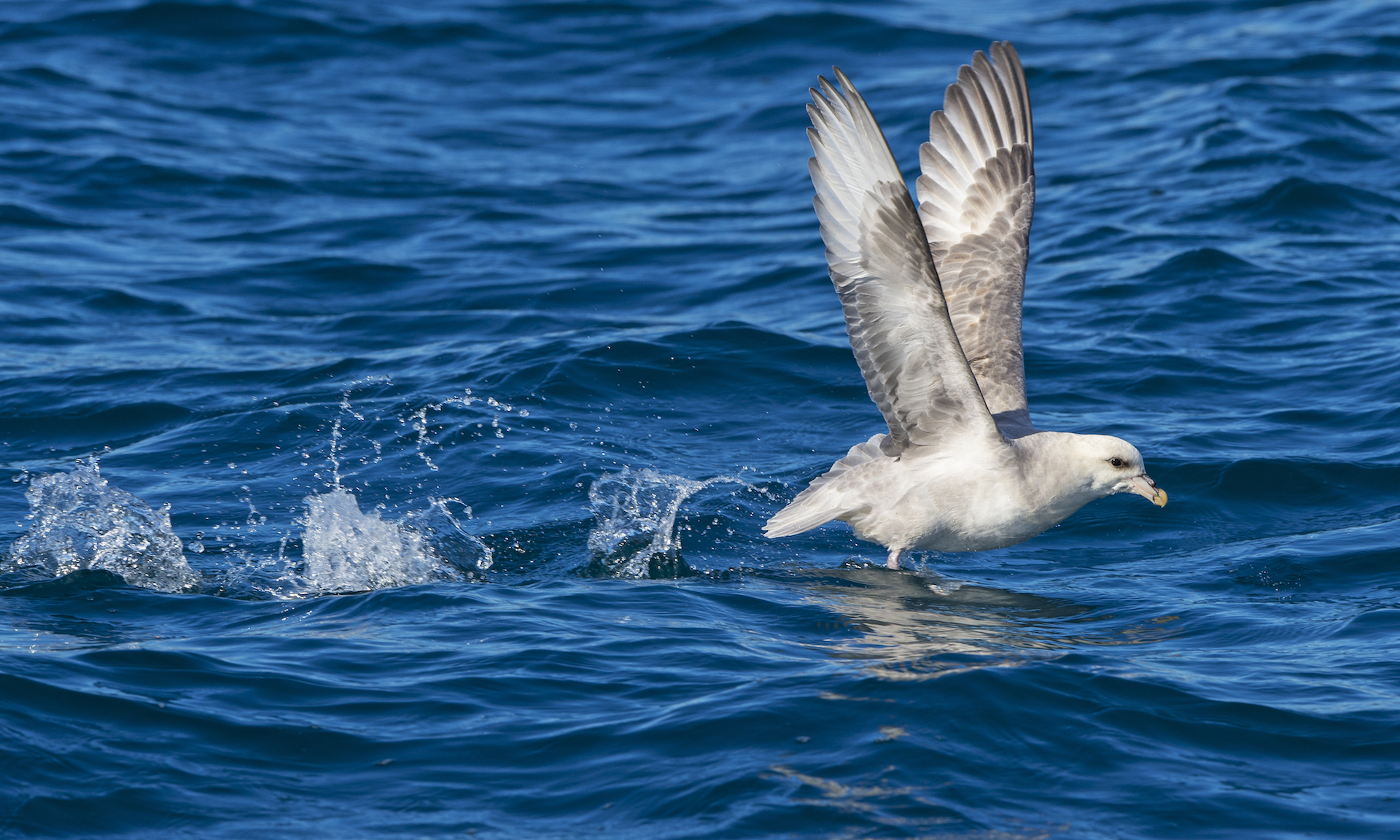 Northern Fulmars are opportunistic feeders, known to follow tourist boats in Svalbard, picking scrap food that might be tossed overboard, or hunting for fish in the wake of the water churned by the boat’s movement. Photo: Dhritiman Mukherjee

Where there are seabirds, seals are never too far away. The ringed seal, one of the many species that swims in these waters, is fast, agile, and stealthy, the bane of birds such as guillemots and eiders. When they aren’t in the water, ringed seals seek refuge on sheets of sea ice, which keeps them safe from predators such as orcas. Photo: Dhritiman Mukherjee 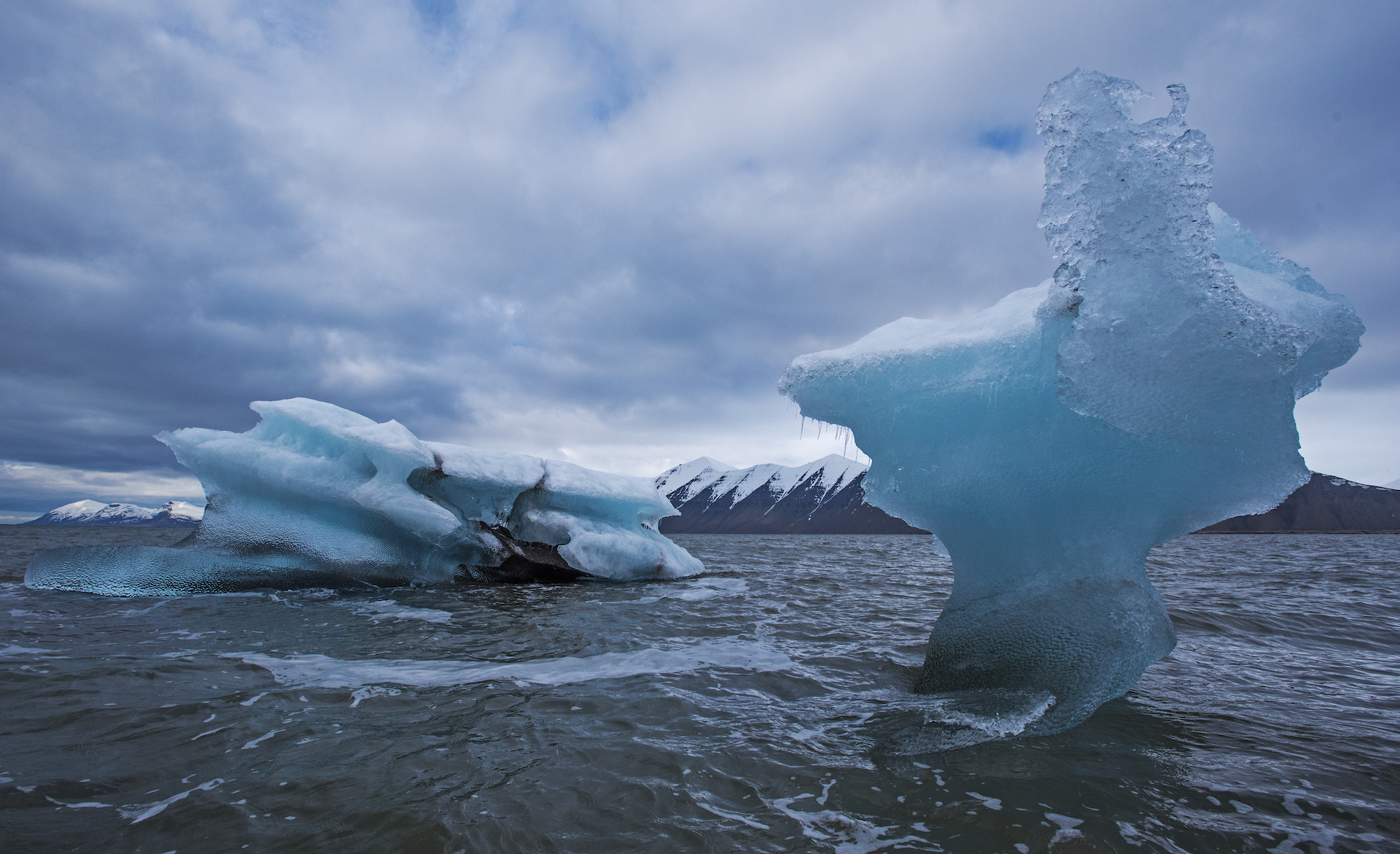 The average winter temperature in Svalbard has increased by nine degrees in the past few years—worrying in any habitat, but more so in one that is covered in ice. Glaciers and icebergs that have been frozen for centuries are melting, causing habitat loss for animals like the ringed seal, as well as impacting water levels across the planet. It remains to be seen how the wildlife (and humans) in the region will adapt to these changes. Photo: Dhritiman Mukherjee