The Dramatic Tale of the Greater Adjutant

The greater adjutant isn’t conventionally beautiful, what with its patchy head, scraggly appearance, and flaccid neck pouch. And yet, this lanky bird — the largest in the stork family — was once a celebrated part of the Victorian fashion world.

This was back in the late 1800s. The East India Company was thriving, Calcutta was a hotbed of activity, and feathers were all the rage among England’s society women (and by extension, in the white quarters of Calcutta too). The plumage of the young adjutant in particular, was held “in much esteem in France and England,” writes Emma Roberts in her book, Scenes and Characteristics of Hindostan (1895). Catching the birds was prohibited by law, which meant the feathers fetched a pretty price on the black market. Pretty enough for them to be worth shipping all the way to London where they were used to make slinky shoulder capes and feather boas. “Excepting the heron’s,” Roberts writes in her book, “there are no other Indian plumes so highly prized as an article of commerce.”

Ironically, the same birds were considered pretty unhygienic by the residents of Kolkata, as they spent much of their time near garbage dumps on the outskirts of the city. This is because the greater adjutant is a scavenger, like the vulture, and subsists on carrion and other waste. Where there are humans, they quickly learned, there is plenty of waste. In fact, a number of paintings from the British era depict the birds circling above the city, or perched by the side of the road, or on rooftops. Some accounts say, there was a stork for every house. 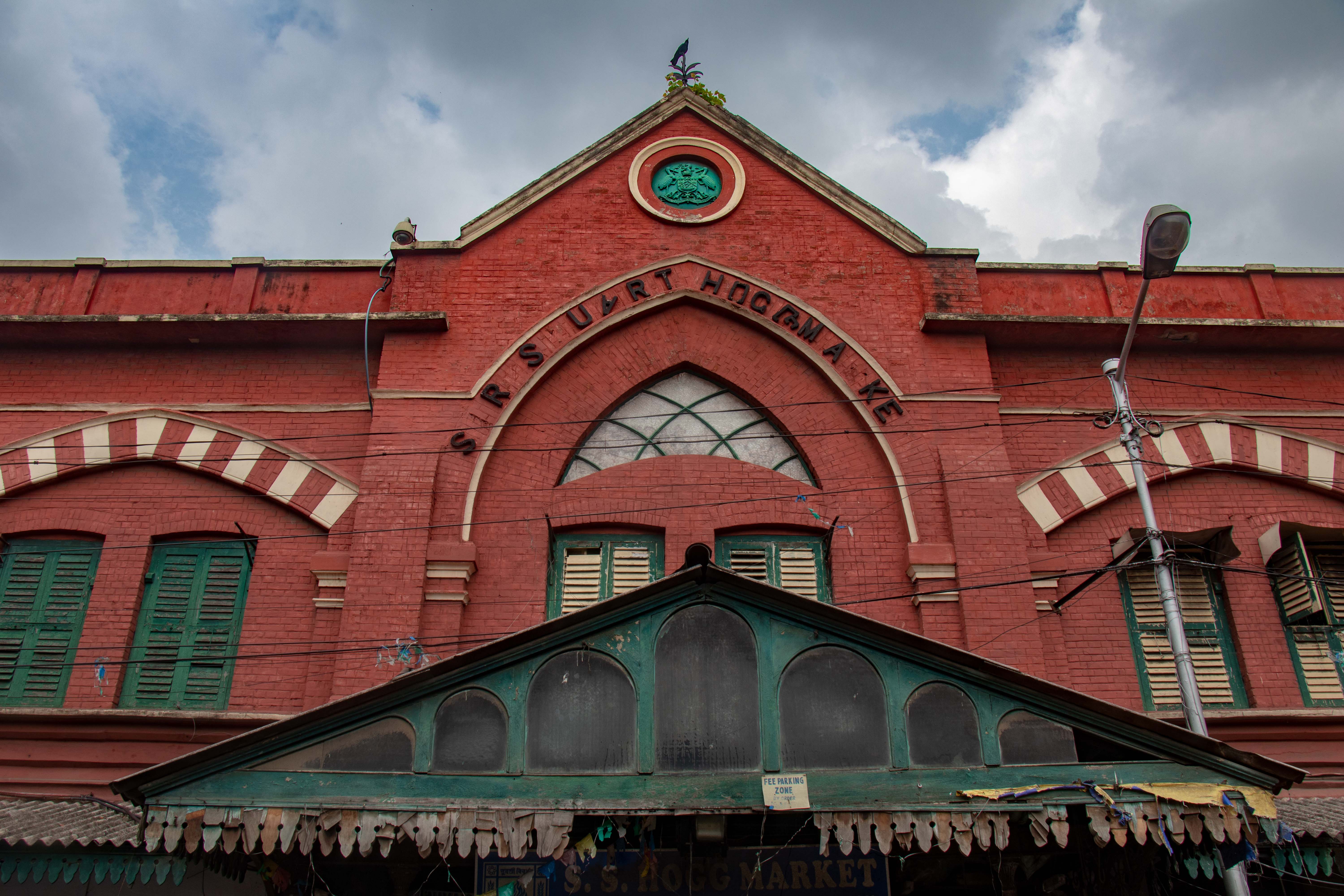 Today, the only greater adjutants in Kolkata are part of insignia, like this circular crest that adorns one of the entrances to New Market. The English called the bird the “Calcutta adjutant” for its ubiquity; the locals christened them hadgila (haad = bones, gila = swallower) for their ability to consume carcasses, bones and all. Photo: Masudur Rahim Rubai

A closer look at the emblem reveals the British crown and two storks with serpents in their beaks. This was the coat of arms awarded to the Calcutta Municipal Corporation under English rule. It is unclear whether the bird was chosen for its role in waste management or simply because they were everywhere. The same crest also marks a wrought-iron gate on Kolkata’s Alimuddin Street, near the Municipal Office. Photos: Masudur Rahim Rubai

To see them in the flesh, a trip to Assam or Bihar is in order. These are the only two states in the country that have active breeding populations of this endangered bird. In Assam, flocks of these statuesque birds have been seen in the vicinity of Deepor Beel, a shallow, freshwater lake near Guwahati. In Bihar they have been reported in the village of Kadwa Kosi Diara, where the bird is referred to as Garuda, the mythical steed of Vishnu. Photos: Dhritiman Mukherjee 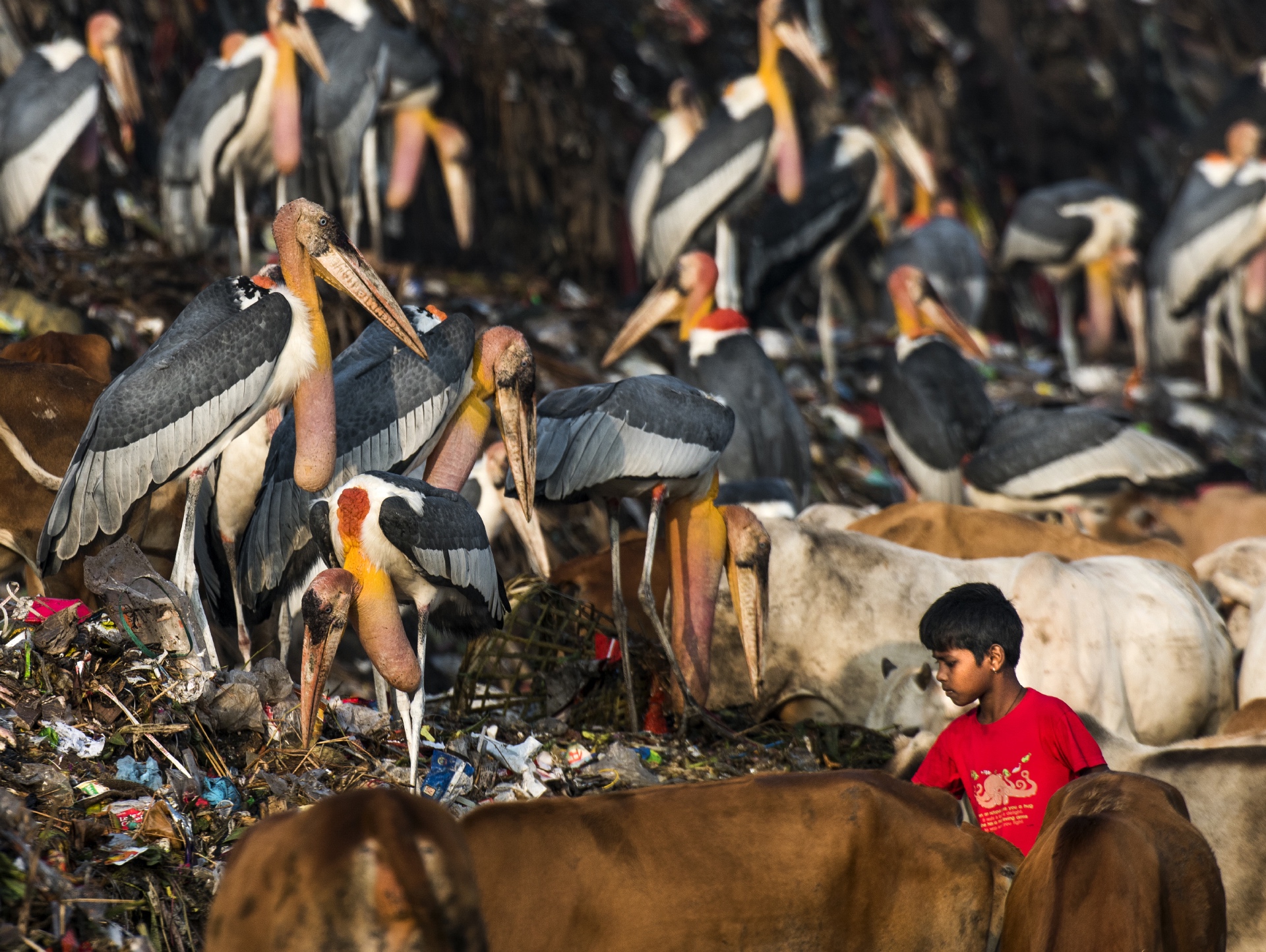 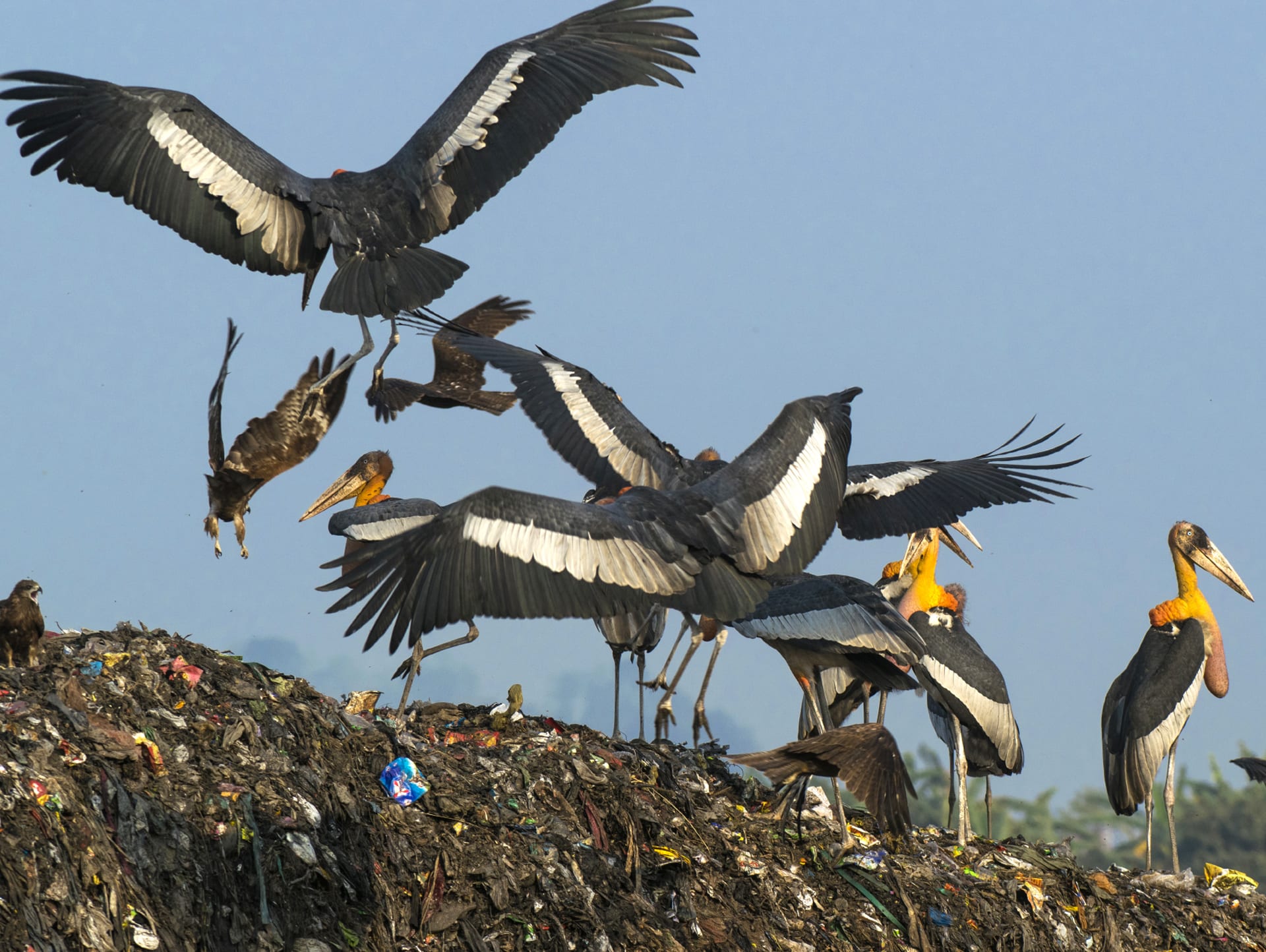 The best places to see them however, remain the garbage dump, like this hillside of trash near Guwahati’s Deepor Beel. The storks visit regularly, along with other scavengers (and circumstantial scavengers) such as crows, cows, rats, even eagles, and can be found sorting through trash for scraps of meat and vegetal waste. While their numbers are heartening, their condition is far from hopeful. Photos: Udayan Borthakur

Its scavenger status is one of the reasons that the greater adjutant has a reputation for being unhygienic and a carrier of disease. In residential areas people have been known to torch their nests, even cut down trees where the birds roost, leading to a loss of life. Photo: Dhritiman Mukherjee 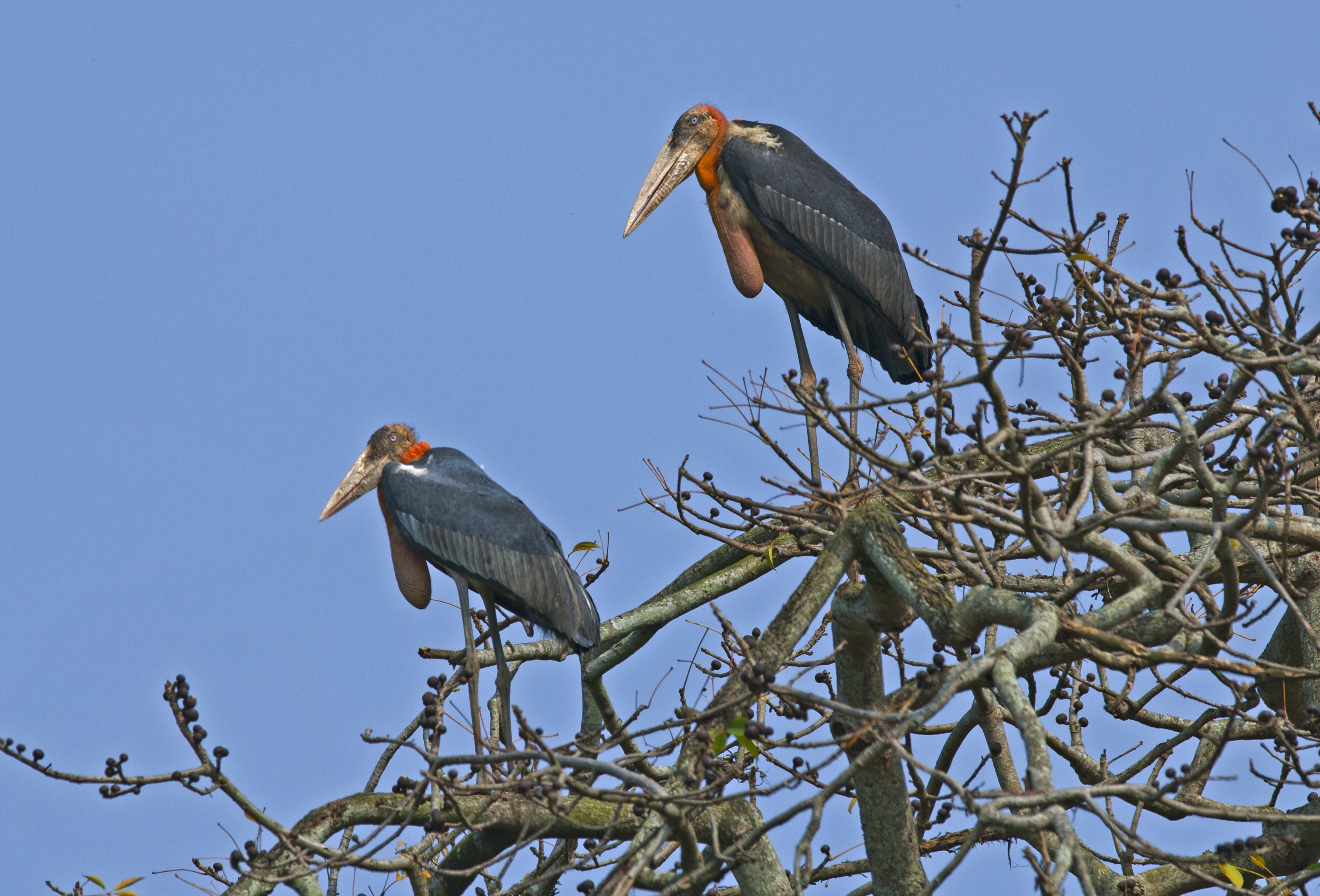 Thankfully, all is not lost. Due to conservation efforts by the Hargila Army in Assam and the Mandar Nature Club in Bihar, the narrative around this harmless bird is changing, from being a source of irritation to one of pride. Weavers from the villages have even started including motifs of the greater adjutant in handloom saris and scarves, as a way to draw attention and awareness to the species. In full circle, the hargila is back in style. Except this time, no birds were harmed in the making of the merchandise. Photo: Dhritiman Mukherjee