Saurabh Sawant still remembers those childhood summer trips to Vengurla, when he would visit his grandparents. He’d leave the house in the morning and spend the hours until lunch picking up rocks, checking leaf litter, and observing puddles with grave concentration. All in the hope of finding a colourful frog or a school of darting tadpoles. It was a time of exploration and wonder, when every day brought new surprises and delights.

Twenty years later, Saurabh is now a naturalist, wildlife photographer, and filmmaker, with a keen interest in the conservation and research of amphibians and reptiles (collectively called herpetofauna). He still spends his time examining leaf litter and puddles, but he’s now a lot better at finding frogs. “They really fascinate me, because there’s so much we don’t know about them,” he says on a phone interview. “They are so ancient, so fragile, and yet, so adaptable.”

Sawant is among a growing breed of herpetologist-photographers in India, who are studying and spreading awareness about this oft-ignored branch of zoology. Broadly speaking, herpetology is the study of amphibians and reptiles, including snakes, frogs, lizards, crocodiles, and turtles, among many other species.

Within this area of study, there are further specifications. Some herpetologists focus on taxonomy and classification, others on toxicology (study of venom and anti-venom), or behavioural science, or deep habitat study. Goa-based Nirmal Kulkarni marries hard-core scientific research with field conservation by conducting herpetology expeditions in areas like the Western Ghats and Northeast India. Participants are drawn to these trips for the photography, but receive instruction on subjects ranging from snake bite protocol to the Wildlife Protection Act of India. “Reptile photography is a growing trend, so why not use this momentum to the advantage of research,” he says. “The idea is to go beyond taking pictures and snake handling. To train participants to gather field information, make reports, contribute to a larger cause.”

Wildlife photography mentor Shreeram MV focuses on documenting herpetofauna and their behaviour. Shreeram has photographed landscapes ranging from the high-altitude deserts of the Trans-Himalayas to the ecosystems of the Andaman and Nicobar Islands. Like the other stewards of wildlife mentioned in this story, he believes we have a long way to go before we arrive at a comprehensive list of reptiles and amphibians in the Western Ghats. “And I believe that it is important for us to showcase our natural heritage through photography.”

Spend enough time immersed in nature, as these photographers do, and it becomes impossible to ignore the web of life, and the million ways in which we are all connected. Every species in an ecosystem has a role to play, from the fierce tiger to little frogs and tadpoles. “My role is to bring attention and awareness to those species that are largely ignored,” says Dhritiman Mukherjee, a wildlife photographer with a staggering portfolio of India’s fauna. “The thing is, every creature, no matter how big or small, has its own routine, function, and peculiar behaviours. They are all interesting. They are all important. All I do, is witness them,” he says.

Frogs are a fascinating and diverse order of amphibians and wonderful indicators of the health of their habitat. “They breathe through their skin, and are therefore, directly related to both air and water,” explains Saurabh Sawant. “This also makes them incredibly sensitive to their surroundings.” To find frogs in the wild, Saurabh says, it is important to listen more than look. “Once I hear the call of a target species, I try to echolocate the frog.” This small gliding frog (above), perched on a blade of grass, was photographed in Wayanad, and is endemic to the Western Ghats. It is smaller in size than the Malabar gliding frog (top), identified by its red webbing. Photos: Saurabh Sawant 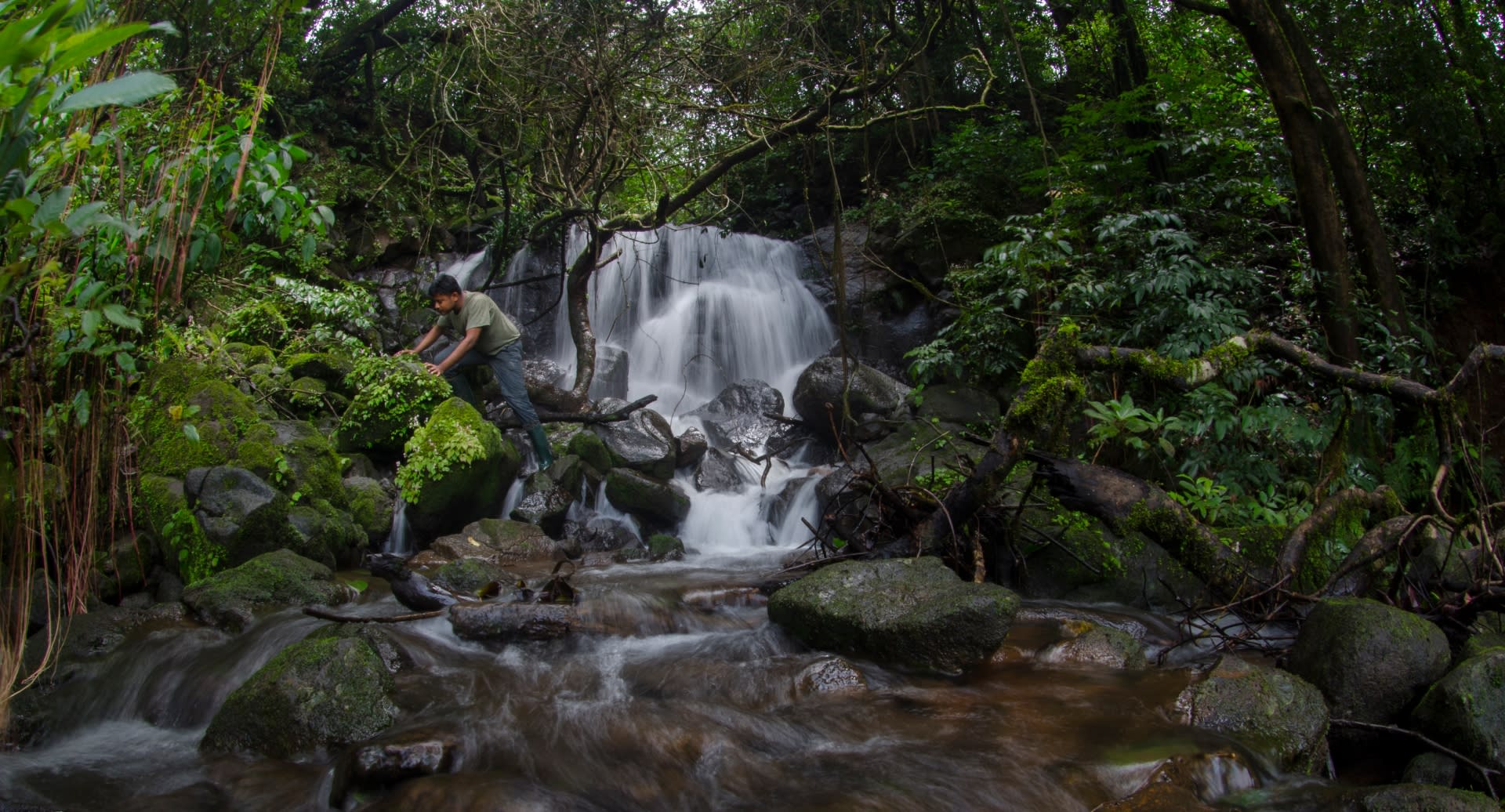 Amboli in the Western Ghats of Mahrashtra is one of Saurabh’s favourite spots for observing herpetofauna. Here he is looking for frogs and endemic freshwater crabs. “A number of frog species build foam nests over puddles of water that harden in the air,” he explains. “When the eggs hatch, the foam disintegrates, and the tadpoles fall into the water.” Photo: Saurabh Sawant

Look close enough, and you might spot a cluster of eggs, like the spawn of the Indirana leaping frog (top), taken in Mullayangiri. “This species is usually found in rocky crevices on the ground, as they are terrestrial,” explains Saurabh. The tadpole (above) is a specimen of the ornate, narrow-mouthed frog. As an adult, it is small, loud, and generally found in roadside tunnels and tanks. It is beautifully coloured, even as a tadpole. Photos: Saurabh Sawant 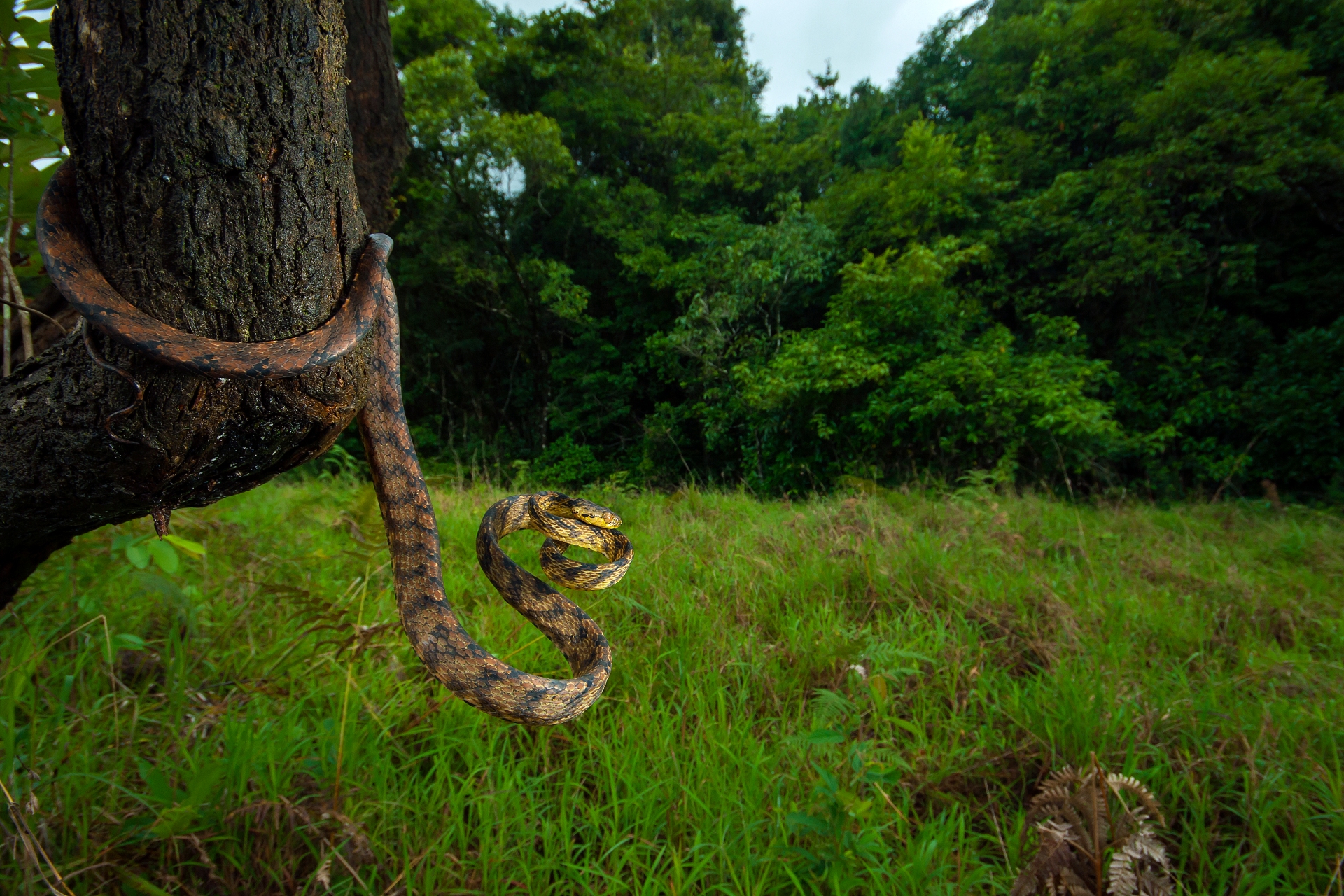 Saurabh might be self-confessed ‘frog guy’ but ‘snakes are always exciting,’ he says. This boiga, commonly called a cat-eyed snake for its vertical pupils, similar to felines, was photographed in Kudremukh Tiger Reserve, Karnataka. Like many arboreal snakes, it has a long, thin body, adapted to wrap around branches and tree trunks. Photo: Saurabh Sawant

Herpetologist Nirmal Kulkarni (crouched on the left) spends much of his time finding new areas of biological interest and doing rapid diversity surveys. “We find areas where conservation is needed,” he says. Nirmal is examining a saw-scaled viper under a rock in Goa’s Chorla Ghats. Saw-scaled vipers are small snakes, easy to miss, and quite temperamental. Under duress, they rub their scales together, creating a sound similar to a saw cutting wood. Photo: Adithi Muralidhar

Nirmal has a soft spot for snakes, especially the Malabar pit vipers. He has been studying the species for many years in the Mhadei Wildlife Sanctuary in Goa, and conducts pit viper expeditions to train amateur herpetologists in understanding the snake and its habitat. Malabar Pit vipers have a well-defined home range, and are known to hang out in the same spot for years, if left undisturbed. They particularly like being near water, ideally basking on a sunny rock. Nirmal photographed this female, and her praying mantis friend in Mhadei. “Almost every day, we would see this praying mantis sitting on the snake,” he recalls. Photo: Nirmal Kulkarni

The Chorla Ghats thrums with life, both large and small. Among its herp inhabitants are Forsten’s cat snake (top) and the Roux calotes lizard (above). The snake is arboreal, nocturnal, and mildly venomous, and feeds on birds and bats, while the lizard keeps the forest’s immense insect population in check. Photos: Nirmal Kulkarni 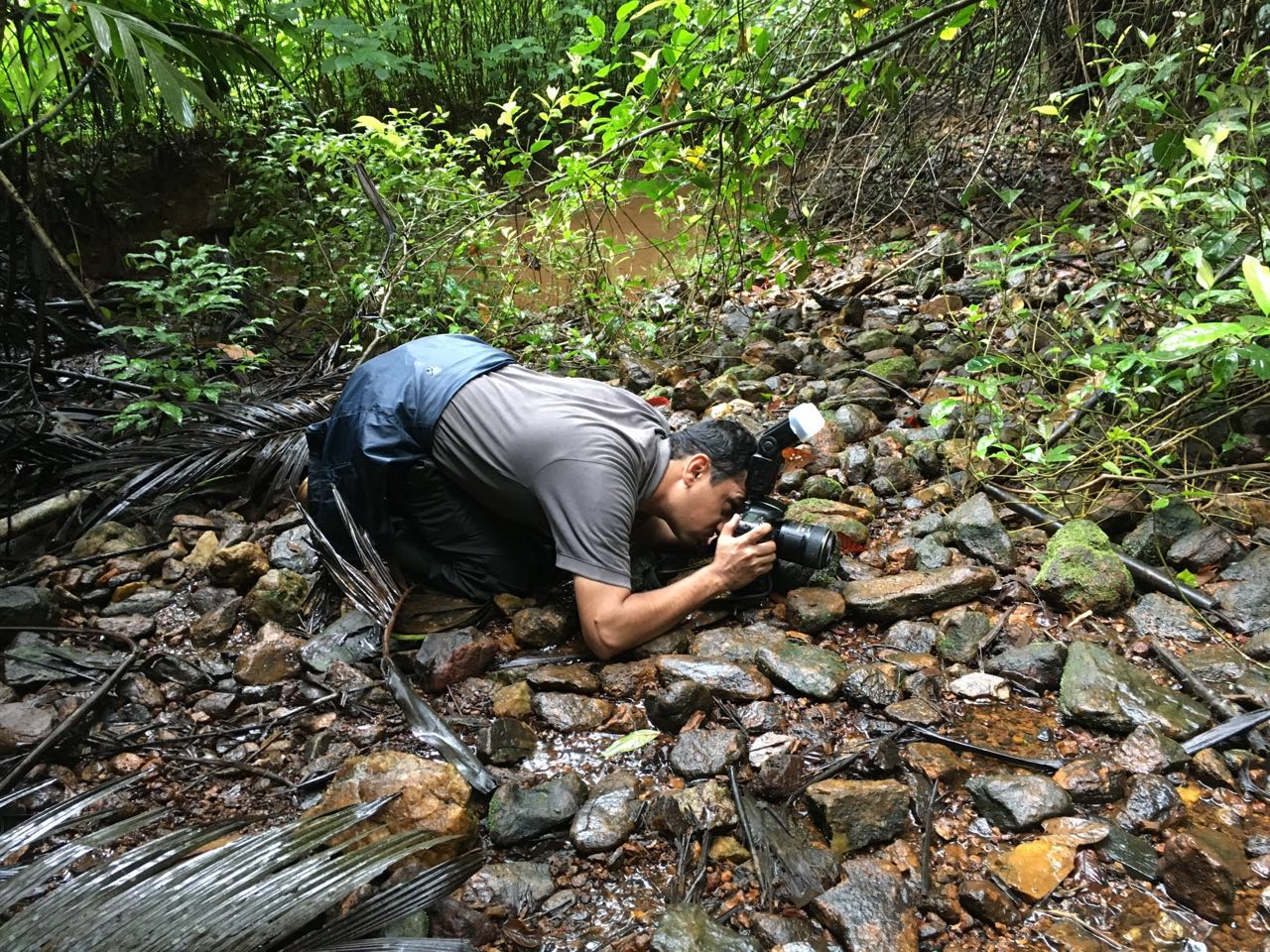 Shreeram MV believes that photography in the rainforest presents a variety of challenges. For one, every layer of the rainforest — from the forest floor to the canopy — is teeming with life. “Much of it, like the tiny dancing frog that I’m photographing here, prefers very specific habitats,” he wrote in an email interview. “Dancing Frogs love streams and to get a good photograph, it is very important to go down to the frog’s level.” Shreeram has conducted photography expeditions to various habitats across the world, though Agumbe in Karnataka remains a favourite for two reasons: The wildlife encounter rate is very high, and there’s something new to learn every single time. Photo: Shreeram MV

This is a Kottigehara dancing frog, a critically endangered species that is endemic to streams in the Western Ghats. “I wanted to capture the frog in its natural habitat, with a stream in the background,” explains Shreeram. “Since I don’t handle frogs while photographing them (for ethical reasons), it took me a couple of days to get this photograph of the amphibian on this lovely rock. Frogs have porous skin and any chemicals, or pathogens on your hand can get transferred to them very easily.” Photo: Shreeram MV

Monsoon is the best time to observe herpetofauna, as they are more active during this season. However, it is important to maintain a respectable distance, especially when photographing snakes like this Malabar pit viper from Agumbe. “I wanted to capture the essence of the snake and its nocturnal world in this photograph,” says Shreeram. “I used a torch to paint the snake, keeping the rest of the habitat in the dark. It’s quite a challenge to locate them in the day as they blend into the forest, coiled up on a leafy branch, or root somewhere.” Photo: Shreeram MV

While taking photographs, Shreeram follows one simple rule: The animal is more important than the photograph. “It is important to respect the animal’s space and not stress it out during photography,” he emphasizes. “Sometimes, maintaining your distance results in more interesting photographs like this vine snake feeding on a leaping frog.” Vine snakes are expert camouflagers, nearly indistinguishable from a leaf in the rainforest. “The frog put up quite a fight, eventually succumbing to the persistence of the snake,” the photographer recalls. “This is close to the last gulp, with a drop of the frog’s blood dripping down its legs.” Photo: Shreeram MV 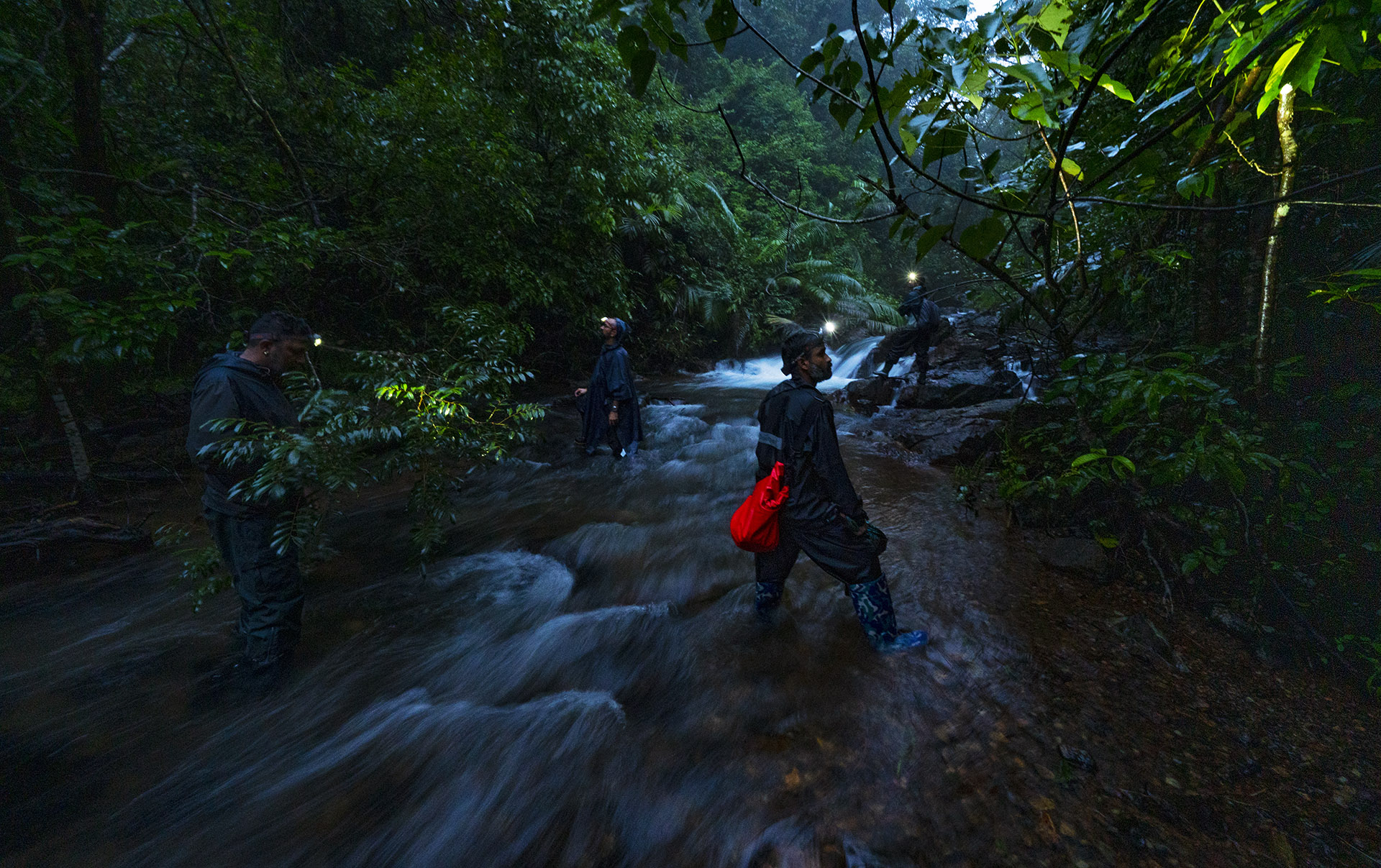 Wildlife photographer Dhritiman Mukherjee relies on the experience and knowledge of trained herpetologists on his expeditions. He photographs herpetofauna for scientific study and conservation, which means “I can’t be biased,” he explained. “I have a responsibility to photograph the species with rigour, and care. It can be tempting to intervene sometimes, and maybe it might yield a better phtograph, but that defeats the purpose.” Sirsi in Karnataka is a favourite for herpetofauna in the Western Ghats, especially in the monsoon when streams and waterfalls abound. Photo: Dhritiman Mukherjee

Caecilians are among the lesser-known members of the herpetofauna family. Found among leaf litter and top soil, these limbless amphibians look like a cross between a snake and a worm, and are rarely seen, let alone photographed. Dhritiman photographed this specimen at night, near Sirsi, Karnataka. Photo: Dhritiman Mukherjee

Often heard, but rarely seen, the wrinkled frog is another curious inhabitant of the Western Ghats. These small but loud amphibians lay their marbled eggs on leaves above streams, so when the eggs hatch, the tadpoles fall into the water, where they can find food. This image was taken in Amboli, during the monsoon. Photo: Dhritiman Mukherjee