Giants of the Caribbean: Face-to-face with American Crocodiles

The shallow lagoons and mangrove forests of the Banco Chinchorro atoll reef, off the coast of Mexico, host one of the most genetically pure populations of the reptiles

Waking up in the middle of the night to use the loo, I wandered outside drawn by the magical moonlight. Standing at the edge of the stilted cottage in which I was staying, I could see the moon’s rays glinting off the gentle waves. And among the wavering shadows in the water was a crocodile resting in the shallows.

There are times and places when even the most mundane of acts become amazing. During my visit to Banco Chinchorro atoll reef, located 35 km off Mexico’s coast in the Caribbean Sea, a loo visit resulted in an unexpected and memorable photo.

Part of the Mesoamerican Reef – the largest reef in the western hemisphere stretching nearly 1125 km – Banco Chinchorro is a hotspot for marine diversity and a prime tourist destination. Designated a biosphere reserve in 1996, the reef has three major islands: Cayo Norte, Cayo Centro, or Caya Lobos, which also has an American crocodile reserve. The two main access points to it are the towns of Xcalak and Majahual on the Mexican mainland.

The waters teem with tropical marine life, with lots of coral and colourful species like groupers, sergeant majors, angelfish and more. There are also lobsters and stingrays, reef and nurse sharks, and turtles that attract divers and snorkellers alike. The area’s year-long pleasant temperature means that there are tourists here around the calendar.

But what brought me here was the American crocodiles that make their home in the shallow lagoons and mangrove forests surrounding the atoll. Numbering about 400-500 individuals, this population is distinctive for its genetic purity. Normally quite shy, the crocodiles are hard to photograph in their natural habitat. However, they often wander to the shallow waters a short distance offshore where fishermen build their stilt huts (since private construction on the island is not allowed) in search of easy food like fish offal. It was one such hut amongst a small cluster that I stayed in for five nights, to capture these images. Out in the open, away from their comfort zone, the crocodiles are more tentative, less aggressive, making it possible to photograph them. Even so, I had to be very careful.

Fishermen stay in small clusters of stilt huts a short distance from the reef. The fishing village I stayed at was located on the southwestern end of Cayo Centro. 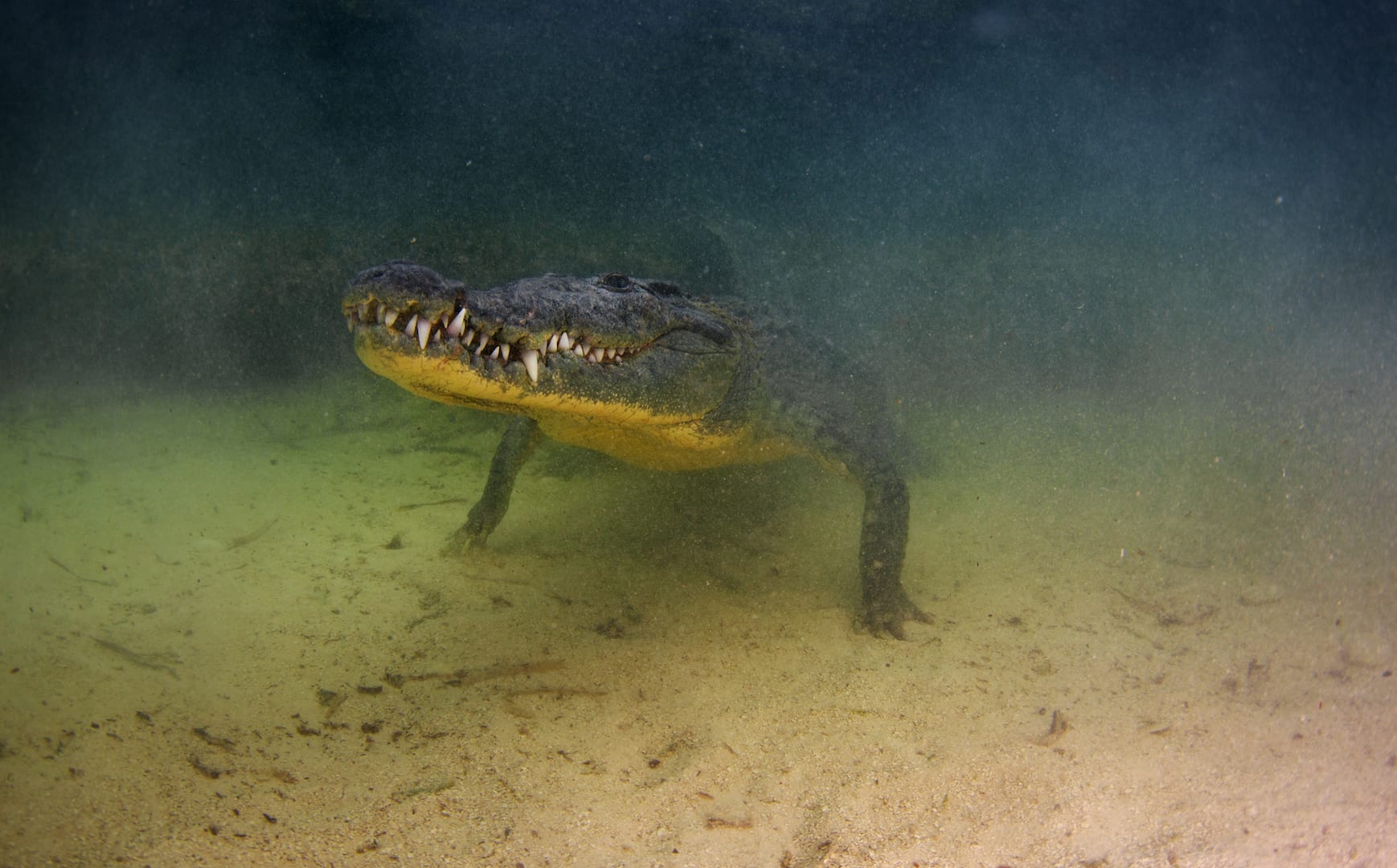 American crocodiles are found all the way from south Florida, at the northern extreme of the animal’s range, all the way down to the Pacific coast of South America. The population at Banco Chinchorro is considered among the healthiest and most genetically pure.

Shaped like giant lizards, American crocodiles have long and muscular tails that they use like propellers. They have four short legs, with five toes on the front feet and four at the back. Adult crocodiles are greyish-green on top, and whitish-yellow underneath.

American crocodiles love to bask in the sun because they need external sources of heat to stay warm. The nostrils, eyes and ear drums are located on the top of their long snouts, allowing them to stay immersed in water with just the top of the head exposed. 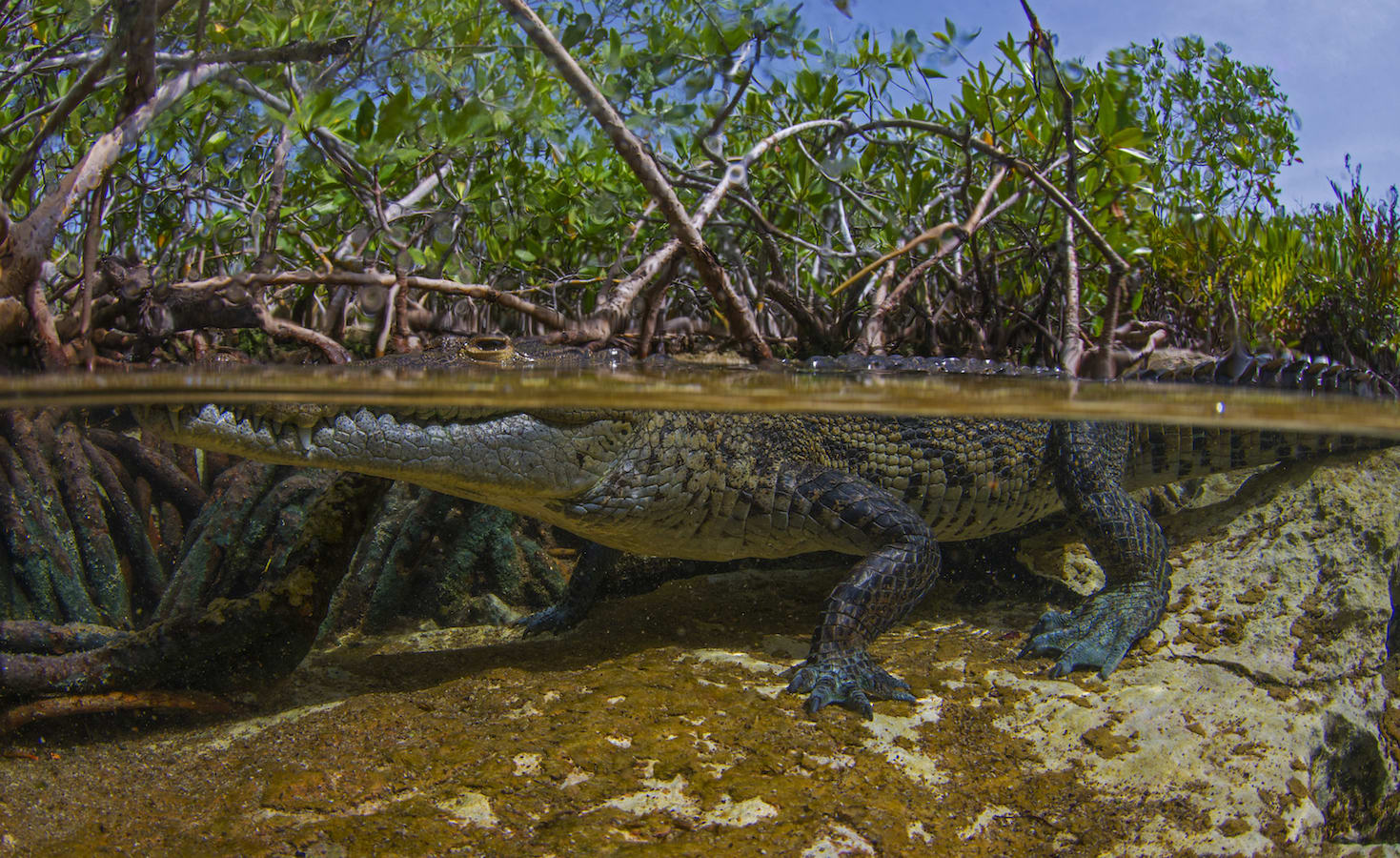 In their natural habitats crocodiles are quite secretive and even aggressive, and therefore hard to approach. I managed to get this shot rather unexpectedly when I came across this croc while diving in the cenotes near Cancun. 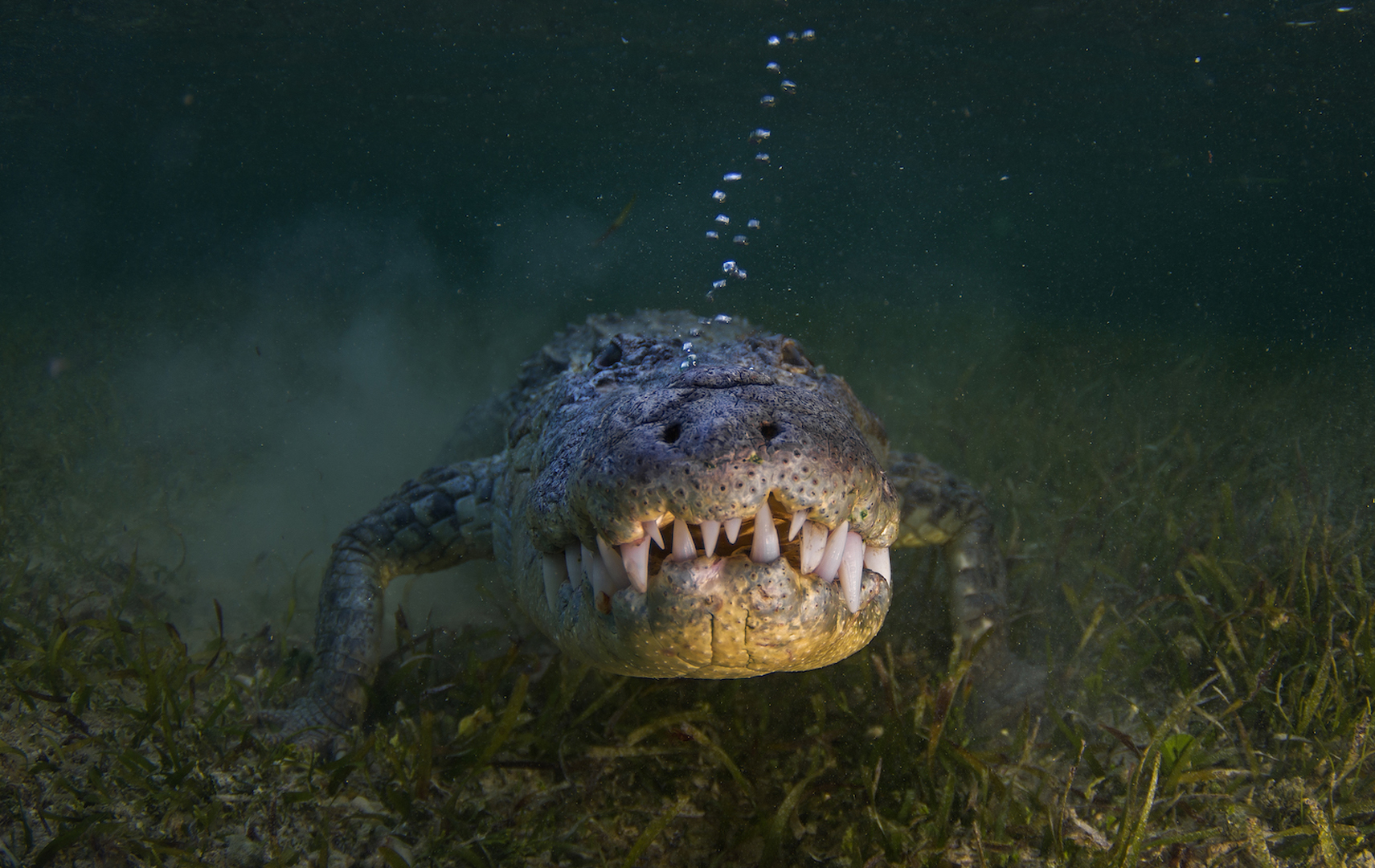 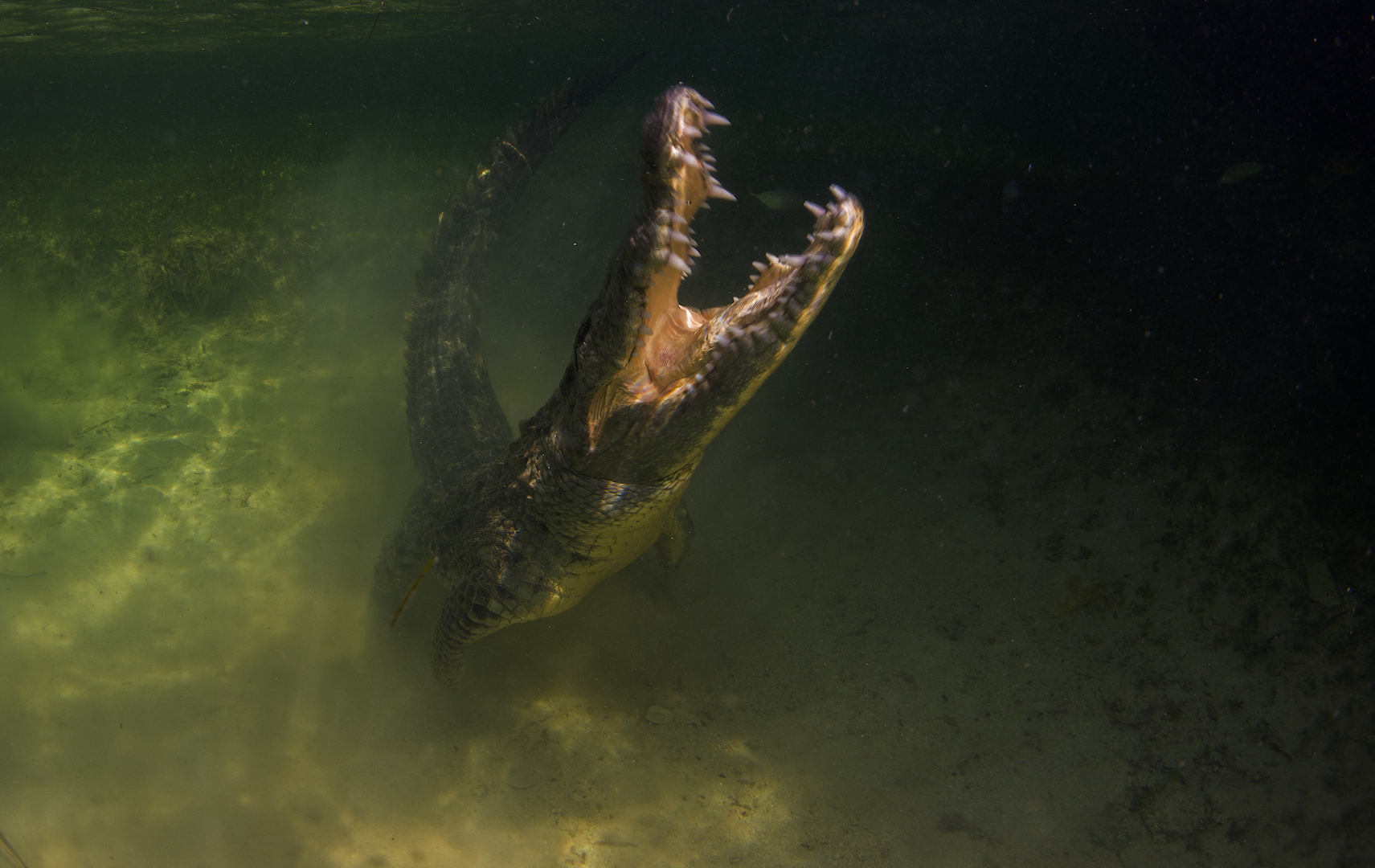 Crocodiles wander near the fishermen’s huts looking for rejected fish and offal parts that make an easy meal. Their diet normally includes fish, crabs, insects, birds, snails, and frogs. The one on the left was releasing air bubbles having just submerged after basking in the sun. The crocodiles’ narrow, triangular snouts have sharp teeth that give them a powerful bite. The fourth tooth on both sides of the lower jaw remains visible even when the mouth is closed.

Crocodiles are usually about 15 feet long, though some in the wild can grow up to a whopping 20 feet. The reptiles live up to 70 years! Though their numbers in the wild are increasing, the species is still considered vulnerable. 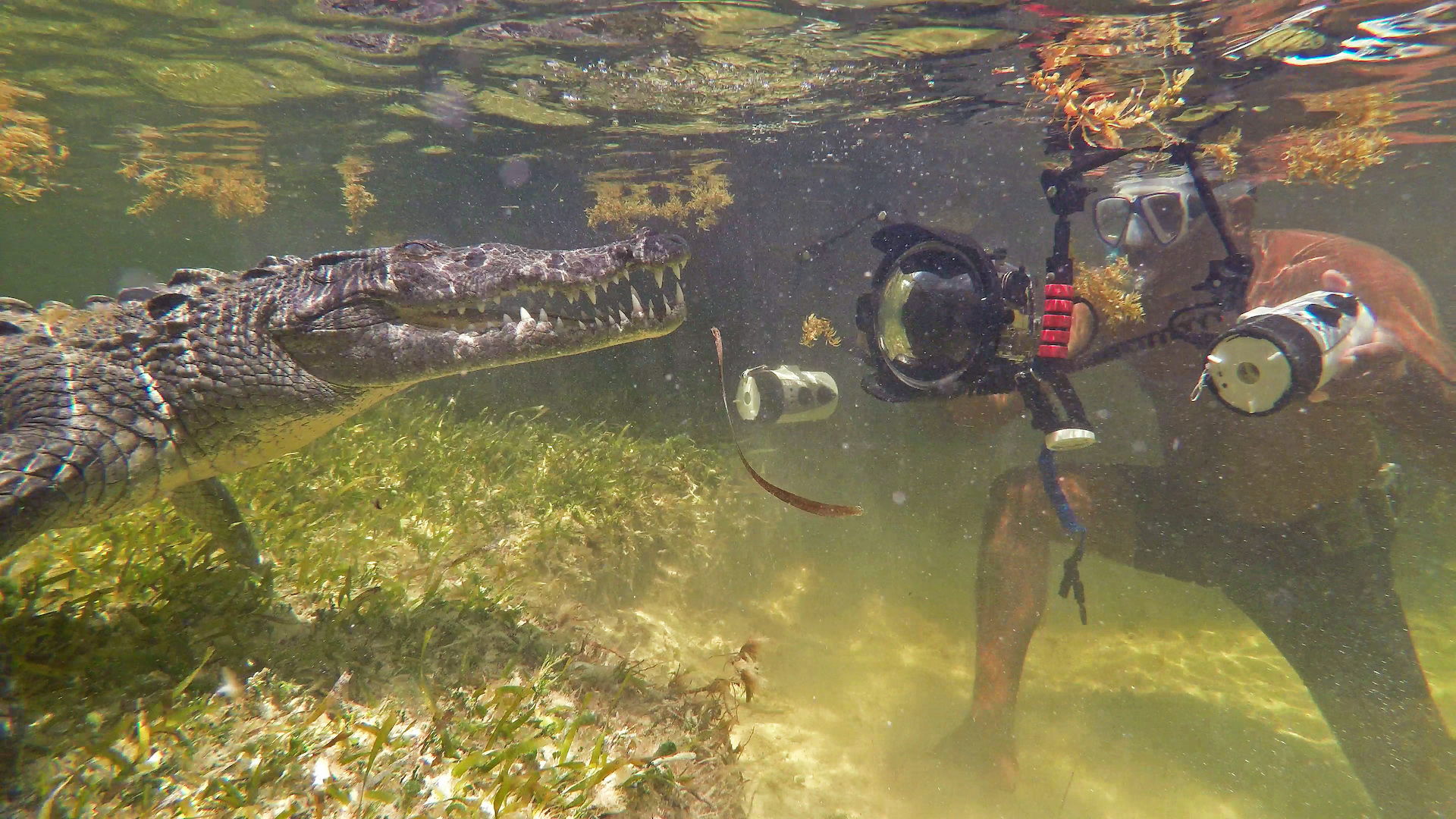 FROM THE FIELD: Out of their element away from the mangroves, the crocodiles were not aggressive and permitted me to get quite close. However, I had to stay alert as there were times that there were three in front of me and two right behind. A safety diver also stays in the water at all times, armed with a long pole to push away the crocs in case of a problem.

Flight of the Falcons: Migration, Conservation, and Great Resilience