For three months every year, female great hornbills stay sealed in a hole, with only a crack to receive food from their mate

Great hornbills are fascinating birds, even if you set aside their vivid appearance. For starters, they are monogamous and mate with one partner throughout their lives. More intriguing still, is their nesting arrangement that involves the female sealing herself in a hole for months at a stretch.

“Everything about them is unique,” says hornbill biologist Pooja Pawar, who has been observing the birds for over five years now. Pooja has been monitoring the populations in the Anaimalai Hills of Kerala and Tamil Nadu, with a focus on nesting. “I find their parenting behaviour very interesting, very specialised, and I am curious to see how they adapt to the changes in their landscape.”

Great hornbills are generally found around primary forests that are thick, lush, and abundant. But lately, the birds have been sighted in coffee plantations too, foraging for fruit, even nesting on occasion. Sightings have been recorded in the Terai grasslands and Corbett National Park, Uttarakhand, but the most recognised habitat of the great hornbill is the Western Ghats and parts of Northeast India.

Every year, as winter approaches, the heritage village of Kisama in Nagaland begins preparations for the annual Hornbill Festival. Attended by locals and travellers from across the world, the ten-day event is a celebration of the state’s cultural heritage. There are tribal dance performances, stalls selling beaded Naga jewellery, and plenty of local food and drink (from smoked pork to chhang) — all set against the backdrop of the lofty Japfu peak.

But alas, few real hornbills to be seen.

A few decades ago, it was quite common to see birds soaring above the misty forest canopy around Kisama. Today, the only living hornbill in the state is probably at the Nagaland Zoological Park, a feisty female called Julie, that has occasionally made appearances on the zoo’s Facebook page.

Hornbills and indigenous communities around the world have had a complex relationship. For instance, the Iban people of Borneo think of the bird as a messenger of the spirits, a winged vehicle that transports souls to the afterlife. On the Indonesian island of Sumba, they are considered symbols of fidelity, while closer home in India, hornbills are revered by tribes of the Northeast. Their large, back-and-white feathers were once awarded as badges of honour, and are still worn by erstwhile chieftains during ritual performances. However, this relationship hasn’t always been healthy. Great hornbills were once hunted almost to extinction for their casques, by some tribes in Northeast India. 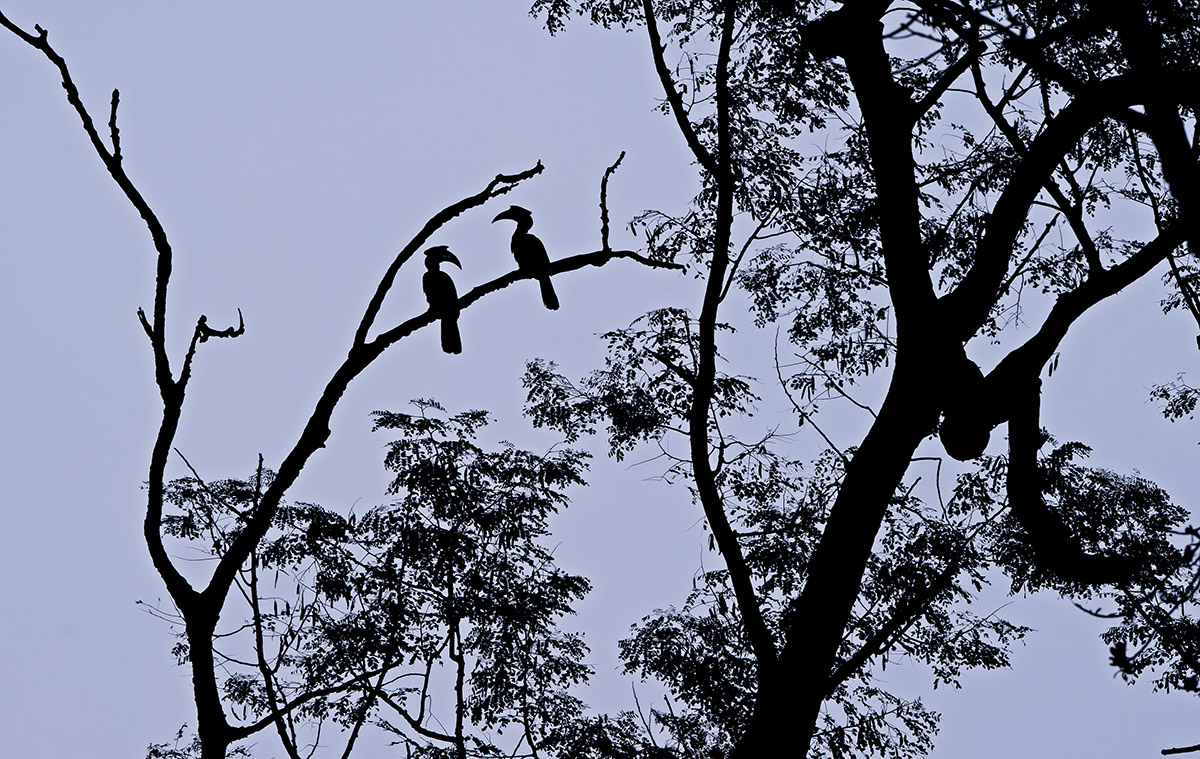 Finding a mate is a matter of grave importance to great hornbills as they are monogamous. As part of the courtship, males bring females food daily, sometimes for as long as a month, to prove they are reliable mates. Once two birds have coupled, they spend a great deal of time together, foraging for fruit and dispersing seed along the way. Great hornbills are especially fond of wild figs and can eat up to 100 fruit in a single meal. Photo: Dhritiman Mukherjee

Great hornbills nest in hollow tree cavities, though they do not excavate these tree cavities themselves. Instead, males and females scour the forest for the perfect hole: high enough to afford security from ground dwellers, camouflaged so rival hornbills don’t see them, and large enough to fit an adult female and her eggs. Picking the right spot is crucial as pairs return to the same nest year after year, to raise their young together. “There is a pair of hornbills in the Anaimalai Hills, that has been using the same nest for 28 years,” says Pooja Pawar. Photo: Dhritiman Mukherjee

When a suitable spot is found, the female gets to work, occasionally with help from her partner. With great care, the mother-to-be starts to seal the entrance to the nest using a mix of faeces and soil. Eventually, she enters the hole herself and finishes the task from inside, leaving only a thin slit, large enough for the male to feed her with his beak. Photos: Dhritiman Mukherjee 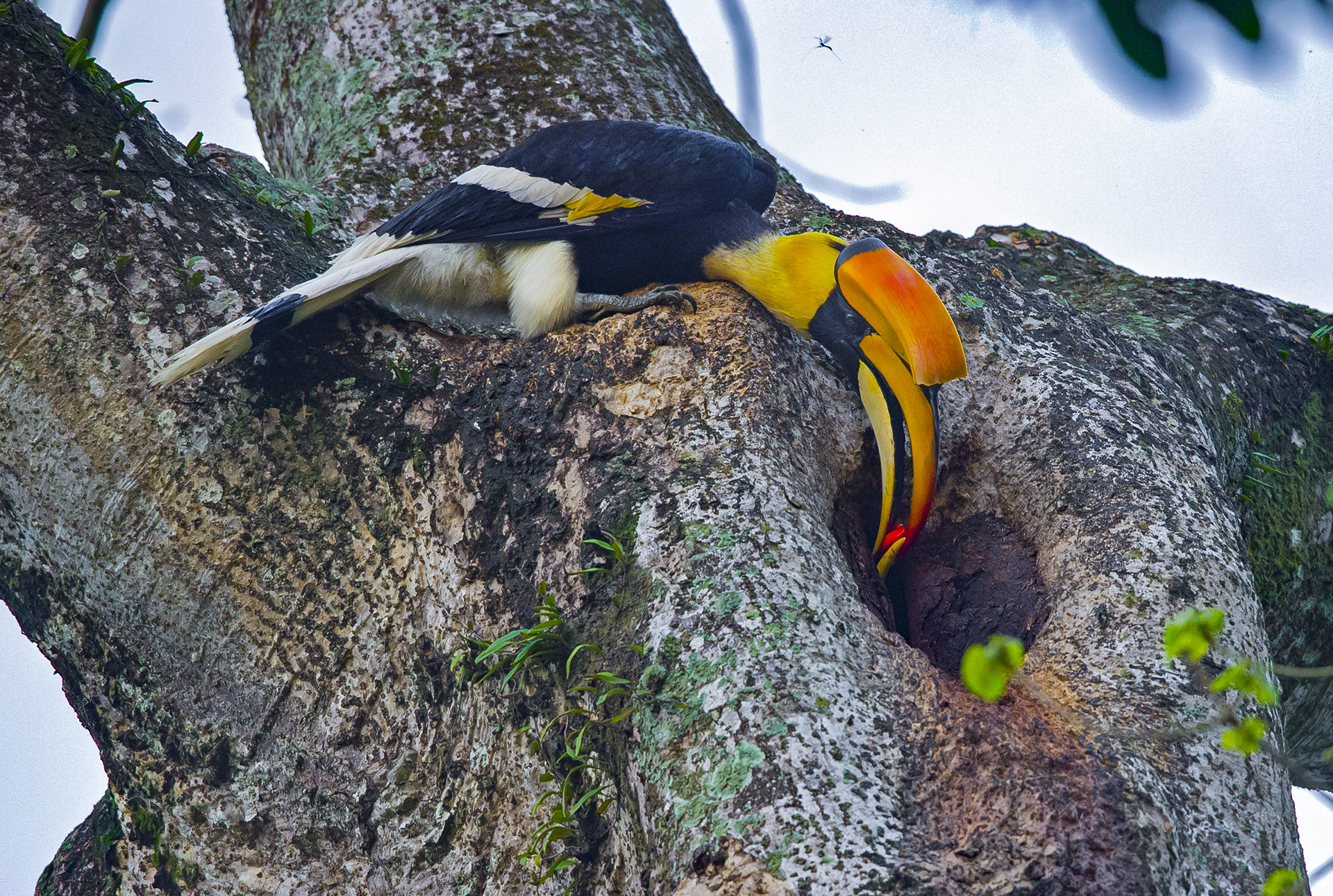 She remains like this for the next few months, relying on her partner to nourish her throughout the laying, incubating, and early child-rearing process. During this time, males may take as many as fifty feeding trips a day, bringing fruit such as figs and berries initially, and more protein-heavy morsels such as insects, squirrels, and lizards after the chicks are born. What goes in must come out, but how does one defecate in a (largely) sealed room? With great care female great hornbills position themselves in such a way that their rear aligns with the nest opening, and they shoot their poop outside. Understandably, this is a lot harder for the young birds to do, so the mother uses their faeces to fix any damage to the nest. This is done largely to keep the nest clean and free of disease. Photo: Dhritiman Mukherjee

In addition to potty training, the female has to protect the nest from potential predators like snakes and eagles, and nourish the chicks with softened scraps of food. But that’s not all. Sealed in the hole, the mother undergoes a kind of rebirth, shedding her vivid plumage for a fresh set of feathers. When the moulting is complete — a few weeks after the young are born — she breaks out of the nest, and the young birds reseal the hole from inside. Both parents feed the hatchlings for the next few weeks, until they are strong enough to break out themselves. Photo: Aparajita Datta

Baby hornbills are born without feathers, and the signature yellow casque that gives the bird their name. The plumage grows within a few weeks after birth, while the casque emerges only after a few years. The best place to see great hornbills in the wild is in Pakke Tiger Reserve in Arunachal Pradesh, but they also inhabit parts of the Western Ghats in southern India. Bhagwan Mahaveer Sanctuary in Goa, Thattekad Bird Sanctuary in Kerala, and Anaimalai Tiger Reserve in Tamil Nadu are all favourable locations to try one’s luck. Photo: Udayan Borthakur