For the Love of Nectar: What Makes Hummingbirds Tick

Ecuador has the largest diversity of hummingbirds on the planet

For a bird so small, the hummingbird packs in a lot of superlatives. It has the largest brain per body in the bird kingdom: studies claim that hummingbirds remember every single flower in their territory and how long it takes to replenish nectar after foraging. It has the fastest metabolic rate of any living creature. Their hearts beat on an average of 1,200 times per minute, pumping furiously to keep up with their wing speed. As most of us know, hummingbirds are fast, so fast that their wings are a blur to humans when they are in flight. But few are aware that they are among the fastest species on Earth, far outstripping the cheetah in terms of pace. In fact, research studies have revealed that a species called Anna’s Hummingbird can hit speeds that are faster than a jet fighter at full speed.

But perhaps the most winning feature of hummingbirds is that they are captivating, even without the general knowledge download. Their grace and iridescent plumage, changing with every movement, are a delight to watch, especially when they are foraging for nectar. The visual spectacle was one of the reasons that wildlife photographer Dhritiman Mukherjee wanted to shoot them in Ecuador, South America.

He chose the Chocó region, which has the highest diversity of hummingbird species on the planet. The slim strip of forest on the western edge of Ecuador is wedged between the Andean mountains and the Pacific Ocean, creating a tropical habitat that is lush and unique. Isolated from the rest of the Amazon by the Andes, Chocó has developed a number of indigenous species of hummingbirds, designed to thrive in this ecosystem.

Over many millennia the hummingbirds in this region have evolved into numerous sub-species, each feeding on a specific group of flowers. This reduces competition, allowing them to co-exist within the rainforest, but also makes them more vulnerable to habitat loss. Clear the native forest and the hummingbirds are at a loss. In many cases, they simply cannot feed, because their bodies and beaks have been designed for the blooms of particular plants.

Thankfully, there are a reserves in Chocó working for their survival. Within these protected forests, hummingbirds spend their days gathering nectar, nesting, and caring for their young in the primary forests they have occupied for thousands of years, and hopefully, will continue to live for thousands more. 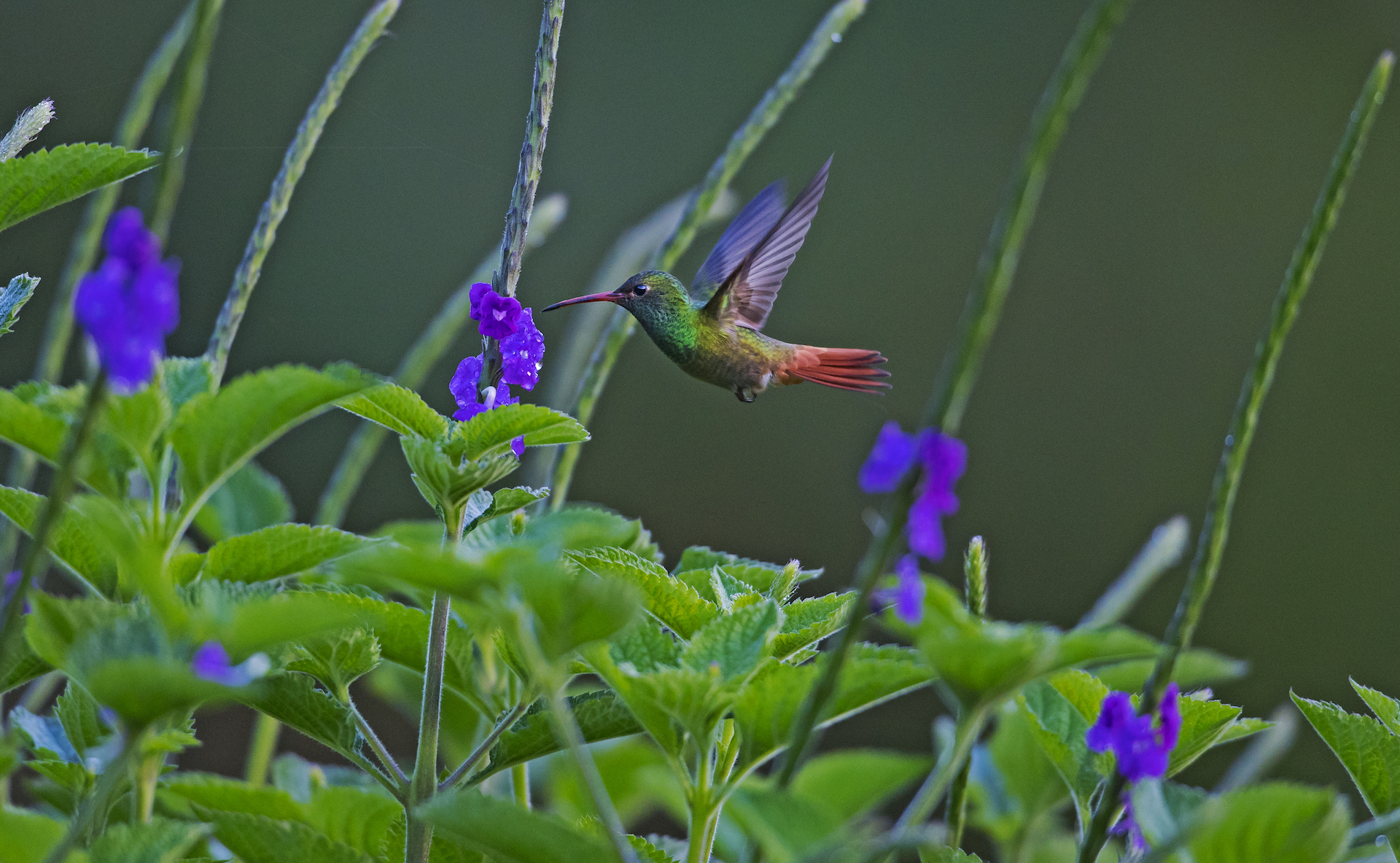 Hummingbirds spend their waking hours foraging for nectar. Like this rufous tailed hummingbird, they are voracious eaters that need to consume double their body weight in food every single day. To satisfy their energy needs, hummingbirds feed on an average of 5-6 times every hour. They can starve in as little as two hours if they don’t have flowers to feed.

At night, hummingbirds enter an energy-saving mode called torpor when their body temperature and heart rate drops, like an animal in hibernation. Their energy use falls by over 90 per cent during this deep-sleep mode, allowing them to survive the nocturnal hours without feeding. This is a fawn-breasted brilliant in the cloud forests of Chocó, Ecuador. 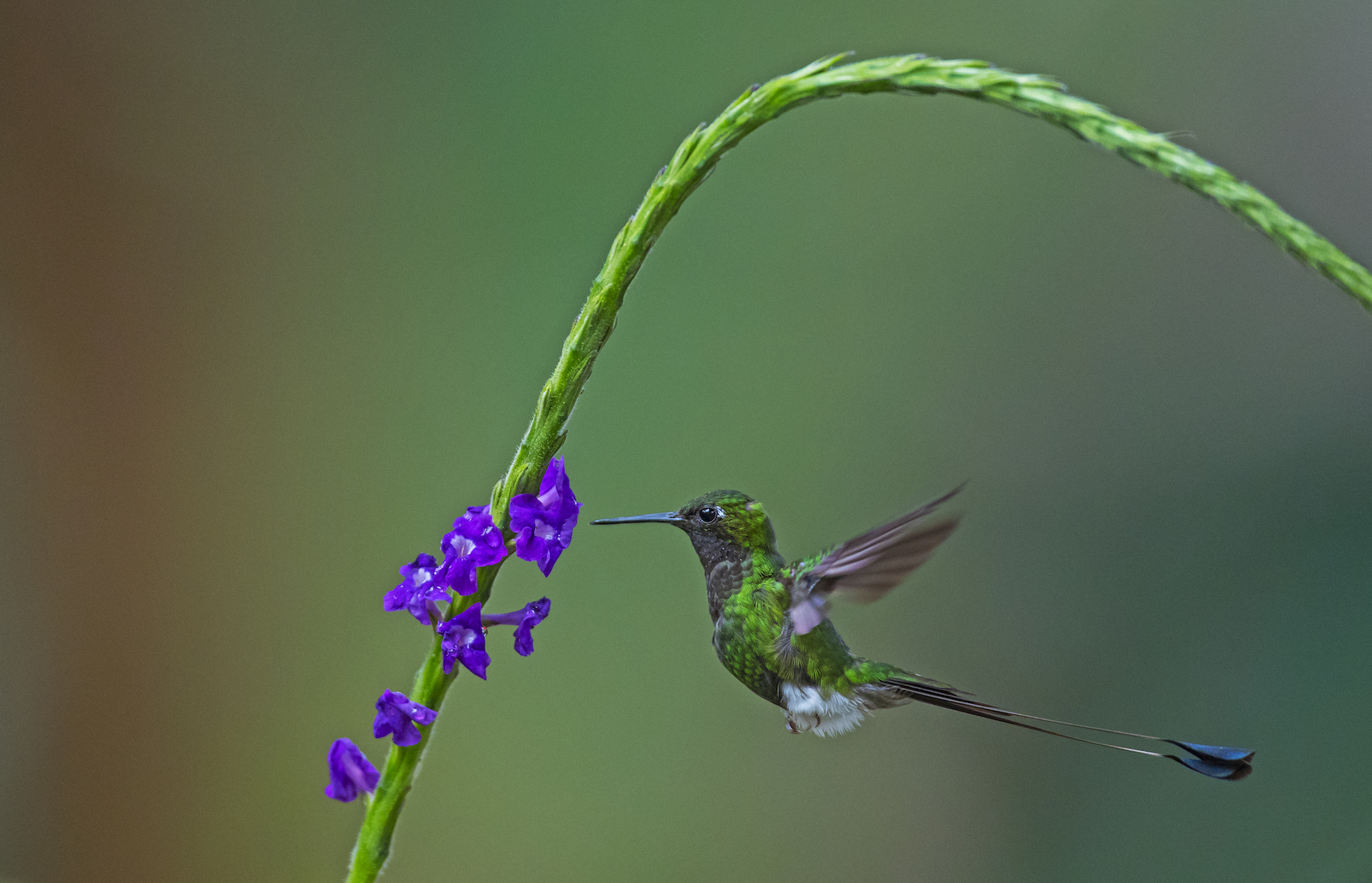 Another resident of Chocó, is the booted racquet-tail, distinguished by its unusual tail feathers. Hummingbirds are accomplished flyers, capable of both speed and dexterity. They have the fastest wingbeat in the bird kingdom, with some birds flapping their wings over 1,000 times per minute. This speed is also what inspired their title: They are named for the humming sound their wings make when they are in flight. 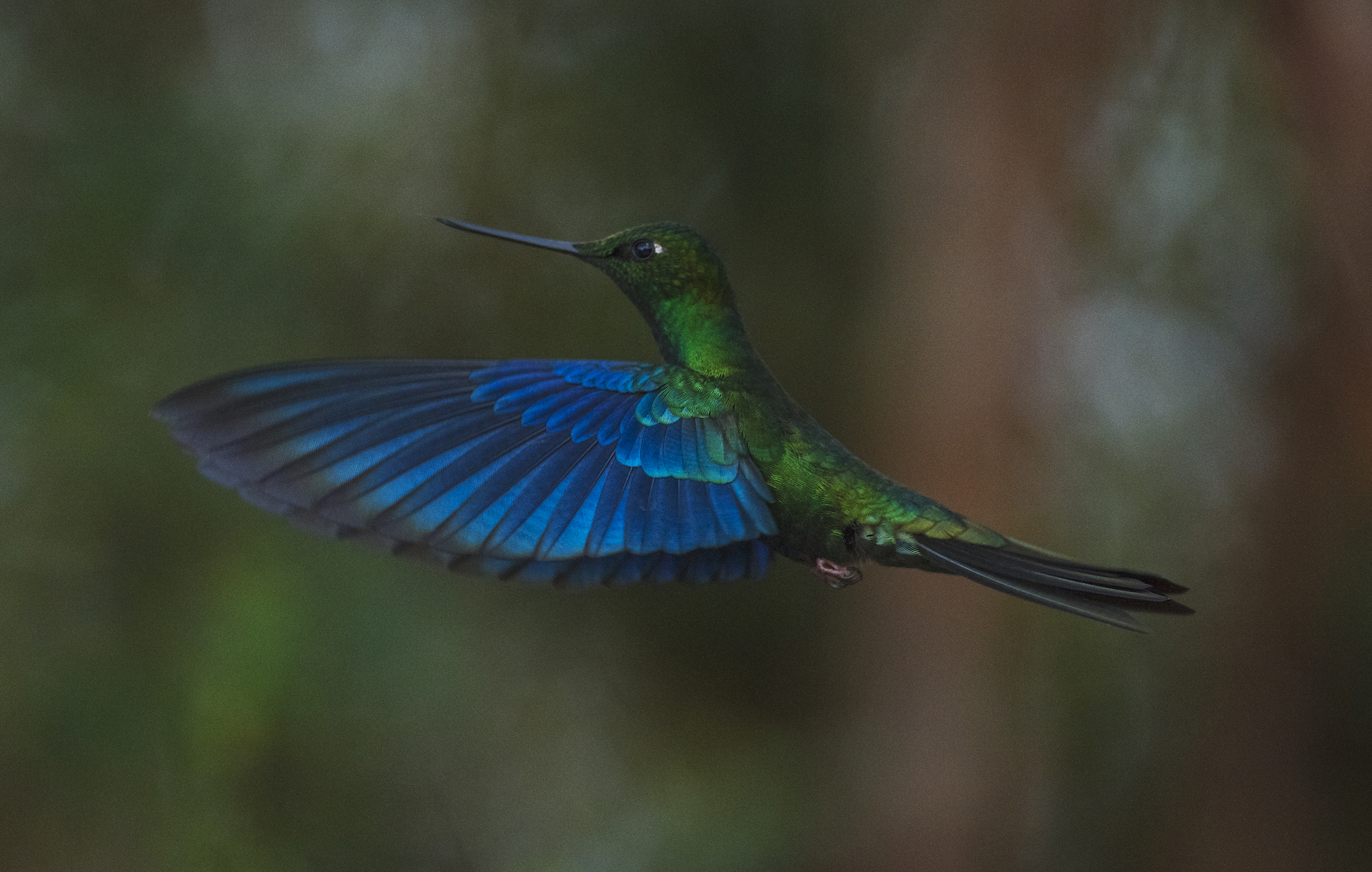 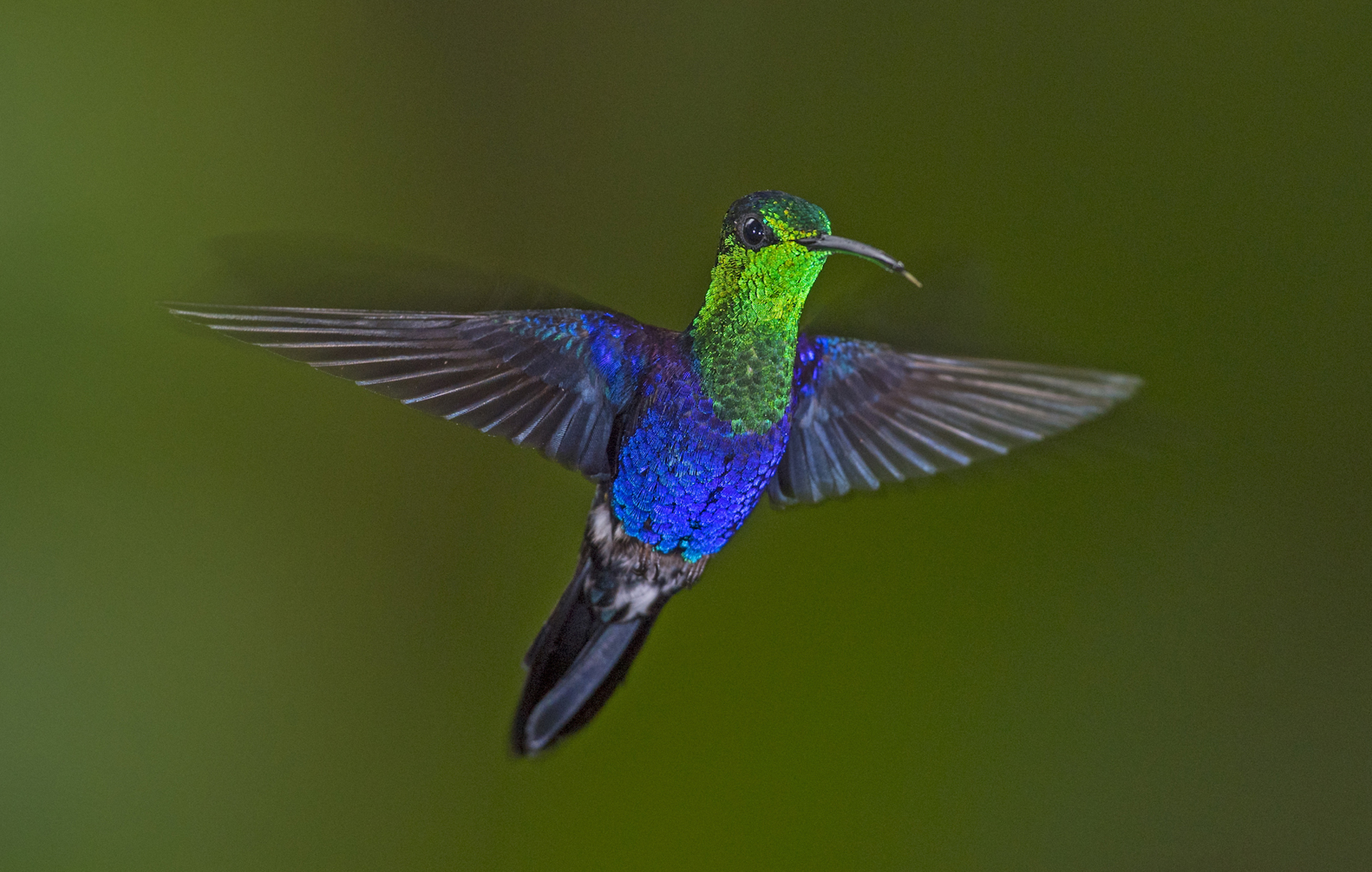 Scientists and aeronautical engineers are fascinated by the bird’s ability to hover mid-air in a single place, despite breeze and rain. Every species has subtle differences: The great sapphirewing (left) has evolved to feed in cloud forests at higher altitudes while the green-crowned woodnymph (right) is more suited to foraging in the understory of lowland forests. 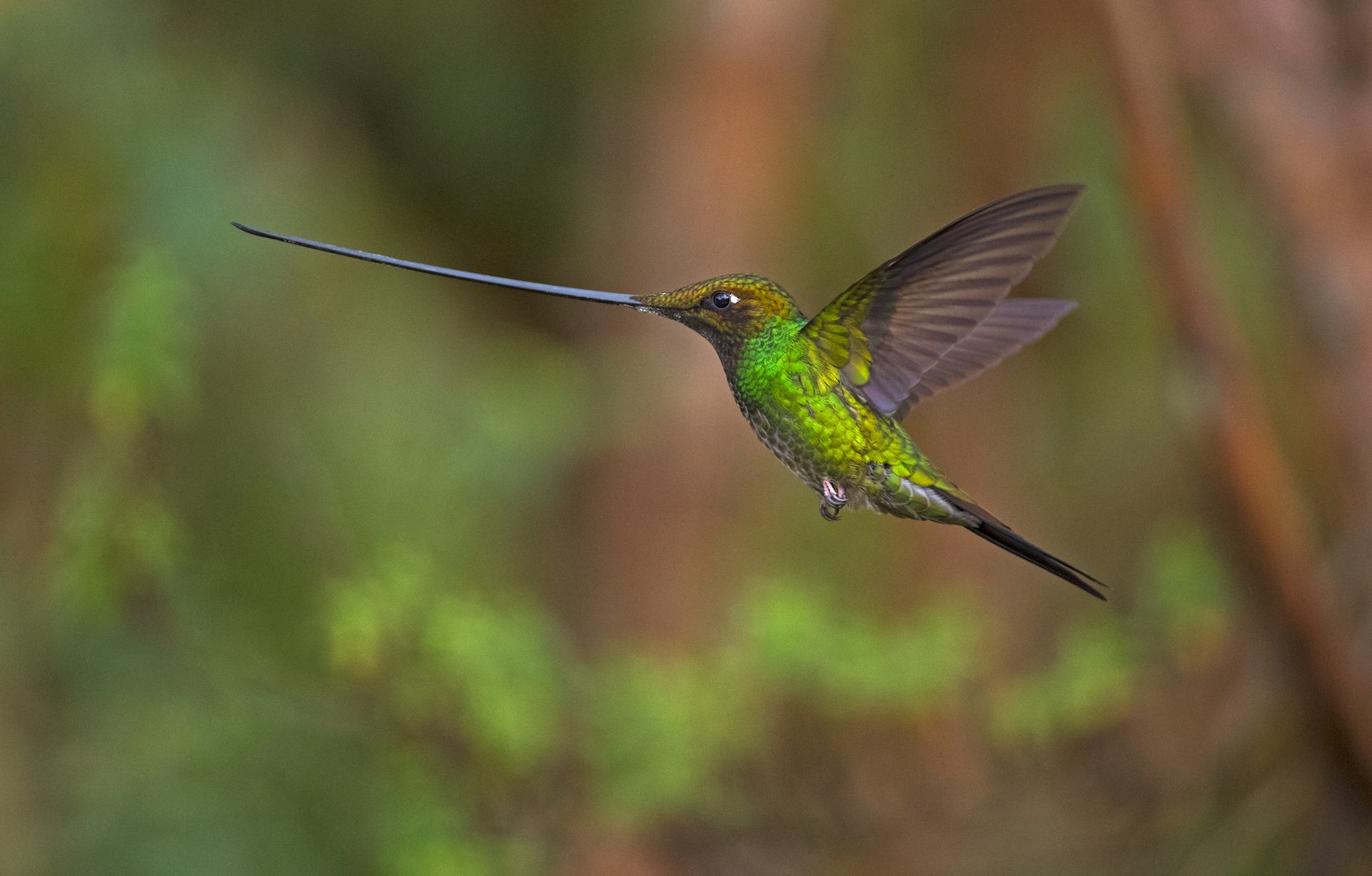 Other species, such as the sword-billed hummingbird, have evolved more obviously. This is the only bird with a bill that is longer than the length of its body, which it uses to extract nectar from flowers with long corollas. 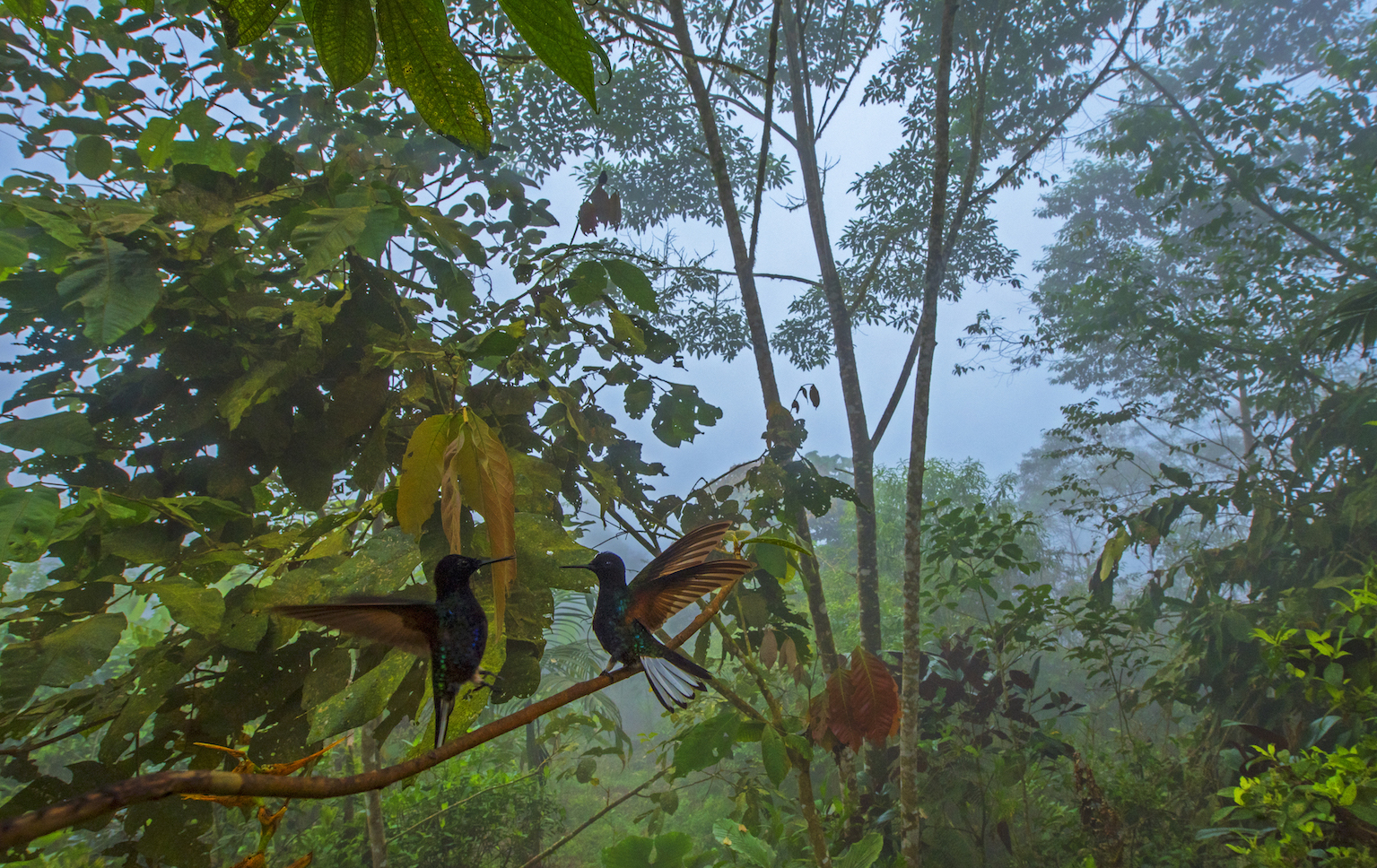 Endemic to Chocó, is the velvet purple coronet, which favours the moist forests in the foothills of the region. Offlate though, these coronets have become regular visitors to bird feeders at the many birdwatching lodges in the area. 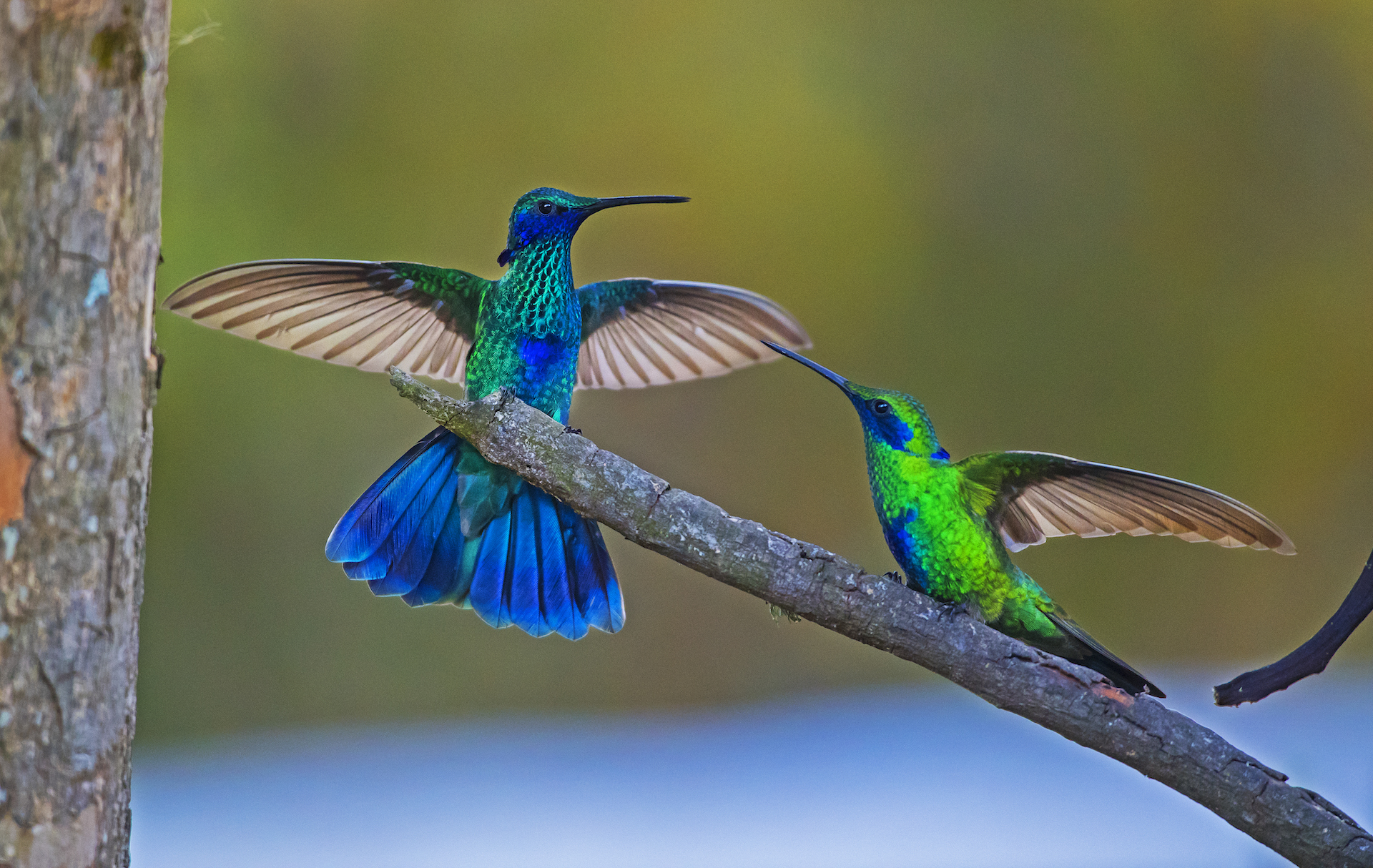 Most hummingbird species, including these green violetears, are solitary creatures that spend most of their lives alone, except for breeding. During courtship, males impress females with flamboyant flight patterns, increased wing speed. The males only involvement is during copulation. Males disperse once the act is over, and it is the female that build the nest and looks after her eggs and young ones

The white-necked Jacobin (top) is a striking sight, largely because of its exquisite plumage. It is vividly pigmented, but also has specialised feathers that are designed to capture and reflect light. As a result, certain parts of the bird change colour with the angle of light hitting their feathers (like a soap bubble). The shining sunbeam hummingbird (bottom) displays these feathers on its back.