Patience, perseverance, and expanding knowledge, from 15 years of tracking the Ladakhi Brown Bear through the Wilds of Ladakh and Himachal

For a fortnight, I trekked with great enthusiasm through the region’s passes with a team of local guides and porters, camping in mountain caves, and speaking to any locals we encountered. Fifteen nights later, we had one sighting of a black bear, but neither the tragopan nor the brown bear.

For the next 14 years, I made over a dozen trips and have trekked for weeks in the Tirthan, Pin, Tons, and Sainj Valleys, and in parts of Ladakh as well, in pursuit of this beautiful, elusive beast. It was finally in 2018, that I got my first publishable picture of the brown bear. But by then that didn’t seem important anymore. What was fascinating was how much I had learnt in each of these journeys. Sure, I didn’t necessarily get great sightings on most of these trips, and the most logical conclusion would be to deem them “failed trips”. But that’s where I see things a little differently. In each one of these “failed” trips, I learnt something new about the behaviour of the brown bear. After every one of these trips, I’d come back and use my newfound knowledge to get one step closer to shooting the brown bear.

The Ladakhi brown bear is distantly related to the grizzly bear, and is the largest predator in the upper Himalayas. Locals in Ladakh call it “Den-mo”. I took multiple trips with the semi-nomadic Gaddi shepherds between 2005 and 2006. Mostly livestock herders, they travel from the Punjab plains all the way to the greater Himalayas. Every morning the shepherds would give me a few rotis and then set off with their animals for the day, while I scoped out the local area. From them I learned that bears hunt sheep, mostly in the month of September.

During September and October, Gaddi shepherds often sleep at the mouth of caves, with the livestock huddled inside, so they know if a predator, particularly a leopard or bear, is approaching. Ladakhi brown bears are omnivorous and survive on a diet of grasses, roots, berries, and insects, frequently found in meadows. Occasionally, the bears will hunt small mammals and herbivores such as sheep, usually just before winter, when most flora has yielded to the cold. Shortly after, they hibernate, emerging again around April-May, when the grass is green and food is plentiful again.

Most of my later bear-scouting trips were between March and May, when bears emerge hungry from hibernation. We stayed in caves as much as possible, as they are relatively inconspicuous compared to tents. This image (above) was taken in 2010 at Mahjoni Cave in Tirthan Valley, Himachal Pradesh.

On our second day of camping at Mahjoni, we spotted a brown bear sniffing around a meadow 100 m below the cave. At the time, I didn’t want to get any closer, as I thought I might disturb it, but I watched it from afar. The next morning I set off early, to set up a camera trap in the same meadow. Three days later, I was still waiting for the bear to show up.

Disheartened but determined, we set off to the Tirthan Valley, at a higher altitude. On our first evening, camping above the Tirthan River, I noticed a familiar brown blob, gambolling along the mountainside, on the opposite riverbank. The bear looked so relaxed and content, I felt certain he would be back the next day. The following morning, I set up a camera trap, and waited outside the cave, ready for action. Around 7 pm, the bear showed up, sniffed around a little bit, appearing relaxed as on the previous day. That is, until he reached the part of the meadow that I had walked in. I watched in amazement, as it retraced my footsteps, following the exact path that I had taken earlier that morning. Then, it turned around and disappeared. That trip was a bit of a game changer for me. It was 2010, and I had been intermittently tracking the bear for six years already. Six trips and only a few fleeting sightings. On the one hand, it seemed like bad luck, on the other, I had gathered a wealth of information about the species over this time. I knew, for instance, that Himalayan brown bears are extremely shy of human presence. Thanks to my experience in Tirthan, I also knew that they had a strong sense of smell ⁠— I had set up that camera trap at 7 am, and 12 hours later, the bear seemed to easily sniff my scent.

In April 2011, I made my annual pilgrimage to Himachal, arriving early, intending to beat the seasonal inflow of hikers and locals. My journey began in Sainj Valley known for its meadowed hillsides. A fortnight later, there was still no sign of the brown bear.

In Sainj and Jiwa Nala, where I expected solitude I encountered locals foraging guchchi mushrooms (bottom right), and wild, medicinal herbs (bottom left), both sought-after ingredients from these parts. My plan to arrive early and have the place to myself had failed, but I stumbled upon yet another example of how human presence is related to the temporary absence of bears.

The following year, I tried something a little different, traveling to Ladakh’s Zanskar Valley in October, before the bears go into hibernation. In the relatively more populated Zanskar region, bears forage much later in the evening, around 8 pm, and return to their hideouts much earlier in the morning, well before sunrise ⁠— quite different from data I gathered in Himachal Pradesh. It got me thinking about how these landscapes had changed over the last decade. How many more people and structures were there now, and how much of the bears’ original territory was now almost off-limits to it. At the village of Abran, in Zanskar, I set up a camera trap near a carcass on the edge of the settlement, hoping the meat would attract a bear. It seemed like a good pre-hibernation meal to me, but it didn’t work. It did, however attract a red fox, commonly seen in the region.

In 2013, on another trip, amidst the green hills of Bhaba Valley, I met people from the neighbouring Pin Valley, who had walked all the way to collect firewood to take home. Following a tip from the wood gatherers, I hiked to Pin Valley, where we found plenty of brown bear droppings, but no bears. Until then, I was under the impression that bears didn’t visit Spiti Valley. But I learnt that they do, in a short window of time, mostly before hibernation. Perhaps it was for the livestock villagers keep, but I can’t say for sure. 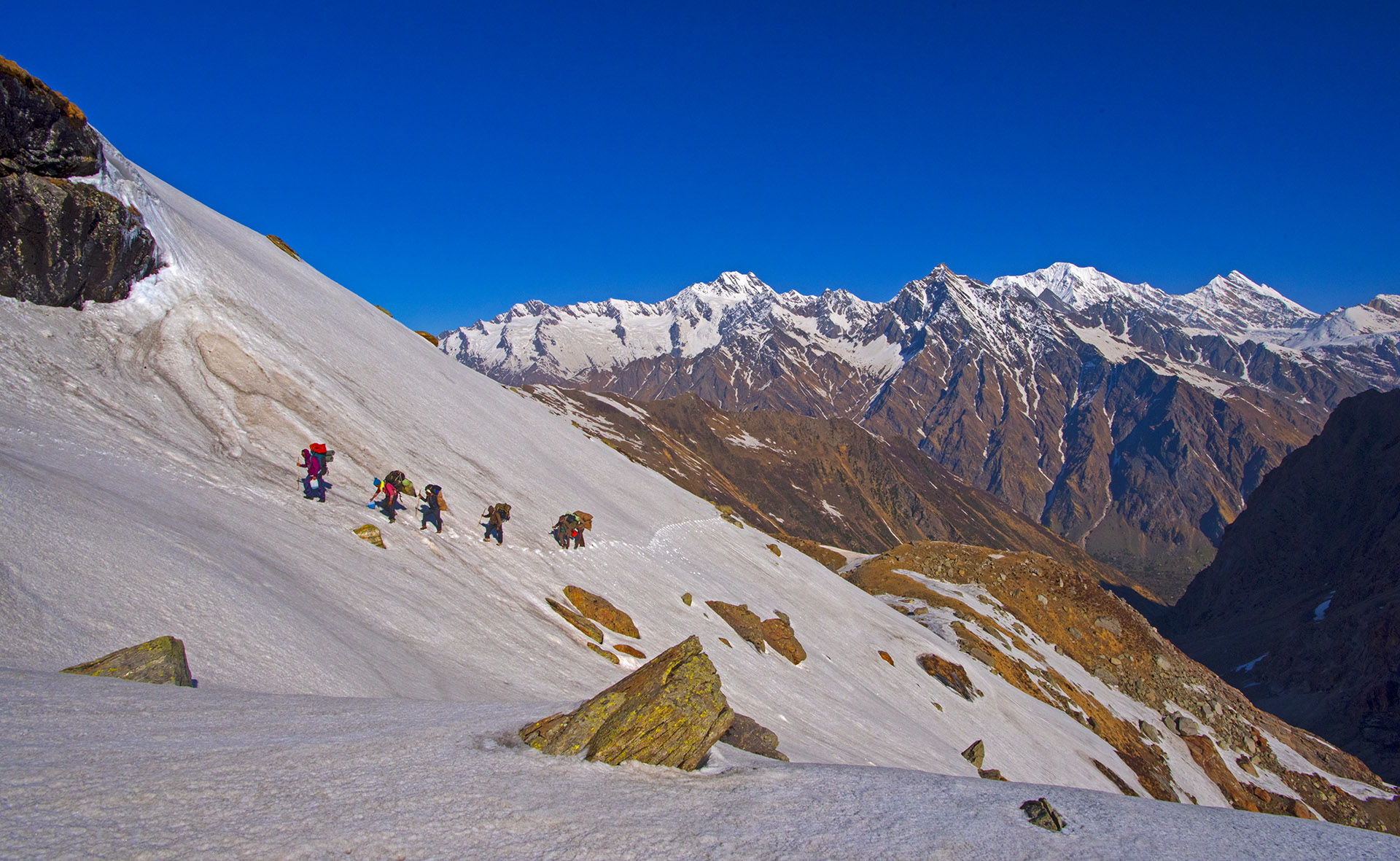 In 2015, I hiked the Khatling Glacier in Uttarakhand, hoping for a bear sighting in the snow-clad mountainside, but that didn’t happen either.

Ironically, after chasing the bear across some truly remote locations, I finally photographed it at close quarters at an army camp in Kashmir. It was a cool, summer evening in May 2018, and the residents of the army camp at Drass, in Kargil, Kashmir, were beginning to wind down for the day. I was chatting with residents about bear activity, and noted that brown bears in this region seemed to hibernate for shorter spells of time there, retiring later in the year, and emerging as early as February. I wondered if it had to do with the availability of food. I also learned of a dumpsite on the camp’s fringes, where a brown bear had been spotted a number of times. I decided to drive there after 10 pm, to minimise chances of human activity. When our jeep pulled up at the dump, sure enough, there was a brown bear on all fours, its caramel coat gleaming in the light of the car. Despite our obvious presence ⁠— our headlights were on ⁠— it didn’t run away.

The next time I saw spotted this species was in May 2019, when I saw two brown bears. They were crossing the barbed wire fence of another army camp in Kashmir, trying to gain access to kitchen waste. 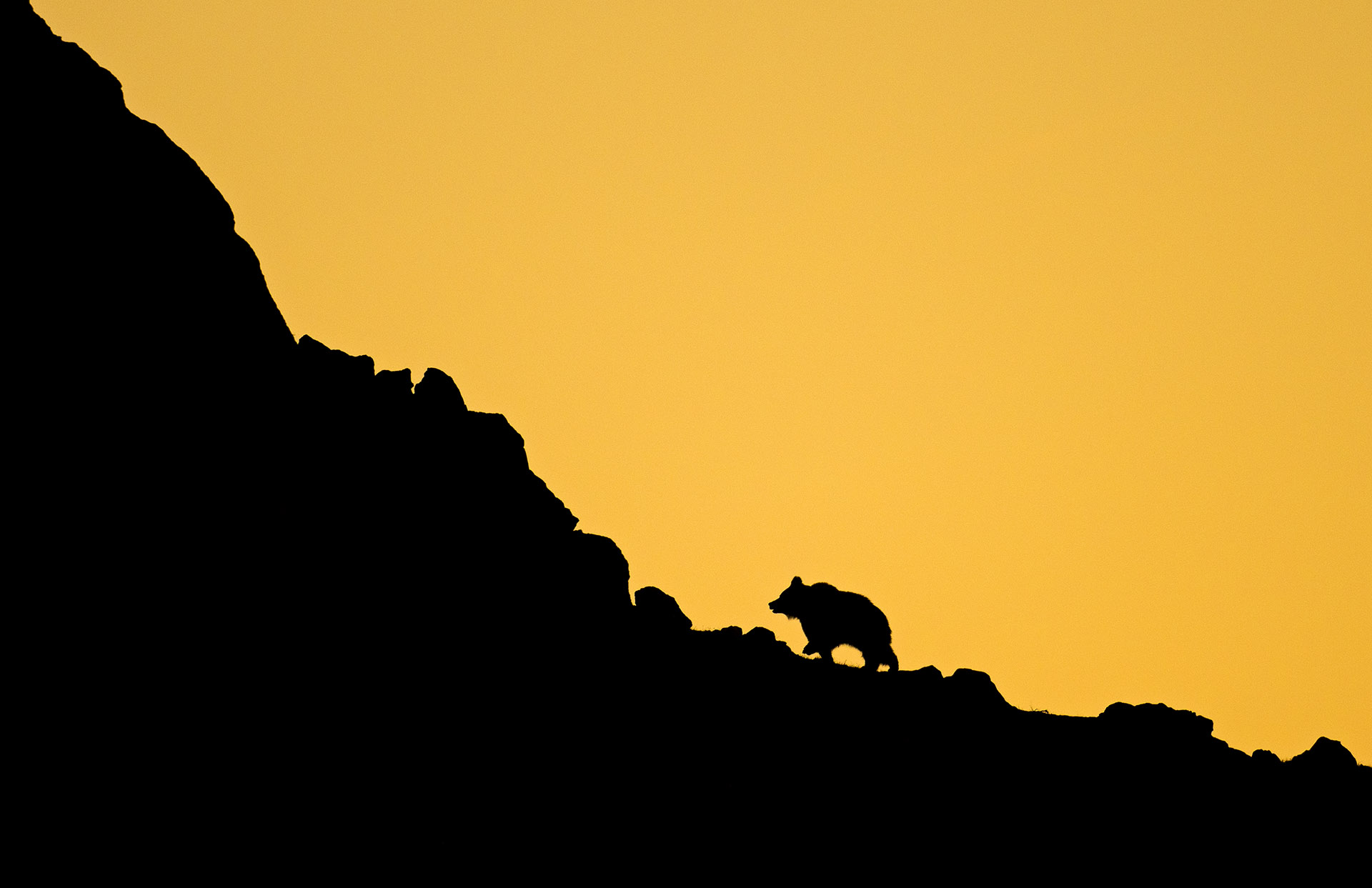 My luck with the bears seems to have improved, or maybe I’m beginning to understand them a little better after all these years. This image (above) was taken in Drass, on my most recent trip in 2019. My inability to photograph it properly for almost 14 years was actually just a long-drawn out lesson — both in natural history and in the power of persistence.