Beyond Jaisalmer in Rajasthan, only the most resilient raptors survive the surreal desert landscape

In the peak of summer, day temperatures in the Desert National Park near Jaisalmer in Rajasthan hover around 45 degrees Celsius. Sand dunes shimmer in the heat, lizards burrow into the cool underground, and antelopes like the chinkara seek shelter in the shade of khejri and acacia trees. The vastness of this sanctuary is matched by the expanse of the skies —endless and deceptively empty.

In reality, there is activity both on land and in the skies, as the Desert National Park accommodates hundreds of species, including birds and bugs, mammals and reptiles, plants and trees, all of which survive, despite the near absence of water. Ornithologists in particular are fascinated by this habitat for its variety of birdlife: over 100 species live here, ranging from the critically endangered great Indian bustard (Ardeotis nigriceps) to the more commonly seen shrikes, larks, and sandgrouses.

Then there are the raptors, aka birds of prey, with their sharp talons, beaks, and heightened sense of sight, apt for hunting from above. There are many raptor species in Desert National Park, from falcons and merlins to eagles and vultures. “I found 22 species of raptors in DNP,” says Dr Asad Rahmani, a renowned conservationist, ornithologist, and author ofWildlife in the Thar (1997). “Since then, the eastern Imperial eagle, Indian spotted eagle and merlin have been noted.” Some raptors are residents, while others visit in the cold winter months, but they are all seasoned predators of this parched landscape.

The Thar Desert represents a remarkable example of geological change. The landscape is largely barren right now, but archaeological evidence suggests that it was a hot and humid habitat in the Jurassic Period, “characterised by dense forests,” according to the IUCN website. “The fossilised remains of these 180 million-year-old forests are preserved in Wood Fossil Park at Akal, 17 km from Jaisalmer.” Photo: Dhritiman Mukherjee Rajasthan’s Desert National Park is a spread over 3,162 sq km, and inhabited by numerous species of raptors, including migratory Egyptian vultures. Cover photo: Dhritiman Mukherjee

Among the park’s most feisty inhabitants is the merlin (Falco columbaris) that visits the park in the winter months. Like other members of the falcon family, merlins are agile hunters that ambush prey by flying relatively low over the ground and flushing them out of bushes and short trees. Photo: Yash Kothiala

Eagles have relatively large wingspans that they use to soar above the ground and fly long distances. Species such as the eastern Imperial eagle (Aquila heliacal) are migratory in nature and breed in a variety of locations, including Austria, China, Greece, Russia, and Georgia. They spend the winter months in the Middle East, Africa, and parts of the Indian subcontinent, “mainly in north and northwest India, not in peninsular India,” says Dr Rahmani. Photo: Dhritiman Mukherjee

Another purely migratory visitor to the Desert National Park is the steppe eagle. The birds arrive around November every year, from Mongolia, Russia, and northern China, and linger until March. Though it is much warmer in India compared to icy Siberia, the Thar Desert can get cold in winter. In December, temperatures around Jaisalmer often dip to as low as two degrees Celsius. Photo: Dhritiman Mukherjee 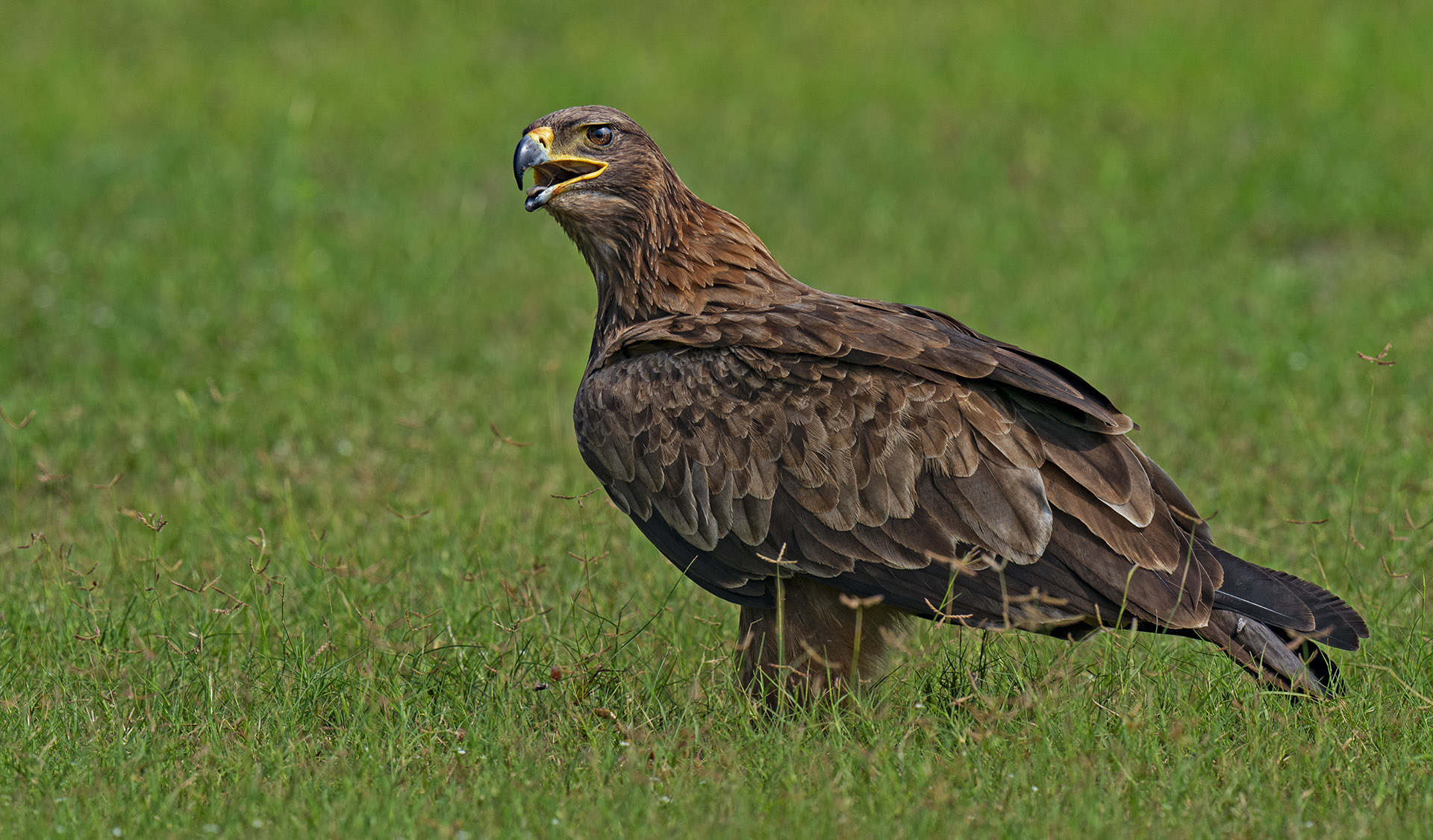 The tawny eagle (Aquilla rapax) is a little smaller in size. This regal bird of prey is found in arid habitats ranging from Saharan Africa to the Middle East and South Asia, and eats a range of prey, from rodents to small birds and mammals. Like other raptors, this eagle too will feed on carrion if available. Photo: Dhritiman Mukherjee

Laggar falcons (Falco jugger) are considered residents of Desert National Park as they breed here. These small-sized raptors nest in trees in the sanctuary, especially on the outskirts of villages. Laggar falcons are dedicated parents, and both male and females incubate the eggs, hunt for food, and train the young. “Most raptors pair for life,” says Dr Rahmani, “but unless we do long-term studies on marked birds, it is not easy to say laggars pair for life”. Photo: Soumabrata Moulick

In a research paper on breeding laggar falcons, Amith Rao and Kushal R Adaki, note that they “saw the adults interacting with the juveniles in what seemed to be a training session. The adult birds would pick up twigs from the ground and fly to a height of one metre and drop the twig. The juveniles would try doing the same by holding the twigs in their bills, or talons — imitating a hunt.” Later, they write, the juveniles were observed hunting babblers, eating lizards, even attacking crows. Photo: Dhritiman Mukherjee 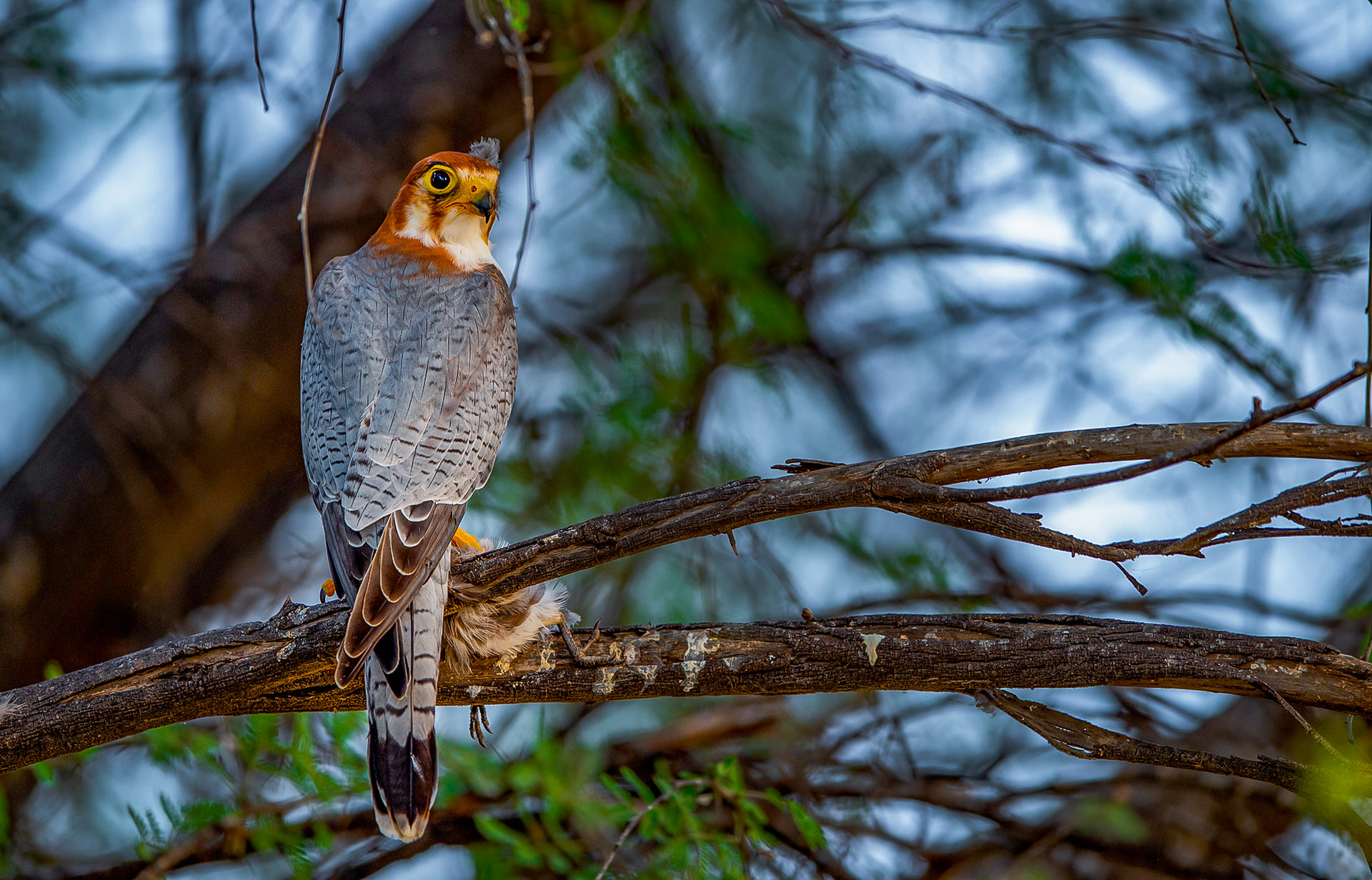 Like the laggar falcon, the red-necked falcon (Falco chicquera) also has a yellow beak and feet, and “nests around villages or even within densely populated cities in India,” according to the IUCN. Studies show breeding populations in Gujarat and Rajasthan, and in cities like Pune and Bengaluru, though increased human habitation has led to a decline in their numbers. “Possibly due to pesticide use,” says Dr Rahmani, “as they feed on small birds and large insects,” that have ingested the chemicals. Red-necked falcons are known to occupy abandoned nests of crows and other raptors. Photo: Sourabh Bharti/Shutterstock

Vultures, especially dark figures like the cinereous vulture (Aegypius monachus), get a bad rap for scavenging on carrion, but they perform crucial ecosystem services by keeping the nutrient cycle going and minimising the chance of disease from rotting meat. “Cinereous vultures do not breed on the Indian subcontinent,” explains Dr Rahmani. “They breed in Europe, Russia, Central Asia, Mongolia, and Northern China, with adult birds migrating to southern climes, sometimes within Europe.” The juveniles however, migrate longer distances “so most of the cinereous vultures that we see in India are juveniles or subadults that are darker than the adults”. Photo: Dhritiman Mukherjee

Egyptian vultures (Neophron percnopterus ) take their waste management duties one step further by consuming the excrement of certain animals — to surprising ends. The statuesque bird is distinguished from other vultures by its signature yellow face, that results from consuming the faeces of ungulates, according to a study by Spanish ornithologist JJ Negro. The paper notes that “faeces of ungulates contain large amounts of intact carotenoids, which have a pigmentary function, and are also considered to be valuable micronutrients for vertebrates because of their antioxidant and immunostimulant properties”. In Spain, the bird has been nicknamed “churretero” or “dung-eater”. Photo: Dhritiman Mukherjee

Both the Himalayan griffon (light brown) and cinereous vulture (dark brown) are winter visitors to Desert National Park. Cinereous vultures (Aegypius monachus) are the largest species of vulture with a huge wingspan that can measure up to 2.8 m. Himalayan griffons (Gyps hymalayensis ) are the second-largest vulture species. They can be seen in this park and in other parts of Rajasthan, sometimes together, feeding on the discarded carrion of livestock. Photo: Dhritiman Mukherjee

The white-rumped vulture (Gyps Bengalensis) is a South Asian species that has suffered tremendously from feeding on the carcasses of livestock medicated with diclofenac. Frequently administered by veterinary doctors in India, diclofenac is a drug that works as a pain-reliever for ailing cattle, but causes severe kidney failure among vultures. Since 2008 the drug has been banned for veterinary use, though some concessions for single-dose use have been made since 2015, and enforcement has been a difficult task. Photo: Dhritiman Mukherjee 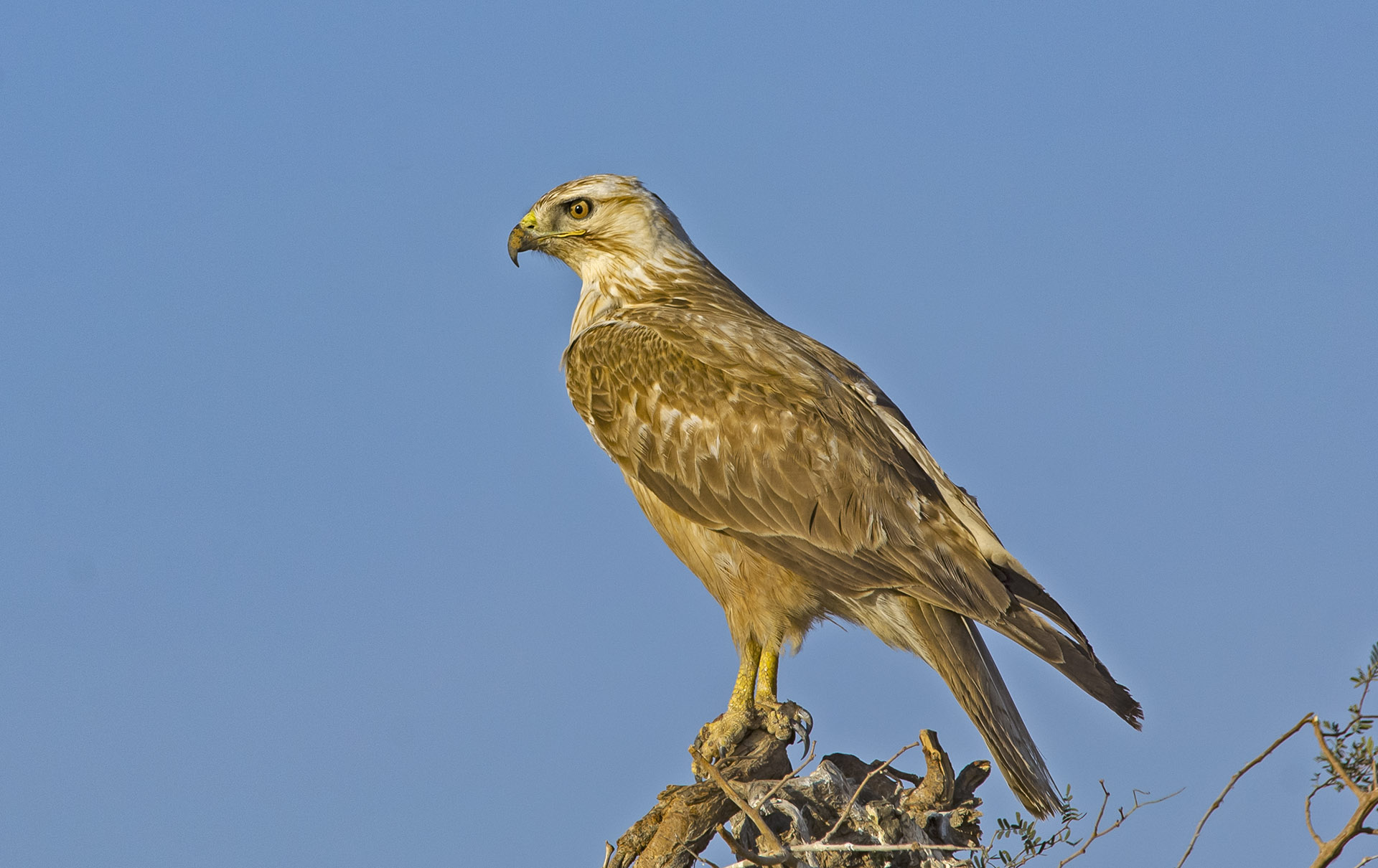 Long-legged buzzards (Buteo rufinus) are more abundant than white-rumped vultures in Desert National Park. Like many birds of prey, buzzards attain great heights during flight. Early in the day, the birds can be seen on trees and bushes, but as the weather warms and thermal winds gain strength, the raptors take to the skies, ride these upward drafts, and soar high above the ground. Photo: Dhritiman Mukherjee