Visitors can snorkel and dive with migrating whale sharks, near Isla Mujeres off Mexico’s Yucatan Peninsula.

Isla Mujeres lies a short distance from the popular tourist town of Cancun on the northeast coast of Mexico’s Yucatan Peninsula. This is where the Caribbean Sea and Gulf of Mexico meet, and where the Yucatan current brings vast quantities of essential nutrients. Between May and September each year, whale sharks migrate to the area to feed in its plankton-rich waters. Over 250 species of fish also live in the waters around Isla Mujeres and Isla Holbox and it is considered one of the most bio-diverse regions of the Atlantic Ocean.

Whale sharks aren’t whales at all. They belong to the family of sharks, and are the largest fish on Earth. However, they are largely docile creatures that don’t pose a threat to humans. Though they have been known to travel great distances, whale sharks are actually slow swimmers barely making upper speeds of 5 kmph. As a result, swimming with whale sharks has become a huge tourist attraction in Mexico.

Whale sharks love warm waters. In the area around Isla Mujeres, visiting whale sharks (rhincodon typus) tend to swim in fairly shallow waters, close to the surface. Because of this, they are prone to injury from tourist boats. Their numbers have also been harmed by targeted fishing, as bycatch in nets and they are now endangered and protected animals. 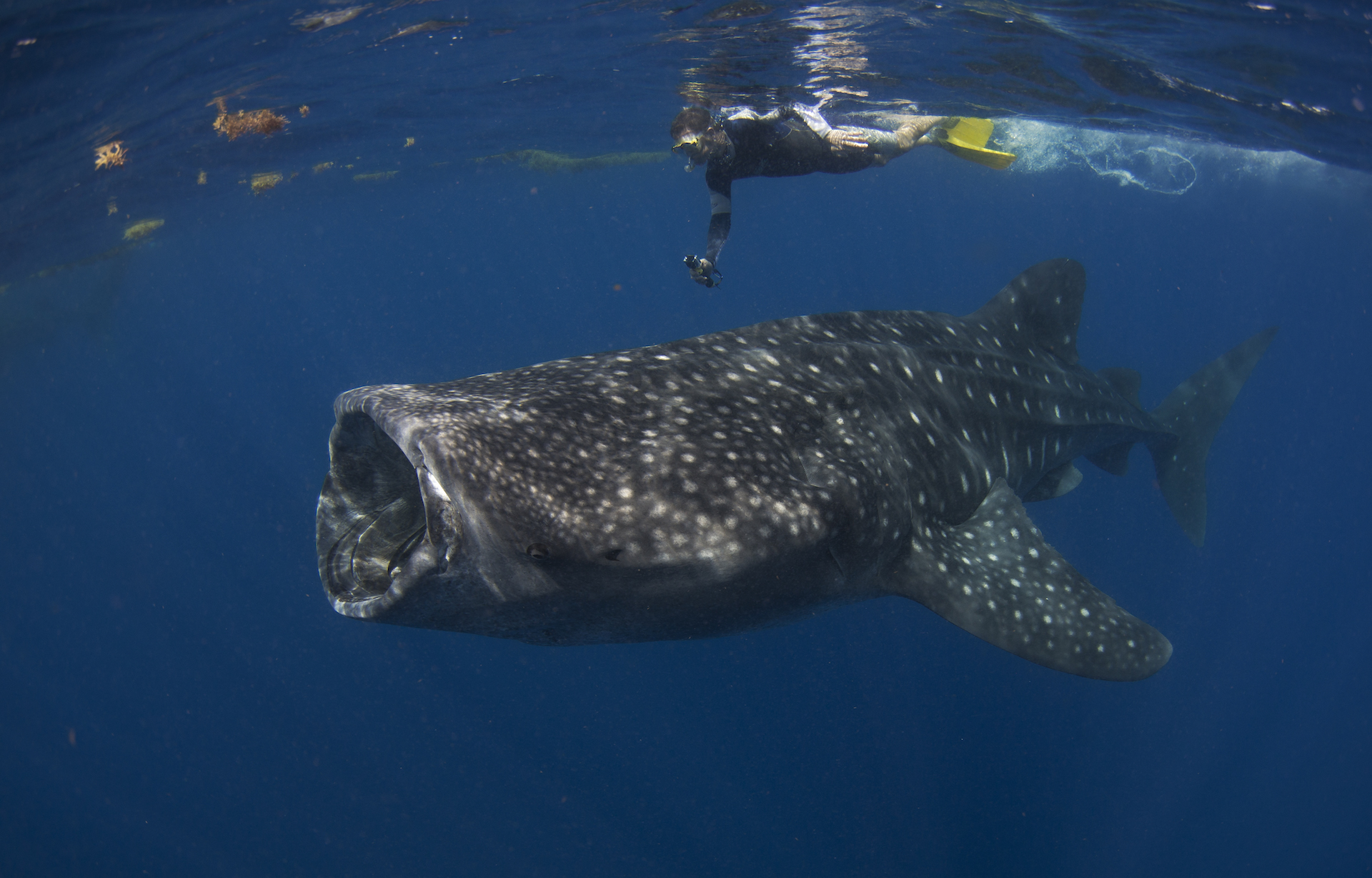 Just one hour by boat north of Isla Mujeres, hundreds of whale sharks congregate between June and September each year. Visitors are allowed to snorkel and dive with these gentle giants. Lucky visitors may be able to see up to 20 whale sharks in a single day. 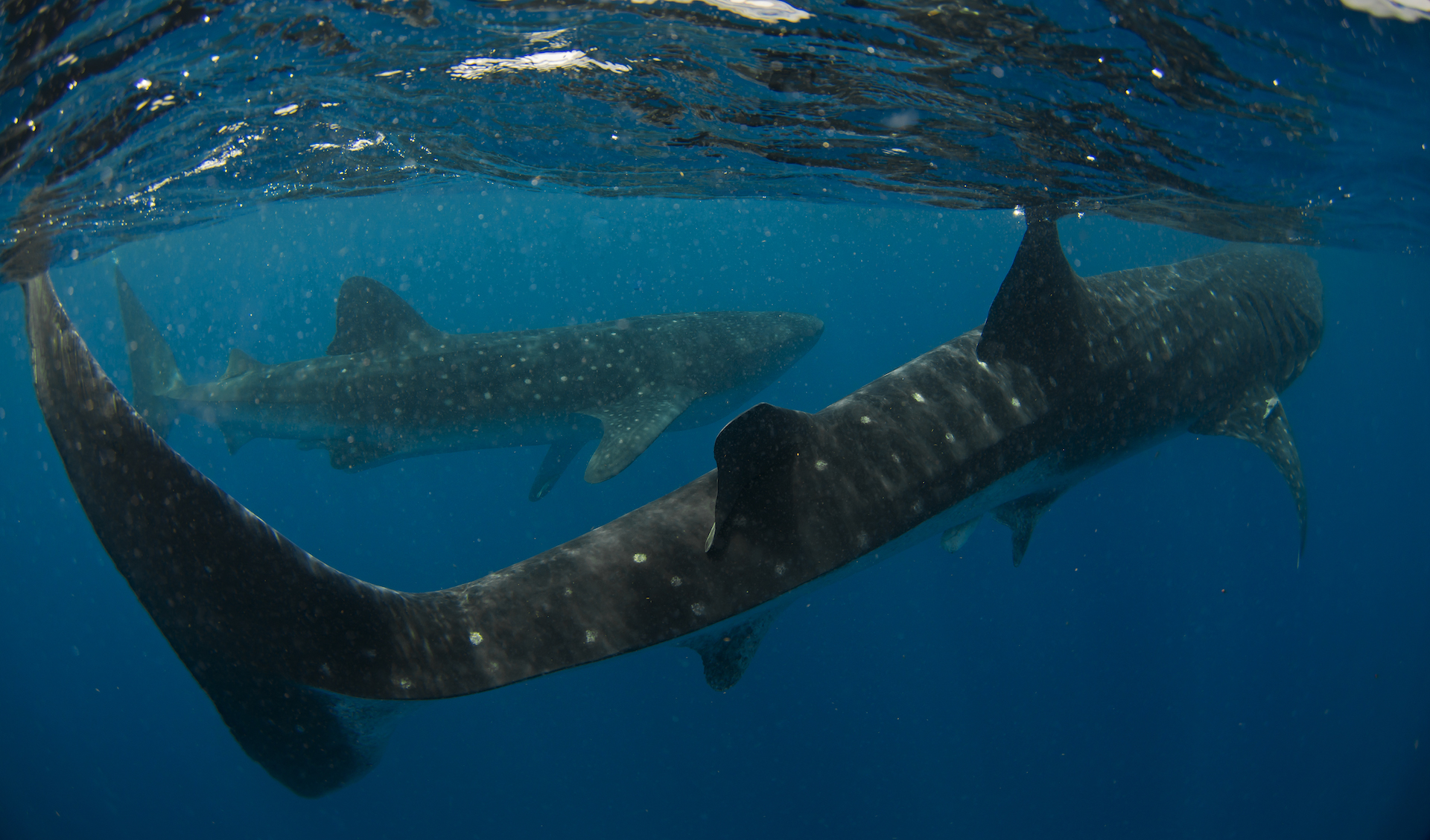 Whale sharks are the largest fish in the world and can grow to 45 feet in length and over 11 tonnes in weight. Incredibly, their life expectancy is believed to between 70-100 years.

Whale sharks swim with their mouths open, as they engage in filter feeding. The technique involves sucking water into their mouths where modified gill rakers, called filter packs, separate the food from the water. The water is then expelled from the massive gills, the slits for which can be seen on the side of the head, and the food swallowed. Besides plankton, their food includes fish eggs, krill, squid, and small fish. 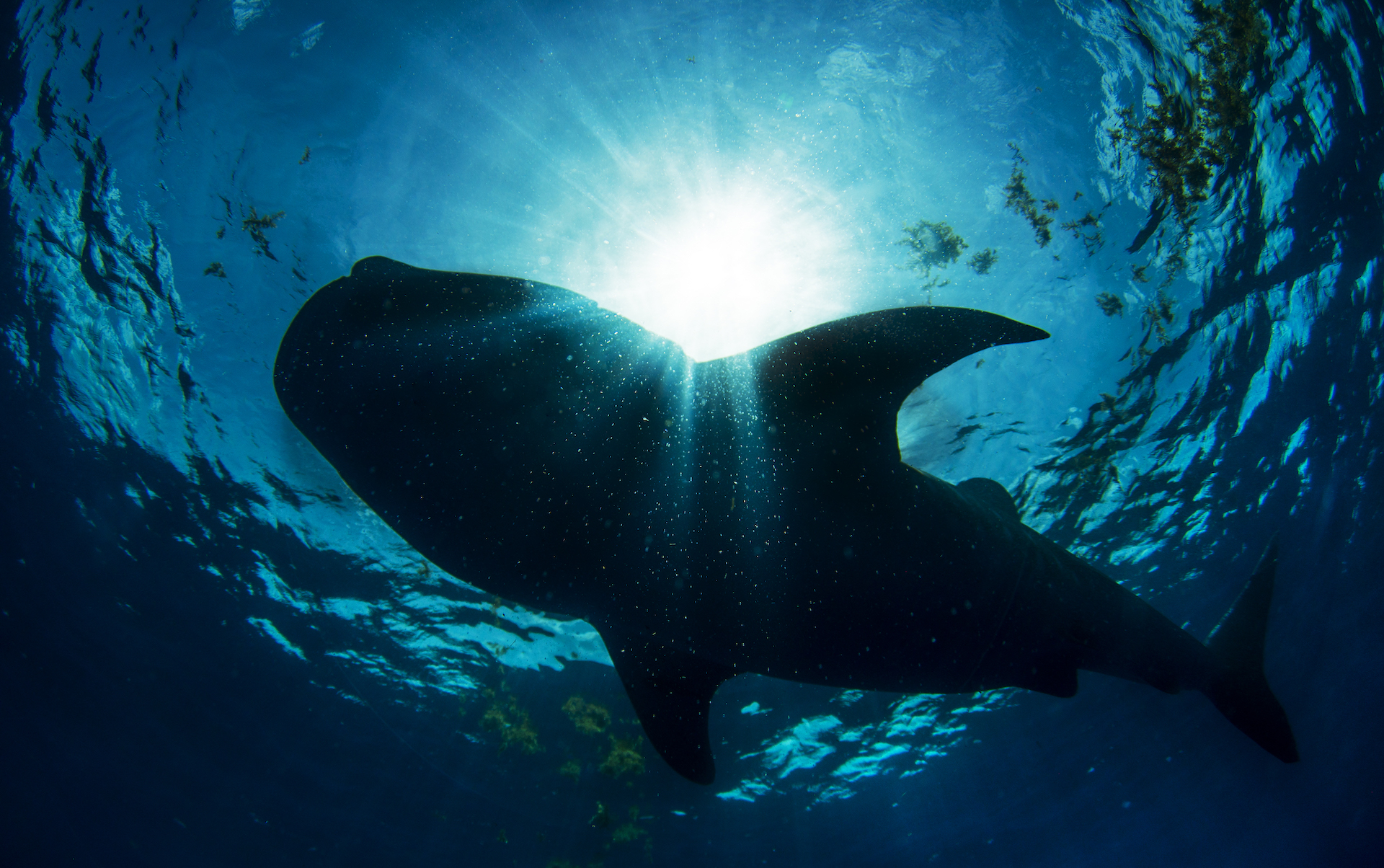 In Isla Mujeres the whale sharks tend to stay close to the surface. However, in other parts of the world, these enormous fish are also known to dive into deep waters, to depths of 2,000-3,000 feet. A few recently tagged young whale sharks have surprised researchers by swimming to a depth of 4,000 feet. 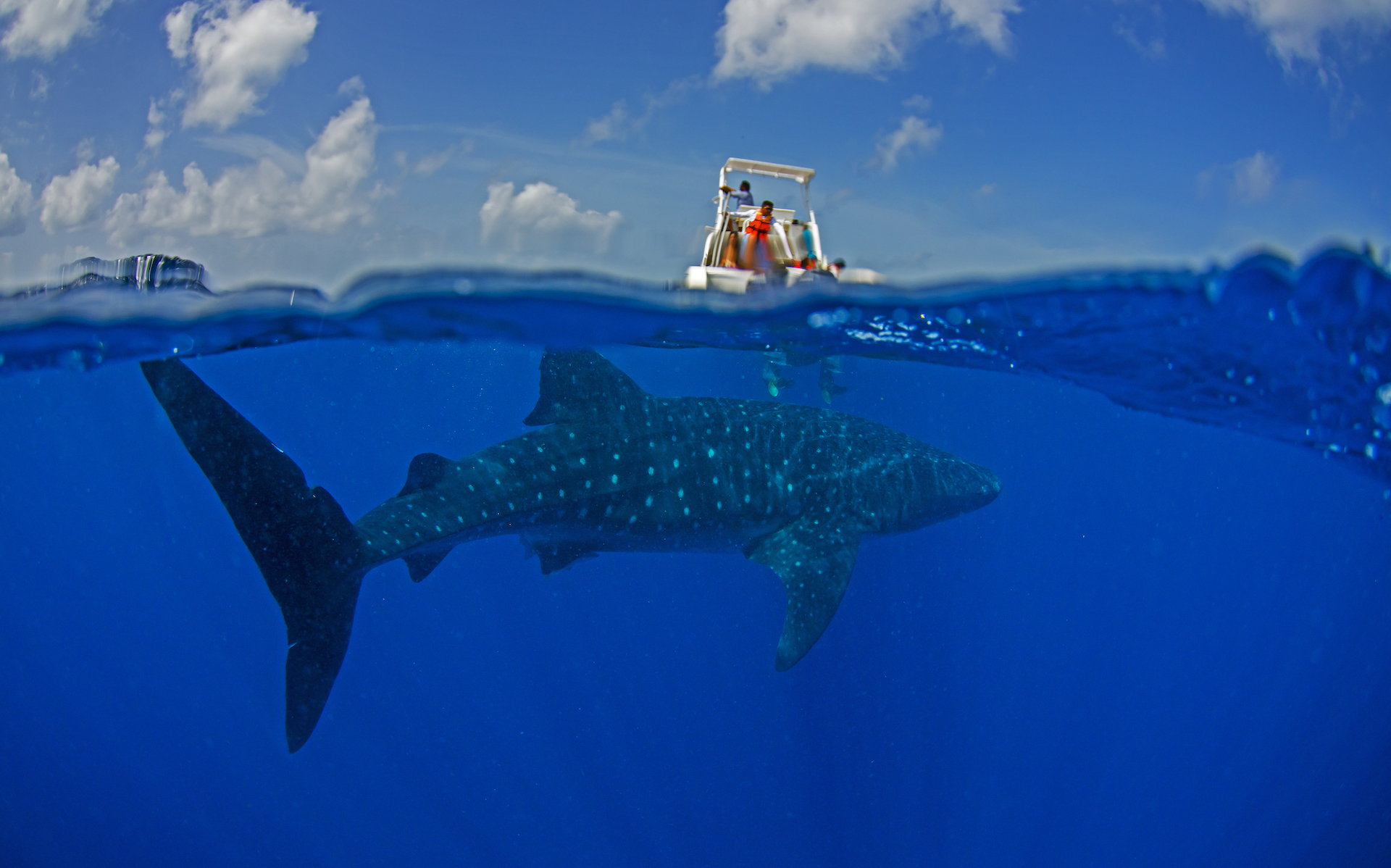 Seen against a dive boat this 15-foot long whale shark looks truly gigantic. Whale sharks have a very thick bluish-grey hide all over except on their underbelly. In some areas their skin is almost four inches thick, and covered in easy to identify pale yellow patches. 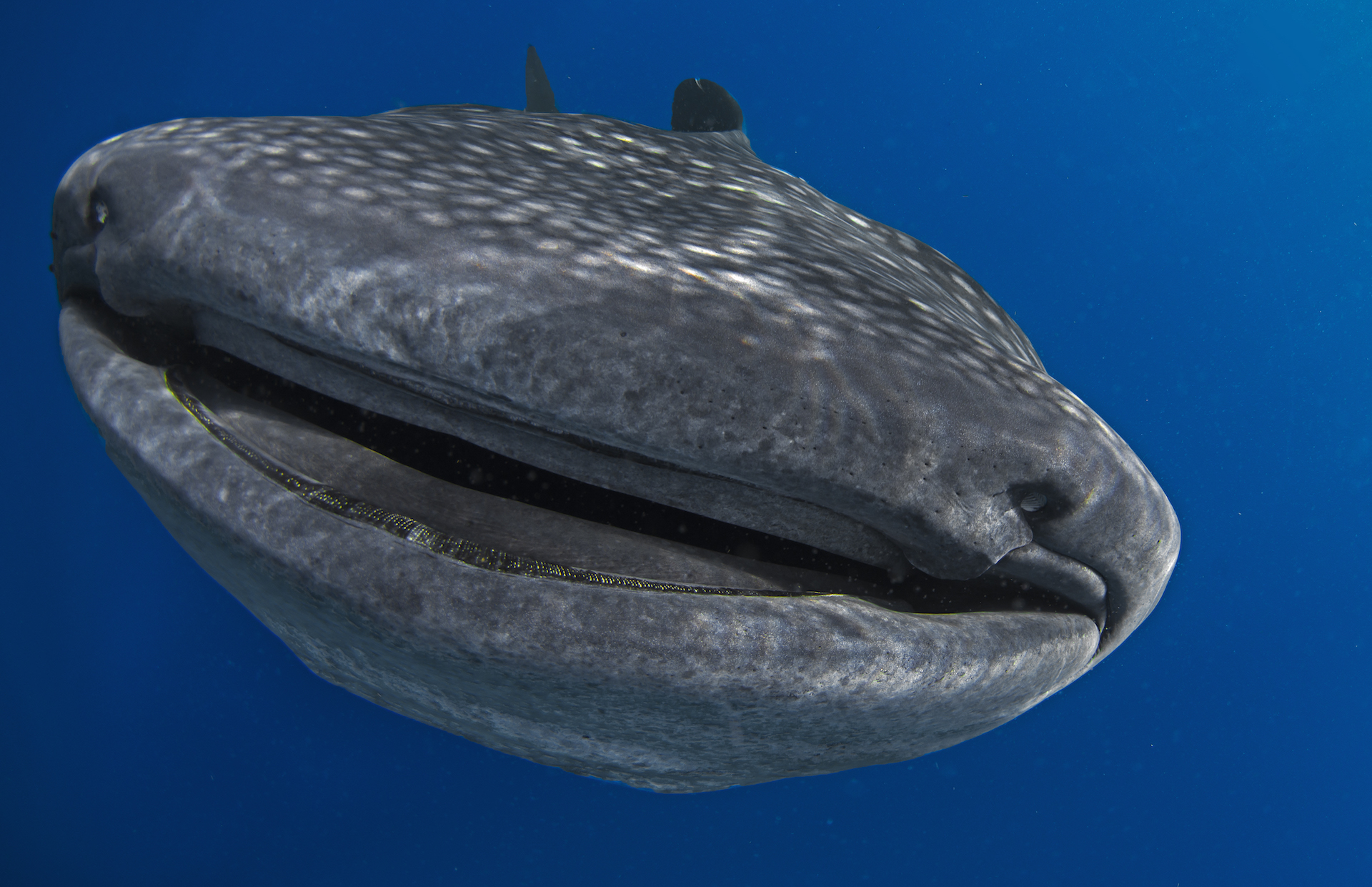 With a flat head and huge mouth that is four to six feet wide, whale sharks seem ominous and menacing. Add to that they have 300 of rows of tiny teeth in their mouth, though don’t appear to use them for feeding. For all its scary features, this huge animal can also appear to be smiling, and is actually not a threat to humans.