To the average person, vipers are synonymous with venom. After all two vipers, the Russell’s and the saw-scaled, are listed among the four most venomous snakes in India. Every one of the 347 species of the Viperdae family has their own signature cocktail of toxins. About 32 species of vipers are found in India, with around five seen almost exclusively in the southern India.

Viper venom works in two principle ways: It affects blood circulation, leading to loss of blood pressure, cardiovascular issues, and impacts the body’s ability to clot blood. The venom also contains protein-degrading enzymes, which immobilise prey and break down proteins, lipids, and acids. Some snakes also contain neurotoxins that impact the nervous system, but these are rare among vipers. It’s a fascinating subject, especially when one considers the complexity of chemicals at work, and the mechanism through which they are delivered.

Terrifying as it may sound, vipers need their venom to hunt, and are not keen on wasting it on creatures they cannot consume, like humans. This is why many human bites are dry, or have scant venom in them. Despite that, any snake bite should be handled with extreme care.

Beyond their venom, many species of vipers are viviparous, meaning that offspring are birthed live (and not born from eggs, like most reptiles). This reproductive quirk is what gives this family of snakes their name. Females incubate eggs within their bodies, until they hatch and exit the mother’s body. 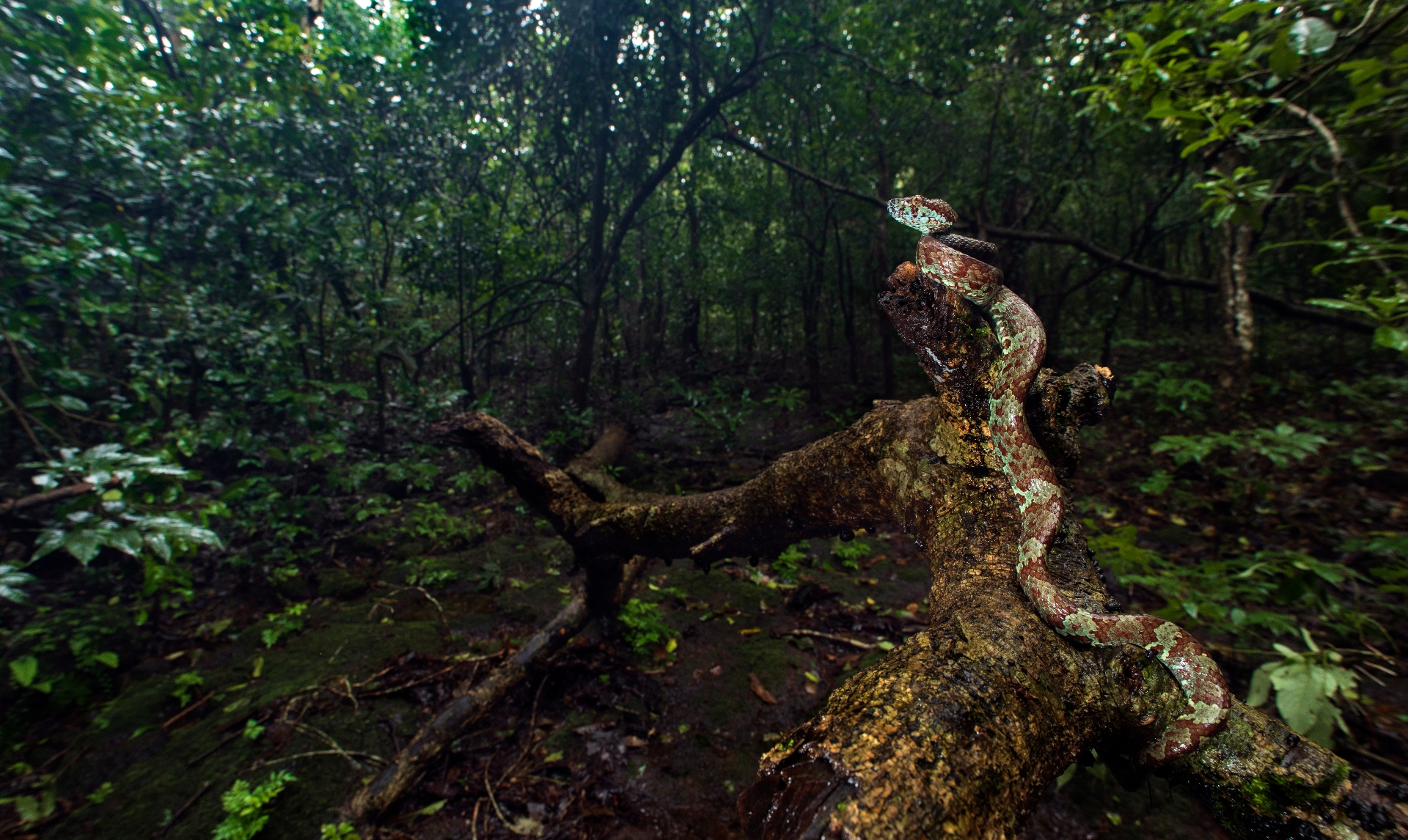 Pit vipers, like this Malabar pit viper, are named after their ‘pit organs’, located on both sides of the head, between the nostril and eye. Though scientists are yet to understand the full working of this organ, we do know that they are heat-sensitive organs that allow the snake to detect warm-blooded animals, which enables hunting after dark. Photo: Pradeep Hegde 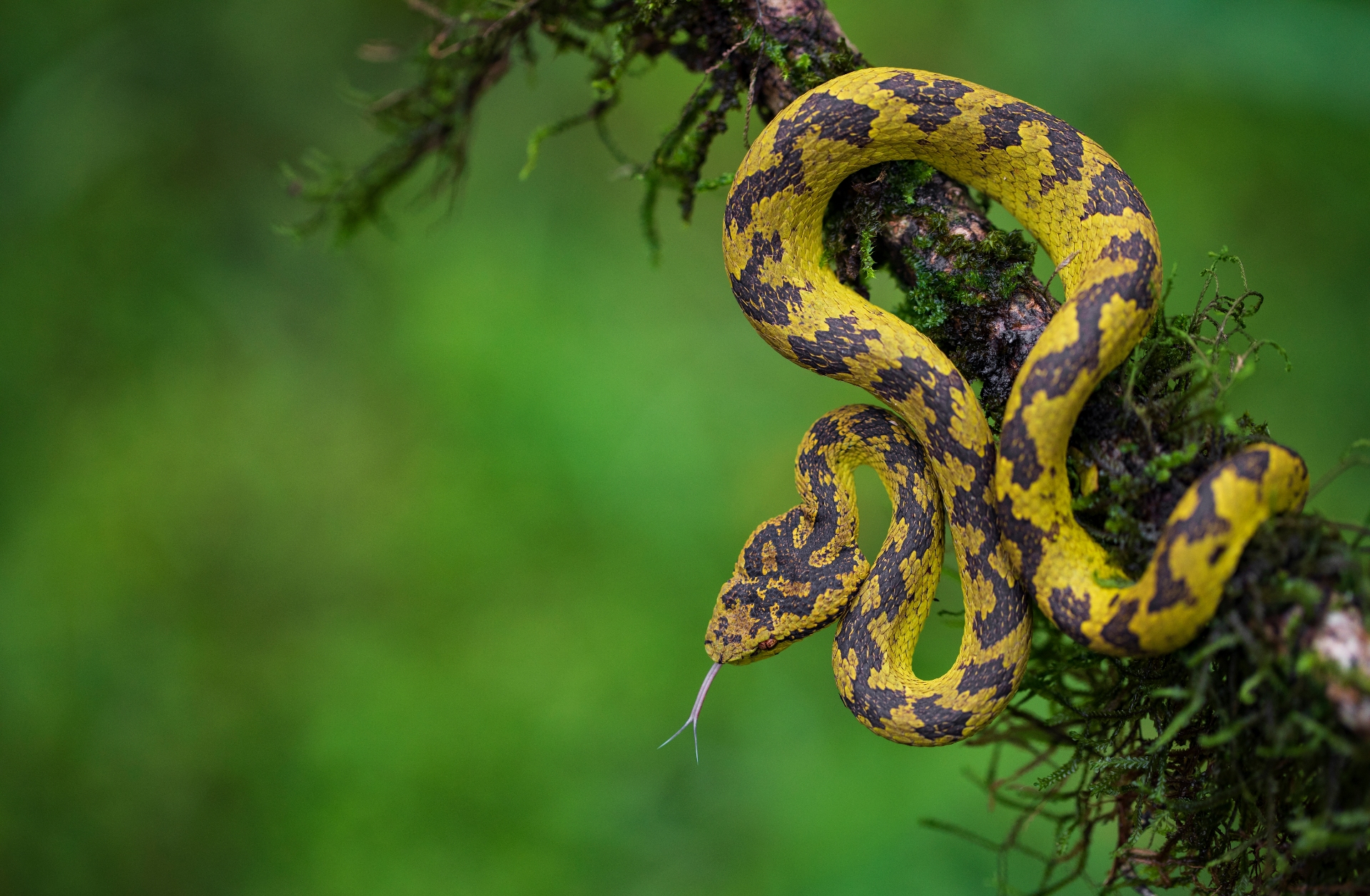 Malabar pit vipers are known to occur in many colour morphs. Green, brown, and a mix of green and brown are common, though yellow, orange, blue, even pink snakes have been photographed. This yellow viper was seen near Sirsi, Karnataka. Photo: Uday Hegde

Horseshoe vipers are named for the horseshoe-shaped (inverted ‘U’) mark on the nape of their neck. They enjoy basking in the sun, perched on rocks covered with moss and lichen. Photo: Gnaneswar CH

Horseshoe pit vipers are generally coloured in shades of brown and grey, and inhabit the upper Nilgiri Hills of Tamil Nadu. The hill station of Ooty, is prime territory for this snake. Photo: Dhritiman Mukherjee

The large-scaled pit viper is largely tree-dwelling, and uses its vivid green camouflage to catch prey. It prefers the high altitudes and cool climes of Kerala and Tamil Nadu. Munnar in Kerala has the right altitude for spotting the large-scaled pit viper, says photographer Uday Hegde, “On the first night itself, our team spotted six different snakes.” Keen to photograph by daylight, he returned the next morning hoping to find the snake again. “There he was, basking in warmth of morning sun, with a full meal in his belly. The yawning was too good to resist.” Photo: Uday Hegde

Large-scaled pit vipers are nocturnal and feed on frogs, rodents, and small birds, in the coffee and tea plantations of the Nilgiri Hills they inhabit. They get their name from their larger-than-normal scales. Photo: Omcar Pai 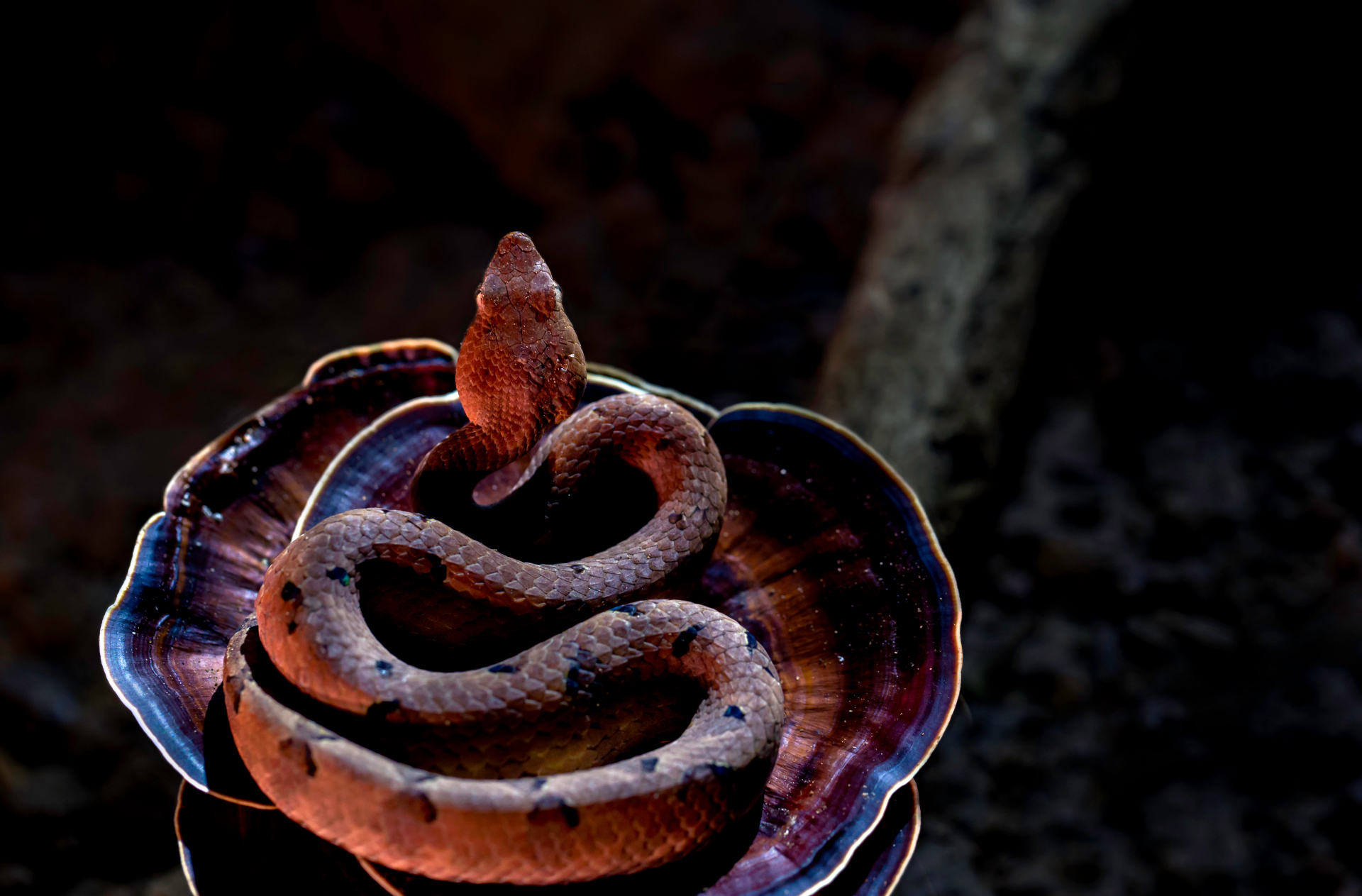 The hump-nosed pit viper hunts at night in forests and plantations of areca nut, rubber, coffee, and cardamom. These elegant snakes are characterised by brown or grey bodies, with dark spots. This creature was spotted during the monsoon, near a waterfall along the Yellapur-Karwar route in Karnataka. “Darkness was just falling when my car’s headlights showed this beautiful sub-adult hump-nosed pit viper sitting inside a mushroom,” recalls Uday Hegde. “I stopped immediately and shot few images using car’s headlight as light source.” Photo: Uday Hegde 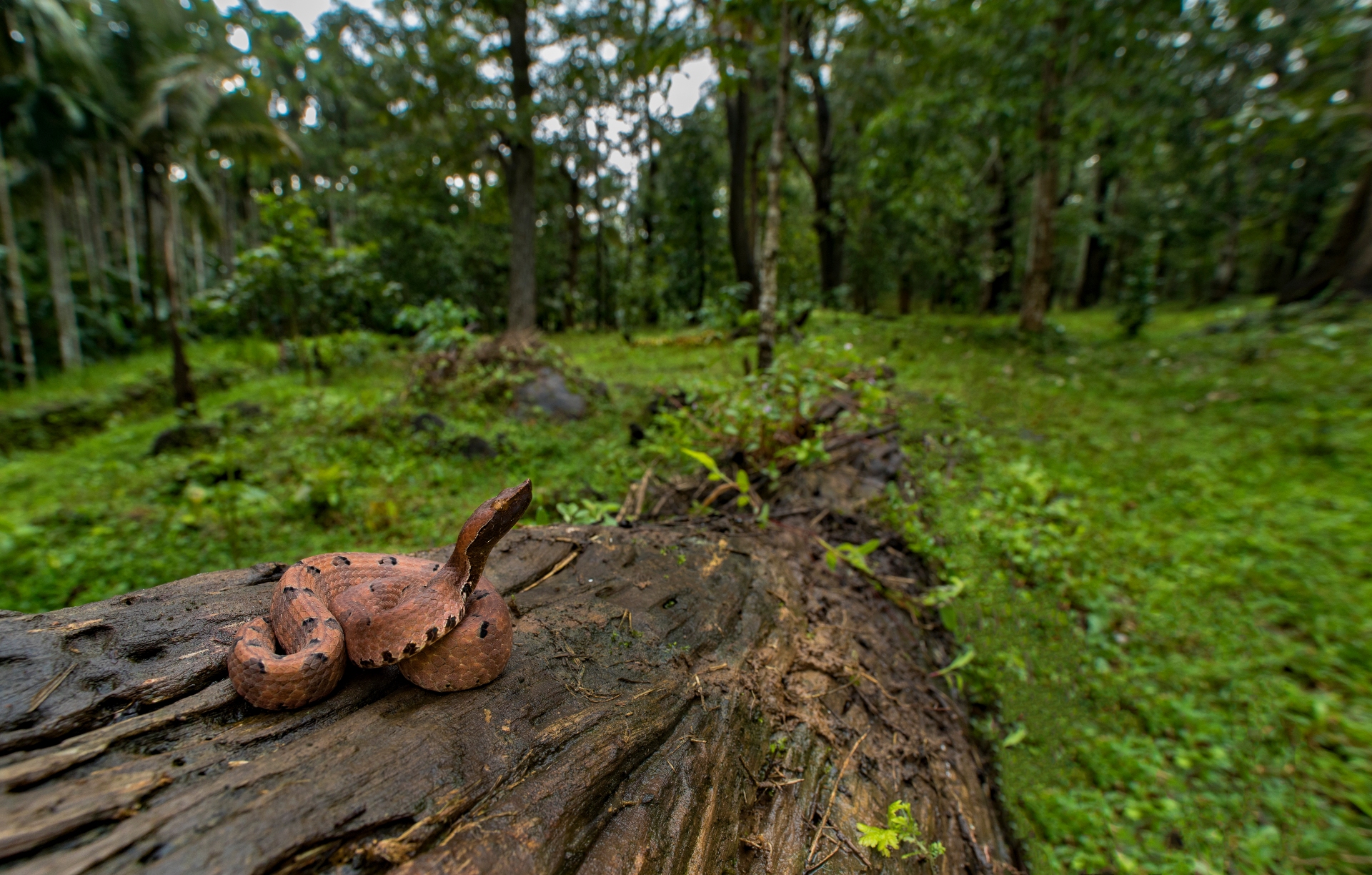 Hump-nosed pit vipers generally hide among leaf litter, making them difficult to spot. During heavy rainfall, however, they perch on fallen trees to escape the deluge, as seen in this image from Sirsi, Karnataka. Photo: Uday Hegde 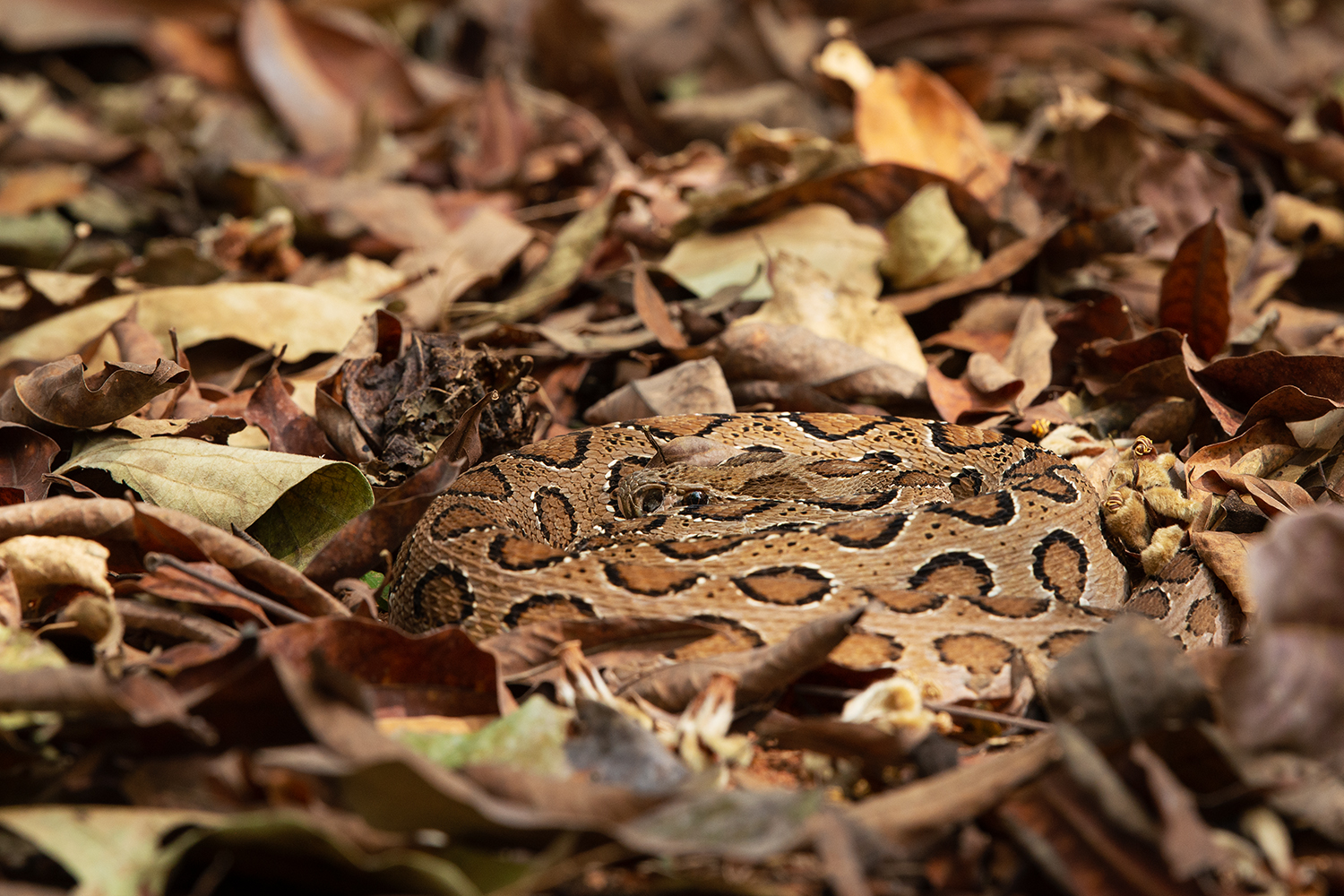 The Russell’s viper is striking to behold, and best admired outside striking range. A member of the Big Four venomous snakes of India, it is found across the country and most of Southeast Asia. An Old World species, it does not have nasal pits, though recent studies indicate they do have heat-sensing abilities. Photo: Shreeram MV

More commonly seen in the plains, the Russell’s viper is known to be a temperamental snake, prone to aggression when cornered. With a stout body with oval black-and-brown markings, it is somewhat similar to the Indian rock python, with which it is sometimes confused. Photo: Dhritiman Mukherjee

Encounters with a Russell’s viper can be deadly, but it seldom attacks without warning. “While the cobra’s defensive posture is a raised hood, a Russell’s viper’s is a coiled up circle,” writes Goan herpetologist and wildlife expert Rahul Alvares on his blog, “The viper’s head sits in the centre of the circle, inhaling and exhaling forcefully, producing two distinct tones of sound for air rushing into and out of its large nostrils. The hissing viper can be almost as loud as a pressure cooker.” Photo: Dhritiman Mukherjee 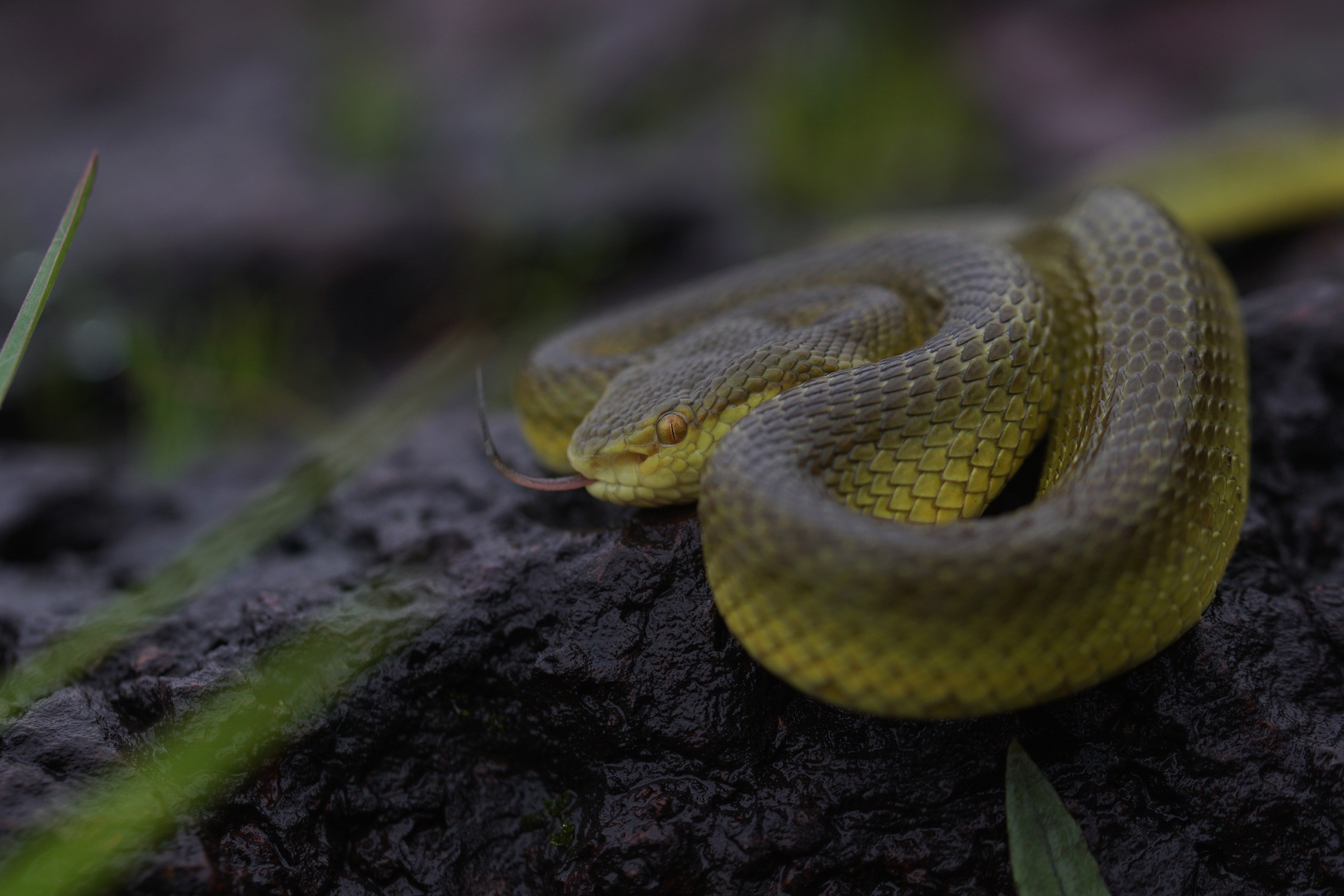 Bamboo pit vipers are rather more innocuous vipers. Named after their alleged fondness for bamboo groves, these snakes are mostly tree-dwelling, but can be seen on the ground, especially near streams, coiled up on rocks. Photo: Omcar Pai

Bamboo pit vipers are nocturnal hunters and like other species of pit vipers, can strike with great accuracy, even on a dark, moonless night, thanks to their heat-sensing pit organs. Photo: Dhritiman Mukherjee

Like the bamboo pit viper, saw-scaled vipers are relatively smaller snakes. Adults grow to a few feet at most, and camouflage expertly with their rocky habitats. Don’t let their diminutive size fool you, though. These little snakes are one of the Big Four most poisonous snakes in India, and known to have an especially hot temper. Photo: Shreeram MV

Under duress a saw-scaled viper coils up and rubs its scales together aggressively, making a sound akin to a saw cutting through wood, which is how the snake earned its name. They vipers are formidable nocturnal predators, known to hunt lizards, small rodents, even venomous scorpions and centipedes. When they aren’t hunting, they will linger in the sun, like this wonderful creature, seen near Tumkur, Karnataka. Photo: Uday Hegde