The Trickster of the Desert: Greater Hoopoe Lark

The greater hoopoe lark is clever. When it sees a predator, it fake falls and pretends to be an injured, easy prey, to distract the hunter from its nest

The temperature outside was hitting 50 degrees C. I was dozing in our air-conditioned SUV while my Saudi student, Mohammad Shobrak, now director of National Wildlife Research Centre, Taif, was driving listening to his favourite Boney-M songs. Fifteen days of futile search in March of the Arabian Bustard in the Tihama region of Saudi Arabia had exhausted our energy. Suddenly a bird darted in front of our vehicle, running briskly like a ballerina on the shimmering sand at mid-day, looking for insects. I asked Shobrak to stop the car as we watched in admiration the hoopoe lark, comfortably thriving in this super-arid region. This was not my first encounter with the remarkable bird — I had seen it in the Moroccan Sahara in 1983. Since the first sighting, I was fascinated and every meeting brought me joy. Later, I saw many individuals in the Thar Desert and Great Rann of Kutch.

Spotting a greater hoopoe lark is not easy as it camouflages perfectly with its arid surroundings. You often only see them when they are in flight, once they reveal their striking black and white wings.

The hoopoe lark now called the greater hoopoe lark (Alaemon alaudipes) has a wide distribution from Sahara to the Middle East, Iran to India. Like many arid zone species, the Indian Thar Desert is the eastern most limit of its distribution. Wherever it occurs, it likes super-arid regions where the rainfall is zero to 200 mm. ‘Zero’ means that it may not rain for many years. It can be found occasionally in the Thar desert. In its vast distribution range, four subspecies have been recognised. In a small part of Somalia, there is a smaller cousin called lesser hoopoe lark (Alaemon hamertoni) found in subtropical and tropical dry lowland grasslands. It is endemic to Somalia, i.e. not found anywhere else in the world. Not much is known about this bird.

But how does the greater hoopoe lark live in such an arid region? Without much trouble, actually. Nature provides adaptations for every type of habitat. It has long legs to keep its slender body above the hot surface, white belly to reflect back the ground heat, and a curved long beak to probe insects and roots amongst pebbles lying on the ground. Like the cheetah, it has long dark lines through the eyes. To avoid predators like lions and hyenas taking away its kill, the cheetah sometimes hunts during the hot mid-day in the African savannah. It has two tear lines running from the inside corners of their eyes down to the outside edges of their mouth. It is believed that these dark marks help reflect the sun’s glare. I found that ashy-crowned finch-lark (Eremopterix grisea) and black-crowned finch-lark (Eremopterix nigriceps) that live in semi-arid and arid regions also have dark markings around the eyes. This is also seen in the case of the horned lark (Eremopterix alpestris) of Trans-Himalayas which also faces a similar harsh glare. In biological terms, when similar qualities or structures such as these evolve independently among different species to serve the same purpose, we call it ‘convergent evolution’.

Whenever it rains in its arid habitat, it is time for breeding of the greater hoopoe lark. I have seen its short aerial display in Jaisalmer in July. To attract a female, the male flutters one to two meters above the ground, exposing its black and white wings, and white tail with outer black feathers. For greater impact of the aerial display, the male produces pleasant soft calls with rising and falling notes of trilled whistles and clicks. Once the pair is formed, the serious business of raising a family starts. 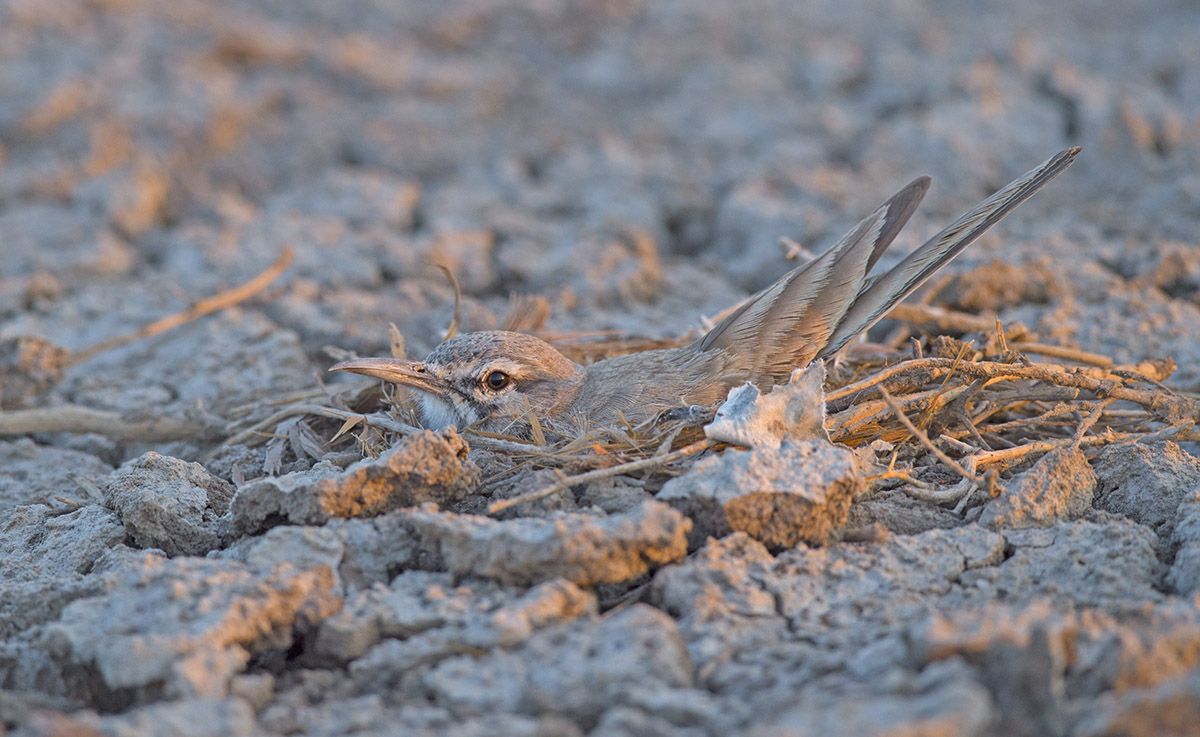 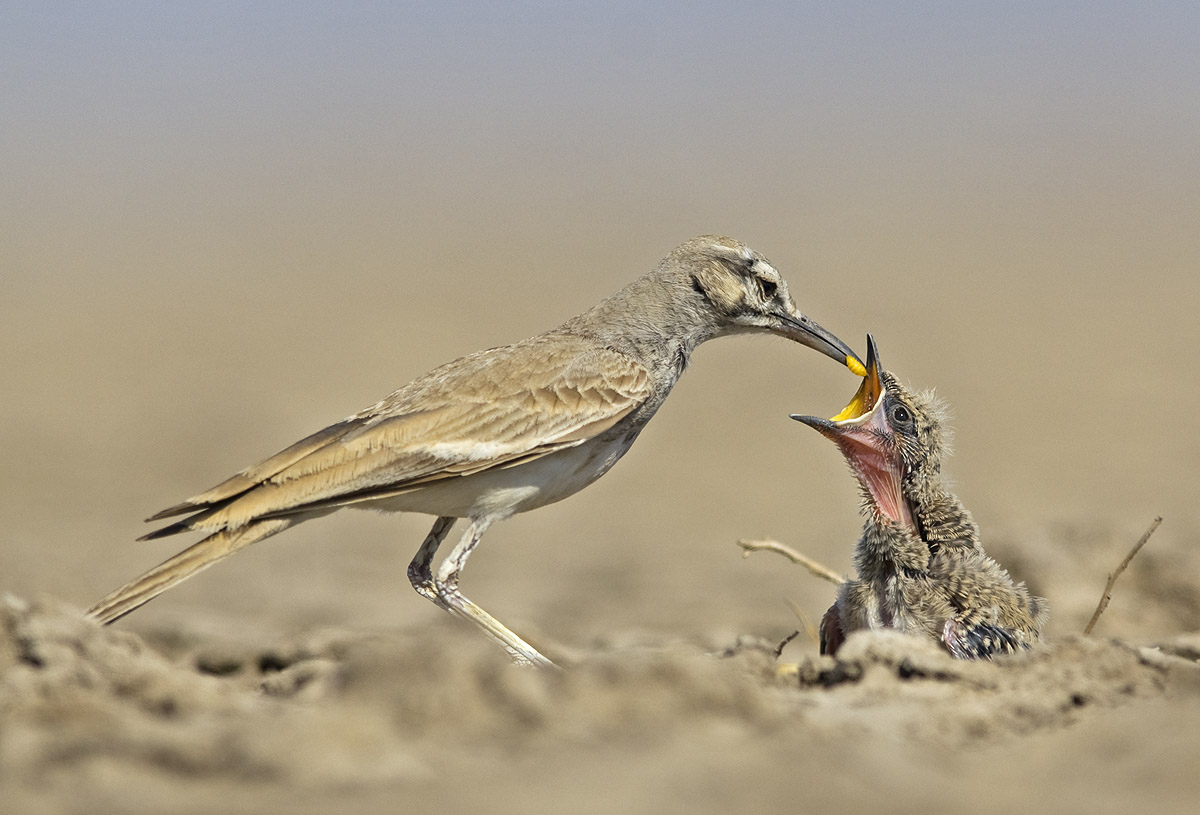 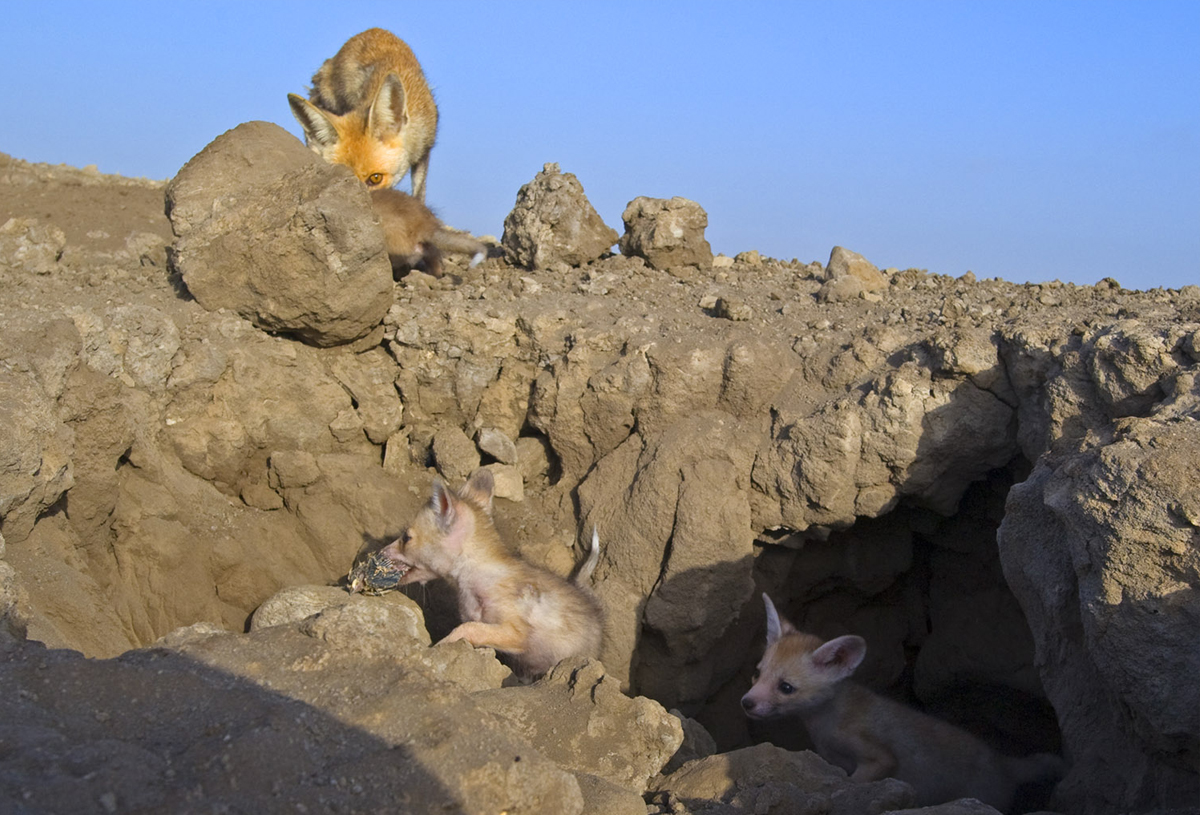 When the hoopoe lark sees a predator, it does a distraction or a broken-wing display to distract the hunter from its nest or chicks. A little away from the nest, the bird flutters as if injured and cannot fly. The predator thinks it has an easy meal and chases the “injured” bird, but when it comes near, it escapes and flies a short distance and falls down again, convincing the predator that it can catch it. This happens a couple of times till the predator is taken away from the nest. Happy that the potential predator is fooled, the bird returns unobtrusively to resume parental duties.

Even for the greater hoopoe lark, sometimes the surface temperature can become unbearable as it may reach 62 oC. On such occasions, burrows of herbivorous spiny-tailed lizards help escape the heat. The lizard is vegetarian so the bird does not fear being eaten. Like good neighbours, the spiny-tail shares its home with a friend in distress. In a research paper published in journal The Condor in 1999, Mohammad Shobrak and other scientists proved that hoopoe larks can potentially reduce their water loss by as much as 80 per cent by sheltering in spiny-tail burrows during the hottest periods of the summer day. They also found that Dunn’s larks (Eremalauda dunni), bar-tailed desert larks (Ammomanes cincturus), and black-crowned finch larks also use burrows as thermal refugia during hot summer days in the Arabian desert.

Off-road driving, as seen in this image from the Little Rann of Kutch, is a severe threat to the bird’s nests and chicks.

India is a blessed country with more than 1,270 species of birds but unfortunately very little work has been done on most species. Take the case of the greater hoopoe lark — all five or six research papers were written on the work done in North Africa or the Middle East. With rising temperature, this little bird may be a ‘beneficiary’ of climate change as its range may expand.

But do we know even its exact distribution range in India? Even the Mughals were more interested in such oddities as the hoopoe lark is illustrated in one of the paintings by famous Ustad Munsur. Let us hope Indian researchers are motivated to work on this species in the near future. I am sure the bird will not disappoint as it may have many secrets to reveal how it survives in the hostile super-arid environment. 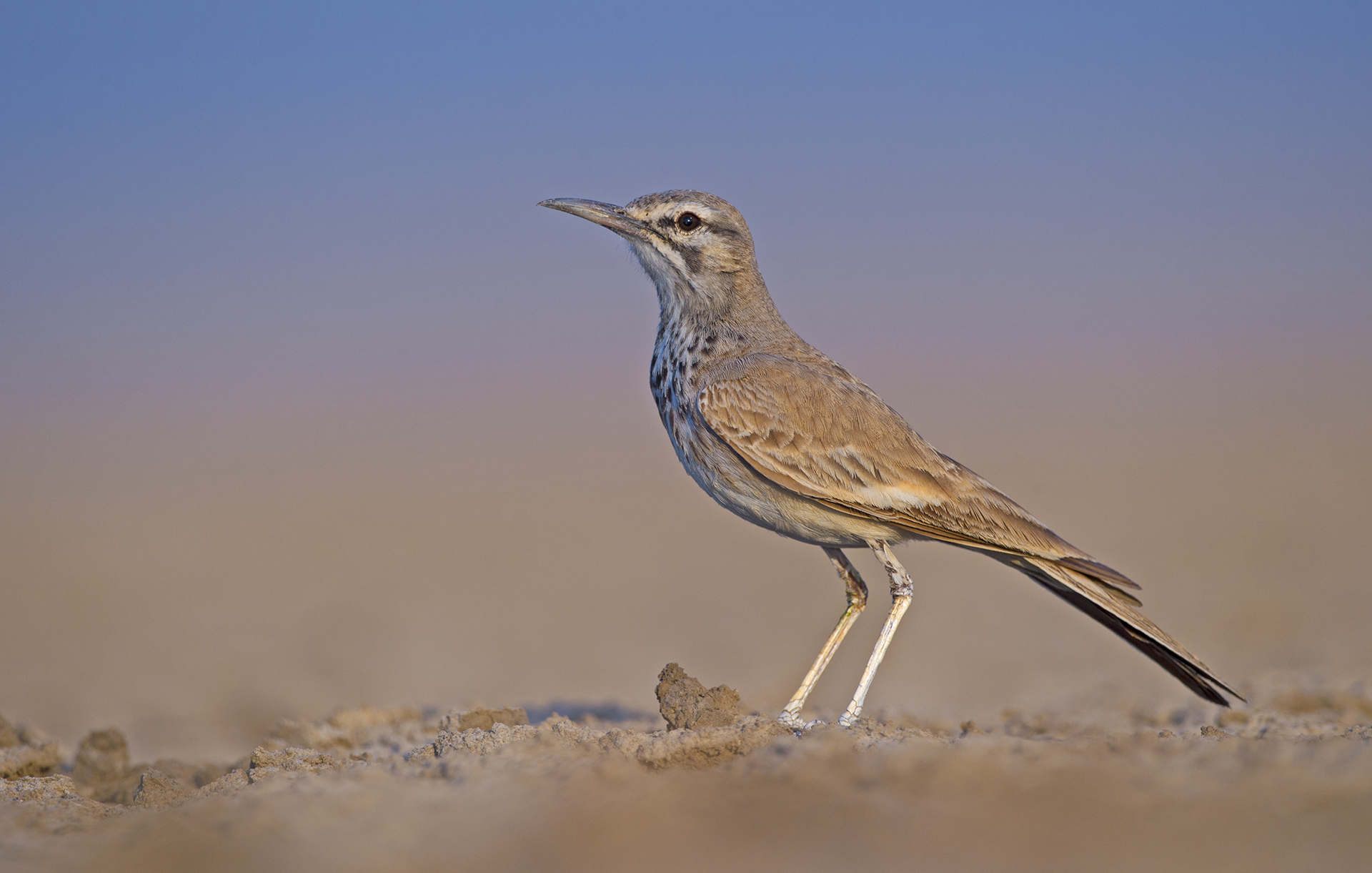 Adaptations such as its long legs and a white belly that reflects heat help the lark survive the harsh climate of the arid regions it inhabits.