Folktales from Maharashtra: The Magic Ring

Animals are a necessary and integral part of everyday life in a village, according to the folk tales and art of the Warli Adivasis 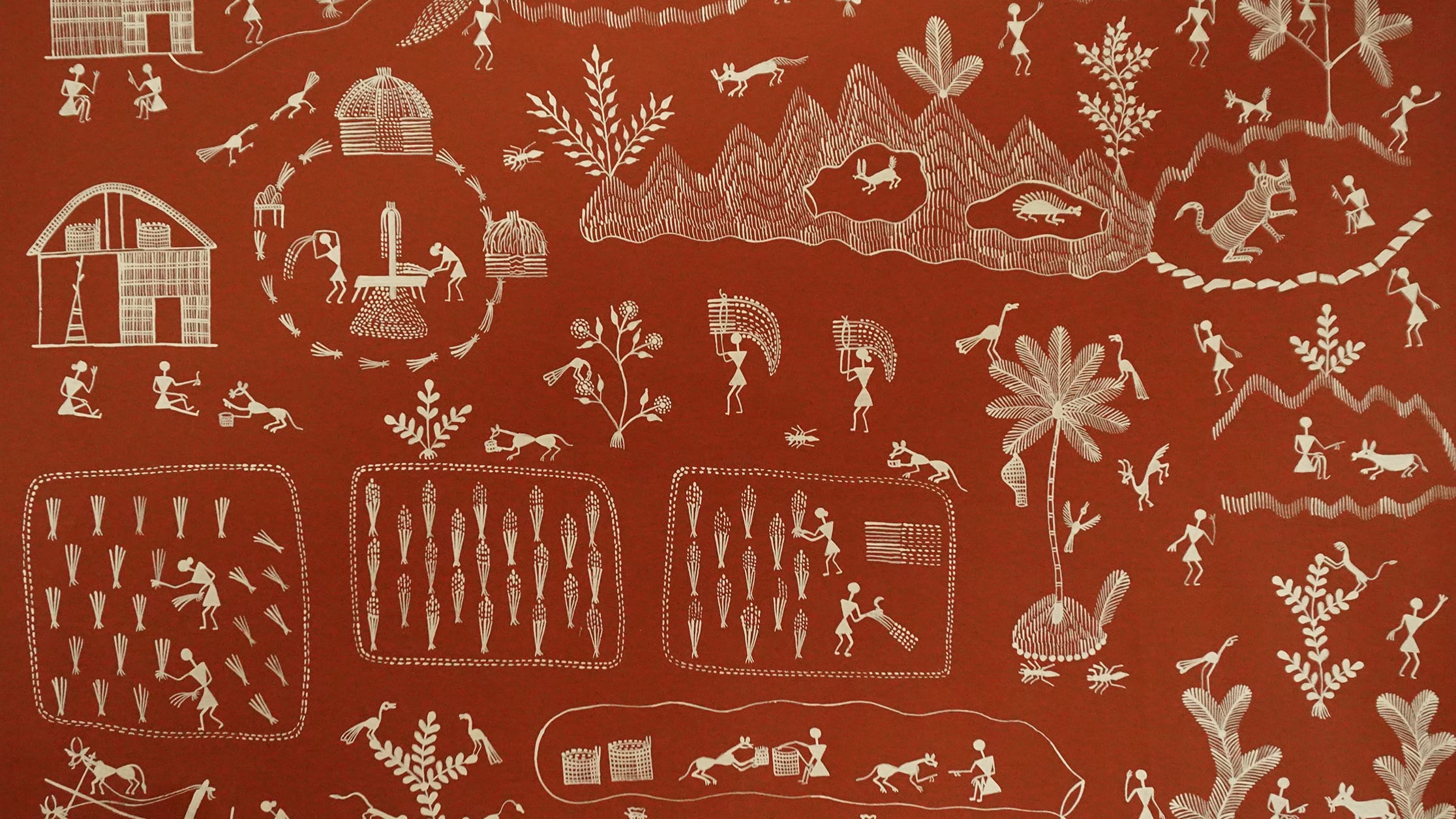 Scenes from everyday life, which include the integration of many different animals, are the main theme of Warli paintings, an ancient folkart form from Maharashtra. Photo: From Warli tribe archives, courtesy Prof. Pradip Prabhu.

The Warlis are Adivasis from Maharashtra. They believe that conserving nature and taking care of animals is not an act of selflessness on the part of humans, but the only way to protect their own future and well-being. This folk tale is narrated by Prof. Pradip Prabhu, former Dean, School of Rural Development, TISS, and founder member of Kashtakari Sanghatana, the voice of the millions of tribals in Maharashtra.

Walking through a forest in search of fruits and berries, a poor man chanced upon a pig being attacked by a tiger.The man helped it escape by driving the tiger away. Filled with gratitude, the pig said, “I am very grateful—you have saved my life today. I must repay my debt to you. Please follow me.”

The man followed the pig who led him to a cave, from which the animal brought out a ring and said, “Take this ring and tie it to the top of your house and good fortune will follow you.” The man accepted the gift, thanked the pig, and made his way home.

As night fell, the man and his wife went to sleep. The next morning, their once empty house had grown in prosperity with sacks of pulses and spices in the attic, and vegetables in the kitchen. They could finally eat their fill and feed their pets. With the family’s good fortune, the couple and their pets lived comfortably.

As weeks passed, onlookers became curious and neighbours wondered at the unexpected good fortune of the household. A crafty villager spied on them and found out about the magic ring. That night, he snuck into the house and stole the ring.

Warlifolk art paintings often depict scenes from their folk tales which are part of the oral tradition passed down the generations. Photo: From Warli tribe archives, courtesy Prof. Pradip Prabhu.

The fate of the house quickly reversed back to its impoverished state. The woman was upset as she couldn’t feed her cat and dog anymore. She said to them, “Please go away, there’s nothing for you here. Find another home!”

The dog asked the cat, “How did our fate change? What do we do?” The cat recalled, “There used to be a ring tied to the roof, but it isn’t there anymore. I think we should find it.”

The duo set out in search of the ring. They searched their village and the surrounding villages, even crossing a trickle of a stream. They were determined to find the ring and take it back to the kind couple.

Soon they came upon a prosperous house. The dog guessed that the house was newly prosperous, because there was a wedding of rats on right next to it, and it was an odd season for weddings. This was surely the thief’s house, they concluded.

As they stood wondering what to do, the cat had an idea. She caught the rat bridegroom from next door. The other rats panicked and pleaded with the cat, “Please, please let the groom go! Please do not harm him.” The dog replied, “We mean him no harm. The cat will let him go in return for a favour. We need the ring that is tied to the roof of the rich man’s house.” The rats scampered onto the thief’s roof, detached the ring from there and brought it to the dog. The cat kept her word and let go of the groom. The wedding celebrations continued with merriment.

As the cat and the dog made their way back with the ring, it began to rain heavily and frogs croaked joyfully all around them. Water levels at the trickle of a stream they had crossed earlier had risen, and it had become a torrent. They had no choice but to brave the current. The cat jumped in first and the dog followed. As they were crossing the gushing waters, the ring slipped out of his mouth. Once they reached the shore, they had to think quickly about how they would retrieve the ring from the depths of the stream.

Soon the rain stopped and they spotted a wedding ceremony of river frogs nearby—a common occurrence during the rains. They repeated their trick, catching hold of the bridegroom. The other frogs begged, “please let our groom go, please do not hurt him!” Now it was the frogs’ turn to fetch the ring from the depths of the stream in return for an unhurt groom. They dived into the stream and brought the ring out. Once the dog had the ring in his mouth again, the groom frog was released, and the wedding party resumed.

Without any more untoward incidents, the cat and dog reached their home. The cat climbed to the roof and tied the ring where it used to be. The woman was happy to see her pets again. This is how the cat and the dog returned the ring to their house, and brought prosperity back to the family.

The Adivasis believe that cats, dogs, pigs, rats and frogs are the cause of prosperity. Every creature, big and small, has a role to play in making the world a better place for all to live in. We may not see it all the time, but if we care to look and learn, we will find that without them, our chances of survival are at risk. Through this tale, community elders teach the next generation that animals should be considered part of the family, and are also part of the family’s prosperity. Taking care of them does not eat into one’s wealth; it is not a loss to have them.

Lessons in Love (and Housekeeping) from the Malabar Trogon

That Worm in your Garden could be a Snake