Avian Windfall at Todgarh-Raoli and Kumbalgarh

Two underexplored sanctuaries in Rajasthan reveal over 12O bird species over four days, proving they have great potential to be developed as birding destinations 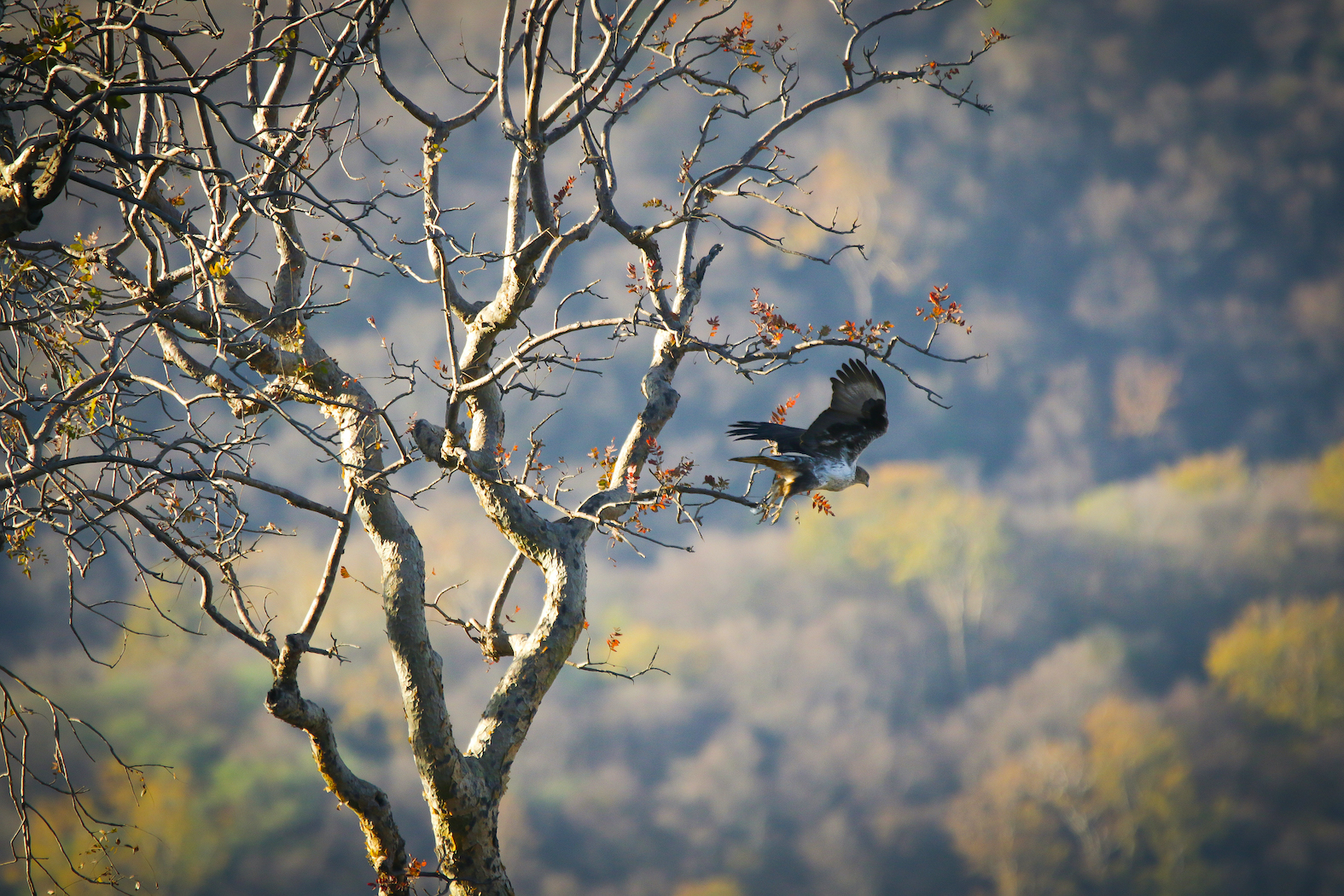 A hyena had just bolted into its cave on a rocky outcrop in Rajasthan’s Kumbalgarh Wildlife Sanctuary. There was nothing to do but wait for it to remerge. Or so I thought, as I settled down on a hillock, facing its den.

As the orange evening sky began to turn pink, a pandemonium of rose-ringed parakeets flew overhead, their rapid and repetitive “tui tui” calls reverberating across the forest. A second company followed soon after. Then a third, and a fourth. And then, I stopped counting. I lay down on my back, watching batch after batch of birds, each numbering 15 to 30 individuals, fly past every 10 minutes for the next hour. It was almost as if the birds were warning the hyena of our presence — “They are still here. They are still here” — because it stayed put in its den.

A group of birding enthusiasts wait for a hyena to remerge from its den on a hill in the Kumbalgarh Wildlife Sanctuary in the Aravallis. Photo: Rohit Kumar An oriental honey buzzard takes off from its perch in Rajasthan’s Todgarh-Raoli Wildlife Sanctuary. These buzzards can be distinguished from other raptors by their pigeon-like heads. Photo: Mayank Bohra

Smaller prattles of plum-headed parakeets also flapped by us. Of the three species of parakeets found here, only the Alexandrine didn’t fly by. I watched intently when a common kestrel soared over the outcrop. Rising gradually with the thermals, the chestnut-brown bird, measuring around 30 cm, took offence and gave chase when an oriental honey buzzard, almost twice its size, decided to survey its domain.

In a lovely sonnet entitled “The Windhover” poet Gerard Manley Hopkins refers to the kestrel’s remarkable ability to hover mid-air while hunting prey. After it was done chasing the buzzard, it exhibited exactly why is it is also known as the windhover.

We were a motley crew of wildlife photographers, students, biologists, and a writer exploring the birds of Kumbalgarh in Rajasthan. A couple of days earlier, we’d spotted a pair of oriental honey buzzards at the nearby Todgarh-Raoli Wildlife Sanctuary. Identifiable by their pigeon-like heads, the raptors had drifted over a valley before settling down on a tree.

Though these owls are nocturnal, they are occasionally seen resting on tree branches or hollows during the day. Disturbed from its slumber, a curious spotted owlet (left) engages in a staring competition with the intruders (left). A pair of Indian scops-owls (right), identified by their conspicuous ear tufts, doze inside the hollow of a tree. Photos: Dr Amit Kotia (left), Dr Sumit Dookia (right)

Another pair of raptors caught our eye as we trundled along a forest path under the noonday sun in Kumbalgarh — two adorable Indian scops-owls snoozing in the hollow of a tree. Occasionally, the birds with conspicuous ear tufts, would open their eyes to check on us, slinking back into the hollow when we approached too close.

Further ahead, not unlike the kestrel, a black-winged kite hovered over the shimmering waters of a crystal clear, blue-green lake. The bird’s black wingtips stood in sharp contrast to its white plumage, and it displayed the dexterity that would put the best helicopter pilots to shame.

Later that night, within the precincts of the nearby Parshuram Mahadev Temple, we spotted a brown fish-owl, almost twice the size of the scops-owls, and measuring about 40 cm. Patiently perched on a well, it suddenly swooped towards an adjacent pond and returned with a catch.

Sighting a regal crested serpent eagle surveying the forest from the branch of a tree, reinforced my belief that raptors excite birdwatchers in the way spotting a tiger excites a safari-goer. Whenever someone in the group called out, “raptor, raptor, raptor”, I’d raise my head towards the skies in anticipation. It was only after someone pointed to a speck in the sky that I’d know exactly where to point my binoculars.

A long-tailed shrike (left) and a white-throated kingfisher (right) wait patiently for prey. While the shrike primarily feeds on lizards and insects, the kingfisher will take crustaceans, snakes, fish, and frogs. Photos: Mayank Bohra

I cannot fathom how a Himalayan griffon, flying over a kilometre up in the sky, can be identified by the mere outline of its wings. But I have learnt to distinguish a stork from a raptor, even if it soars on thermals like a bird of prey. A resident of agricultural fields and wetlands, we saw a woolly-necked stork circle the skies, not too far away from the griffon, above Raoli Lake near the Raoli Forest Rest House.

Aquatic birds, led by 300-odd common coots, also crowded the lake. Common and white-throated kingfishers perched on trees around the waterbody keeping a sharp look out for a chance to grab a quick meal in the water, while green bee-eaters flitted nearby and plucked insects out of thin air. Grebes, ducks, pochards, pintails, shovelers, and gadwalls paddled with the coots. The diversity of pochards in a wetland indicates its health, wildlife biologist Dr Sumit Dookia, who was accompanying us, pointed out. Active from dawn, the calls of the water birds would reach a crescendo at dusk, when egrets, storks, and herons settling in for the night on trees around the lake joined the ruckus.

Early winter mornings deliver fortuitous sightings of a variety of birds such as the gadwall (left) at Raoli and the surrounding dry deciduous forests. Photos: Rohit Kumar

Over the next few days we discovered that good rainfall over the monsoon months of 2019 had meant that the wetlands were rich in birdlife in December. So were the farms. Indian rollers were at their acrobatic best here, revealing the brilliance of their blue underwings as they flew from one tree to another. Babblers and bulbuls did the same, drawing attention to themselves with their loud calls. A large flock of yellow-footed green pigeons nibbled away at the fruits of a Ficus tree. A drongo with a white belly was a pleasant surprise for me, since I had only ever seen black ones before. I got distracted watching some parakeets chase down a mob of mongooses trying to raid their tree hollows. By the time I caught up with my birding group, they were huddled around something on the ground: Chicks of a common snipe that had camouflaged themselves so well in the muck that I couldn’t see them even from a metre away.

Usually found in deciduous forests, the white-bellied drongo (left) is a fearless and aggressive bird that doesn’t hesitate to take on birds larger than itself when threatened. Staying still and merging with its surroundings, the common snipe uses its excellent camouflage to protects itself from predators. Photos: Rohit Kumar (left), Anirudh Nair (right)

While we didn’t see any red spurfowl, known to be present in these hills of the Aravalli ranges, grey junglefowl sped through the dense undergrowth every now and then as we walked along a trail in Todgarh-Raoli. Dr Dookia informed us that the sanctuary is the last distribution point in northwest India for these wild ancestors of the domesticated fowl. The sighting of an Indian black-lored tit flitting about on a tree in Kumbalgarh stirred the group to fish out their bird guides. We were all thrilled to learn that it was an extremely rare sighting of a bird not known to occur in these parts of Rajasthan, with the nearest sighting recorded previously from the Mount Abu Wildlife Sanctuary.

Collectively, our group spotted over 120 species of birds across four days at the Todgarh-Raoli and Kumbalgarh Wildlife Sanctuaries and the surrounding areas. Dr Dookia is convinced that these two underexplored sanctuaries have great potential to be developed as excellent birding destinations. “The forest department should develop trails, especially around the fringes of these sanctuaries, where a mixed habitat comprising wetlands and forest is favourable to sight birds. Locals must be trained as guides so that the biodiversity of the sanctuaries translates into income for those living around it,” he suggested.

After the calls of the lake birds had subsided, we heard the trumpeting of a pair of sarus cranes, well into the night. The old caretaker of the rest house told us that he has started seeing these cranes here only in the past five or six years.

I wondered if the tranquillity offered by these undisturbed wetlands is what brought the tallest flying birds in the world here. Would they go back to wherever they came from if birders descended on these underexplored jungles looking to record sightings? These thoughts churned in my mind, on the backseat of a bus to Udaipur, as I considered what a pleasurable activity birding can be. The sheer diversity of avian life in this region provides each visiting birder a unique experience; and a story that will never be the same as the one before it.

On a Wing: Titli Utsavs in Uttarakhand