Shine a Light: A Saturday Night Moth Party in Delhi

The moths of Delhi’s Asola-Bhatti Wildlife Sanctuary have their own loyal fan base, and shutter-friendly paparazzi

It’s a Saturday night and about 20 minutes from the hip neighbourhood of Greater Kailash in Delhi, a group of about twenty gather in a city forest for an unlikely party. The opening act is a Power Point presentation, followed by the main event — huddling around a white sheet lit by a bulb, to attract moths and other nocturnal insects. Some hyperactive bugs go straight for the viewers’ eyeballs, a few quiet ones sneak inside T-shirts, but the audience seems unperturbed. At the centre of the sheet is the main attraction, a large brownish-yellow creature — a monkey moth. As a photographer closes in for a shot, another moth lands on his collar. “Stay still!” someone exclaims. Lenses now point at his neck. Amidst the excitement, nine-year-old Janhavi Yadav stands with her arms stretched out, barely inches away from the sheet that is now swarming with insects, “Come to me, moth! Come to me!” she says. It is just 8.30 pm at Asola-Bhatti Wildlife Sanctuary, a protected area on the Delhi-Haryana border, and the party has begun.

The owl moth has a striking pair of eye spots on its wings, ideal for scaring away predators. (Cover) A captive audience of adults and children admire the insects attracted to the well-lit white screen they’ve gathered around at Asola-Bhatti Wildlife Sanctuary. Photos: Courtesy Conservation Education Centre

Asola-Bhatti Wildlife Sanctuary is one of the last surviving forests on the Delhi Ridge, the tail-end of the Aravalli forests that run through the city. With over a 100 to 250 species of birds, howling golden jackals, nilgais, monsoon insects, and butterflies, the 6,874-acre forest is a wild orchestra. But until 2005, large stretches of it were red sand quarries called the Bhatti Mines. In 1991, after seven labourers died in a quarry, the Delhi government shut it down and declared it part of the adjacent Asola wildlife sanctuary. It also entrusted Conservation Education Centre (CEC) of the Bombay Natural History Society (BNHS) with the task of building a three-acre butterfly park. Today, though the lush butterfly park is in Delhi’s backyard, it feels like the city cannot touch you here.

Our motley group has gathered at the sanctuary to celebrate National Moth Week, a worldwide citizen science initiative that is scheduled every year in the last week of July. The hope is that the collective activity will help the average citizen recognise the magnificence of the butterfly’s much-maligned cousin. Just like butterflies, moths belong to the scientific order Lepidoptera which means scaly-winged. A moth’s wings are made up of soft, tiny scales, stacked side-by-side, like roof tiles. They are so delicate that they’ll turn to dust if mishandled. Moths are also key pollinators, and indicators of environmental health, but most importantly, they are an abundant food source for other birds, insects, bats, frogs, and lizards. “Without moths, an entire ecosystem can collapse,” says Sohail Madan, centre manager at CEC, and the man who has led the creation of the butterfly park.

In 2012, National Moth Week was first started by the Friends of the East Brunswick Environmental Commission, an environmentally conscious non-profit organisation in the US. Fuelled by the excitement on social media, it has now spread to celebrations held in over 40 countries. Every year, moth-spotting enthusiasts, or “moth-ers” gather around parks, sanctuaries, neighbourhoods, and gardens to huddle around backlit sheets. They share images of moths on the Internet, which feeds into a large, never-created-before, cross-country database. Inspired by this, three years ago, when Madan introduced the idea of moth walks in Delhi, few people showed up. Today, the growing enthusiasm still surprises him. 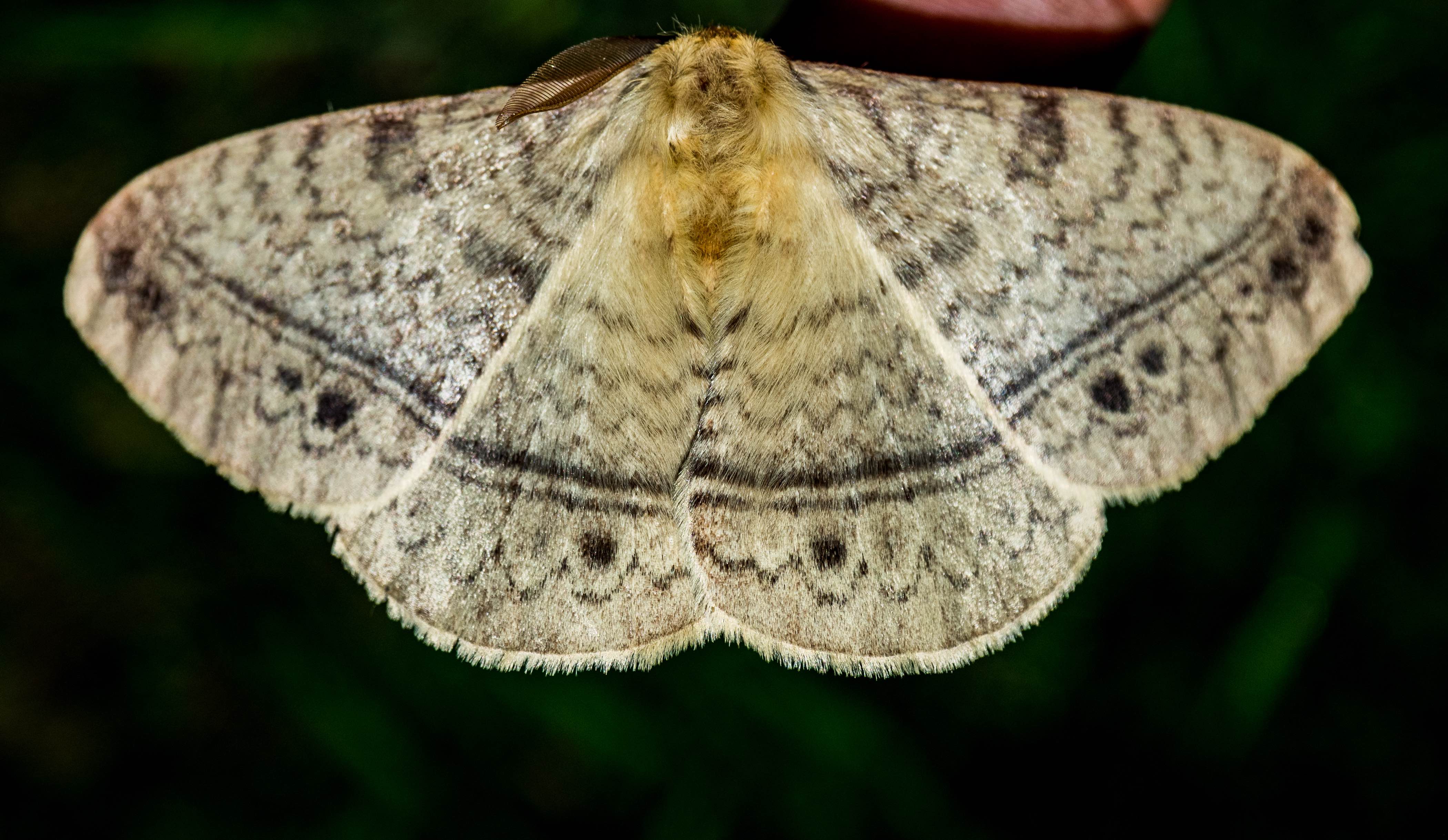 With a wingspan of about 8 cm, the monkey moth is one of the larger moths spotted in and around Delhi. Males have a furry head somewhat like a monkey’s, giving the species its name. Photo: Courtesy Conservation Education Centre

At the Asola-Bhatti Wildlife Sanctuary, an enthusiastic Lakhan Kohli, armed with a flashlight and magnifying lens, circles around the sheet. Sometimes he slips under it swiftly and emerges on the other side. Kohli documents moths and butterflies at the CEC. Today he rapidly dishes out complex tongue-twisting scientific names with great flair. “Local names please!” says a participant, and that is when the stories begin. A tiger moth clearly gets its name from its black-and-yellow stripes. A peppered moth — black-and-white wings, with dark speckles — looks like it has been dusted with pepper. An Eretmocera impactella moth is so tiny that it fits on the tip of the little finger. Kohli holds up his magnifying glass, revealing an intricate black and yellow pattern. Madan tells us that textile designers sometimes study moths at CEC and reproduce their patterns on saris.

“When was the last time you saw a moth?” Madan, asks the crowd. Because moths seem so abundant and commonly found, their loss hasn’t been scientifically recorded or tracked. For instance, entomologists, or scientists who study bugs, have declared an insect apocalypse. However, the idea that insect populations may be on a decline was first noticed through everyday observation — people found fewer insects dying on their windshields when they drove through highways. Studies that declared that 40 per cent of insect species are likely to become extinct globally in the coming years, followed later. Today, it is popularly known as the windshield phenomenon. “Something similar is happening with moths,” says Madan. As a child, Madan could not imagine sitting on the porch or balcony in Delhi during the monsoon with lights on — moths, attracted to light, would swarm the place. “These days, you can leave the doors and windows wide open and sit with ease,” he says. And that worries him. Environmental changes, growing light and air pollution, and destruction of habitats threaten their survival, but there is very little information to raise alarm. Unlike butterflies, moths haven’t been studied widely simply because they are nocturnal creatures, up and about when we are asleep. According to Madan, the last comprehensive book on Indian moths was written by a Britisher, GF Hampson, between 1894 and 1898, more than one hundred years ago. Every time Madan and his team find a rare species of moth, it takes months to identify it. “Moths are disappearing at a rate faster than science can study them,” he says. These bugs are grossly misunderstood too. The Power Point presentation earlier was a big myth-buster: moths are not simply ugly and brown; they are not bad omens; and we really need to move past the negative pop-culture connotations they are associated with in scary movies like The Silence of the Lambs.

As conversation about moths among average citizens builds, so does the interest in these scaly creatures. Sanjay Tiwari, owner of a food manufacturing company, is a regular at moth events. After attending a couple, he built his own little screen in his garden in Gurgaon where he documents the moths he sees. “The world of moths is mysterious. You sit late at night and wait for them to turn up. There is very little known, and there is so much to learn!” he says with great enthusiasm. He regularly sends images of moths over WhatsApp for Madan to help identify. Neha Chopra, mother of two homeschooled children, is always looking for interesting events where her kids learn through practical experiences. Being a part of this citizen science project seemed like a great opportunity. “A couple of weeks ago we saw a beautiful, green moth and immediately sent a picture to Madan. He said it was the Vishnu moth, and an extremely rare one too. We all were very excited,” she says. 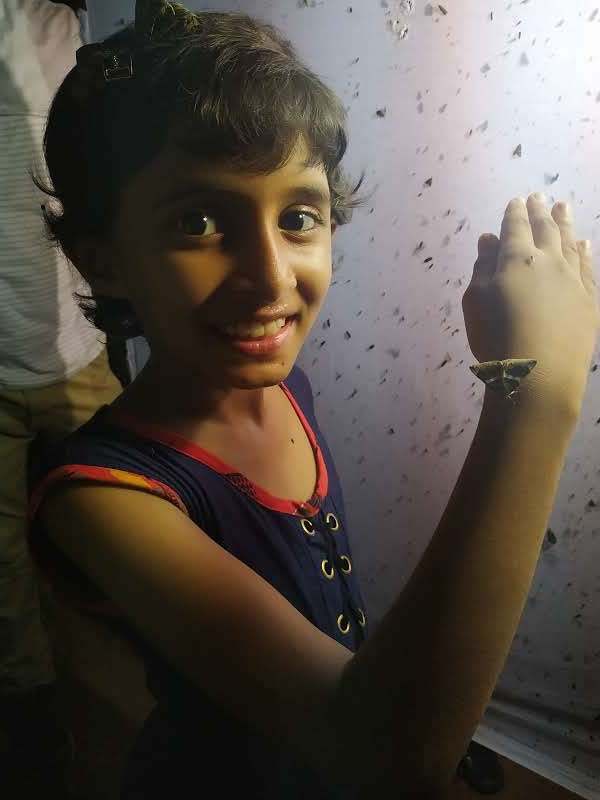 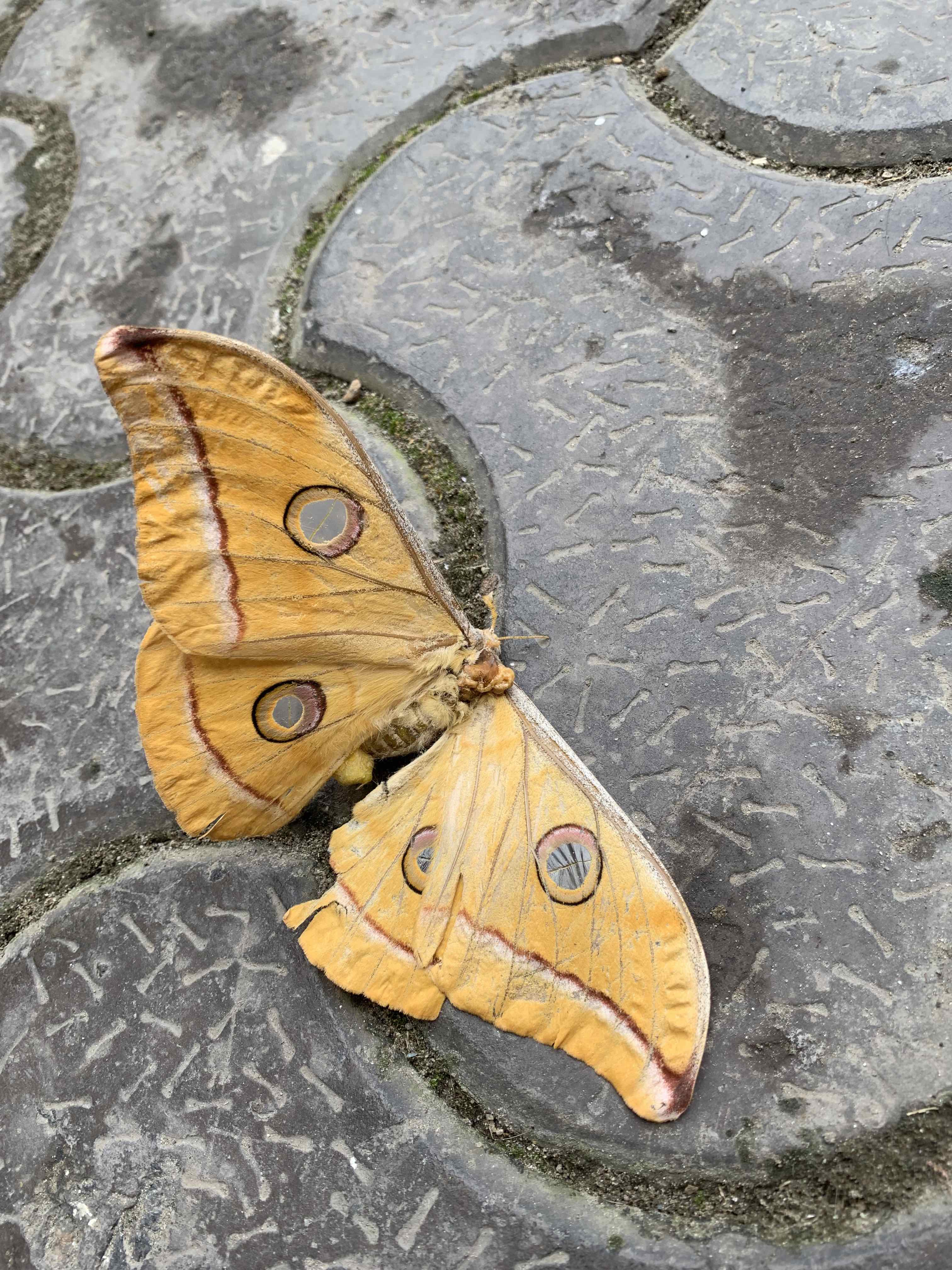 (Left) Janhavi Yadav is a nine-year-old moth-enthusiast. Not only is she comfortable in their presence, she’s also learnt to recognises several species. Photo: Courtesy Conservation Education Centre (Right) The tussar silk moth is native to India. Silk is extracted from its cocoon in the wild, after the moth has emerged, to produce tussar silk fabric. Photo: Ipshita Singh

As the evening session comes to a close, Janhavi is squealing with excitement. Several moths have landed on her arms. The group is exchanging notes, asking Madan and Kohli where they can buy lights and set up similar screens, and saving dates for the next event. For Madan, at a time when our natural world is struggling to survive, this enthusiasm for moths is hope. It is children’s questions and curious excitement that keeps him interested. “We may not be able to save what is lost, but changing the perspective of one person can go a long way,” he says sanguinely.

By now we can hear the guttural call of a nightjar from a distance. A hungry praying mantis and a dragonfly have turned up on the screen too, alongside the sheet packed with insects and moths. It’s a feast that these predators are waiting to pounce on, if only the crazy moth-ers would leave.